There were great comments on the previous two posts, about my first time getting blind drunk and my first house party.
Sherry had an interesting point about how we tell our parents about all the sneaky stuff we pulled long after the statute of limitations is up and we can no longer get grounded.  And as it happened, she just happened to have written a post on that particular subject.  You should check it out, here.
I definitely remember having those conversations with my parents, years after I was out of the house.  We’d be sitting around and telling stories over drinks and something would come up and it would be like… “Oh yeah… you guys didn’t know about that…”
Not that I really did all that much that needed covering up…
The thing about my little group of buddies is that we balanced each other out.  Rik and John used to really go out drinking and carousing and tearing up the town.  I had never drunk more that a beer or single glass of wine until near the end of my senior year.  So as we all got together, I probably reined them in some, they loosened me the hell up and we all kind of met in the middle.
Honest to God, the worst I ever did was steal pumpkins at Halloween.
Yeah… a real hellion, I was.  But as usual, there’s a story.
There’s not really a lot to do, out where I grew up.  So Halloween provided quite an opportunity for mischief.  I don’t know who decided that this would be our group activity, but over a couple of nights, several of us drove out into the night, in search of pumpkins to steal.  And yes, we had to drive… we were out in the country… houses were NOT close together.
Most of the heists went uneventfully.  We started small, but the next thing you know, we were prowling for the big ones.  There was one house by the school that had a whole slew of them out on the porch.  This house was set down from the road, about 50 yards away.  There were four of us on this excursion: Rik, my brother Ed, John, who was driving his 2-door Camaro, and me.
Rik and I got out of the car and approached the house.  I stopped and ducked behind a big boulder in the yard and Rik went up to the porch and nabbed a pumpkin about the size of a beachball.  As I saw him running toward me, I could also see the door fly open and the homeowner come charging up the hill behind him with a shotgun.
I know I just typed “with a shotgun” because that’s how I always remember the story.  But as I look at it now, I’m thinking, “Holy Fuck, the dude had a SHOTGUN!!  He could have killed our asses!”  I don’t know why that didn’t strike me so much at the time… probably that “indestructible” vibe that teenage boys have.
Anyway, I called out to Rik, “Look out, here he comes!”  I think Ed was yelling the same thing from back up at the road.
Fulfilling my role as a good wingman, I waited for Rik to run by me, then turned to follow.  That turned out to be a mistake.
We get up to the car, Mr. Homeowner churning up behind us, and Rik tosses the pumpkin into the back (where Ed was) and then jumps into the front seat and puts the seat back.
“Holy shit!  Where the hell am I supposed to go?” I scream to myself.  Somehow, I jam myself between the front seatback and the doorframe and squeeze my ass into the back seat.  John stands on the gas and fishtails all over the road, barely missing Mr. Shotgun Wielding Homeowner as we tear off into the night.
We were damned lucky we didn’t end up with our pants full of buckshot.  And you’d think we’d have learned our lesson.  But sadly, no.
All summer, and every day on the bus to school, we drove by this giant pumpkin growing out in a field.  Thing must have been waist-high.  It really was The Great Pumpkin.  So naturally, we decided we had to grab it. 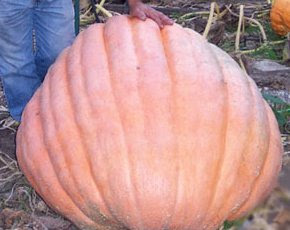 Not the actual pumpkin, but it was about this size.
The house it belonged to had a long flat driveway.  The Great Pumpkin sat on an inverted garbage can up by the house.  We pulled up in John’s Camaro… I think it was the same 4 of us as the last time, but I’m not sure.  But I stayed with the car and watched John and Rik disappear into the darkness, up the driveway.  I was wondering how the hell they were going to get that thing back to the car.
Then, as if summoned, they appeared heading back to the car, rolling the pumpkin in between them.  It took both of them to get it up into the Camaro’s trunk, and it had even been hollowed out!  It didn’t even fit in the trunk opening so we just left it open and hauled back up the road to our house.  As a parting gift, the guys left a little pumpkin, the size of a softball, up on the trashcan.
We came up with another giant pumpkin that night, I don’t remember how or where, so by the end of the night, we were the proud owners of a couple hundred pounds of pumpkin.  That’s where the lack of forethought came in… what the hell did we really want with all those pumpkins?  And more importantly, where were we supposed to put them?
Well, we put them in the workroom in The Barn, for starters.  But beyond that, we had no other plans.
It got worse the next day, when I opened the newspaper and learned that one of our neighbors had claimed the top prize in the county for Largest Pumpkin.  They even had a picture.  Yup… it was the one we took.
Aaaaugh!  Now it’s not just a hot pumpkin we’re storing, it’s a Prize Winning hot pumpkin.  So we did what we do best… nothing.  We just let it sit out there until winter.  Luckily, Dad was not the putter-around-the-workroom kind of dad.  But I knew it was out there, it was rotting, and eventually I’d have to do something about it.
So one winter night, we did the only thing we could… We took the pieces out and threw them in the neighbor’s pond.  I hoped they’d sink, but I didn’t wait around long to see.  I hoped the bluegill liked pumpkin…
Later I heard the neighbors wondering how the hell a pumpkin got in their pond.  I was like, “Wow… that’s weird…” I don’t think they recognized it as the Award-Winning Alpha-Pumpkin of the County though and I never felt any repercussions.
The thing is, I felt really bad about the whole affair… I knew it was a completely stupid thing to do, from the stealing to the dumping.  So I learned my lesson… no more thievery for this boy.
And that worked out, because it left me with so much more time to hang around The Barn and drink beer.  Because beer is so helpful with decision-making… 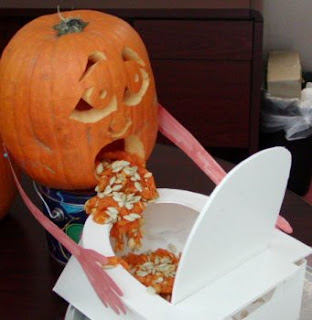