It’s been a rough week and a half at work, not so much for me but for a number of my friends.
Last week, it was learned that my old department’s work was being sold to another company.  The department would transition for the rest of this year and be disbanded in February.  It wasn’t a total surprise… people knew something was going to happen eventually.
I’d seen sufficient writing on the wall 4 years ago and made a move to get into another department and hoo-boy, am I ever glad I did.  Having been through a couple of rounds of layoffs already, it’s kind of a sore spot with me.  Both times, it completely fucked up my life.  And now, it’s harder than ever to find a job.
So yesterday, my friend Jenn appeared in my cube, for a talk.  You remember Jenn… she works in my old department and was one of the featured players in this post about office pranks.  She’s the one whose red binders my buddy replaced with ugly black ones, just to shake up her orderly/OCD tendencies. 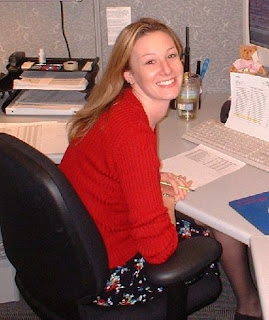 This is Jenn.  Just look at how her supplies are all lined up on her stack tray on the left.
And don’t feel bad about us pranking her.  Before the job fell to Cassie, it was Jenn’s job to always remind me how painfully old I am becoming.  Of course now, I have an angle with which to fight back, because Jenn’s boyfriend (aka the BoyToy) is significantly younger than her.  That’s more than enough for me to work with.
Anyway, given what was going on, we needed more of a talk than would be realistic in a cube, so we decided to go to lunch.  We decided on her favorite downtown eatery, the Hooters at the Inner Harbor.  (Guys, is this a cool chick to hang with or what?)
It turns out that 5 days before the department elimination was announced, her house got broken into, ransacked and robbed.
She was on her way home from work and talking to the BoyToy on the phone as he was getting home himself.  He spotted some closet doors open, clothes and stuff on the floor, and was all, “Geez, were you in some kind of hurry going to work today?”
She didn’t know what he was talking about.  Obviously, given her orderliness obsession, no clothes were ever left out, nor were doors left ajar, nor was anything ever left out of place.  He went on describing the disorder in the house, thinking Jenn had some kind of fit before leaving that morning.
Jenn was becoming more and more agitated, knowing that she’d left everything all buttoned up, as per usual.  Then the BoyToy got to the back door, which was smashed in.
(Note: holy shit, this is weird… the Warren Zevon song “Disorder in the House” just came on my PC music shuffle, right after typing that phrase 2 paragraphs ago.  Whoa…)
Jenn was eventually able to fight through the bumper-to-bumper traffic and screech into the driveway, and survey the damage for herself.
They took so much stuff… Every drawer had been emptied.  They’d even gone through her files.  They took her PC and laptop, (with a life’s worth of pictures on them), their Sony Playstation and games, all her jewelry.  They went through all her clothes!  They took the BoyToy’s authentic Ravens jerseys.  They stole 2 half-full bottles of vodka.  The TVs weren’t taken but they figure it was only because they didn’t fit into the bags they used to carry the shit out.  They also somehow missed a stack of cash that was sitting out on the microwave.
Never one to miss out on making a scene, she told me she ran out of the house to where the BoyToy was talking with the neighbors, collapsed onto her knees and began wailing into her hands.  Gotta give her style points on that.
When the police finally showed up, they were asking her what was done in the house.  She was like, “Look around.  Anything that’s on the floor, they did.  This place was immaculate when I left this morning.”
Sometimes having OCD tendencies pays off.  Jenn was able to provide the police with 8 pages worth of items she knew to be missing.  They were amazed that not only did she provide such a detailed list, but that the list omitted any mention of cash.  They said everyone says they lost cash.
But that’s not Jenn.  She would never do anything like that; her guilt would not allow her to do such a thing.  And she also said that she feared the Karma of lying about something like that.
The Karma here is the rub.  While we ate, she agonized over why such a thing happened to her.  She didn’t live in a crime-riddled area.  The cops said they rarely saw such a thing in her neighborhood.  Was it someone they knew?  An unforeseen guest that had been there for a party?
Why her?  What had she done in the past that she was being punished for?  Was it stealing that roll of nickels from a friend in grade school?  Or walking off with someone else’s clothes at school?
Naturally, I said it was because she was a Ravens fan.
Nah, just kidding… I did say that whatever she’d done as a kid, she’d more than paid for with the 20-odd car accidents she’d had.  For this, I don’t have any answers.  Sometimes shit just happens.  Bad shit happens to good people.  What can you do?  Life isn’t fair sometimes.
It kills me so see such things happen to a dear friend.  I mean, look at her picture above.  Hurting Jenn is like stomping on kittens.  It’s mean, it’s cruel and it’s just not right.
Whoever had robbed the place knew what they were doing.  They wiped down everything they touched and probably wore gloves as well.  There were no fingerprints left anywhere.  There was, however, a ton of synthetic fingerprint dust all over everything, and the problem there is that when you try to get it out of all the clothes you’re washing, it doesn’t come out.  It just stains the washing machine and comes off on everything else you wash.
It’s enough to bring your average OCD chick to her knees all over again.
All I can say now is that whatever Karmic debt she had, it’s paid in full.  Or more likely, it’s a sign that things are going to soon get better, to balance out this obscenity.
No one’s luck can stay that bad, can it?
My advice is to never again wear whatever she wore that morning.  It’s obviously bad mojo.
Instead, I recommend a nice Steelers jersey.  It’s on me!
Posted by bluzdude at 1:59 PM