I love my MP3… I take it with me to work every day.  It’s invaluable to me on the subway, so not only do I get to hear my tunes, I don’t have to listen to people yapping on their goddamned cell phones first thing in the morning.  Then at work, I plug it into a pair of desktop speakers and I have my music for the day.  I always play it in “shuffle” mode, so that all files come up randomly.  I currently have 3312 “files” on my MP3… that’s songs, comedy bits, movie sound bytes and assorted Myron Cope-isms.
So when I saw Uncle Crappy’s post last Sunday, writing about the 1st 25 songs that came up on his I-Pod shuffle, I knew that was a great idea to steal I could pay tribute to him by doing likewise.  So here goes:
(All links go to Amazon.com, where you can click to hear a snippet of the song for free, or download it for a buck.)
“Anytown USA,” George Thorogood, The Hard Stuff.  Whew, right out of the gate, good-rockin’ George.  I always say, if cavemen could rock and roll, they’d play George Thorogood.  This is a cut from one of his more recent (and overlooked) CDs.  No matter.  I buy every disc he puts out, because there’s guaranteed to be at least 1 or 2 killer songs.  Hmm, maybe I should start downloading more.
“Rattlesnake Rock N’ Roller” (live), Blackfoot, King Biscuit Flower Hour.  My beloved southern rockers… Blackfoot is way underrated.  Every album they put out kicked ass, at least until they started fiddling with their lineup.
“Tiny Dancer,” Elton John, Madman Across the Water.  Sigh.  Thus is the problem with the shuffle setting.  If I were making a mix tape, I’d never follow Blackfoot with Elton John, unless it was “Saturday Night’s Alright for Fighting.”  Still, this is a great song.  When I hear it now, I always think of how they sang it on the tour bus in the movie “Almost Famous.”
“High Time We Went,” Lou Ann Barton, Read My Lips.  Lou Ann Barton is a Texas roadhouse singer that had a brief hay-day in the 70s.  She also sang with Stevie Ray and Jimmie Vaughan.  Here, she’s covering the Joe Cocker song.
“Moving,” George Thorogood, The Hard Stuff.  Wow… George again, from the same album.  Way to show off my depth of field, there, MP3 player… 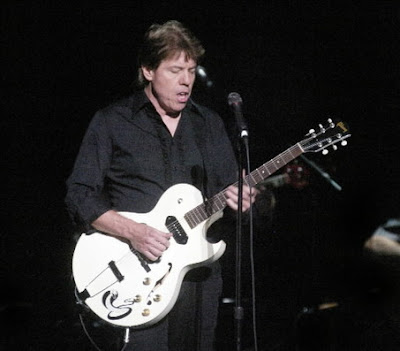 “What?  Me again?
“Dancing in the Dark,” Bruce Springsteen, Born in the USA.  One of Bruce’s catchiest, if not deepest.  I always think of the hot chick he danced with in the MTV video, who grew up to be Courteney Cox.  I saw Bruce play the Pontiac Silverdome on this tour in 1985; one of the best concerts I ever saw.
“Girls Just Wanna Have Fun,” Cyndi Lauper, The Body Acoustic.  This was a disc where she remade all her old songs.  This one sounds like the original, crossed with Buster Poindexter’s “Hot Hot Hot.”
“TNT” (live), AC/DC, Live at Donnington.  Good… I was worried that even though I probably have hundreds of AC/DC tracks on my MP3, one might not show up for this exercise.  TNT would be one of my “coming up to bat” tracks… “Oi…Oi…Oi…”  Although given that I live in such a predominately Jewish neighborhood, maybe that should be “Oy…Oy…Oy…”
“People, News and Views,” Bob & Tom, Back in ’98.  From the syndicated radio show.   Here, they have a Larry King impersonator call in and spout some random crap, like Larry does.  “I could be wrong, but if a baboon’s red ass doesn’t put a smile on your face, check your pulse.”
“Backlash,” Joan Jett, Notorious.  My Queen makes an appearance.  Notorious was a little-known album from 1990 or so that was too good to have sold so little.  “Don’t Surrender” was a killer song that should have been a huge hit.
“I Won’t Back Down,” Tom Petty, Full Moon Fever.  I’m generally kind of “meh” on TP, but I had this promo Greatest Hits CD, so what the heck, I ripped a few songs.  “Breakdown” is still my favorite Petty song.  Plus “Spike,” from his live album.
Sound byte from South Park, with the “handi-capable” "Jimmy" character saying something so incorrect that I don’t dare type it here.  Again, it’s the Forrest Gump effect… you never know what you’re gonna get. 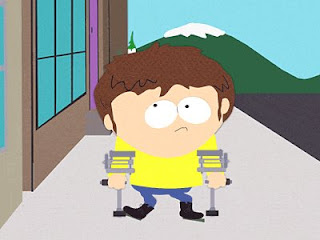 “Haircut,” George Thorogood, Get a Haircut.  Man…  George times 3.  At least it’s a different album this time.
“Hello Again,” The Cars, Complete Greatest Hits.  The Cars were a staple of my college years.  This one wasn’t my favorite, as by this point, I thought they were getting a little too synthetic and drum-machiney.
“Stand On It,” Bruce Springsteen, Tracks.  Oh, I love this song.  It’s an old 50s-style rocker that was a B-side to one of the Born in the USA singles.  Short, fast and bouncy, with Professor Roy rockin a killer piano.
“I Got the Fire,” Henry Lee Summer, Way Past Midnight.  HLS was kind of a one-hit wonder from the 80s.  This was from his album after the one that had the one hit.  We had a promo cassette in the store and I nabbed it because of this song.  And it wasn’t until I bought that LP/Cassette unit that I could plug into my PC that I could get an electronic version for my MP3.
“Ain’t Nobody Home,” BB King, 80.  Recent disc from BB mostly made up of duets.  This one is with Daryl Hall.  I like the one he did with ZZ Top’s Billy Gibbons better.
“Hot Monster,” Young Frankenstein Soundtrack, (movie sound byte)  “You little zipperneck… All right… “7” has always been my lucky number.  Come over here, you hot monster.”  I miss Madeline Kahn. 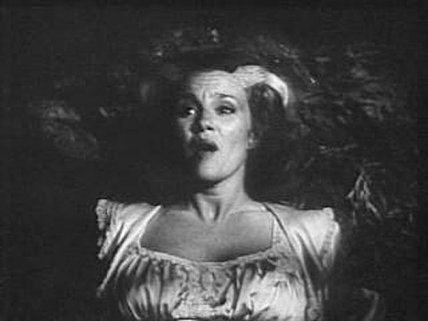 "You better keep your mouth SHUT!  Oh, I think I love him!"
“Something About You,” Boston, Boston.  Solid album track.  In fact, on this album, there are no bad cuts.  Boston’s first album still holds up.  The production sparkles, even by today’s standards, though it was made in the mid-70s.
“You’re Humbuggin’ Me, Johnny Winter, Let Me In.  Typical Johnny Winter… a few unintelligible verses, then 5 bars of guitar solo.
“The Full Bug,” Van Halen, Diver Down.  Deep album cut I only included because the day I ripped the CD, I was too lazy to edit the tracks.  Historical note: Diver Down was my first VH album.  I never particularly cared for them, but then I heard their version of “Pretty Woman” (with the killer intro “Intruder”) and I was hooked.
“You’re All I’ve Got Tonight,” The Cars, The Cars.  Pop perfection, just like most of the songs on The Cars debut album.  No clunkers there either.
“Barbara Ann,” Beach Boys, Summer Beach Party.  The Beach Boys cut this album in a studio with a bunch of friends, like it was a party.  There’s no production value and the singing is raggedy but fun.  We used to sing to this at every Barn Party.  Once we even made a recording of us singing with the record and sent it to a friend like it was all us.  (Long story.)  Anyway, it was fun.
“A Little Meat on the Side,” Katie Webster, No Foolin’.  One from the Swamp Boogie Queen, featuring some rollin’ blues boogie.  “A woman can’t live on bread alone/ she gotta have a little meat on the side.”
OK, one more…
“Sin City” (live), AC/DC, Bonfire.  Great!  A rousing finish… live AC/DC from their box set, performing on Australian TV in the 70s.  RIP, Bon Scott.  You were a beast.
Though not the one that just came up, this is my favorite version of my favorite AC/DC song.

Whew… at least I avoided the Abba mmmmphhh! (hand clamping over mouth…)  All old stuff though… honestly… I DO have at least a couple things from post year-2000.  See?  Look… my new “Best of Gary Hoey” CD just arrived today.  (Thank you Unapologetically Mundane, for the recommendation.)  I should have ripped and loaded before this exercise.  Maybe next time…
Thanks again to Uncle Crappy for the inspiration!
Posted by bluzdude at 8:13 PM