Tomorrow is Election Day.  (Or today, depending on when you’re reading.)  It always reminds me of an old joke I used to tell in high school, before political correctness was invented.
“The Japanese Foreign Minister was visiting the White House and at a cocktail party, the First Lady asked him, “And when did you last have an election?”
The Foreign Minister blushed and stammered, “Before blekfast.”
Election Days aren’t so funny to me any more, especially not this one.
Two years ago, there was a public groundswell for change and a young, articulate Midwesterner rode that wave to the White House and he carried a lot of like-minded people with him.
This year, the ground is swelling again, but now it’s not a wave of hope, but one of fear, hate, and misdirection.  It’s hidden behind a lot of lofty but amorphous ideals like “liberty” and “freedom.”  It has to be hidden because they can’t just come out and say “We need to go back to Republican government now because the businesses need to start paying big bonuses to their executives again.  Those Democrat do-gooders are upsetting the applecart, with their oversight and regulations.  Things go so much better for us when we regulate ourselves.”
What upsets me so much is that it’s working.  We have this childish need for immediate gratification, stoked by talk radio and Fox “News.”  Sarah Palin was quoted in this morning’s paper quoting “the voters” as saying, “You blew it President Obama.  We gave you the two years to fulfill your promise of making sure that our economy starts roaring back to life again.” 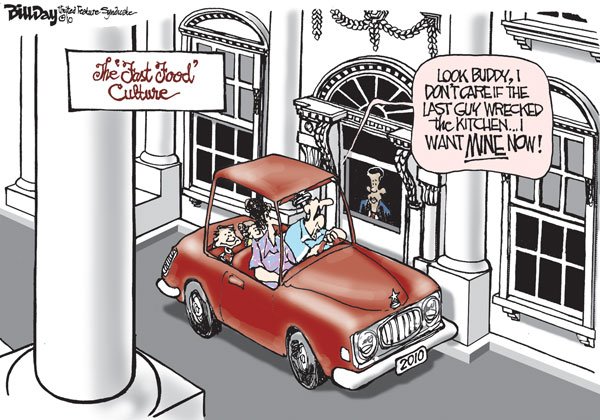 Two whole years.  The Democrats inherited an economy battered by 8 years of neglect and mismanagement and the Dems are at fault because they couldn’t fix it in two years.  I’ve made this point several times before but it’s still no less valid.  There wasn’t a fucking peep out of the Republicans when President Shrub and his business cronies turned a surplus into a huge deficit.  When they cut taxes, you and I got our beaks wet, but Big Business sucked up 98% of the dollars.  There was zero complaining from the right about the deficit.  But as soon as the dollars start going to the middle class, they’re all crying about the deficit, and their “liberty.”  As soon as it’s not their guy doing the spending, it’s socialism. 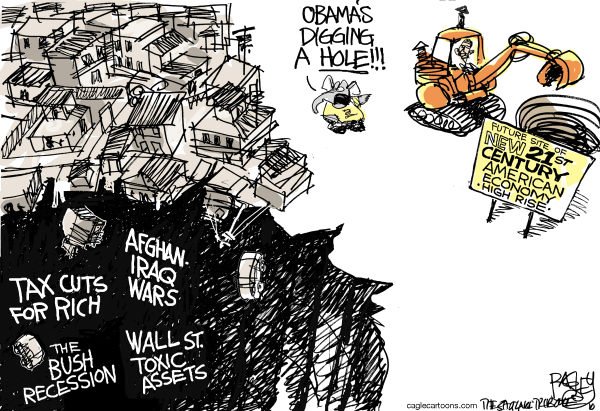 "Liberty" is what you fall back on when you can’t win an argument on merit.  “Patriotism” and “Freedom” work just as well.  It’s a way to move the masses when you don’t dare tell them what you’re really up to.
So every year, the usual boogiemen are trotted out: Gay marriage, abortion, stem cells, and now, illegal aliens. 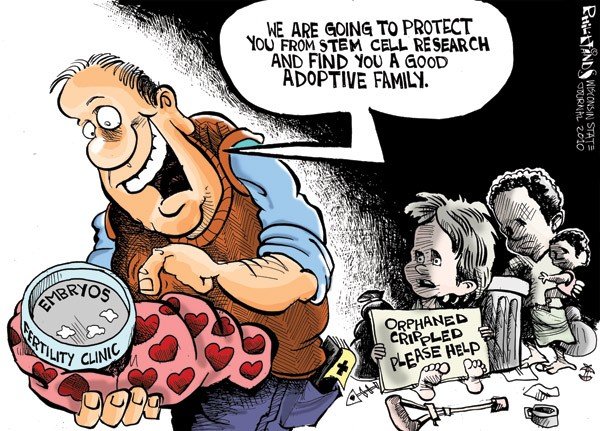 I’ll tell you what; the Republicans could stamp out illegal immigration in a heartbeat if they really wanted to.  All they’d have to do is put their effort to prosecute employers that hire illegal immigrants.  The jobs dry up, so does the flow of immigrants.
But they’ll never do that, because they are beholden to the businesses.  The businesses are financing their campaigns, now more than ever.  (Thank you Justice Roberts.)  Plus, prices would rise because the cheap labor would be gone.  So what do they do?  They rail about building walls and anchor babies and welfare and dozens of imagined rights that they have.  Meanwhile, the porch light is still lit.  Wouldn’t it be easier just to turn out the light, you know, if that’s what you were really after?
But the immigration is more useful as an issue than it is as an actual problem to solve.  Immigration can be used to tell lies about finding heads in the desert and panic people into voting Republican.
I remember seeing an interview with a Republican operative, back during the last Presidential campaign.  This guy was suggesting that it was actually better for Republicans if Obama won.  That way, he’d be saddled with all the problems of their making and when he couldn’t solve them in a reasonable time frame, (ie. right now), the Republicans could ride right back into office. 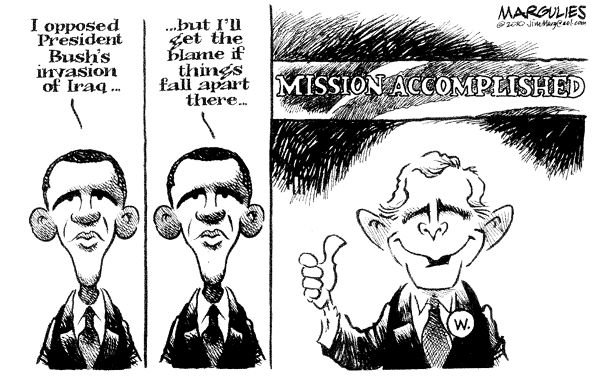 Why do you think they put so much effort into stuffing conservatives into all the lower and mid level government posts and lobbying outfits?  They were laying in reserves for the long run.
It’s disturbing that this is exactly how it’s working out.  They’re running the playbook perfectly.  The only problem is once they get back into control, we instantly revert to the year 2000.  And that would be great news, if, of course, you’re one of those top 2% in the country.
I doubt that the Republicans will regain control of both houses.  Probably the House, and they’ll draw closer in the Senate.  And if you think nothing got done these last two years, just wait for the next two.  The Right doesn’t care what happens to the middle class, and whatever does happen, they will blame on the Democrats.  Hell, they’re doing it right now.  They are actively harping about nothing getting done and the awful state of, well, everything, but they oppose every single piece of legislation put forth, whether they agree with it or not.  I say when you are ridiculing ideas that you, yourself put forth in previous years, you are too goddamned disingenuous to be taken seriously.
You all know my position: you don’t put the car back into the hands of the people that drove it off the fucking cliff, even if you don’t have all the dents banged out of it yet.
Don’t believe the commercials… any of them.  It’s all bullshit designed to strike emotional chords.  Just look at what happened for yourself.  Eight years of George W. Bush and friends brought the economy in this country to the abyss.  Complaining about spending the money necessary to fix it is laughable.
Your taxes went down, not up.  (If you make over $250K, I apologize.  Your taxes went up.  You still make many times what I do.  Cry me a fucking river, pay the bill and go back to the country club.)
More people can get health care now.  Not everyone, yet, but it’s better.  The insurance companies can’t screw you as vigorously as they were before.  (They’ll have to find new ways… they’re working on it right now.  First priority, when the Repubs get back in power they’ll remove the bans on disallowing pre-existing conditions and all the public safeguards that were just passed, BUT… They’ll keep the requirements that everyone has to buy health insurance.  This is a fact.  The Insurance Industry is lobbying on it right now.)
Bans on Morning After contraception have been lifted, as have the gag rules that withheld funding to any international aid group that dared to even talk about abortion.  The “Conscience Rule” has been lifted, which allowed pharmacists to deny dispensing birth control if it was against their personal principles.  That one always struck me as particularly stupid… it’s like allowing a vegan cashier to refuse to ring up your bologna sandwich.
The Justice Dept. is actually pursuing Justice cases and is not being sent on election fraud witch-hunts.  We’re actually somewhat respected in the world again, because we have a leader that considers all angles, weighs information and makes decisions, as opposed to his predecessor that went with his gut and whichever way made the most money for Halliburton.
Things are finally turning around.  It’s not fast and it’s not easy.  There’s still a long way to go.  But if we turn the keys back to this collection of back-slapping, Big Business-dick-sucking frat boys and puckered-bung moralists, then we deserve what’s coming to us.
But at least we’ll have plenty of “freedom” and “liberty.” 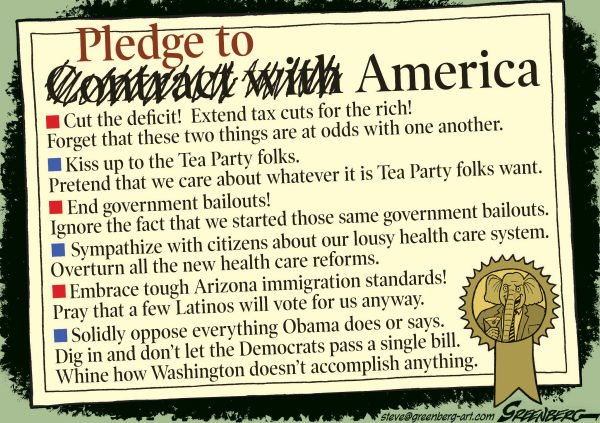 Thank you, as always, to First Door on the Left, for being a fabulous go-to source for political cartoons.
Posted by bluzdude at 5:25 PM