Sorry… still too many tidbits rolling around in my cranium and nothing close to a coherent front to back post.
Office Bluz
I work in a building that has a number of floors that have all been remodeled with the same design, so the layout between floors is very similar.  So it occurred to me today that every time I visit a nearby floor, it’s like going to some parallel universe.  Everything looks alllllmost the same but there are tiny differences… Extra file cabinet here, a cubby hole there, different stuff on the outside of the cube walls.  It’s eerie.
A couple months ago I got off the elevator on the wrong floor by accident and went walking in the direction of “my cube” and was all, “OMG, they put in a new row of cabinets!  Hey, where’s my bulletin board?”
Then, of course, I realized I was on the floor immediately below mine and hurriedly slunk off up the stairs, hoping that no one had spotted the intruder.  I was scared shitless that I’d spy someone that almost looked like me working in my doppelganger cube.
And what if, in the parallel universe, he was a Ratbirds fan?
I’d have no choice but to stalk and kill the Anti-Bluz.  If you kill your Alternate Universe Self, is that suicide or fratricide?  Wait, if it’s a Ravens fan, it’s Ratricide.
Mojo Fallin
It’s 9 games into the season and I just realized I’ve neglected to don one of my customary mojo devices.  I have one of those clip-on badge holders with a retractable string, with a Steelers logo on it.  I totally forgot to swap it out with my off-season badge clip.
Now with our record at 6-3 and coming off a big loss to the Patriots, do I think we’d have done better if I had the badge clip?  Or is it really bad mojo and we’d have been much worse if I had been wearing it?
I guess we’ll find out this Sunday.  I put the badge clip on, on Monday.  If we lose to the Raiders, I may have my answer.
HMO-Phobia
In my post before the election, I mentioned how the insurance companies were bankrolling Republican candidates with the goal of stripping the consumer protections from the Health Care Reform bill, while leaving the mandate that everyone buys health insurance.
This strategy was reiterated in a Newsweek article I read today, written by an insurance company insider named Wendell Potter.  He had worked on Insurance Industry public relations and strategy campaigns throughout this and previous elections.
Congratulations, Teabaggers.  The ass-clowns you just sent to Washington to restore your “Liberty” regarding health care are going to try to do just the opposite of what you want… continue the government mandate while eliminating the ban on the insurance companies raising your rates if you have a pre-existing condition, or dropping you all together.
Fuck-ton of money going in; all new ways to keep from paying any money back out, lots of people up shit creek with staggering medical bills.  Happy now?  Now who do you think is going to go to bat for you?  Fox “News?”  The only thing they’re going to do is invent some other “outrage” to switch your attention elsewhere. 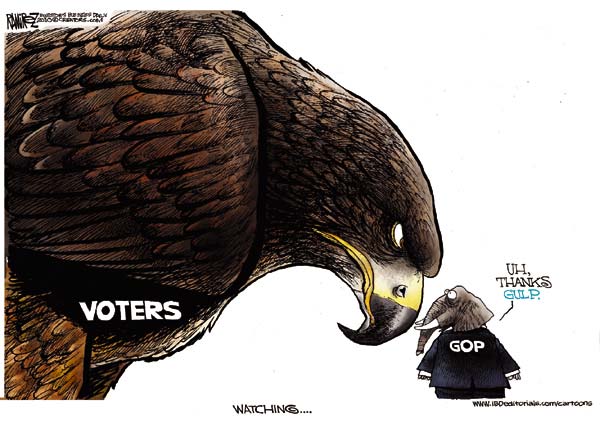 Christmas Crazy
Sometimes I have to wonder just what the hell is wrong with people.
My friend Michelle from Burgh Baby had a post today that was quite upsetting.  This year she is doing her second annual “Christmas Crazy” fund-raiser to provide Christmas presents to kids that would otherwise have none.  These are kids at a Pittsburgh-area domestic violence shelter.  Her post on November 2nd told a personal story about why this is such an important story to her.  I know when I read it, I had to kick in some cash.  If you read it, you will too.
Anyway, in her post today, she wrote about how PayPal is all up in her business making her prove that this is a legitimate charity.  You know, as if last year’s numerous blog posts and pictures of busses stuffed with toys weren’t enough.
Either someone sent in a complaint to PayPal, or they were doing some kind of investigation on their own to root out fraud.  If it’s the former, it makes my head explode that someone would be such a fucktard (the technical term)… probably someone jealous of someone doing something that’s truly selfless.
If it were a routine PayPal investigation, I’d have to think again about using them for anything.  It would take about 45-seconds of research to confirm that this is a legitimate endeavor that will benefit hundreds of kids.  To refuse to do even a token search, and instead force Michelle to provide all kinds of documentation… receipts, bank records, etc… that’s just ridiculous.  The arrogance of the whole thing got me so angry I offered to plaster the PayPal executives with email containing terminology so crass and depraved, Samuel L. Jackson would start hitting me up for tips.  They’d have no choice but to give her a pass.
Because she’s a quality human being, she waved me off.  So instead I’m going to kick in another $20.
You should too.  I’m putting her button up on the side.  Or click here or the button to donate.
Posted by bluzdude at 7:48 PM