I can’t blame the Republicans for what happened yesterday.  They did what they do… win elections by any means necessary.  They are expert at running campaigns based on fear and misdirection.  When they aren’t solid on issues, they create new ones that play much better… the “Boogieman” issues that they can use to make people afraid and play on that fear and insecurity. 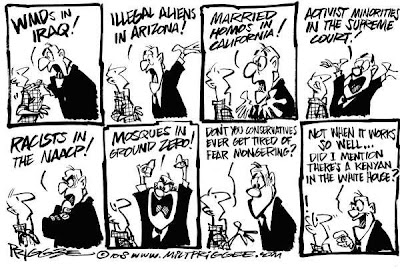 I’ve been saying it for years; the primary Republican concern is the well-being of business.  Everything else is merely the window-dressing used to get elected.  They glommed on to religion and values by demonizing gays and abortion providers and naughty words on TV.  (Sex is out but blood-spattering violence is fine!)  Every so often, they throw a bone to that crowd and appoint some tight-sphinctered moralist to a watchdog position in the FCC or the Justice Dept.  That leaves them free to dismantle the industry regulation that saves lives but costs money.
So I don’t blame a snake for being a snake.  I blame the Democrats and Independents that sat on their button-pushing thumbs and stayed home.  I blame the people that only came out in 2008 to support their brother Barack and be a part of history, but didn’t bother to come back again to ensure he could have people around to work with him.
I blame the gullible who believe the onslaught of negative, misleading ads, bought and paid for by big-moneyed interests from inside this country and out.
I blame the Roberts court that thought it would be a good idea for billionaires to pay for a flood of advertisement designed specifically to sway people.
I blame the Democrats that didn’t have enough balls among them to get shit done when they had the chance.  One thing I’ll give The Shrub credit for is ramming his issues through Congress.
He basically said, “Don’t like this bill?  Tough shit.  We won.”
We should have done the same thing.  Now we have two years of gridlock and watered down bills to look forward to.  Meanwhile, the country spirals down the drain.
Random thought:  John Boehner is so orange, when I carved his face in a pumpkin last weekend, three Insurance Industry lobbyists showed up to give him checks to distribute on the House floor.
I saw an article already this morning about how Boehner wants to “Shelve the health care monstrosity.”  Which part?  The part where your 20-something kids can be carried on your insurance?  The part where you can’t be denied coverage for a pre-existing condition?  The part where your kids are covered?  Please remember that they are NOT going to end the requirement to buy insurance… at least not without a great deal of attention and pressure brought to bear.  The insurance industry loves that part of health care reform.  They just don’t want to have to do anything that might require them to pay for anyone’s health care.
He’s also promising limited government.  I wonder if that means they’re going to stop the government from limiting the right of its citizens to marry or adopt.  Or limit the government’s push into the decisions regarding a person’s reproductive choices.  Or limit the broadcast of research done on the government’s dime, when it contrasts with certain government official’s desired results.  Will Boehner’s government limit the medical choices of those that suffer from debilitating diseases, from cancer to Parkinson’s?
I’m not holding my breath.  I believe they’ll mostly concentrate on limiting big business’s exposure to anything that may decrease profits.  That, my friends, is the Republican Prime Directive.  Everything else is just window dressing. 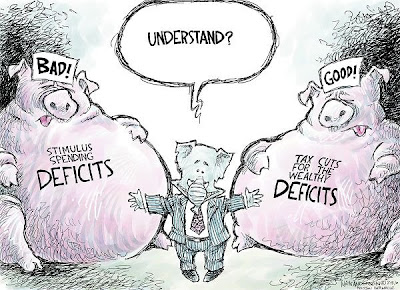