My Steelers are playing one of their archenemies today, the New England Patriots. 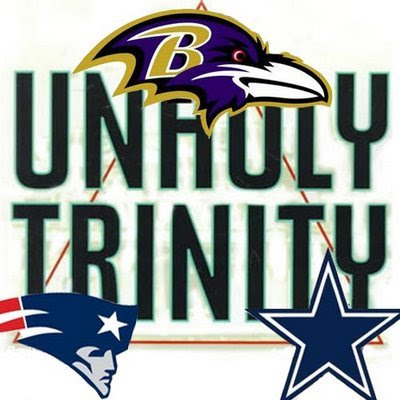 Both teams are 6-2 and are fighting for domination in the AFC this year.  The Patriots come in having won the last 5 of 6 against the Steelers in Pittsburgh.  I was at a two of them, although one was before that run started.
In January of 1998, I had just moved to Baltimore and was living with my brother Ed and his wife.  Ed and his friend Walt had a pair of tickets for the Steelers and Patriots in the first round of the playoffs.  I’d never been to a playoff game before, so they weren’t going to leave me behind.  We figured we’d pick one up for me “on the street”.  Obviously this was before StubHub, E-Bay and the rest of the “secondary market” for tickets came to be.
The game was Saturday so we drove out to Pittsburgh on Friday night.  Once we checked into our hotel in Greentree, we set out for a hotel bar downtown.  Walt found a guy selling tickets almost immediately for $140.  That was a lot for me at the time, (what with being unemployed and all), but I was just happy not to have to worry about getting shut out.
One the way home from the bar, we decided to buzz by Three Rivers Stadium and have a look.  Honest to God, it was 12:30 am and there was already a line of cars about half way around the stadium, waiting to be admitted to the parking lots.
Ed and Walt decided we should come back to the stadium about 5:30 the next morning.  Naturally, I questioned their sanity, parentage and legitimacy.
Ed said “Trust me, when the time comes and you’re there, there will be no place else in the world you’d rather be.”
So there we were; up by 4:45, in transit by 5:30 and in line by 5:45.  The line started moving almost immediately and by 6:00 we were parked under one of the overpasses over the parking lot and firing up the grill.  I think we waited until at least 6:30 before cracking open the beer, as Walt grilled the sausage and peppers. 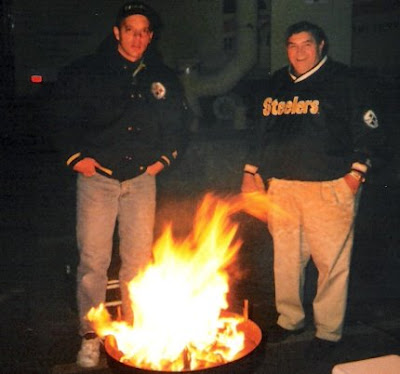 Ed, Walt and the grill.
With beer in hand, watching the sun come up over the city, surrounded a sea of Black and Gold, I realized my brother was exactly right.  At that moment, there was no place in the world I’d rather be.  I actually felt sorry for the poor slobs that were still in bed.  We were the privileged few and that sunrise was our prize. 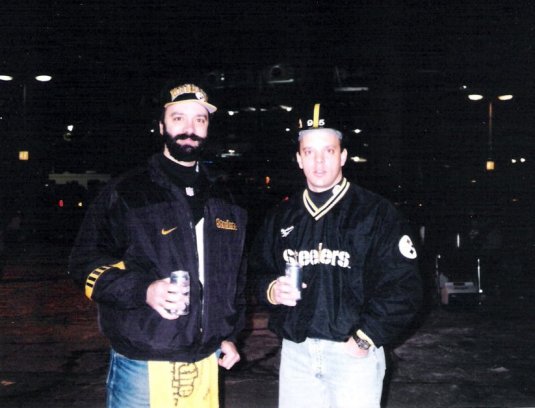 Ed and I hitting our first beers, in front of Three Rivers Stadium, which you can’t see there.
Now mind you, we still had another 6 hour of tailgate yet to go.  It was crazy-town out there.  I saw shit that still boggles my mind. 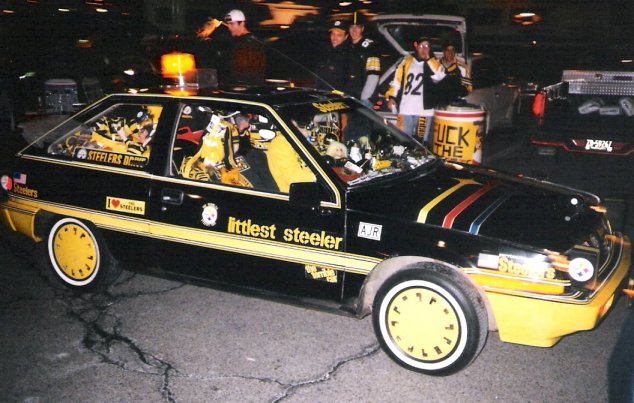 This guy drove around the parking lot, with his cat in the back seat on his special Steelers cat-bed. 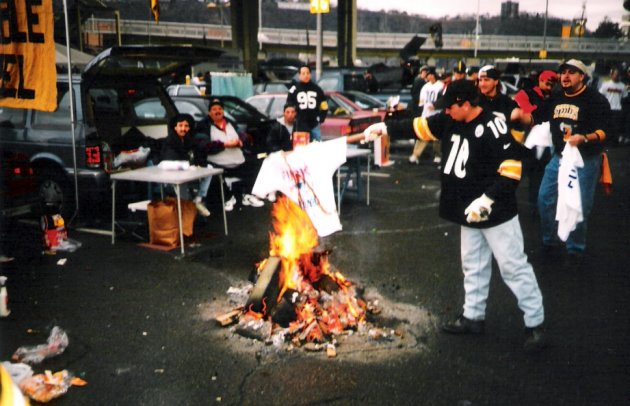 These guys were burning a shirt that said “Fuck the Patriots.”  Other people had that slogan carved into a burning barrel.  Somehow, I don’t think they let you build fires right there on the parking lot surface any more. 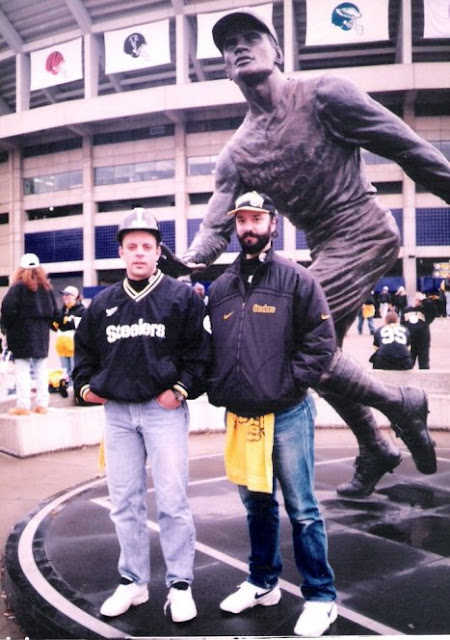 We also took time to honor our boyhood hero, the great Roberto Clemente.  Arriba Roberto!
What I didn’t see were Patriots fans… no more than 12 throughout the entire day.  There was nothing there but a black and gold frenzy.  The Steelers won the game 7-6, on a 40-yard TD run by Kordell Stewart.  It was a euphoric experience for my first playoff game.  From the parking lot, I borrowed my brother’s new-fangled cell phone and called all my friends from Albany, going “Guess where I am right now?”
In 1998, we lucked out with the weather.  That afternoon it was a balmy 50 degrees most of the time.  In 2005 at the AFC Championship game, we had no such luck.  This was a late game and the temperature at kickoff was a most UN-balmy 13 degrees.  (And falling.)
We totally lucked into these tickets.  Ed was on the Steelers season ticket waiting list and his name came up in a drawing for playoff tickets.  He got 4 tickets to each of the first 2 playoff games.  He couldn’t make it to the first one, against the Jets, so my mom and dad flew in from Green Bay and met me there.  It was cold that time too… my poor mom was woefully underdressed and froze her tiny butt off… even to the point where she was rooting for the Jets kicker to make a game-winning kick, just so we could get the hell out of there.  Remember, this was the game where the Jets kicker hit the post on a field goal with under 2 minutes left, and missed wide in overtime.  The Steelers eventually pulled it out.
Mom wanted no part of this game so she sat it out.  Unfortunately her sons had no such good sense.
But this was the magic season.  We had a rookie QB that hadn’t lost a game yet.  The Steelers went 15-1 that year; Big Ben was 13-0.  This was also the year we saw the “Hurricane game” in Miami, in which our plans were scrambled by Hurricane Jeanne.  There was no way we were going to miss seeing the Steelers get into their first Super Bowl since 1995.
We made a token attempt at tailgating, but it was just raw outside.  We hung out at our friend Bob’s tailgate for a while but headed into the stadium pretty quickly.  The cool thing about Heinz Field is that they have band playing before the game and all kinds of exhibits in the Great Hall, so there’s always shit to do before the game.
We do know how to dress for the misery though.  I was totally layered up for maximum warmth AND mojo effect. 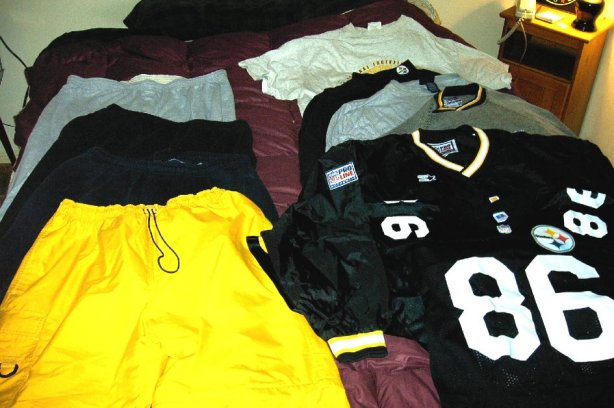 That’s 4 layers of pants/sweat pants and 6 layers up top: T-shirt, Turtleneck, long-sleeve tee, sweatshirt, insulated windbreaker and game jersey.  This was all under my winter coat.  Everything I wore had Steelers on it.
I also had my Steelers gloves and socks; both stuffed with those gel-pack warmers.  Worked pretty well too!  I had my big waterproof boots, and cardboard to sit on and put under my feet.  Add a Steeler ski cap, and skiing face-wrap thing and my bling and I’m good to go. 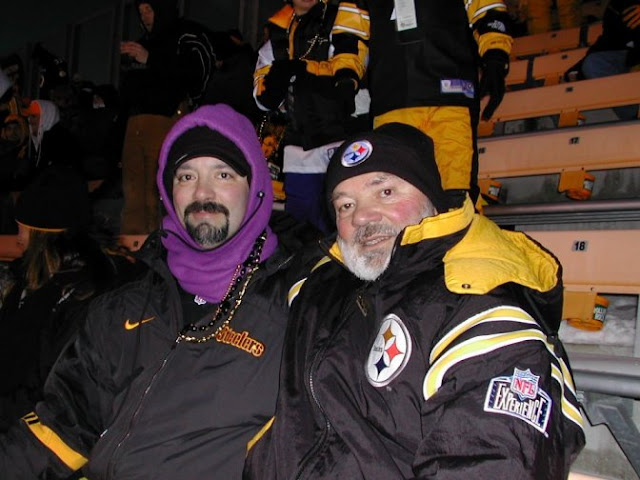 My dad and I, up high in the upper deck of the closed end zone.  Yes, that’s snow packed under the aluminum seats. 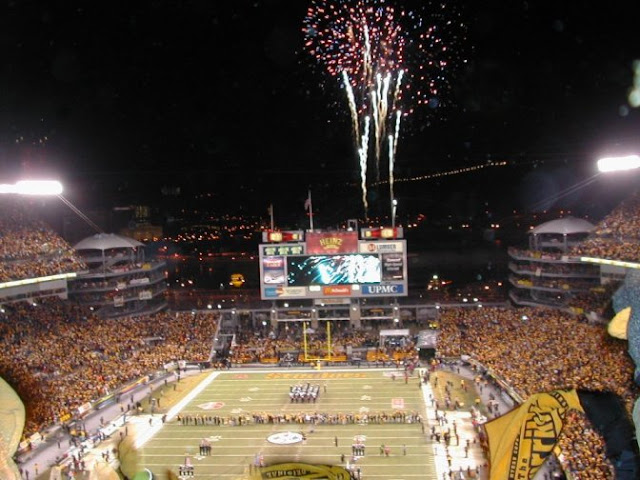 Our vantage point at the beginning of the game, while we were too optimistic to be cold.
Still, despite my best efforts, the Steelers lost… badly.  They were down 23-3 after the first half.  Ben looked terrible and of course, this was before the Pats were busted for illegally filming their opponents.  So they had our intel too.
I felt bad for poor Lee Greenwood who came out at halftime to try to engage a cold and severely pissed off crowd.  He was aggressively ignored.
We started making some progress at making a big comeback, but for every gain, the Pats would make a big play of their own to maintain their big lead.
With all my stuff on, I really was never that cold, until the reality of the 4th quarter set in and I realized that there would be no more miracles this season.  Stupid Pats…
Still, I mostly blame myself for the loss and the evidence is right in the last picture.  See the 3 strings of black and gold beads?  There were supposed to be 4.  I left the room without them at all… D’oh!  Then when Dad had to go back for something else, I asked him to grab my bling from my bag.  He didn’t know how many there were and just brought down as many has he grabbed, which was 3.  It could have been that one missing strand that changed everything.
Realistically, I don’t really think so though.  I’m sure they lost because I was wearing a PURPLE ski-thing.  Purple is the Ravens’ color; therefore I never wear it.  I wouldn’t even let Pinky get purple towels for the powder room here.  But Ed had 2 ski-things… his was a black one, and his wife had a purple one.  That’s the one I had to wear.  So I blame myself.  If I’d manned up sufficiently and just faced having a cold face, the Steelers could have went to the Super Bowl that year.  Such is the responsibility that I bear.
So with that in mind, we come to the game gear mojo for today’s game.
The Steelers are wearing their throwback jerseys and so will I.  Last year we were 2-0 when I wore my Harrison throwback when the Steelers wore theirs.  Once I wore my white Steelers sweat pants and the other, my plaid Steelers sweats.  I wore the white when they beat the Ratbirds, another member of the Unholy Trinity, so I’m going with the white again today.
I am ready for some football. 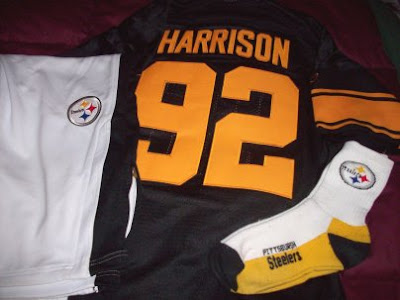