Why I Vote Democratic - Pt 3

At the beginning of the year, I did a guest post at the now-defunct AskCherlock, in which I explained the reasons why I vote Democratic.  It was kind of a long piece, consisting of a list of chasm-sized differences between the two parties.  But even though the post was over four pages long (in Word), I felt like I wasn’t getting into the issues deeply enough.

I also wanted to run the material here too, so I figured I would take each item on the list and flesh it out into its own post.  I posted Part 1 on May 15th and Part 2 on July 26th.  With the presidential campaign in full swing, and full tickets on each side now, I continue…

Disclaimer:  When I refer to “Republicans” here, I’m referring only to the national party leaders and political apparatus.  The same goes for my use of “Democrats.”  Local jurisdictions may vary and I have no knowledge or comment about them.  Also, my “Reasons” appear in no particular order.

Social issues have dominated this year’s campaigns and the difference between the parties cannot be wider.  One party aims to dictate what women can do with her body and the other considers women capable of deciding for themselves.

You would think the Republicans’ “keeping government out of our business” mentality, would apply to our own personal business as well, but it doesn’t.  The Republicans have spent years doing everything they can to prevent abortions, like requiring waiting periods, inserting bureaucratic hoops for clinics to jump through into state laws with the goal of making it too expensive and inconvenient to continue doing business, forcing doctors to read misleading and dogma-driven messages to patients and preventing insurance coverage (even among paying subscribers).

What they won’t do is promote the single most effective abortion preventative, birth control.  It’s hard to believe that in this day and age, the Plan B pill (and even the traditional birth control pill) is still controversial.  Republicans provide a great hue and cry about Planned Parenthood providing abortions, either omitting or outright lying about the fact that abortions only make up 3% of Planned Parenthood business.  Pap smears and birth control are the primary services provided by an overwhelming margin.

Further, the new whine-du-jour is about having to provide “free” birth control, because, you know, how much can it really cost?  And why should the taxpayers pay for people to screw?

The answer is that the cost is a drop in the bucket compared to NOT providing free birth control.  How much do you think it costs for pre-natal care, ER or hospital delivery, food stamps, ADC, welfare and in thousands of cases, incarceration?  It’s a big-time money saver, it helps people maintain a handle on their lives, it gives poor teens a chance to stay in school, and reduces the number of unplanned, unwanted and often abused children.

If you ask me, the problem is with the clientele.  The well-to-do (meaning Republicans) are not likely to go to Planned Parenthood.  The poor and working class (meaning Democrats) are.  Heck, you’d think that they would be eager for Democrats to keep from having more babies.  Maybe they ought to reconsider and then everyone will be happy.

Of course, their solution is to fund abstinence programs instead.  Unfortunately, every study done on them (not underwritten by the religious right) says they don’t work.  Those subjected to abstinence programs don’t delay having sex by any significant margin, but they are far more likely to get pregnant when they do.

So, their solution is no abortion and no birth control, so don’t have sex.  And obviously, that’s meant for us here among the unwashed masses, not our Congressmen.

On a similar topic, one party is working to allow people that love each other to get married.  The other is determined to prevent that.

“The Gays are Coming!  The Gays are Coming!  Hide your children, lock up your pets!”  This is one of those wedge issues that through fear mongering, unsubstantiated claims and gross exaggeration, gets people good and scared enough to vote against their financial self-interest.  Again, you’d think that the aversion of government intruding into lives would include the right to live and love those who you were genetically programmed to love, but you’d be wrong.

The Republicans might not want to work to see that you have clean air and drinking water, a viable Social Security program, or bank services that aren’t rife with hidden fees and charges, but they can prevent those two guys down the street from getting married!  Boo-ya!

This one always ends up coming down to the Bible.  This is wrong on at least two levels, the first being that we do not live in a theocracy.  The Bible may form a loose basis for our primary laws forbidding stealing and killing and such, but it is also chock full of weird-ass sidebars and tidbits so antiquated and bizarre, that they are impossible to reasonably apply to 21st century life.

You know all the examples… the prohibitions against eating shrimp and shellfish, wearing clothes of multiple fabrics, touching a pig’s skin on Sunday, sowing different crops next to each other, permitting slavery and polygamy… We all ignore all that stuff.  But a line or two about gays from the same general section, and everyone is all, “But the Bible says so…”

Republicans now stand in front of us and claim that the government needs to keep their noses out of American business, while under-regulated banks and other industries can continue stacking the deck against us, even though bank deregulation contributed greatly to the economic collapse of 2007.  They call anyone who disagrees un-American and a Socialist.

But then they turn around and claim that the government has the power and obligation to dictate what women can do with their own bodies.  They take the most personal and private of issues and substitute their sense of morality, for yours.  They actively work to keep two consenting adults from marrying or adopting children.  When challenged, they site cherry-picked Bible references, nonsensical assertions and haughty judgments, none of which can pass a smell test.  While demanding “personal freedom and liberty” for themselves, they are quite happy to apply their own rigid dogma to YOU, and expect you to obey.

This insulting and raging contradiction and assault on common sense is why I vote Democratic.  You should too. 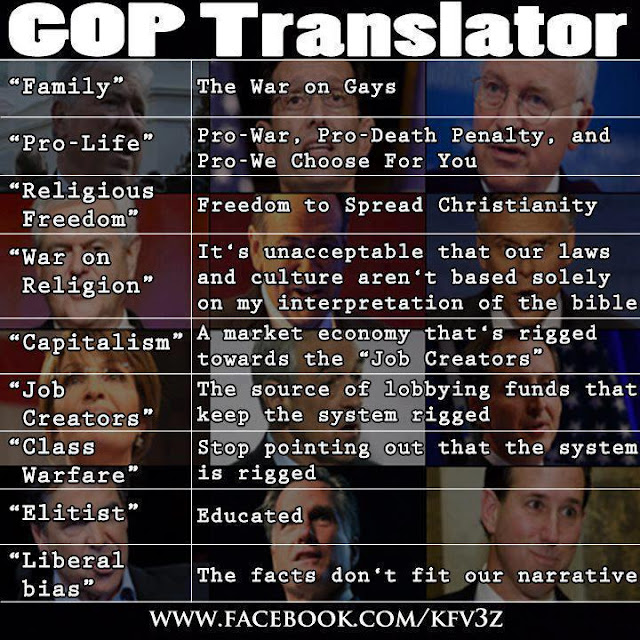 I love the translator - I don't know how I haven't seen that on facebook yet. I just discovered that google reader somehow dropped your blog. Google reader is a dick.

Read all three posts: two thumbs up! (I still have problems with your commenting system -- I've noticed it on all Blogger blogs.) Anyhoo, it's pretty dumbfounding to people don't educate themselves on the real issues that affect their lives.

*that people, not to people. I haz education, I swear.

Either we have an informed, thoughtful, fair minded electorate or the studidest bunch of goobers on the planet who, through ignorance, avarice and prjudice, vote against their own best interests. November 6 will tell.
Meanwhile, keep the faithful blog rolling however mucky the field becomes.

Thank you! Now tell your friends…

Yeah, I’ve been picking stuff like that up from Facebook, for later use here. Best thing about that “translator”… it’s not wrong.

Freakin’ Google… C’mon, guys, I thought you loved me! You keep sending me all these weird searches… Why are you trying to keep Gina from me?

Glad you agree. Through this series of posts, I’m trying to demonstrate tangible differences that directly affect people’s lives. Our country can go one way or the other after this election, and I shudder to thing of what will happen to us should this election mirror the one in 2010. I at least want to know that I did my best to prevent that from happening.

I’m also putting my money where my mouth is. Last weekend, I sent donations to: Obama, Planned Parenthood, NARAL, the Democratic Senate Congressional Committee (DSCC) and MoveOn.org. It’s not Koch Brothers money, but it’s the best I can do.

Pt 2… Funny… the sentence works either way you write it.

I think we’ll have to make the best out of the latter, if past history is any guide. Fear and stupidity and bumper sticker axioms trump education and nuance every time.

Spot on once again. "Education and nuance" belong to those elitist, commie, pinko socialist enemies of Charles and David Koch plus all their.unnamed and unnameable cohorts.
In my wildest dreams, I image a campaign that actually addresses vital issues like survival of our planet and its people.

Especially if the TX Republican party gets their way and bans the teaching of critical thinking skills.

Let's encourage a campaign to persuade them to secede and become the republic they wanted in the 19th century. With their thinking stuck well before then they may be harmless, except to their own citizens.

Love that translator. The most maddening thing to me is that both sides claim to want the same things, but only one side is thinking beyond their wallets. If I have to hear one more politician call some fat cat a "job creator" . . .

OMG, “Job Creator” is one of those buzzwords that drives me nuts. Obviously, the Republicans need some other phrase to describe their primary clientele besides, Rich Guy.

Taxes are at an all time low for our country and have been for over 10 years and corporate profits have rebounded from the 2007 crash.. How much more do these “Job Creators” need before they’ll decide to create some jobs? It’s all horseshit… a verbal misdirection to keep us from realizing that the Top 1% wants to pad their wallets at our expense, to an even more obscene degree.

I'm waiting for the women to rise up and revolt and take over everything. Really, it would all be so much better. And I'd be fine with that. I'd make a wonderful househusband.

I agree with RPM on the whole, people don't educate themselves on the issues and the ones that actually happen to affect their lives. I mean, does gay marriage REALLY hurt them personally? Do gays show up at their front door and make out and say "I'M MARRIED!!!" No. So get over yourself already.

Bagger,
Yes! We could be kept men. I’ve actually been a househusband before. It had its ups and downs. But once my assigned chores were done, I had a lot of free time.


Cassie,
If you think about it, women could end this attack on their rights right now, if they wanted to, by getting serious about it with the men in their life, especially politician’s wives.

The HBO show “Newsroom” had a good exchange on that a few weeks back, where the news anchor was pressing a Senator’s flack about how exactly one’s marriage could be negatively affected by someone else’s marriage. Obviously, he could produce no such example. Sure it was fiction, but it’s not wrong. The “attack” on marriage is an illusion, meant to scare uneducated and willfully ignorant people.