Got a number of things circling the drain floating around today…
Super-Duper 8
I saw the movie Super-8 last weekend.  Loved. It.  It was like a cross between ET and Cloverfield.  The ET part was the relationship between all the little kids that are trying to make this short Super-8 Zombie film in 1979.  The Cloverfield part refers to the big ugly scary monster.  Unfortunately you don’t really get a great look at the monster.  Even the most complete monster-shots are very dark.  I suppose it will help to be able to freeze-frame it on DVD, once it’s released.
Anyway, I love monster movies and I loved Super-8.
Brokenfish2
After the movies, I had to stop at WalMart to pick up a new mini-blind.  I had went the weekend before but they didn’t have the exact size I wanted.  But Wally’s gets me every time.  I went in with a shopping list of 1 item.  I left after spending over $30.00, without buying that item.  So I had to go back again last weekend with adjusted measurements.  But that wasn’t the problem.  The problem was that while I was in there, someone tried to pry the Darwinfish off the back of my car.  They only got half of it, so now it looks like it used to say “Irwin.” 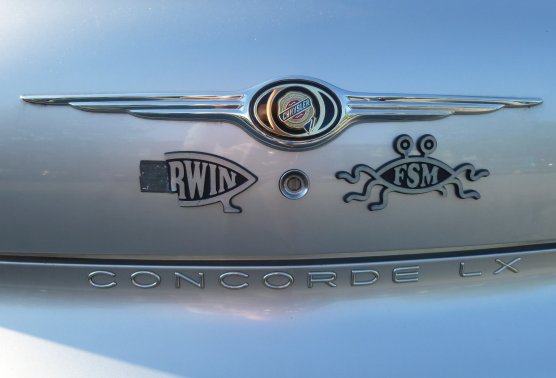 I don't think they knew what the other one was.  I’m pretty sure the fine upstanding clientele of WalMart’s would have no idea about the Flying Spaghetti Monster.  Or wait, maybe they did… I just noticed a leg missing….
You know, all this time I thought it would be some Pittsburgh artifact in my car that would get me in trouble with the locals.  I never thought it would be proven scientific theory as seen in public museums around the world.
Oh well… the plaques are cheap.  I already have a new one on the way.  This one has been on the backs of my cars for over 5 years.  I believe I got my seven dollars worth.
Urinal’otta Trouble
Back in April, I got into email trouble trying to send Blog Sister Cassie a joke picture relating to our running joke about bathrooms that have side-by-side toilets.  Blog Brother Carpetbagger even joined in on the fun.  So it is with great pride and an inability to let a joke die, that I present another chapter in this quickly-dying storyline: 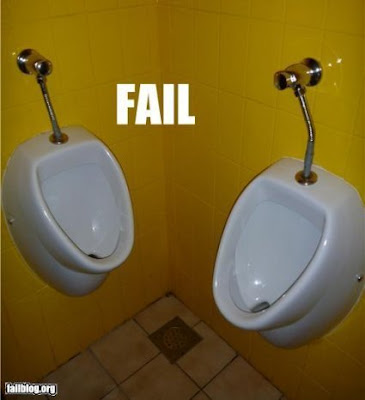 I don’t even have to caption this, because only one thing can possibly come to mind: 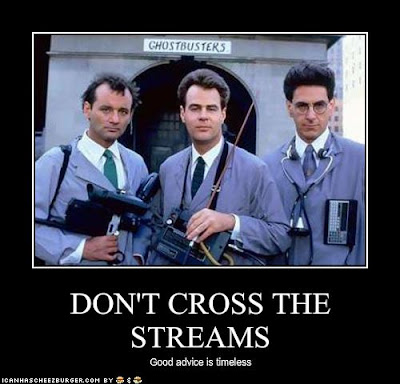 Award Dance
Two weekends ago, I received a spiffy little award from my new friends at Red Town Blues: 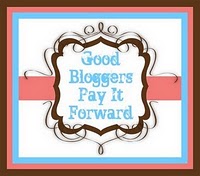 First, let me say that you have to check these guys out.  Their deal is that Virgil and The Reverend are two liberal 20-something guys living in Utah, one of the reddest of red states.  The Mormon Empire surrounds them, so their blog deals with the trials and tribulations of not fitting in with the locals, and dropping some serious progressive rage.  (Y’know, like yours truly likes to do on occasion.)
So, the Award says “Good Bloggers Pay it Forward,” and asks that I re-award it to 5 other bloggers.  Since I’m only a “pretty good” blogger, I’m going to give it to three:
Red Pen Mama: I finally got to meet the Red Pen Mama a couple weekends ago, but I’ve been reading her blog for ages.  She writes a thoughtful family blog and also deals with other national issues from time to time.  And it is always immaculately written, as her name would indicate.
Stuff from Sherry Stanfa-Stanley: Sherry is a recent empty-nester and writes terrific family stories from her past and present.  She is also from the town where I grew up and where I’m about to go at the end of next month, so I’m hoping this keep me on her good side.
A Beer for the Shower: I’m new to this one, but it just stone-cold makes me laugh.  It’s written by 2 brothers living in different cities, Brandon (Chicago) and Bryan (Denver).  (Bryan does the drawings and the both write.)  Check it out… you’ll laugh too.
So, once again, I thank the guys at Red State Blues.  If you like these ending cartoons, you will surely get a charge out of these guys… 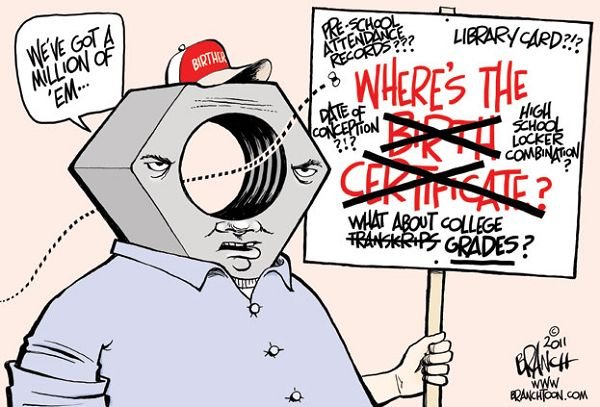 Yeah, I know it’s a couple months old, but it wasn’t getting any fresher… 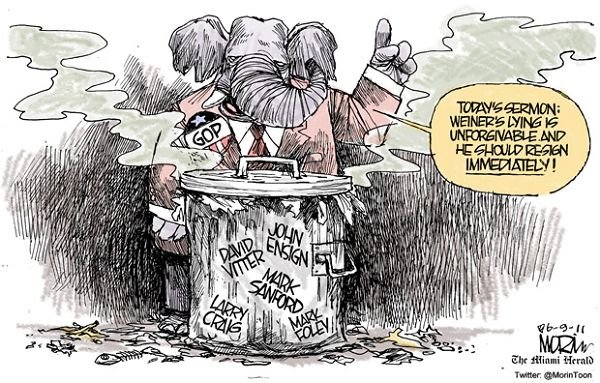 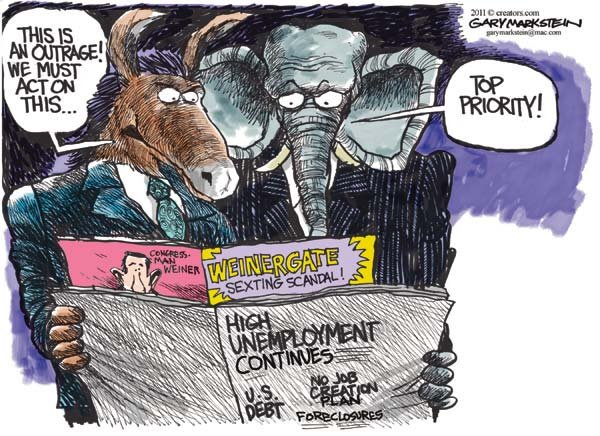 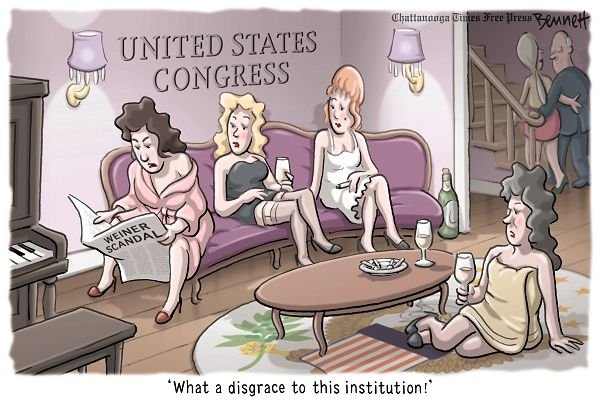 Actually, think more of the other cartoons I usually post… these last two are raking both sides…
Posted by bluzdude at 7:57 PM

Director’s DVD Commentary:
I always hate trying to decide how to pass on blog awards. I usually don’t, but with this one, passing it on was kind of the point. So I tried to find people that A) I thought might like it, B) I haven’t already given them something, and C) Knows who I am.

Editorial cartoons were found, as usual, on First Door on the Left.

May you be touched by His Noodley Appendage! I also enjoyed Super 8. I loved how they rolled the movie the kids made during the credits.

I am not sold on Super 8 just yet.

Rev,
Yes, this site supports the Flying Spaghetti Monster and has been touched by his noodley Appendage. The FSM was a great strike against those that confuse religion with science.

Yeah, I was so happy we got to see the kids' finished product. Great follow-through...

Trash,
[Channeling my inner Used Car Salesman] So what's it going to take to put you in some stadium seating with the smell of popcorn rushing through your hair?

The Guy and I LOVED Super 8 too! Best movie I've seen in a while. We actually said Goonies + ET + Cloverfield = Super 8.

Really, it had everything I want in a movie: interesting plot, good acting, comedy, drama, a bit of a love story, some sci fi and a whole lotta horror.

The only thing is, Baby Powell can hear now, and I hope he doesn't think the whole world is filled with crashing trains and monsters from outer space.

Aw, thanks, bluz. *blushing* I like the fact you called it a FAMILY blog. Thanks for that. :)

I want to see Super 8. I wonder if Dan will go see it with me. is it gory? or just suspenseful? we both are JJ Abrams fans, so that's how I would sell it.

Sorry your darwin fish got poached! How not cool.

And there are no words for that urinal shot. None. Nada. Zilch.

Although now I'm thinking maybe former senator Larry Craig had something to do with them...

As soon as I saw that Super 8 was Spielberg and JJ Abrams I put it on my "to see" list. Glad to hear it's worth it!

And somehow I don't think Jesus would have destroyed other people's property. Shame on them. Glad FSM only gave them the finger!

Mrs. Bachelor Girl,
And it even had an ending that kind of “undid” the earlier bad things, so there could be a happy ending. The “kid camaraderie” was the best part… you call it Goonies, I thought it was like the kids in “It.”

Yes, Baby Powell is gestating to the tune of train crashes, monsters and incessant click-clacking of keyboard keys. Maybe in the future, you can type him to sleep.

Red Pen Mama,
Oh, you don’t like the “M---y” Blog term? Good, because that’s not what you write… you mostly tell stories about your family and how you deal with them.

Super-8 is bloodless, not gory at all… it’s all suspense and hide-n-seek, with occasional “jump-outs.” It’s very tense, commensurate with a PG-13 rating, but not bloody like Cloverfield.

Lastly, you’re welcome. Hope this cheered you up a bit.

Jessica,
The commercials they’d been running all spring were like catnip to me. No way I wasn’t going to see that movie, especially once I heard it was a Spielberg movie.

Just wish I would have noticed that the FSM was missing a noodly appendage. I’d have ordered a backup when I ordered the replacement D-fish. One thing I learned on the site… you can order replacement feet for the D-fish. I guess that’s what gets broken off most. For instance, I’d personally like to break off a foot… in the butt of the jackass that broke my emblem!

Those toilets are HOT. You'd be so proud, today at Matt's softball game, Luca had to pee, so being as he didn't understand the porta-potty, Matt had a 'man moment' and educated him on the finer points of peeing in the woods.

Reminds me of this one time my brother's family was at the beach. Daniel was 2 or 3 at the time. They had to cross about a hundred yards of burning sand to get down to the surf. Then when Daniel had to pee, Ed, not wanting to carry him all the way back to the hotel, told him to just pee in the ocean.

Daniel promptly ran down to the surf, pulled his trunks down at the edge of the water, arched his back and let it fly.

Thanks for the kind words Bluz! Yes we are surrounded by insanity! Sometimes it amazes me that me and Rev actually met given the small chances we had.

Virgil,
Don't mention it... you guys rock. And it's no wonder you two found each other... two guys wearing paisley in a sea of white shirts with black ties.