Major League Baseball’s inter-league play matched up some rivals from the 70s this week.  Baltimore is playing 3 games in Pittsburgh against the Pirates.  If it had been a weekend series, I’d have thought about going out for a couple.  Two years ago when the Pirates came here, I went to 2 out of the 3 games.

But they will be missing one very important participant.  I wrote a guest-post about him in January over at AskCherlock.  I’ve been meaning to repost it over here ever since; I’ve just been waiting for the appropriate opportunity.  And here it is, knocking.  If you read the guest post then, well there’s nothing new to see here.  Otherwise, let me tell you about my boyhood idol…

Roberto Clemente played right field for the Pittsburgh Pirates from the mid-fifties through 1972.  He was my favorite player; my brother’s too.  We both got that from our dad, who spent his younger years frequenting Forbes Field, watching the Pirates.

We must have looked ridiculous as kids, arguing over who got to be Roberto, when we were playing wiffleball in the backyard.  I claimed it because I was the older brother.  My brother claimed it because his birthday was the 21st, the same as Clemente’s number.  Is it odd that we two little suburban white boys grew up idolizing this black Puerto Rican player that spoke mostly Spanish?

It made sense to us… all we saw was a ball player.

We grew up with Dad telling us the stories of Roberto’s unbelievable right arm; how he’d warm up before every game by making a series of throws to each base, from deep in the right field corner.  The velocity was off the charts and his accuracy was peerless.  They didn’t even need fielders at the bases; they just set up baskets for him to drill the throws into.

It’s funny how you never see that any more.  I’ve been to over 70 baseball games since the late 90s, mostly at Camden Yards, and not once have I ever seen an outfielder practicing his throws to the bases.  Never.

For as good of a hitter as Clemente was, it was always the throws that captivated us.  Dad used to tell us of his duels with Dodgers’ speedster Maury Wills, and about how Roberto would throw behind anyone that took too wide a turn at first and throw them out there.  Clemente lead the league in outfield assists 5 times, and it would have been more if people hadn’t stopped running on him. 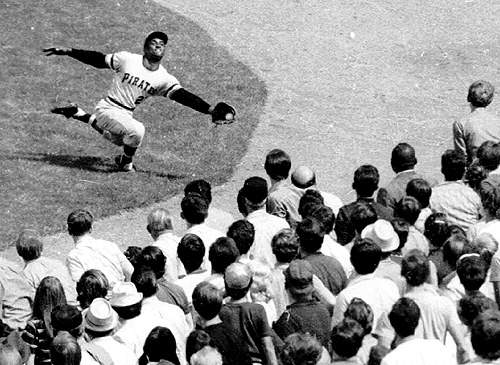 And it wasn’t like Clemente was a big guy.  He was just 5’11”, 175 lbs.  Contrast that to another legendary Pirates outfielder known for his cannon-arm, Dave Parker, who went 6’5”, 230 lbs.  Clemente was lithe and quick, but ran with a mad abandon.  There wasn’t a fly ball to right that he couldn’t run down.  And if you’ve ever seen footage of him, it probably included the shot of Roberto rounding second in the 1971 World Series and scrambling into third with a triple.

Ah yes, the ’71 Series against the Orioles.  That was Roberto’s “coming out party.”  I remember watching that as a boy, after racing home from school because they were still playing the World Series in the daytime.  Roberto hit .414 in that series with 2 doubles, a triple and 2 home runs.  But there is one play that will always be seared into my mind.

With a runner on second, the batter hits a fly ball down the right field line.  Clemente sprints after it and catches in stride right near the foul line, facing the wall.  In one motion, he whirls and fires a laser to third base, trying to catch the runner tagging from second.  The ball is dead on, arriving at the same time as the runner.  The ump called the runner “safe,” but it couldn’t have been by much.  The third baseman, Rich Hebner, later said that he thought the runner was out, but the ump should have made that call out of respect for the power of that throw.  Tagging to third on a fly ball to right is practically a given.  And Roberto was 37 years old when he made that play, practically a senior citizen in “baseball years.”  (You can see part of the play at the 1:20 mark of the video below.  Gives me chills, every time.)

Sometimes when I’m at the ballpark, I look over at the spot where he made that catch and imagine a throw making it all the way to 3rd.  You sure as hell don’t see throws like that any more.

The Orioles coaches surely took note.  Later in the series, they had a runner on 1st when a batter hit a double to the corner in right field.  Clemente snagged it off the warning track and uncorked another screamer towards the plate.  I remember seeing the highlights as they showed the catcher standing on the plate.  The ball bounced off the turf about 10 feet up the 1st base line and came to him about waist high.  As he quickly looked up the third base line, all you could see was the runner scampering back to the bag on third.  No one else was going to run on The Great One.

I saw Clemente play with the Pirates a couple of times when I was very young, but I only really remember the last time.  The Pirates were playing the Cubs, July 1, 1972, at Three River Stadium.  My brother and I were there with Dad and our Uncle Ange and cousin Michael.  Clemente hit a home run in the 7th and then a walk-off 2-run homer in the bottom of the ninth to win the game.  We just went nuts in the stands. 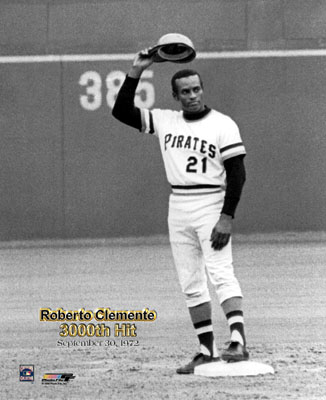 When an earthquake devastated the country of Nicaragua in December of 1972, Clemente threw himself full force into sending supplies to the stricken people.  He raised money and sent a plane-load of food and medicine into Nicaragua.  Upon the plane’s return, he was horrified to hear of the rampant corruption of the Somosa government.  The military was hijacking the supplies and they were being warehoused for internal government use; not getting distributed to the people in need.  It was then that he decided he had to go and personally see to it that his supplies got where they needed to go.

He said, “Let them tell Clemente that they are taking his supplies.”

And so on New Years Day, 1973, I was watching the college bowl games with my dad when an announcement came on the screen that a cargo plane carrying supplies for Nicaragua had crashed into the sea after taking off from Puerto Rico.  The Great One, Roberto Clemente, had been on board and was presumed dead.

I was 11.  My mind raced, much in the same manner as did the minds of countless millions… “Maybe they just haven’t found him yet… maybe a boat will spot him… maybe he’ll swim to shore…”

As the evening went on, the news didn’t get any better and I had to wrap my mind around the idea that Roberto was not coming back.  In fact, his body was never recovered.

That was the night that I learned that life isn’t fair and even heroes can die.

The crime of it all is that it did not have to happen that way.  The owner and pilot of the plane had his license suspended for the prior 180 days.  The plane was a heap of junk, held together with duct tape and a new paint job.  It had been overloaded by more than 4000 lbs and had not been properly balanced.  There were so many opportunities lost to either ground the plane, or obtain a better one.

Such an unimaginable waste.

So we have our memories.  Wild cuts at balls 6 inches off the ground…  Rounding bases with hat flying, elbows flailing, knees churning… Rocket throws from the deepest corners of the outfield…

He was a great player, and an even better man.

Rest in peace, amigo.  You earned it.

You can say that he’s still here,
In all the kids who watched him play
In those glory years.
Now things have changed and it’s not the same
But I got a chance to see him play
And I know there’ll never be another, under the sun
Like Roberto, old number 21.
Arribaaaaaaaa… The Great One!”

Director's DVD Commentary:
This is a post I always intended to have here. But when the Cherlocks asked me to do a guest post at New Years, near the anniversary of Roberto's death, the timing seemed right to post it there and then. But I knew I was going to re-post it here at some point. This one was too important to me not to have residing here.

January, 1973 I begin to teach a freshman comp class at OSU. My question: What event has changed your life forever?
One 19 year old replies: "The death of Roberto Clemente. I never thought a hero could die."

Mary Ann,
Good to know that it wasn't just me. And when I was 11, I'd have thought someone that was 19 knew everything.

Great post. Such a shame. They're replaying game 7 from the 1971 World Series on TV tonight.

DG,
Wish I could get ROOT Sports out here. My brother has the DVDs of each of the 1979 Series… wish they’d release the 71 Series as well… To me, it would be worth it just to have a pristine copy of those 2 throws…

Have you ever thought about just adopting a son so you could pass down to him the wonderful things your father passed down to you? Like the love of sports? And the way it bonded the men in your family?

Thanks for stopping by my blog for a little jukin'! I agree that all songs on the Rockola should be oldies!

Judie,
That passing on is already happening… it’s just that it’s my brother doing it with his sons. He coaches both of their baseball teams and is right there for all the others. I chip in where I can, mostly by suggesting various ways to mess with people.

Not sure about the “oldies.” I’m more partial to Classic Rock. To me, everything before 1967 is oldies, after that it Classic Rock.

I remember one time when I was managing the record store in the late 80s, we had this rack of discount cassettes up at the front of the store… Aerosmith’s Greatest Hits, AC/DC’s Back in Black… First couple Van Halen albums, stuff like that. Some kid comes up to the rack and says to his friend, “Hey look, they have ‘oldies.’

I almost slugged him.

But yes, Roberto did, indeed, rock.