Pittsburgh Trip - The Other Stuff

The weekend before last, I went to Pittsburgh, went to my cousin’s wedding (which I posted about) and co-hosted the Bag’O Fish BBQ (which I posted about).  This post is about the rest of the stuff from that weekend.
I let nothing go to waste when it comes to mining my life for blog material.
Since I already had a dry-run trip to the Burgh the prior weekend (which I posted about), I wasn’t terribly worried about this trip.  I had my Diet Cokes in a insulated soft-side bag, I still had my tunes and I still had my GPS.  But also, I had my Check Engine light come on.  I didn’t notice it until I was about 18 miles down the road, so I couldn’t be sure when it came on.  But I knew not to panic.  It just bugged me because it meant that now I had one more thing to worry about.  It was probably something stupid, like the gas cap.  But Big Silver ran like a top, so I didn’t pay much mind to the warning light.  I love having a car that has Woom.  (That means, when you need get around some fuckstick that’s been driving beside some other fuckstick on a 2-lane highway for 35 miles, you stand on it and it goes “WOOOOOOOOOOOOOMM!”)
About 15 miles inside the Maryland line, I saw that I got a message from the Carpetbagger, wanting to know what kind of beer I wanted for our blogger’s bash that Monday.  The rub was that I had to wait to answer.  Maryland is a no texting/no using-hands cell phone while driving state.  I had to wait until I got into Pennsylvania before I could call him back.  It would have been ironic if I, the one who hates talking on cell phones, were to get a ticket for talking on a cell phone.
I made it to my Breezewood checkpoint in decent time, and by that, I mean Wendys.  I rarely pass up an opportunity to go to Wendys.  I didn’t have very good timing though, because there were about a dozen people in front of me in line.  Wendy’s is usually pretty well run and they move the line, so I waited it out.  But naturally, there was one big family up there and they monopolized a good deal of time.  Meanwhile, I shot a text to my brother, to see where he was.  Turns out, he was almost to my Aunt’s house, about 2 hours ahead of me.  Guess they got an early start.
I heard the folks in line ahead of me discussing things they’ve found in their burgers.  Guy in front of me said he found a screw in a burger once.  He had one front tooth missing, so maybe that’s how it happened.  Anyway, I made the mistake of acknowledging the conversation so the next thing I knew, I got to hear all about 1-Tooth Guy.  I heard how he was unfairly pulled over by the cops for speeding.  I heard how he was unfairly fired from McDonalds.  I heard how he was unfairly harassed by park rangers over fishing without a license, even though they didn’t catch him with any no fish.
I couldn’t wait to get the hell out of there, before some of that unfairness rubbed off on me!
I made it out to my Aunt and Uncle’s house just in time to go straight out to the deck and hang with family and commence the weekend’s eating activities.  There was a lot of family out there, at least four generations worth.  Not only have so many of my cousins been getting married, they’re also reproducing like crazy.  It’s like Baby-Mania around there.
Lots of stuff was going on.  Grandpa was dispensing timeless advice to his great-grandchildren and to his pretty-good-grandchildren as well. 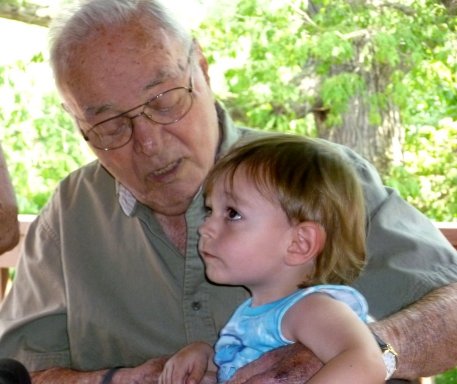 Grandpa drops some knowledge on Matthew; probably about the best time to plant tomatoes. 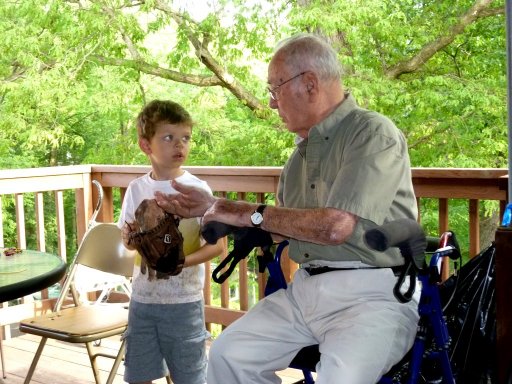 Grandpa schooling my nephew Sammy on how to break up a double play.  I think.
We had wiffleball going on in the back yard: 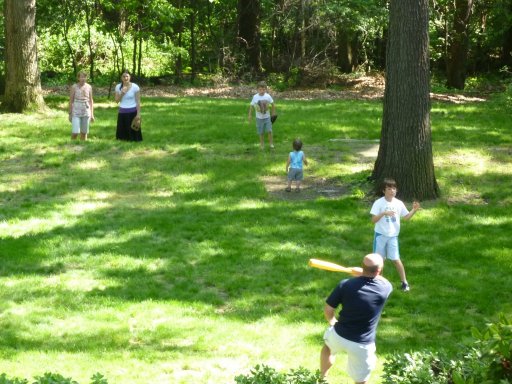 Not exactly a conventional alignment.  I think they were power-shifting against my brother.
We had introductions to the youngest cousin, EJ, whose birth to my cousin Angela, I wrote about here. 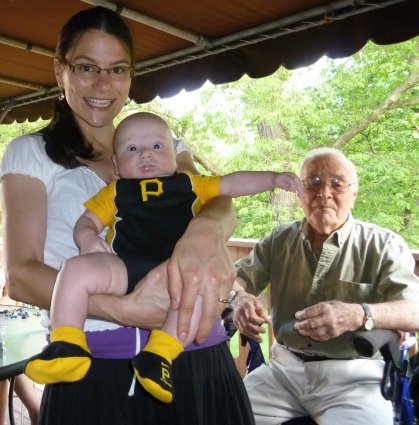 EJ rocks his Buccos onesy!
Then after some beers, some grilling and some more beers (and wine) it was time to feed EJ.  Angela brought the baby out and presented him, stark naked, to his Grandpa Ange.  (The baby was naked, not Angela.) 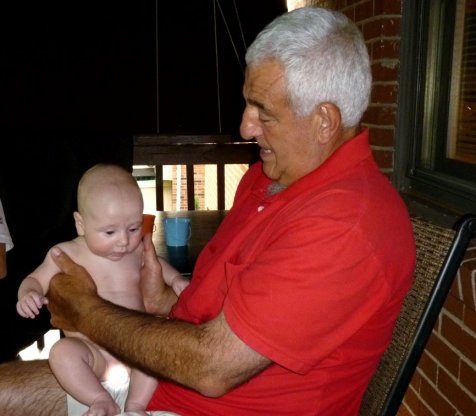 No, the boy’s peen is not glowing.  I figured I’d edit that bit out, to save me from the pedophile traffic.  I figure I can send the boy the original one day, in case he wants to send it to some hot chick with whom he’s Twittering.
Eventually someone brought out a bib for the boy, which was immediately tied around his… waist!  Why ruin Grandpa Ange’s golf shirt? 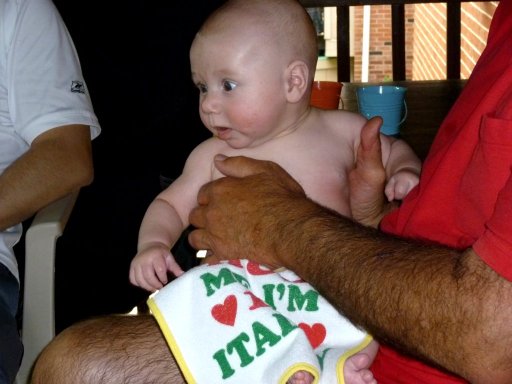 The bib says, “Kiss me, I’m Half-Italian.”
So the boy got fed, then got a change of clothes. 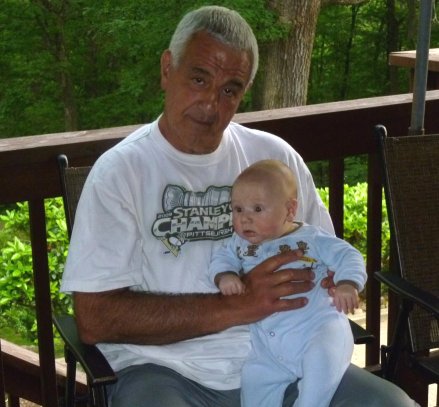 So did the Grandpa.  Like the boy wasn’t going to pee on his Grandpa anyway?  That’s how babies mark their territory.
We stayed up half the night just yakking and drinking wine.  It’s just what we do, besides eating.  That night merged right into the next morning, which found us all up and back at the kitchen table.  Only now, we were eating breakfast food instead of dinner food.  Still drinking, though.  Had to have those traditional Sunday Morning Shots. 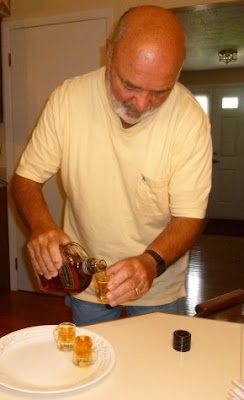 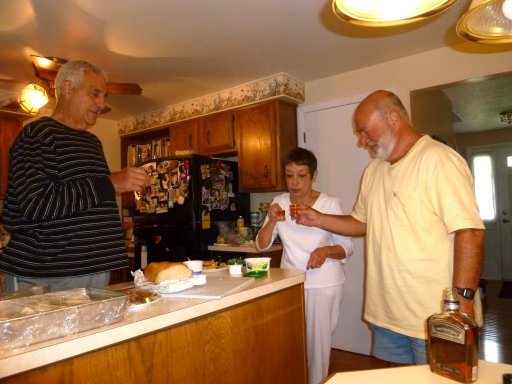 Salute!
It’s fun when we get to sit around and visit.  Sometimes I get to hear stories that lend some insight as to why things are the way they are.  Like when Uncle Ange was talking about how my Grandpa knows everything, from how to plant tomatoes, to when to bury the fig tree, to how you should empty the garden hose of water before watering your plants (the water is heated from the sun) to how to prune hedges and cut grass, to how to dunk your biscotti in wine, etc.  And woe to those that don’t follow his directions.  Uncle Ange said that long ago he learned to just do what Grandpa told him, because in almost every case, the Old Man was right.  He didn’t do anything arbitrarily.  He had a lifetime’s worth of experience and knew the best way to do certain things.
So now I know where I get it.  I don’t mean all the gardening expertise, but I do have ways of doing things the to me, make the most sense.  And I don’t get why everyone wouldn’t want to do things my way.  In fact, I did a post about that once.  Anyway, I mentioned that at the table and the response was unanimous:
“Poor Pinky.”
Meanwhile, Sammy broke out the Smurf Village to play with.  You know, I never knew that the Smurfs actually lived in little penis replicas.  See for yourself… 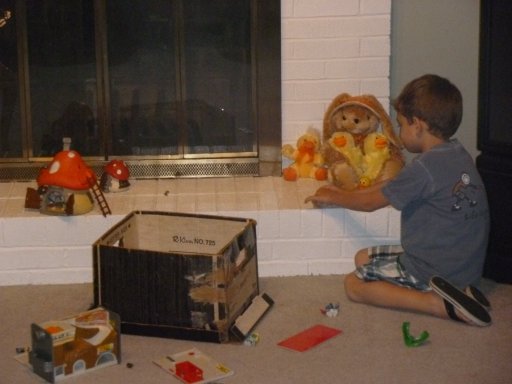 Watch out, Sam.  There’s a congressman that wants so send a picture of that Smurf House to some girl…
I shouldn’t have had those shots though… I had a decision to make that afternoon before the wedding and the shots made it that much more difficult: 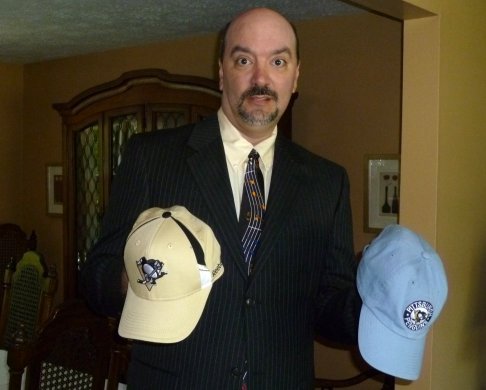 Which ball-cap goes with the suit?
The wedding went off well, as I already blogged, and next thing you know, it’s Memorial Day Monday!  Same routine though… sitting around the kitchen, eating eggs and homemade sausage, juice…
I swear, before I started getting ready to go to the Bag’O Fish BBQ, my Aunt wanted to feed me again.  Seriously!  I was like, “But I’m about to go to a barbeque!”
She says, “But they might not eat until later, you might get hungry.”
I learned long ago not to argue with my family about eating, because my answer is basically irrelevant.  Whether I agree to eat or not, food will appear in front of me.  I might as well just accept it.  So that’s why I ate before I went out to eat.
I left for home on Tuesday, but not before stopping off at a local market for some Pittsburgh delicacies: 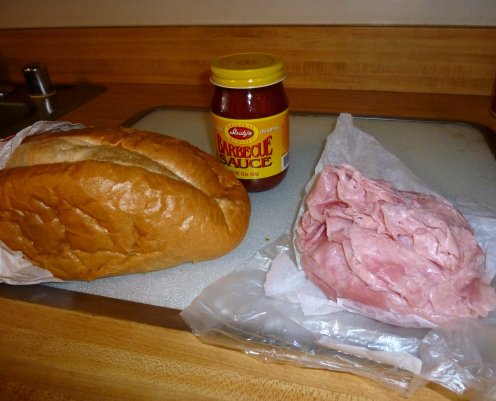 Isaly’s chipped chopped ham and BBQ sauce, and Mancini’s Italian Bread.
I knew that there was going to be a major Sandwich Event on my horizon.
I wasn’t terribly worried about getting through town… I’d made this trip several times before, so what could go wrong?
I’ll tell you… My goddamned GPS.  Or rather, me not listening correctly to my goddamned GPS.  As I was sailing through that series of ramps before crossing the Allegheny and hitting I-376, I heard “Keep right, then keep left.”
So I kept right at one fork, and then took a left at the next fork.  Which was wrong because the GPS always gives you your following step, after a direction.  So I “kept left” before I was supposed to keep left, missed my turn, and took (another) scenic trip through downtown Pittsburgh.
At least the GPS led me out the other side.  After that, it was clear sailing.  I didn’t even stop at Wendy’s this time.  (I was still full from the weekend’s feasting.)  I barely had my bag unpacked before I hit that sandwich stuff. That, my friends, was a work of art.  Granted, I could have used some provolone instead of Kraft Singles, but you make do.
Wednesday morning, I was NOT in the mood to go back to work.  Who would be, after all that fun?  But I had to pay it back.  I got on the scale and saw that I gained 7 pounds in 4 days.
Sigh.  Guess who’s been having salads for lunch?
Posted by bluzdude at 8:16 PM

Email ThisBlogThis!Share to TwitterShare to FacebookShare to Pinterest
Labels: Bluz LIfe, The Burgh, The Family Business, The Glory of Meat