Somehow, I’m managing to make some blog friends that aren’t in Pittsburgh, and one of them, Misty at Misty’s Laws, gave me an award this week.  Misty is a lawyer that works in downtown Baltimore, just like yours truly.  (Except I’m no lawyer… I’m not even a paralegal.  I’m more like a paratrooper.  OK, I’m not one of those either.  I’m more like a parawordwriter guy.)

Sometimes Misty posts pictures of the oddly dressed people she sees downtown.  I always read these carefully, not only to try to identify where she took each picture, but to also make sure I’m not in them.  But for whatever reason, she saw fit to bestow upon me the Kreativ Blogger Award. 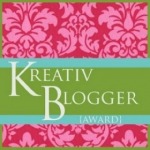 As you may remember, The Pedestrian Writer laid this on me back in April, and I went through his drill of listing seven things about myself.  So now I’m Kreative squared.  K2, babee!

Misty’s version also comes with some instructions, but I’m ignoring half of them.  Yes, I thanked/linked her.  (Wait… did I actually say thank you?  Scanning… scanning… nope… Hey Misty!  Gee thanks!)  No I’m not listing 10 more things about myself.  No, I’m not passing it on because I just did that last month.  But yes, I’ll answer the 10 questions, because they were probing, insightful, and I already answered them in my head as she was giving her own answers.

1. What is your favorite song?  Easy: Meat Loaf’s “Bat Out of Hell.”  It has the perfect combination of screaming guitars, oddly creative lyrics and one incredible, wall-shaking voice.  I have other favorites for different occasions… sometimes it’s just not the right time for an 8-minute, wall-shaking rock opera.  But over the test of time, The Bat stands up.

Long time readers may remember a post I did about why Meat is my favorite singer.  (Great songs, best rock singer ever.)  I also got to actually meet Meat, back in 1993.  He was a real gem; the nicest guy you’d ever want to meet.  You could tell that meeting the fans was something he genuinely liked to do.  I wrote about that, here, as part of a 10-part series on my adventures in the music business.

3. What ticks you off?  Inconsiderate, self-absorbed, entitled people, who I so often find driving their cars in my vicinity.  “Hey dipshit!  Put the fucking phone down and use your goddamned turn signal!”  What I wouldn't give for dual hood-mounted water cannons.

4. When you’re upset, what do you do?  Drink heavily and swear profusely.  Then that is followed by long periods of deathly silence while I plot my revenge.

5. Which is/was your favorite pet?  Oh my.  There are two that I will love and remember fondly until the day I’m in the ground.  When I was 15 we got a Siamese kitten and Golden Retriever puppy around the same time. 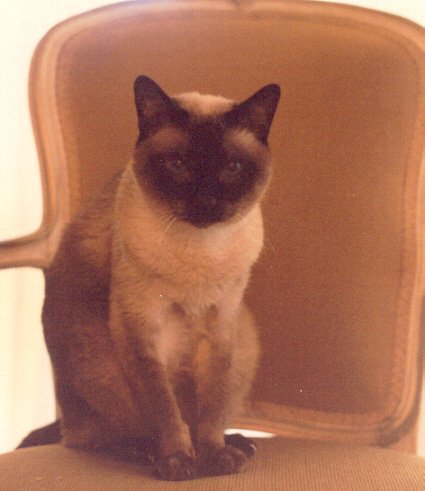 The Golden was my Jesse, a present for my 15th birthday.  I can’t even begin to write about her.  She was killed by a car when she was 4 and it absolutely tore me apart.  God, I loved that dog.  I’m sure I have an award-winning post rambling around in my head about her, but I guarantee my keyboard would short out before I could get it all down.  I still have dreams about her, 30 freakin’ years later, after which I always wake up happy to have seen her again.

But that’s the problem with writing about old pets… it always ends the same way.

6. Which do you prefer, black or white?  Black goes much better with my Penguins and Steelers attire, so probably black.  But I do like to sport a white shirt in the summer, after I’m all tanned.

7. What is your biggest fear?  In practical terms?  Approaching and talking to people I don’t know.  (I’m not counting all the horrible ways one can die like getting eaten by sharks or falling out of a roller coaster… I mean, everyone is afraid of that stuff…)

This also counts calling people I don’t know.  It makes me break out in a cold sweat.  I have to have squarely in mind exactly what I’m going to say, otherwise I’ll stutter, stammer and freeze up all over the place.

Case in point: Last Friday, we had a tornado warning downtown. My boss asked for my help, which I gladly offered.  But then she said she wanted me to go to a couple of surrounding floors and tell everyone to get to the bottom floor.

Um… no.  Can’t do that.  I can’t go running around like the office building’s Paul Revere… “A tornado is coming!  Everybody run for the fruit cellar! Auntie Em!  Auntie Em, it’s a twister!”

And I didn’t.  But later, as we were waiting down below, I decided that we weren’t getting enough information.  Where’s the storm? What direction is it moving and how fast?  So I went back upstairs to my computer (which is right by a window) to consult weather.com and get a look at a radar screen.

That’s right.  I’d rather risk getting my head sliced off by a tornado-blown pane of glass than go talk to a bunch of strangers.  That’s messed up, right there.

8. What is your attitude, mostly?  Pre-planning seriousness marked by occasional fits of whimsy.  I can be very task-driven, but yet I always strive to keep the room light.  So call me “Sybil.”

9. What is perfection?  A weekend where the Ohio State Buckeyes, the Pittsburgh Steelers and Pittsburgh Penguins all win.  Also, Tina Fey and Cat Deeley.

10. What is your guilty pleasure?  That’s hard to say.  I don’t find that pleasurable pursuits are something to feel guilty about.  We have to make the best of the time we have here.  So why not enjoy ourselves?

But if I had to pick something, it would probably be reality TV.  (And I mean the good ones like Survivor and Amazing Race, not crap like Real Housewives of Upper Sandusky, or Next Top Ear Piercer.)

So, those are my 10 answers.  I hope that they were suitably Kreativ.  I'd hate to have to forfeit the award...
Posted by bluzdude at 8:03 PM

Oops. See, this is the problem with giving awards to bloggers I just started following. Not going over all the old posts, I don't know if they have already received the awards before. Oh well. Is there such a thing as being TOO awarded? Too many accolades? Is that a thing.

You deserve it, though. You are definitely Kreativ. :)

Gee, you'd think that being a lawyer, you'd be versed in covering all your bases and investigating all the angles...

Nah, I'm kidding. I so appreciate the nice thought. And it's not possible to be Too Awarded. I bask in the pool of good wishes that I've managed to yank out of people over the years.

I need to email you my pecan pie recipe, made with Steen's Louisiana cane syrup. No corn syrup for us! And the recipe goes back generations, so no, we don't make it that way to be trendy.

I'll probably have to send you the syrup too, come to think of it. I'm guessing they don't sell Steen's in Baltimore.

I think it would be better for all involved if you just sent the pie.

My stepbrother is mighty serious about his pecan pie, too. (PEE-can or peh-CAHN?) Last year for Thanksgiving, which is also his birthday, my stepmom bought a pecan pie instead of making one because she was busy TRYING TO FEED 20 PEOPLE, and he noticed that the pecans were chopped when hers are always whole and FLIPPED OUT.

Ha...great minds think alike! I think six out of the seven people I gave the award to already had it, but handing out duplicates was a lot quicker than researching.

I have two questions for your next "Hey Bluz, what do you think about...?" post. The topics are: Wisconsin's failed attempt to recall Gov. Scott Walker, and celebrities posing as hockey fans just because the LA Kings are in the Cup Final. Discuss...if you're interested.

I think the Walker recall campaign just goes to show how money buys elections. Walker spent a fuck-ton more money than did he opponent, because he had the entire Republican money-raising machine raising cash on his behalf. The possibility of his recall, I'm sure, sent a chill down their backs, once they realized that one of their stooges could be yanked out of office once he showed his true Big Business-Anti Worker allegiance.

As for the Kings fans? Eh, let'em have their day. They haven't won squat, ever. If NJ had any stars besides Bruce, Bon Jovi and Kevin Smith, they'd be at the games too.

Lastly, a hearty congrats on your new baby girl!

When I have become drunk enough in "karaoke situations," Mrs. Bagger and I have been goaded into trying "Paradise by the Dashboard Lights." The Mrs. can hold her own. I always drunkenly underestimate the range that Meatloaf displayed. I start shrieking at the high notes and it all ends so badly. That's what scotch will do to ya.

Back when I was in college, I had a number of karaoke situations... well, more like dance floor situations, where my partner and I would act out all of Paradise... But the dancing was a hell of a lot easier... There were times that I'd put on Bat Out of Hell in the car and sing along, and by the time I was where I was going, my voice was so roached out, I needed ASL just to get by.

Never sing with The Loaf, unless you know what you're doing. Loaf will mess you up.