Yesterday was Pinky’s birthday… I won’t say which one, but even though I’m still under the influence of bronchitis, I wanted to provide a memorable time for her.

We had decided to stay at a downtown hotel Friday night.  We like staying at hotels in town; it’s like a mini-vacation without the hassle of actually traveling.  This spring, I’d won a night’s stay at the Baltimore Inner Harbor Hampton Inn in a raffle, so we figured we’d cash it in for the occasion. 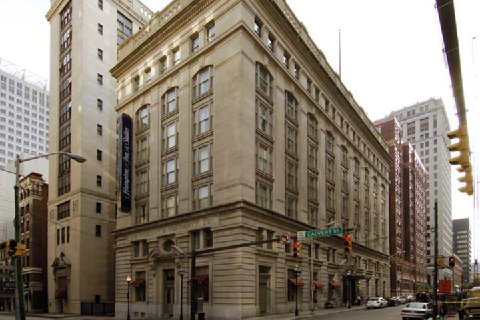 This is the Baltimore Hampton.  It’s the new thing in town; putting hotels into old banks and office buildings.

Since I work about three blocks from the place, I figured I’d check in before I went home to get Pinky, so that when we arrived later, we could just breeze right in.  I also needed to stop at the store and pick up a birthday card.  So I checked in, no problem, and checked out the room.  It was a little small, but nice.  Huge bed, good TV. 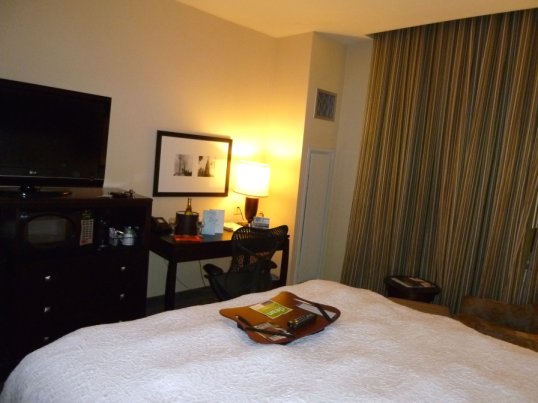 As I headed to Rite Aid, it dawned on me… I should get a bottle of wine or something, and this Rite Aid sold wine and liquor.  In fact, I could get some wine and snacks and stuff, and go back to the room and have it all set up ahead of time.  Eureka!

In truth, I should have thought of that long before it actually occurred to me.  I blame it on the cold medicine.  But anyway, after I got home and retrieved Pinky, this is what greeted her: 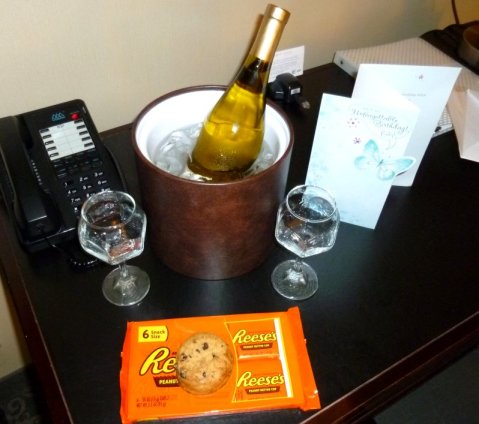 Reese’s Cups go with every occasion.

I smuggled the wine glasses into my bag without Pinky noticing.  What I didn’t realize until we got in was that I forgot to bring a freakin’ corkscrew.  GAH!  I used to keep one in my car for such occasions, but I’d just valet parked it, so I didn’t want to go down and ask them to bring it back, five minutes after I’d dropped it off.  Luckily, they had one at the front desk… I was pretty sure they would.  I know I’m not the first person they’ve seen in this predicament.

Funny thing about the room… I usually like taking home the little bottles of shampoo and whatnot, but this is what the Hampton has attached to the shower wall: 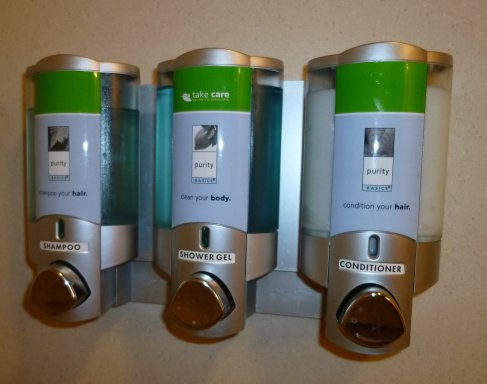 At first glance, I thought it was coin-op, and I was like, “where the hell do they think I keep my change?”

So while I didn’t get to take home any little bottles of shampoo, I was able to pry that dispenser off the wall with a letter opener.  It looks pretty good on my shower wall at home.

Before we went out to dinner, we stopped by the Inner Harbor, where there was an R&B band playing.  It was quite scenic, and the music was good. 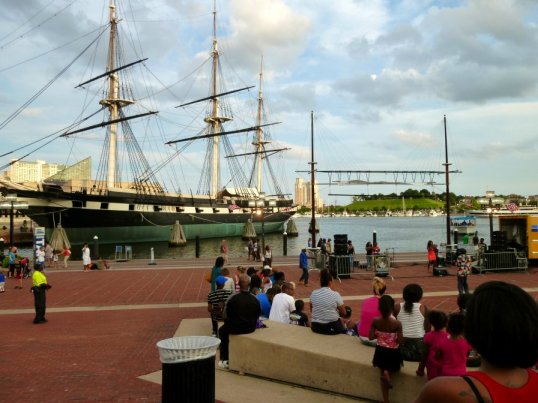 Eventually, some people got up to dance.  I think they were homeless. 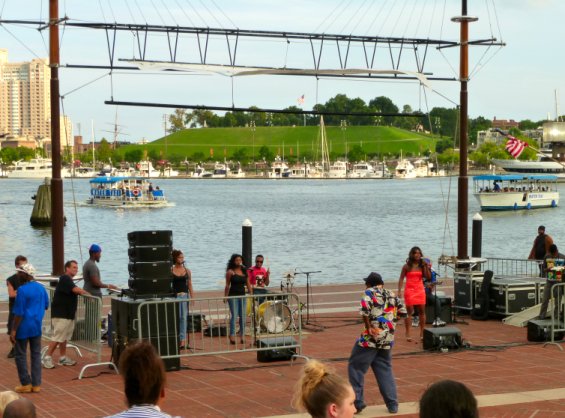 This guy’s doing the “Wino Boogie,” which is a variation of the “Stoner Skank.”  Pinky suggested the “Hobo Hop.”

Anyway, we had a nice dinner and some beers, and then went back to the room for a little wine and Olympics on TV.  Yes, we’re living large.  The place advertised free Wi-Fi, so I brought my iPad with me.

When she saw it, Pinky was like, “I decided that it was OK if you brought that… I wasn’t going to take it personally.”

This was good.  Pinky thinks of my computer (and now my iPad) as my mistress.  But it wasn’t like I was going to tinker with it all night.  I just wanted to see how it worked outside my house.  Well… that and check my email, answer comments and track blog stats.  And look at Twitter and see what’s going on with Facebook.

OK, maybe I do have a mistress.

While eating breakfast Saturday morning, we were greeted with the news that Mitt Romney chose his running mate, Rep. Paul Ryan.  Seems that the Republicans are doubling down on the “bloodless shill for big business” strategy.

I think he selected Ryan to shore up Tea Party support, to blow up the government and tear the whole thing down.  It makes our choice this November even starker.  I’m not alarmed just yet, because it can backfire.  Ryan has a tangible public record, which he now has to defend.  If the Democrats do a good job attacking the Ryan Budget, it could well cost the Republicans a great deal of senior citizen votes, as well as those of others that are not filthy, stinking rich. 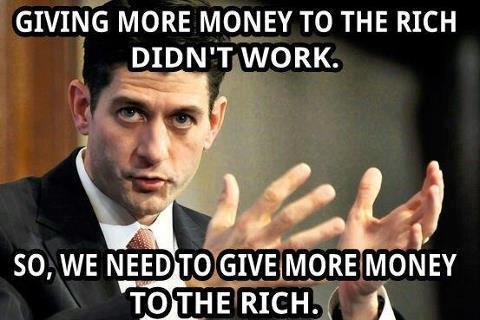 Anyway, Happy Birthday Pinky, and thanks for putting up with me.