Thank you for all your concern about my health, as referenced by the comments on the previous post.  And if you haven’t seen them, you should be sure to check out the comments my parents left, about how my dad had to fight off a cardinal who was eating one of his prized figs.  You can’t make this shit up. 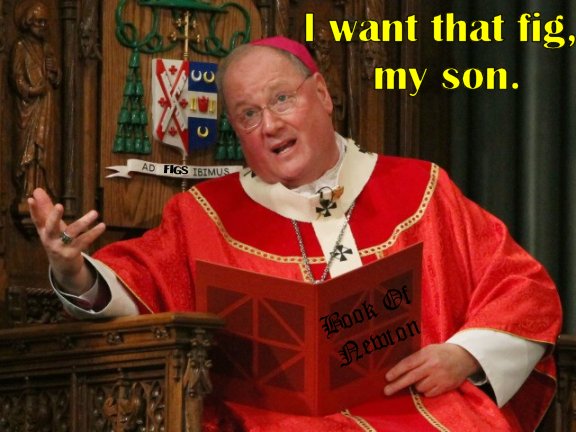 OK, it was probably the other kind of cardinal, but wouldn’t this have been funnier?

When I got up on Wednesday, I became worried.  Unlike the previous mornings, I couldn’t make a “productive” cough, nor could I get a deep breath.  Now, I thought, it might be time to see a doctor.  Plus, I have to do something soon if I want to use up my Health Care Spending Account money without buying several hundred dollars worth of saline.

But you know me… I’ll do anything to avoid a hassle.  I have a Primary Care Physician, but she’s not terribly convenient to get to, nor did I think I’d be able to get in to see her soon or easily.  This was the doctor I selected primarily because she is female, and at the time, I knew I needed a full checkup, blood work, and prostate exam.

You always want a female doctor to do the prostate exam… small fingers.  Trust me on that.  You don’t want some big sausage-fingered oaf trying to jam his quarter-sized knuckle through your dime-sized bung.  (Not unless you want to sound like Cameron Frye when he notices the mileage Ferris put on Dad’s Lamborghini.)

Pinky had been after me to go see a doctor for weeks, so this time when she brought it up, I agreed that it was time, but was unsure of where to go.  She had been to a place called “Patient First” before that she liked.  It’s one of those “walk-in” places where you go for a quick once-over, so she looked it up on The Google.  It seemed reasonable and it was in a good neighborhood.  Don’t laugh… that was a concern.  I didn’t want to sit in some waiting room surrounded by crack-heads, stabbing victims and ringworm.

I figured I’d get up there early, get in and out, score some meds and get to work.  It was only 10 minutes away, so we made it up just after 8:00 AM when they opened.  There was only one person in the waiting room.

I did my preliminary sign-in stuff on a touch screen and 5 minutes later they brought me back to give some more detail and take scans of my driver’s license, insurance, and prescription cards.  A few minutes later and they called me back for my initial screening.

I got my BP, height, and weight taken.  The weight thing pissed me off.  Remember how I said I’d lost 5 pounds over the weekend?  According to their scale, I’d gained 16 pounds back since then.  Of course, I was fully dressed, with shoes on, but still… It must have been my wallet.  Guess I better clean it out.

Then it was on to the curtained off exam room, where I was joined by the jovial Dr. Stein.  He poked and prodded a bit and asked me about my symptoms, etc.  Yadda yadda yadda… had me put on a gown and go get a chest x-ray.

I hate those gowns.  Even though I got to keep my pants on, they’re still diabolically hard to tie behind you.  I felt like a dog chasing his tail.  Luckily the tech that came to take me to X-ray helped a brotha out.  I have to be careful; as someone with a recently healed rotator cuff, I have to go easy on the ‘reach-around.’

The x-rays turned out to be clear; no pneumonia, no dark spots or cancer, just a little bronchitis.  First, they had me suck on this medicinal mist-producing thing for about 10 minutes.  Then the good Dr. came in with a full array of medicines for me: an inhaler (with the same stuff I’d just inhaled), a steroid to reduce the inflammation in my lungs and an antibiotic to kill all the biotics, I guess.

I think Dr. Stein is a frustrated Catskills comedian.  As he was going over the medicines with me, he was like, “And if you start to feel hostile, like you’re going to come in here and start shooting the place up, please wait until I’m off duty.”

“When you pull on the inhaler, suck it deep into your lungs, like you used to do in college.”

He’s probably delivered that speech a million times by now.

I am worried about the steroids, though.  I’ve always written my blog clean and have never used performance-enhancing drugs.  Now on steroids, will I not have an unfair competitive advantage?  Will I be able to type longer and faster with less recovery time?  And what if I want to get into the Bloggers Hall of Fame?  My next week of posts could be held against me and I’ll become the poster boy for chemically enhanced blogging.  I could become a pariah and have to resort to selling autographed posts from a card table, just down the block from Pittsburgh Podcamp, or BlogHer… So close to the promised land, yet so far.

Anyway, I came away from the experience in love with the place.  They had everything I needed, right under the same roof.  The X-ray and the Pharmacy were all right there.  It was Anti-Hassle Medical Care.  Even the pills came in easy-dosing containers, almost like birth control pills. 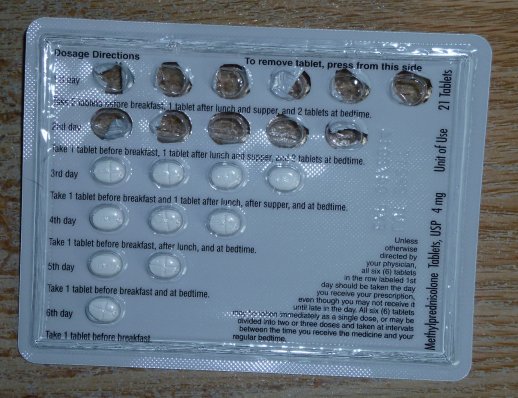 These are my steroid pills.  I take one row per day.  It looks like a lot but they are very low-dose pills.  The antibiotic came packaged similarly.

When I last went to see my giant hospital-based Primary Care Physician a couple years ago, to get blood work and my hip checked out, I had to go all over the place.  While she took my insurance, the X-ray lab didn’t, so I had to go somewhere else.  And the blood lab didn’t take it either, so I had to go to a separate lab to get stuck.  And I don’t have some fly-by-night insurance, either.  It’s Aetna, for crissakes, not “Fred’s Insurance!”

Right now, I’m inclined to make them my PCP, but I figure I’d better hold off until I see how the billing goes.  That’s a whole new level of prospective hassle.

So as of tonight, the meds seem to be working.  I’ve hardly coughed all day and am breathing better.  The only down side is that I’m losing the best way to keep a subway seat to myself.  For the last few weeks, anytime I was alone on a seat when new people got on, I’d let go a couple of big soupy coughs and people would go to the other end of the car.  People avoided me like I was a slouched over gang-banger trying to sleep.

There’s nothing like the threat of loogey splatter to get a dude a little elbow room.
Posted by bluzdude at 7:12 PM

"Stay thirsty, my Friend." And STAY WELL!
Health Care can only get better.

And that bunghole comment made me choke on my water. Glad you're finally getting some professional help.

Glad you're feeling better and good to know that you're still focused on your phlegm situation. These urgent care places like Patient First are the best. Our son who lives in Shadyside (college junior) was sick a few weeks ago...so sick that he could not raise his head above the pillow and could not drive himself anywhere and no roommates were around during the weekend (well, one was but she was too busy hanging out with her boyfriend to be bothered to come home and drive him to the doctor). So we trapsed out to the 'burgh from the other 'burg (Harrisburg) and took him to UMPC Shadyside's urgent care place (less than a mile from his house) on a Saturday evening around 7 pm. That place was AMAZING. A liter and 1/2 of IV fluids later, his fever of 102.5 started to go down. They tested him for mono (negative, thankfully) and gave him a z-pak prescription. There was no waiting, and the doctors and nurses were great. These places are such a better option than going to the ER or having to wait days to get an appointment with your primary care physician.

I love those commercials. I gotta do something like that.. The Most Interesting Blogger in the World...

I'm so glad someone caught that. That whole joke/photoshop was a last minute addition.

And any time I can cause a spit-take, I call it a win.

I've been fortunate that I've never needed the emergency room before; it's an experience that I'm not eager to endure. I guess I've been lucky, having grown up before bicycle helmets, knee pads or helicopter parents.

I've used those types of places for my kids. Much easier than trying to get them in to their normal doctor!

It's about time the medical profession did something to make things easier for the patients!

Waitaminute... there's a Bloggers Hall of Fame?? Pass the meds, my friend!

On a serious note, I'm very glad to hear you finally went to the doc - I was worried after reading about hocking up the butterscotch, and the crippling back pain.

Back to the humor - you do realize the pills you're taking are made from the hormones of pregnant mares? Nope, I'm not making that up.

No wonder I woke up this morning, craving oat bran...

GAH! Bronchitis may be no big deal to a doctor, but it sure does make you feel like cat crap on spork. I'm glad you went and got checked out! Here's to a speedy recovery!

Hold off your judgment on "Doc-in-a-box" until your bill comes. Some insurance companies ream you for going not going through a preferred provider and recommends you to a specialist. Maybe this place is different.

Last time I was at one of those places was when I was on vacation and had a virus attacking the skin next to my eye. My eye was almost swollen closed. All the "docs" were interns who had never seen such a thing before. They all crowded in the room to get a look. Someone in the back literally yelled, "Somebody get a camera!"

I knew I was screwed.

Nope, no Bluzbabies for me. I’ll stick with my Bluznephews, who someone else has to put through college. But if I did have any, they would be adorned in black and gold from the moment they were born and swaddled in a Terrible Towel.

Thanks MBG. It's still hanging around, but I'm feeling better every day.

Yeah, I'm definitely waiting for the billing to close, to make any further decisions. It should be OK though... I mean, they took my card and charged the proper co-pay. Good signs so far.

And my Dr was a grizzled veteran... not a snot nosed kid at all. But I'm glad that I just had a run-of-the-mill bronchitis, and not some exotic eye disease that because a test case for interns.