If you've been on Facebook lately, you've probably been seeing a lot of “=” signs in people’s statuses.  No, it’s not a countrywide celebration of mathematics.  People are showing support for marriage equality, meaning the right to same-sex marriage. 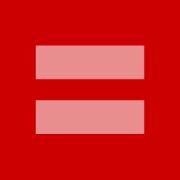 My blog sister, Cassie, have already weighed in on the matter, as did the Carpetbagger on Facebook.  I’ve been on the fence (regarding blogging the topic) because I’ve trod this path quite a few times before.

I’m sure you know where I stand on this.  While the issue doesn’t affect me directly, it affects a number of friends and acquaintances, and thousands of good people that I don’t know.

I’ve obviously been following reports on the dual same-sex marriage cases before the Supreme Court, to overturn California’s Proposition 8 (banning same-sex marriage in the state) and the Defense of Marriage Act or DOMA (banning federal recognition of same-sex marriages, regardless of legality in any particular state).

It’s funny to me, the lengths the opponents of same-sex marriage will go to make their case, while avoiding the obvious reasons for their opposition: Religion and the Ick Factor.  In the California case, they made it about childbearing, saying that since same-sex couples can’t “accidentally have children,” there is no compelling reason they need to be married.

Seriously.  That’s what they’re hanging their hat on.  And it’s no wonder, because they cannot win this fight with any rational argument.  Religion?  Gone… this country isn’t governed by the Bible, (or any other holy book) and if it was, there are a ton of other Biblical assertions that no one would ever conceive of adopting, (like pretty much all of Leviticus).  That leaves the “gay sex is gross” argument, to which the obvious solution is “Then don’t have any.”

To me, there would need to be a compelling, nation-threatening reason to deprive a percentage of our population the right to marry (or any other right the rest of us have).  Being uncomfortable is not one of them.  I’m uncomfortable with calling strangers on the phone, but you don’t see me protesting outside Verizon.

Again in the Prop 8 case, Chief Justice Roberts mentioned something truly appalling to me.  He was quoted as saying that marriage has been limited to a man and a woman “since time immemorial.”  What this means is that he is hesitant to remove this institutionalized discrimination because it’s been around for a long time.

I would ask the Chief Justice how long corporations weren’t people, before he granted them full 1st Amendment rights in the Citizens United case.  He didn’t seem too concerned with precedent then, did he?  No, just like most Republicans in charge, they’re only for full freedoms when it suits Republicans.

And it’s not like we’re just talking about semantics with this issue.  There are over 100 federal effects and benefits that hinge on the definition of marriage.  It’s a big deal with tangible and often very expensive ramifications.

It always kills me when I see the opponents arguing that no one group (meaning the gays) should be singled out for “special rights.”  That makes my head explode.  Since when is ensuring that one group has the same rights as everyone else considered “special?”  One right, applied to all, period.  I guess if one group is going to receive “special” persecution, then they need “special” protection.  When the former goes away, so does the need for the latter.  But as we know, the Civil Rights turmoil took place in the 50s and 60s and we’re still waiting for the prejudice to die out.

Unfortunately, those that read the Supreme tea leaves seem to think they will rule narrowly, overturning Prop 8 in a way that the fallout is limited to California, and possibly ducking DOMA on a technicality.

The key to the whole thing is Justice Kennedy.  He stands between the 4 hard-core conservatives and the 4 raging liberals.  Kennedy has ruled in favor of gay rights twice before, and the State Supreme Court Judge who overturned Prop 8 wrote his opinion in a way designed to appeal directly to Kennedy.

This country is based on the principle of equality for all.  And that has to extend to everyone, not just to people that think and act like the majority.  There is no valid reason to deprive citizens of common rights based solely on the characteristics with which they were born.  Now would be a good time for our highest court to remind everyone of that fact.

I would really like to see the Supremes drive a stake in the ground here for marriage equality, but I’m not optimistic.  Even if 58% of the country is ready for it, at least 4 people on the bench are not.  I don’t think they want to history to look at them as social revolutionaries, but I’m afraid, instead, that they’ll be viewed like those who ruled on Plessy vs Ferguson (creating “separate but equal”).

In other words, in 50 years, people will be wondering what the hell was wrong with us, back in the early 20-teens.
Posted by bluzdude at 6:16 PM

I have my fingers crossed on this one, but I agree with you that the chances are only so-so. The good thing though: everyone is talking about gay marriage. What a difference from just a few years ago! I saw a funny bit on Jimmy Kimmel last night where they were asking people on the street their opinions. Those who were against got straight up booed by the audience! This gives me hope

I'm glad that the culture seems to be moving by leaps and bounds on the issue. The problem is the loud little pockets of ignorance and intolerance that mask their prejudice behind the Bible. Politicians have kowtowed to these groups for so long, they don't know how to stop.

I hope DOMA will be struck down. It is clearly unconstitutional. But I think they will opt for states rights and leave California to the voters, who soon will repeal Prop 8 anyway.

I wish someone who knew their Bible would respond to Judge Roberts by reminding him that in "time immemorial" Abraham, David, Jacob and many other patriarchs had many wives and concubines.

Plus, as you know, marriage for love is a rather new phenomenon. It was traditionally a business transaction merging the economic futures of two families, with the women seen as property. Likewise, "homosexuality," as mentioned in the Bible was not referring to two people consensually committing their lives to each other in love. It was about wealthy older men keeping young slave boys as "mistresses." It was about power and control. That's why Paul wanted it stopped.

If the religious right is going to insist on making the Bible the basis for law, I want my concubines! I just wonder where to go to get them... Concubines R Us?

Amen, sir. It just makes me bat shit crazy that people think that marriage is sacred, but you have jagoffs like that Kardashian chick who got married for two seconds and spent millions on said wedding. Yet we won't let good, kindhearted people who happen to be gay be married for a lifetime. I wish people would get off their damn high horses. To me, it feels like we're supposed to be in a secret club, and those who aren't in it, aren't cool. So, me being married should make me turn my nose upwards to anyone who isn't, right?

I could go on about this for hours.

I don't know why our culture always has to have someone to shit on. It used to be Blacks, now Illegal Aliens seem to be fitting the bill. And the one constant all along has been Gays.

We'd all be so much better off if we'd just leave people alone and mind our own business.

Thank you for writing about this topic. It's close to home for me.

That's the only way things will ever change... through the actions of those for whom this hits close to home. The more people that actually know gay people, the more we realize that there is no legitimate reason to keep them as 2nd class citizens.

Here! Here! It's absolutely ridiculous that people are punished for loving each other!

Check this out in the Bible: from David to Jonathan: "Thy love was wonerful to me even surpassing the love of women."
Ruth to Naomi: "Wherever thou goest I will go. Thy people shall be my people."
Thump on, Bible readers.

Just demonstrates how the people citing the Bible as the basis of their opposition to homosexuality is nothing but cherry-picking the parts that back up their existing biases.

Like we don't have enough other things we can fight about in this country?

AMEN! And they never condemn the inumerable atrocities from slavery to incest to rape, mutilation and murder of women their Bible cites as not only acceptable but mandated by God.

I've read through several comment threads where people were vehemently arguing against same sex marriage, and I tried REALLY HARD to keep an open mind and try to understand their points of view... but absolutely none of their arguments made logical sense.

The worst is when opposers start saying people will be marrying their pets next. Yea, because two consenting adults who love one another is the same thing as a person and a dog.

People are morons and I just don't understand why they are so against something they don't take part in.

That's what people are left with, when they can't win an argument on merit... Scare tactics and fear mongering. Luckily, every day that goes by, another person learns that a friend is gay and realizes that they do not threaten anyone's way of life.