Ode to a Naughty Man

As is bound to happen to an 8-8 team in the off-season, the Steelers have begun shedding some of their veterans.  Yesterday, they announced that they were releasing 35-year old linebacker James Harrison, a former Defensive Player of the Year and wrecker of opponents’ dreams.

I feel bad for my nephew Sammy, who a couple years back, bestowed upon Harrison the name mentioned in the title.  In that season, Harrison had been in the news for getting fined for hard hits.  As Sam and his daddy were watching the DVD of Super Bowl XLIII, he said, “Oh, this is the part where Naughty Man scores the touchdown!”

Daddy said, “Why do you call him Naughty Man?”

Sam said, “Because he’s always getting in trouble.”  Five-year olds…

Sammy and I are both in the same position now, as owners of obsolete Naughty Man jerseys.  But I know I’m still going to wear mine.  James Harrison was one of my all time favorite Steelers, a throwback to a time when a defensive player’s job was to knock dudes out.  No guilt, no remorse, just destruction.

Harrison is not built like many football players nowadays.  He’s too short to be a prototypical linebacker.  He’s kind of like a fire hydrant with legs, and just as hard.

I first noticed Harrison during a preseason game, when he had a chance to take some snaps at outside linebacker while Joey Porter sat out with the rest of the starters.  He certainly looked like he belonged.  In fact, he was blowing up more guys than al Qaeda.  But there was one particular day that made me a Harrison fan for life.

There was this game against the Browns, in Cleveland.  Harrison wasn’t a starter yet, but was a maniac on Special Teams, covering kickoff and punts and such.  With the Steelers offense on the field, some dipshit Browns fan ran on the field.  Naturally, the TV coverage cut away, but you could sense that something happened.  By the time the game was over, there was a clip on YouTube, showing the event. You could see this guy jumping up and down and clowning around.  Then out from the sideline, James Harrison eased up behind the guy, picked him up in the air and planted him on the ground, like a WWE wrestler. 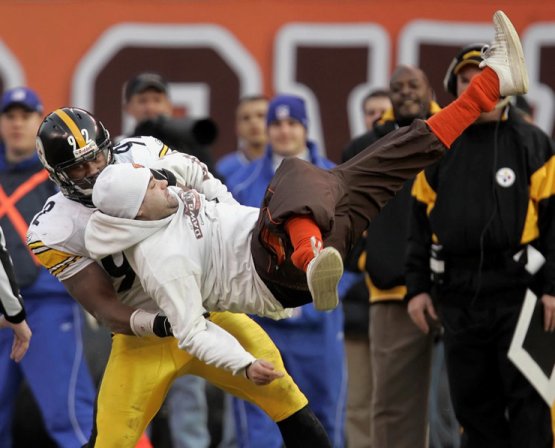 That was the day that Harrison announced to me, and to the world, that the Pittsburgh Steelers did not tolerate such foolishness.  To quote my favorite line from the movie “Zombieland,” he "set the standard for not to be fucked with."

Before long Steelers released Porter in a salary cap move and made Harrison the starter.

The “Zombieland” quote is apt.  Harrison played like a zombie… no, not one of those slow, lumbering zombies… the other kind.

You know that movie, “28 Days Later?”  It’s a zombie movie, but the zombies are fast.  They run after people in this crazed manner, like they are being driven by such rage that they can barely stay on their feet.  Their legs churn and arms pump and flail as they pursue their prey.

That’s how James Harrison looks to me when he’s blitzing around the end, coming after the quarterback.  And I bet if you could get a mind-read on what’s going on in his brain at that moment, it would sound something like, “AAAAAAAAAAAAAAAAAAAHHMO’KEELYOUUUUUUU!”

Harrison had his national “coming out party” on a 2007 Monday Night Football game against the Ratbirds.  He single-handedly destroyed Baltimore, and ended up with an absolutely unreal stat line: 9 tackles, 3.5 sacks, 3 forced fumbles, 1 fumble recovery and 1 interception, which he returned for 20 yards.  He hit Ed Reed on a punt return so hard that 3 days later, Reed was still yelling at people to answer that phone.

The following year, Harrison put up similar numbers in another game against the Ravens, with 10 tackles, 2.5 sacks, 2 tackles for a loss and a forced fumble.  It wasn’t a coincidence.  James always had it in for the Ravens, as they were the first team to sign him.  But they cut him twice, sent him to play in Europe for a year, and cut him again after he returned.  Apparently, it pissed him off.

I guarantee you that (Ravens GM) Ozzie Newsome wishes he had that one back.


Here are a couple of Harrison highlights, which include his hit on Reed, and dumping that drunk Brownies fan.  (1st and 2nd clips)

It was in the DVD for the Steelers Super Bowl XL win, that America first learned about Harrison’s nickname.  There was a scene where Harrison was coming off the field after missing an assignment on punt coverage.  Coach Bill Cowher came running up to him, yelling, “”What happened?  What happened?”

You could see Harrison mumble something and Cowher just cracked up.  Then laughing, Cowher started telling someone else… “I just asked Silverback what went wrong.  He said, ‘Shit happens.’”

While his teammates more often referred to him as “Deebo,” (a badass character from the movie “Friday,”) the rest of Pittsburgh adopted the use of the nickname.  In fact, it’s on my favorite t-shirt that I never wear.

I wore it in tribute yesterday though, on a trip out to the store.  Obviously, I had to wear it under a sweatshirt… I'm not entirely without class... 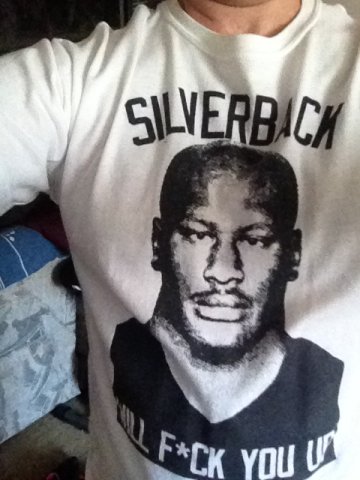 James Harrison could have played football in any era.  He would have fit like a glove onto the Steelers teams of the 70s.  In fact, he would have been even more dominating, because the league was not yet overrun by 300 pound linemen.  Could you imagine this guy playing in an era where you could still beat the ever-loving shit out of your opponent?  Scary…

But for all Harrison’s general badassery, (and there have been a couple of knuckle-headed mishaps), he was actually a pretty good guy to his fans.  He was a regular presence on Twitter, often giving away autographs and memorabilia.  In fact, he was the first one to announce his release and he did it via a Tweet.

I took the opportunity to bid him farewell, and also ask a favor.

@jharrison9292 Good luck, James. You'll always be one of my favorites.Oh, and please sign with an NFC team!
— bluzdude (@DarwinfishBluz) March 9, 2013

The last thing I want to see is this guy screaming around the end, coming at Ben Roethlisberger’s blind side, so I sure hope he doesn’t sign in the AFC, and definitely not within the division.  I fear that the Brownies make pick him up, because A) they frequently sign AFC North cast-offs, and B) Harrison is from Akron, which is about an hour away.

And if football doesn’t work out, I bet Harrison could get a job as a hockey “enforcer.”  Jesus, could you see this guy on the ice?  If he signed with the Pens, they’d have to have a standing order down at Pittsburgh Plate Glass, to replace all the glass panes he would smash out.  I see him as a more lethal version of (Pens old enforcer) Georges Laraque.  In fact, I tweeted as much last night.

James Harrison would be the best hockey enforcer ever. Like G. Laroque, only w/out the politeness. "Wanna go? [POW]"
— bluzdude (@DarwinfishBluz) March 10, 2013

(Laraque was known for his very formal invitations to fight.  “Excuse me, would you like a fight?  Yes?  OK, good luck.”)

So it is with a heavy heart that I say goodbye to a classic Steeler.  Often times, I’ll re-number a jersey after the player leaves the team, but not this one.  #92 will live on, in my jersey closet, if not on my team.

And please, James… sign with the Rams or the Bears… And for Pete’s sake, stay away from the Ratbirds!
Posted by bluzdude at 2:00 PM

We should dress zombies up in football gear, and throw random ones onto the field during games... Keep them on their toes and all.

You'd definitely need them in the full face mask.

For GODS sake anyone but the RATBIRDS James !!!!!!!

That first picture is amazing. Sometimes what goes up on YouTube terrifies me (the woman taking a crap in the car wash?), but sometimes being able to see what you're not supposed to see is the best. Do you know if he got into any trouble for that, though? Seems like you can't just go around body-slamming people, even dumb ones.

Harrison would cost them about as much as Boldin would, who they just salary-dumped. So I don’t think he’s coming here. I still think Cleveland…

I love that picture. It really shows how the guy got yanked up and thrown down so hard his feet when up over his head.

No, he did not get in the least bit of trouble for that. And he became a folk hero instantly.

But now, in the new more sensitive, “safety conscious” NFL, it wouldn’t surprise me if a player got fined for blasting a fan on the field.

Speaking of, I think that fan went into rehab after that. (After he got out of Central Holding.) Dude figured he’d better sober up, or at least become a fan of a better team.