Time to clean out the litter box that is my mind.

Cafeteria Comedy Hour
Friday is Pizza Day at my company’s cafeteria, where you can order a personal pizza with anything on it, for one (very good) price.  It’s the lunchtime highlight of my week.

When I went for lunch last Friday, I found my boss’s boss down there waiting for her pizza.  It was a good chance for me to get a little informal face time with someone who’s pretty high up on our food chain.  As we were chatting, it became my turn to order, and I stepped up to the counter.  There was a new ingredient among the selections, so I asked the chef what it was.

Immediately, I foresaw the possibilities here, and engineered the following exchange:

Bluz: Hmm.  And I assume that’s chicken right there?

Bluz.  Those sound very good for me.  [pause]  I’ll have pepperoni, bacon, ham…

Bluz, for the win.  I totally set the whole thing up and it worked perfectly.  Although there may be a downside to the Boss thinking I’m about one prime rib away from a massive heart attack.

Corporate Health
Our company is always pushing all these “health initiatives” at us and it drives me nuts.  If I wanted to be nagged about my health, I’d stay home all day and listen to Pinky.  (Someone has to look out for me.)

This week, they sent out this chart that shows the calorie counts of some common food items, and how long you would have to walk or jog to burn it off.  Suffice to say, I’m in serious trouble.

I tell you, after one of my lunches, by the time I get done walking, I’ll be 7 miles away.

I don’t have the time or patience for that much walking, especially when the weather is only habitable outside for a couple months a year.  Why don’t they provide some realistic exercise alternatives?  Like, what I want to know is, how long will it take to burn off my lunch via bobbling my leg up and down at my desk?  I can do that all day long.  Sure my cube-mates think it’s a prolonged earth tremor, but I have my health to think about…

How many calories does tossing my Koosh Ball up to the ceiling burn off?  I like to try to see how close to the ceiling tiles I can get it without hitting.  I used to try to get it inside the grill of the light covers, without touching the bulb, but decided it would be too hard to explain how I smashed the fluorescent light bulb all over me and my desk.  Still, it really works the triceps.

Bahrain is Play’in Again
I got word from a reader from Bahrain (which was confirmed by my StatCounter, if not the country listing at the bottom of the blog), that he has been able to access my site.  So maybe I’m no longer banned!  Or, maybe I was just banned by Bahrainian Facebook, which was how my prior reader knew I was banned.

Anyway, that meant I had to make some changes to my header picture, which you might have noticed.  It’s kind of sad… I liked thinking I was subversive enough to require banishment from an entire country.  However I’m comforted that any twisted malcontents that find themselves living there now have an outlet to a twisted malcontent of the outside world.  I do what I can.

Spamalittle
As you may recall, I blogged earlier this month about my problems with Spam Comments, and how it’s taking more and more of my time to keep them off this site.

You’ll be happy to learn that the figurative coconut of an obvious solution finally fell out of the tree and conked me in the melon.  Now whenever I receive the email notifying me of a possible bullshit comment promoting some bullshit link, not only do I track back to the post to delete the comment, but I also turn off comment capability for that post.

Since they’re almost always posts that are a more than a year old, the net effect to you should be zero.  I get practically no legitimate comments on old posts, save for my “Hives” post.  You can see the effects of this action by noting the Top 5 Posts section, and how that they now mostly consist of newer posts, instead of ones that are years old.

And by only turning off the comments on a case-by-case basis, I don’t have to wade through an enormous backlog of over 650 posts.  I can just do the ones the spammers are hitting on.

So, it only took me a couple of months of suffering to hit upon the painfully obvious solution that had been staring me in the face the entire time.

Maybe I should have had fish on my pizza.  I can obviously use more brain food.

It’s Wahoo Time Again
Pinky and I are heading to Florida in early May, to go visit my folks.  As I wrote during my last trip there, their local AA baseball team is called the Pensacola Blue Wahoos.  We had a chance, back then, to wander around their brand new ballbark.  Unfortunately, tickets for the season were already sold out.

This year, I planned ahead and bought tickets online to see the Blue Wahoos play the Montgomery Biscuits.

I’ll let that sink in.  Montgomery, Alabama has a team called the Biscuits.  It makes me wonder if the team is bankrolled by Pillsbury.  Maybe they play in Pop’n Fresh Park.

The best part is the logo.  Get a load of this:

This is “Monty,” the Biscuit.

Apparently, this is the logo for their alternate “away” cap. 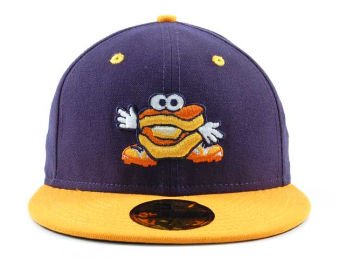 Is that not the wildest ball cap ever?  I must have one.  If I didn't already have a Blue Wahoos cap, I’d probably buy this one and wear it to the game.

The Biscuits also have a cool “home” cap, with the same character. 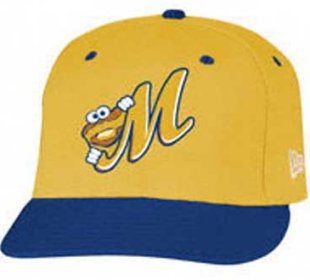 This one’s a little too “bright” for me, plus it’s too close to University of Michigan colors.  I think I prefer the Full Monty.

But you have to love the inventiveness of minor league teams.  I wonder if any other teams will bite on the food theme… The Chicago Pizza?  The Panama City Pepperoni?  The Macon Bacon?  The Parma Pierogi?  The Sausalito Sausages?  I can just see the come-on for that one…

“Come to Sausalito, where every game is a Sausage Party!”
Posted by bluzdude at 12:39 PM