I don’t usually follow news about the lives of pop stars very closely (or at all), but this new dustup with America’s Sweetheart, Taylor Swift, got my attention when my not-so-secret crush Tina Fey got caught up in it.

I’ve never had a strong opinion about Taylor Swift, beyond her having good hair and the most chewable lower lip in show business.  I wouldn’t give ten cents for her songs though… not because they’re necessarily bad; they’re just not my style.

I saw a bit about her on 60 Minutes a while back, and thought she seemed pretty grounded, considering her having such a high profile at such a young age.

An upcoming feature on her in Vanity Fair quotes her as being upset at Tina Fey and Amy Poehler for dissing her during their Golden Globes hosting gig.  She’s quoted as saying: “You know, Katie Couric is one of my favorite people because she said to me she had heard a quote that she loved, that said, ‘There’s a special place in hell for women who don’t help other women.’” 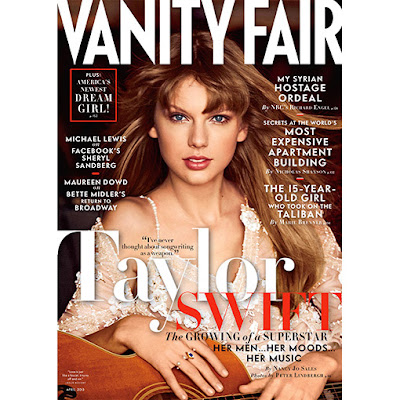 As a refresher, the joke that offended was Tina Fey’s quip from the podium that Swift should “Stay away from Michael J. Fox’s son,” and that she could “use some ‘me’ time to learn about herself.”

So the story started getting interesting when Amy Poehler was quoted as replying, “Aw, I feel bad if she was upset. I am a feminist, and she is a young and talented girl. That being said, I do agree I am going to hell. But for other reasons. Mostly boring tax stuff.”

Between that and her Best Buy commercial, I really ought to start watching “Parks and Recreation.”

The exquisite Ms. Fey weighted in shortly after: “If anyone was going to get mad at us, I thought it would be James Cameron. I did not see that one coming. It was a joke. It was a lighthearted joke.”  She went on to compare the quip to a couple of old aunties teasing her over Thanksgiving dinner. 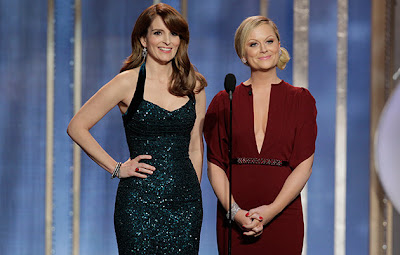 These two can come over for stuffing any time.

I’m sure it must be tough to be so young and have all of the world’s attention on your dating habits.  But you know what?  When you air your dirty laundry in public (like she does through her songs about all her famous ex-boyfriends), you’re going to have to expect a little blow-back.  The comment she’s fussing about was pretty innocuous.  She’d have been much better off to have laughed it off, or even better, come back with something better.

Wait, what am I saying?  No, you never get into a war of words with a couple of premier improvisational comedians.  Maybe she should have just said, “Tina Fey ought to be thankful she didn’t have any sons herself, because I’d be waiting for them.”

That would have defused the situation and let people know she was in on the joke, and the “story” would have disappeared.  Perhaps she should watch a celebrity roast or two, and thank her lucky stars that she never got that kind of treatment.

I do wonder about her though.  On the surface, she seems like a total dude magnet.  If I was 22, I’d probably be camped outside her house.  So it makes me wonder why she has such rotten luck with guys.  Could she really have gone out with 5 or 6 shit-heels in a row?  What are the odds?

See, I have to look for the common denominator… which is her.  It makes me wonder what goes on outside of the spotlight.  Does she act like a spoiled princess?  Does she demand constant attention?  Does she smell like old cheese or squeeze the toothpaste from the middle of the tube?

OR, maybe it’s not her as much as it is her dating criteria.  You know, if you date a bunch of young actors, pop singers and trust fund babies, who are used to sticking their noses out their front doors in the morning and watching a buffet of the night’s poon fall out of the trees, you might be asking for trouble in the relationship department.

How about dating a “nobody?”  Does her record producer have a son?  How about her sound engineer, or tour bus driver, or t-shirt vendor?  Throw a bone to the quiet “nobody,” Taylor, and he’ll be yours forever.

Chelsea Handler weighed in on the whole controversy today.  She said, “My theory about Taylor Swift is that she's a virgin, that everyone breaks up with her because they date her for two weeks and she's like, ‘I'm not gonna do it.’ And they're like, ‘Oh, well, forget it. Then I don't want to date you.' Every guy thinks they're going to devirginize her and they're not.”

If Handler is right, that’s another reason for her to date a “nobody.”  Her old “boyfriends” are probably used to doing things with girls that you wouldn’t do to a farm animal.  They’re not going to wait around on the hot monkey lovin; they’ve got wild oats to sow.  They’ve probably left more DNA in hotel rooms than 10 seasons of CSI.

But a “nobody” will wait forever for a shot at hitting that.  Or worst case scenario, she never gives him any?  He’s already raised his profile in the dating world, and can move up a couple levels of dating hotness.

There’s your answer, Ms. Swift.  Find a nice guy that’s not famous.  Treat him right and he’ll be yours forever.  Of course that means you won’t get to write any more “He Done Me Wrong” songs, so sales might suffer.  But that’s OK, right?

Director’s DVD Commentary: It’s distinctly possible that I’m full of shit here, about whether a “nobody” would hang around longer.  I base my opinion solely on the fact that in 1988, I would have quit my job and followed Joan Jett around the country, if she asked, just for the chance to wipe the sweat off her guitar.  Just sayin…
Posted by bluzdude at 6:02 PM