This weekend, my buddy Rik’s younger brother found some old pictures and posted them on Facebook.  When I saw them, I almost couldn't breathe.  It was a shot of me and my four best buddies, goofing around in front of Rik’s house, back in the summer of 1979.

There were 3 shots in total.  Two of them showed us in, shall I say, “less than dignified” poses, so this is the other one. 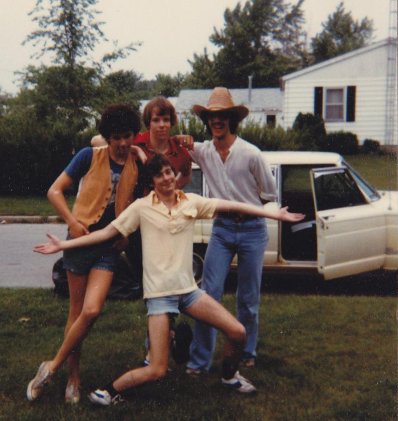 L-R: Billy G, John, me, with Brill in the Star Pose in front.  Special guest star: Jaundice, my family’s Jeep Wagoneer, which squired us about on our various adventures.  Rik must have ducked out of this shot, probably to chase after some babe walking down the street.)

Anyway, the thing that shook me up was that I have absolutely no recollection of this event.  It was like I woke up in the middle of “Hangover 3.”  I don’t know where we were going or what we had been doing.  I can only be sure of the timeline because 1979 was the only summer that A) we all hung out together and B) we were still that skinny.  By September of that year, Bill’s family moved out of state, so it was a pretty big deal when we got together.

Rik thinks we just finished dinner at my house, and my dad got us all liquored up on gin and tonics.  That would explain my memory loss.  Maybe it was graduation night, because I don’t know why else we’d be posing for a series of pictures for Rik’s mom.   While I might not remember what I had for lunch on Monday, I thought I remembered all of our youthful exploits.  It makes me wonder what else I’m missing.

Director's DVD Commentary: I just referred to some other pictures from graduation afternoon, and Brill and Bill are wearing the same shirts, and I have the same hat.  Date confirmed!

One thing I most definitely remember is how good it felt to have such a close group of friends.  Don’t we look like we’re having fun?  When I look at the 3 shots as a set, all I can think is, “These guys are tight.”  And we were… for a bunch of knuckleheads.

It still hurts, seeing Brill there.  He passed in January of 2001 and I think of him all the time.  But it’s good to see him clowning around and full of life.

I wrote a bit about our group dynamic before in my early Barn posts.  We were a group that never should have worked.  I was a quiet kid in honors classes, who told bad jokes and made horrible puns.  Brill was quiet, sly, and ever easy-going.  Rik and John were hellions, who liked to drink, fight and chase girls.  Billy was the last piece of the puzzle, a real wise-guy with peerless comic timing, a sense for pranks and adventure.  He could get us to do anything, no matter how ridiculous.  There was something about the combination of these 5 personalities that clicked, knitting us together like the five fingers of a fist.

Bill came up with things to do, whether it was some stupid stunt, or just sitting around shooting the shit, with a tape recorder rolling.  Rik and John were the motors that drove our partying.  I was a very inexperienced drinker, so I took my training from them.  (I took to it pretty well, no?)  But I also made sure we didn’t do anything too outrageous (or illegal) so we mostly stayed out of trouble.  Brill?  Well, Brill was just Brill.  He went along with just about anything we wanted to do, and did it with surprisingly pointed humor.

If I could ever return to a specific time, I’d go back to the summer of 1979 and enjoy that post-high school, pre-college slice of footloose and fancy-free.  But I remember it being such a kick in the gut when we heard that Bill’s family was moving to Georgia in the fall.  It seemed most unfair… he’d only joined our group near the end of the school year, so we hadn’t even had a full year together.

That September, we had our first official Barn Party, for Billy’s send-off.  Early in the festivities, we posed for our formal portrait.  I came to think of it as our We Five pose. 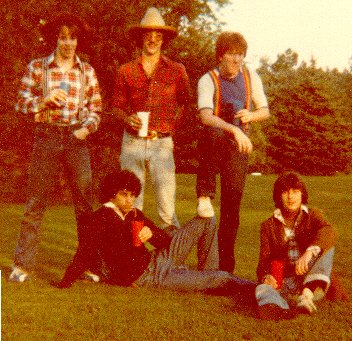 We didn’t really have any rhyme or reason, we just threw it together and got it snapped.

It was at least 5 or 6 years before we were all together again.  Bill had come back to visit a couple of times, and some of us visited him, but there was always someone missing.  With Bill in Georgia, Rik in the Navy, and John married with children, getting everyone together was complicated.  I don’t remember what the occasion was, but there we were, back together again for a Barn party in 1985, when we decided to do the same pose. 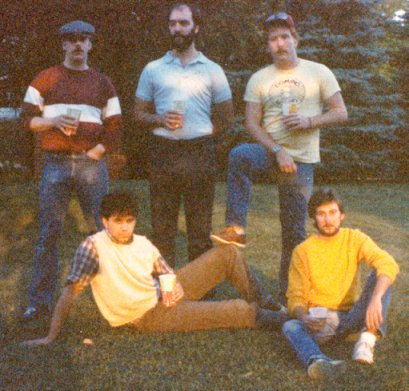 Already you can see that we were no longer the stick figures of our youth, and my hair was in full retreat.  Rik’s sporting his Navy ‘stache, and I had contacts and a beard.  John looks like a grownup though.

Time marched on, as it is wont to do.  We could gather four of us together from time to time, usually if I went back to Ohio.  But Billy was out in Oregon, I was in Cleveland or Albany, and all of us were out living our lives.  We were not able to get everyone together again until 1993, when I got married.

One of my primary goals of the night was to make sure I got the wedding photographer to take the We Five shot.  I’m sure you’ll agree; we cleaned up pretty well.  I felt bad that Bill and Brill had to sit on the ground in their nice pants.  I’m in my special Wedding Hat.  (I wore it to Brill’s wedding too, a few years later.)  I love that hat.  I need to go to more fancy occasions. 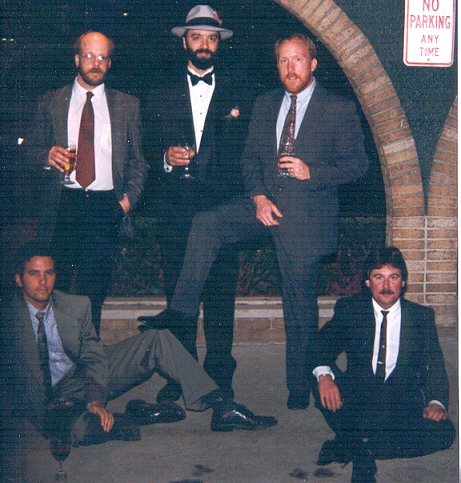 That’s us in our early 30s, in our so-called “primes.”  I have this one framed.  I really have to re-scan that one with a better scanner.

The last time we got together was for our 20th high school reunion in 1999.  It was absolutely thrilling for me to walk into that hotel ballroom with my 4 best friends, the same way we’d walked out of our graduation hall.  To me, it was a statement: “Yes, fuckers, we’re still tight.”

People actually commented to me, “I can’t believe you guys are still friends!”  I was like, “Why wouldn’t we be?  We chose our friends wisely.”

The next day, we got together at Rik’s country estate and took the last We Five shot. 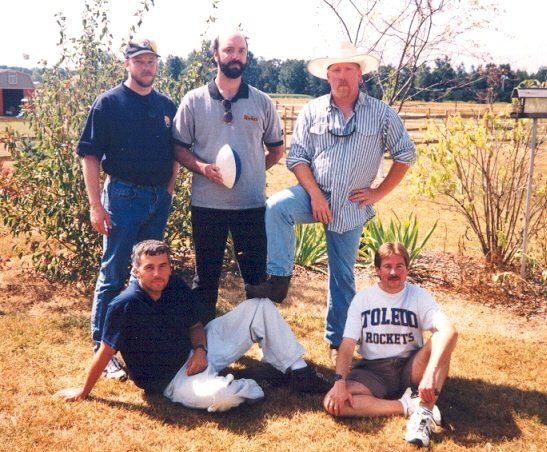 I call this the Older, Balder and Fatter edition.  Except for Billy… he was rockin’ a nice, graying George Clooney cut, which was a distinct trade up from the Arnold Horshack Mop he used to have.

And that was it.  Two years later, Brill left us for good.  I figured we’d retire The Pose.  The only way I’d even consider doing it again is if somehow, we could get Brill’s son to take his place.  It worked for Led Zepplin, when they had Bonzo’s son sit in on drums at Live Aid.  The problem is that we’re still all over the country and are unlikely to ever all be in the same place again.

But that’s OK because we still have the memories.  At least until the next mysterious picture shows up…
Posted by bluzdude at 6:29 PM

Email ThisBlogThis!Share to TwitterShare to FacebookShare to Pinterest
Labels: Bluz LIfe, Picture This, Stories and Misadventures, The Barn

These pictures are great!! I love the different editions!! Perfect!

Yeah, it's weird watching yourself get gradually older. It's almost like a flip book.

I love the pics through the years. I had a crew like that in high school but we've never gotten back together. We're spread out across the nation. Thought I see some of them at the 30th high school reunion but they were all no shows. No pics. Just memories.

Those pictures are great!

Oh, man, this POST almost makes me unable to breathe. It's so nostalgic I kind of want to cry. One of you is DEAD! My friends are getting older, too! I can't handle it! Thinking about your car's name makes me feel better, though.

Too bad about your buds missing your 30th. I missed mine too, but I already caught up with everyone I wanted to, at the 20th. And I see most of my buddies every year. (Billy’s been a ghost lately. Haven’t seen him since his wedding in 2005.)

Thanks! Not bad for a bunch of goofy looking mugs.

I had a classmate with an identical Jeep, but his was green so he named it “Algae.” Naming ours “Jaundice” seemed to be the appropriate response. Even my parents called it that. (And we always named our cars.)

Don’t feel too badly though. Our friend lived 30 years on “borrowed time.” He was never expected to live past the age of 5. He should have been gone before I even met him. But it does make you want to make sure your friends and family know how much they mean to you.

Pinky saw what I was posting and went, “Living in the past again? Your favorite place to be?”

"Those wre the days, My Friend...". We know they have to end but what sweet memories. and they all remember macaroni and cheese on Friday eve.

Those cinnamon rolls were the only thing that could lure me out of bed, the morning after a party. It sure wasn’t to look at all the human wreckage huddled around the kitchen table…

I occasionally stumble across an old photo from jr. high or high school that I have no recollection of and it's disorienting to say the least. Love the collection of photos with your buds over the years.

I guess that one just struck me because I'd never seen it before. And because of that, I completely forgot about that night. I still wonder what we were up to that night.