When I was in 6th through 9th grades, we lived in a tidy little subdivision in Columbus, Ohio.  It was one of those developments where every other house was the same.  You know; ranch, split-level, ranch, split-level, etc.  The cool thing was that my best friend in the neighborhood lived 2-doors down, so whenever I was at his house, I felt pretty comfortable.  I just had to be careful of which bedroom I went into, because ours rooms didn't correspond.

The back yards were all divided up with 4-foot chain link fences, which made for a very specific division of property.  And you would think that they would put a crimp in our fun and games, but that wasn't really so.  We just incorporated them into whatever we were doing.

Our next-door neighbor had a baseball diamond worn into their backyard.  And it wasn’t from us… it was like that when we moved in.  We thought it was really cool, and spent many a summer day playing wiffleball over there.  It didn't even matter how many kids were there; if there was more than one, we could figure out how to play.

We’d use “ghost runners” to run the bases, and they would advance depending on what the batter did.  Obviously any ball caught out of the air was an out, and if you fielded a grounder, you threw it at the runner and if you could hit him, they were out.  I so wish the major leagues would adopt that rule.

We played football over there a lot too, but it came with a price.  See, these neighbors had this horrible old bulldog, named Babe.  She was ancient, with nothing but stubble for fur.  In fact, her hind end was all hairless and leathery, like an old volleyball.  Anyway, because of Babe, we had to be careful where we were tackled, or else we might end up face down in a Babe bomb.  Worse still, sometimes the dog would eat crayons she’d find on the floor, which made her shit in Technicolor.  Now that was a real treat to find… 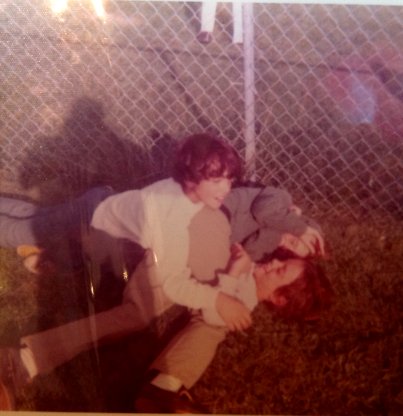 A bunch of us in a football pileup, thankful we missed landing in all the dog turds.

We used to spend our summer evenings playing giant games of Hide-n-Seek, Kick-the-Can, or Ghost in the Graveyard.  We’d use three houses in a row on one side of the street, including backyards, and maybe a front yard or two on the other side of the street.  As my friend and I got older, we got better and better at getting over the backyard fences.  Usually, we’d just plant our hands on the top rail and vault ourselves over.  Once my buddy started running track, he began hurtling the fence without hands at all.  I was never quite so bold (or fast).

Needless to say, when running around at dusk or after dark, the fences could be formidable.  I remember being out front, with everyone hiding, and hearing a commotion kick up in the back yards, meaning a chase was on.  Then suddenly, a loud KA-WANNNG!  That was the unmistakable sound of my buddy misjudging where the fence was during a hurdle.

I had two favorite hiding spots… one was right out on a hill in the neighbor’s front yard, out in plain sight, but in a deep shadow due to the floodlight nearby.  You could see everything out in the street, but no one could see you until they were right on top of you.

My other spot was up the tree in our front yard.  I had climbed up to “my spot” so many times, I could do it in about 10 seconds, plus, I could literally do it with my eyes closed.  I could spend a half hour up there, laying back against a fork in a branch about 15 feet in the air, and there was zero chance of the seeker finding me.  Then as soon as he’d go around a corner, or into the back, I’d drop down and come in home free.  Oh, to be that bendy and agile again… I swear; teenage boys are part monkey.

There was one fence in the neighborhood that everyone agreed really needed to be there.  In fact, we might have wished it were about 15 feet taller.  It ran behind our house and the neighbor’s.  This was the fence that contained “Rip.”

Rip was a dog that belonged to the neighbor behind us.  I don’t know if he was named Rip because that’s what he’d do to any trespassers in his yard, or because of how said trespasser would Rest in Peace after Rip got done with him.

He was a sturdy dog; part husky and part German shepherd.  He had coloring like a shepherd, but was stockier, with thicker fur.  Shortly after we moved in, my dad began taking him out our ham and beef bones.  He’d go over to the fence, let Rip smell his hand, and then toss the bones over.  Dad always said, “If he ever gets over that fence, I want him to remember that I was the guy that gave him the bones.”

Rip would catch them in the air and just KER-RUNCH them to bits.  There was no gnawing.  He’d eat those things like they were Scooby Snacks.

I don’t know if that was just how he rolled, or if he was putting on a show for us.  He probably told his dog friends; “You should see the looks on these guys’ faces when I smash those ham bones…  The dudes get whiter than Milk Bones.”

On second thought, I don’t think Rip had any dog friends, judging from how he and Babe went after each other.  Whenever they were both outside and would see each other, they’d race back and forth along the barrier fence, noses about 2 inches from each others, and bark their heads off.  Rip would be like “WOE WOE WOE WOE….”  And Babe would be like, “RABA RABA RABA RABA…”  Then one of them would just trot off like, “OK, that’s enough for now.  I guess I told THAT asshole…”

It was funny to watch, because Babe only came up about halfway up Rip’s leg.  The old girl didn’t take any crap from him though…

Eventually, Ed and I took over the job of bringing the bones out to Rip.  Hell, if Rip got loose, the odds were higher that one of US would be out there, rather than Dad.  By feeding him, I learned that Rip was a pretty good dog.  He’d trot up to us and walk back and forth, pushing on the fence, like a bear scratches his back on a tree.  I’d reach over and pet him, making sure to let him smell my hand, before giving him his treats.  I used to pet him all the time.

I always wondered if he’d really bite me if we came face to face.  I didn't think so, but didn't care to sacrifice the skin on my ass in case I was wrong.  I think he liked us just fine, as long as we were on OUR side of the fence and not his.

This became a problem when we played wiffleball.  Sometimes we’d foul one off and the ball would go into Rip’s yard.  Oh, man, my stomach would just sink.  But a lot depended on where in the yard it went.  See, there was a garage just on the other side of the ball diamond yard, with about 4 feet between it and the fence.  Rip had a trail worn, along the yard side of the garage, and then back along the fence.  If he was outside and heard any noise on the fence, he’d come tearing along that trail, looking to come git some. 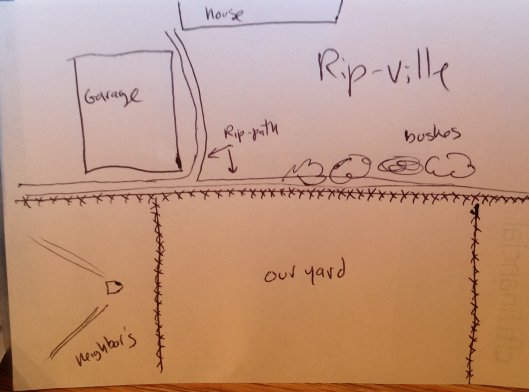 Here's the layout I'm talking about.

So if the ball landed behind the garage, we were nimble enough to get over the fence and back before Rip could come around the garage.  It was more problematic when the ball went past the garage and further into the yard.  Then we’d have to do a little recon, and decide, A) if Rip was outside, and B) in the grand scheme of things, was that ball really worth it?

Director’s DVD Commentary: Yes, I know, this is totally like the movie “Sandlot.”

One time we sent our chubby friend over to retrieve a ball.  (The rule was whoever hit it over had to go get it.)  He got the ball fine, but panicked when he heard Rip coming, and caught his sneaker on a barb at the bottom of the fence.  Do you remember the scene in “Jaws” when the shark attacks the diver cage?  That’s what it looked like as our friend tried to scramble over the fence, with Rip thrashing about at his feet.  Rip never actually bit him, but he was barking and snapping like crazy, and plum scared the living shit out of the kid.  He swore the dog bit his foot, but I’m pretty sure the hole in the canvas over his toes came from the fence barb.  Rip could have bitten his toes clean off, if he wanted.

Another time, we saw a couple of teenage boys cutting through our back yard.  We were like, “Oh, this is gonna be good…” They got about halfway into Rip’s yard when he came running.  He scattered those kids like bowling pins, as they practically swan-dived back over the fence.  Rip was like, “Punks… this is MY house.”

We grew to especially appreciate that fence, once we moved out to the country.  Beside our house was an empty field, and beside that, a family with a giant Great Dane mix.  Fucker was massive, with a huge bark... “BOAF!”  My brother grew fond of imitating the dog’s bark, until one day he decided to try it out on the actual dog.

Ed stood at the edge of our property and hollered, “BOAF!!”

Ed didn't stick around for the rest… Gone… He was back to the back door in a flash.

Out there, there wasn't anything to stop a giant dog from running over and taking a chunk out of his skinny shanks.
Posted by bluzdude at 6:42 PM

At first I thought your title said "Dogs and Feces". Oddly enough, I could relate to both your actual post, and the post in my mind. Well played.

It's funny how that works out sometimes.

EXACTLY! And usually, you and John were the Big Dogs.

Pre-dates it, too. We definitely looked at Rip the same way the kids did in The Sandlot.