Get Me Out of This Month

I don’t know about you, but April has been absolutely brutal to me.  In fact, ever since the Ratbirds won the Super Bowl, it’s like everything I've touched has turned to shit.  It’s probably the manifestation of all the negative energy I've put out towards the Ratties, coming back home to roost.

I've already written about a bunch of the things that have gone wrong… I mean, kidney stones… hello?  And then going into A-fib right afterwards?  And coming down with a cold right after that?  I was lucky it was just ending last Friday before we headed for our Pittsburgh weekend.

And all the sports tickets I dropped a ton of cash on earlier this year?  So far, for the first three games that have occurred, I've only been able to use 3 of the 6 tickets.  I’m hemorrhaging money like the Iraqi government, right now. 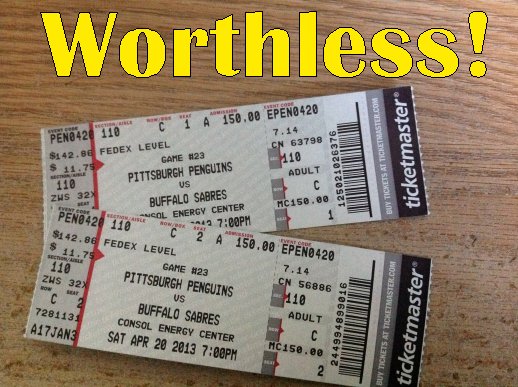 I mean, think about it… When I ordered my Pens tickets, there were 48 games on the schedule, 24 of which were home games.  I could have picked any game to attend, but the one I did pick was the 1st game in ages… and I can’t remember anything like this happening EVER before… to be moved.  What are the odds?  And then not to be able to find anyone to take the seats, in a hockey-crazed town like Pittsburgh?  Unreal!

And then there are the things you don’t know about, like my latest apparel purchase snafus.  I already mentioned being under-whelmed by my Manny Machado jersey, because it didn't come with front numbers and the lettering wasn't properly stitched.

Around the same time I ordered that, I also ordered a Penguins polo shirt… a men’s, white, size-XL.  What they shipped to me was a women’s, black, size-S Blackhawks jersey, which is just about as opposite from my actual order as you can get.  I know I ordered correctly, because my email confirmation lists it properly.  But the invoice and the shirt were dead wrong.

So sure, I returned it, but I naturally had to pay postage.  AND, guess what day it was when I took my lunch hour to nip over to the post office?  April 15th, that’s what.  Do you know what else is going on at the post office on April 15th?  A hillion-jillion-quintillion people are lined up to mail their deadline-day tax returns, that’s what.  I could feel my shirt turning to shit right there in the box.  Sure, I mailed it the next day, but not without that big runaround, first.

I also ordered a new Orioles jersey this spring.  I wanted an actual “white” replacement for my “cream” colored Nick Markakis jersey.  I found one on E-Bay and won the auction with a bid of $36.00.  I made the Pay-Pal payment immediately, to facilitate receiving the jersey by opening day.  Unfortunately, the seller was a first time E-Bay user and didn't have a clue what he was doing.

First, he told me someone else won.  I told him that E-Bay told me I won, and I already paid for the jersey.  (All communication was via E-Bay’s internal email system.)  He said that he didn’t think he had the money yet, but wasn’t sure how to find out if he did.

I told him to check his Pay-Pal account, and said that I confirmed with my bank that the money had already been taken from my account.  Eventually he said he found the money and would ship my jersey.  It had taken about a week to get to that point.

The middle of the next week, I checked back to see if he’d shipped yet.  He said he hadn’t, and due to the snow (in the northeast) he wouldn't be able to until the weekend.  When I checked that weekend, he said he mailed it on the Friday.

When the following Friday came and I didn't have the jersey, I contacted him and asked for the tracking number.  He said his sister had mailed it, and didn't get a tracking number.  We confirmed my address and he asked that I give it another week for the jersey to show up.

All along, I was wondering if this guy was a con artist, or just incompetent.  But I stayed calm and measured, so that I could present the chain of emails to E-Bay, should I need to make a case to get some consideration.

When the jersey still hadn't arrived (after a full month of back and forth), I told him I’d been patient long enough and I’d had about all I could take of this mess.  He offered to refund my money, and I took it.  Naturally, I didn't get ALL of my money back.  E-Bay took a $7 cut of the original sale, and then another $1.50 of the refund transaction.  But at least I got most of it back.

So April can’t end soon enough for me.  But I’m worried about May too, though.  We’re heading for Florida on May 2nd, and I’m hearing about all these flight delays due to air traffic controller furloughs.  If we get stuck in Atlanta, I’ll understand that it’s nature’s way of extracting the Ratbirds’ revenge.  Bitch…

I guess I could have it worse.  It’s not like I worked for NASA and accidentally drew a schlong on Mars. 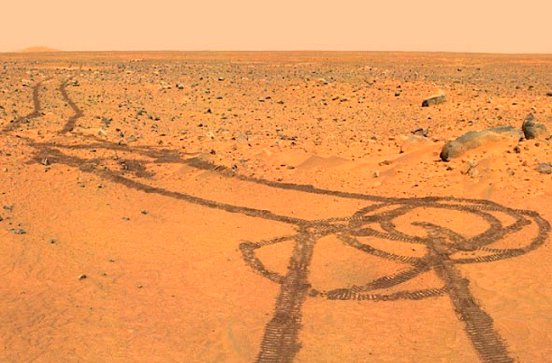 But if the Penguins wash out of the playoffs in the first round again, I’ll know I’ll need to buckle up, because it’s going to be a bumpy ride this year.
Posted by bluzdude at 6:36 PM

Email ThisBlogThis!Share to TwitterShare to FacebookShare to Pinterest
Labels: Baltimore Orioles, Bluz LIfe, Bullshit, Morons on Parade, The Burgh, Things That Piss Me Off

The schlong on Mars was the only good thing to happen to me this month. Come on, May!

I can feel it. May is gonna be your turn-around month. It certainly can't get much worse, can it?

Well, it's obvious what the problem is. You have angered the Ravens gods by always referring to them as "ratbirds" and they have chosen now to seek their vengeance! Beware an angry bird!!

I think you need to mea culpa yourself into their good graces. First, beg for forgiveness. Second, promise to stop calling them ratbirds. And third, root for them against every team BUT the Steelers. I mean, really, you are pretty much a Balmoron now. It's the least you can do.

You may also need to sacrife a chicken, but we'll hold off on that for now.

Once all those tasks are complete, I'm sure your life will perk right up. If you DON'T do all of those things . . . woe befall you!!

Nope, not much worse, without having been in Boston last week. In that respect, I suppose I got off light. See, I’m still trying to go with the “glass half full” thing. Tough though… it’s not in my nature to be optimistic.

Gee, that’s all I have to do? I think I’d rather go another couple rounds with the kidney stone… Hey, does eating at KFC count as sacrificing a chicken?

And even though I’m an Orioles fan, I can’t be a Baltimoron, because I still use my turn signal.

Ah'mo come git me some!

You should quit while you're ahead and just go live in a bomb shelter.

With all your hats, of course.

OH! I know! Go live in the pit that Kelly's making for Letang. That would be amazing.

Good idea... wake me up on Wednesday, the first day of May. I'll poke my head out of the shelter, like Punxatawney Phil, and sniff around for the next atrocity. If the coast is clear, life continues...