When we last left Our Hero, he had just been discharged from the hospital, following an attack of kidney stones.  The stone remained lodged in his bladder and he was to pass it on his own.

The hospital discharged me Thursday afternoon, and armed me with a couple of prescriptions: Cypro for the urinary tract infection that the stone scraping caused, and Percocet for pain relief when I start passing the stone.  We filled both scrips on the way home.

Once home, I went about the business of trying to get this thing out of me, by drinking lots of water and carefully examining my pee.

You know, I should probably apologize for all the pee talk in these last posts.  It’s just that it’s impossible to talk about kidney stones without getting into details that are usually omitted from polite conversation.  Of course, if you've been here before, you probably know that I tend to run light on “polite conversation.”  But I digress…

I figured it would be best if I worked from home on Friday, just in case anything moves.  Unfortunately, I was thwarted by tech problems, for which I spend a good part of the day on the phone with our tech support group in Bombay or where ever the hell they are now.  I probably should have just gone to work, because the stone stayed put.  At least I could have been productive.

Nothing happened on Saturday either, so I went ahead with my plans to go to the Orioles game on Sunday.  As I mentioned in an earlier post, I ordered my summer’s worth of sporting event tickets in January, which I now have on hand. 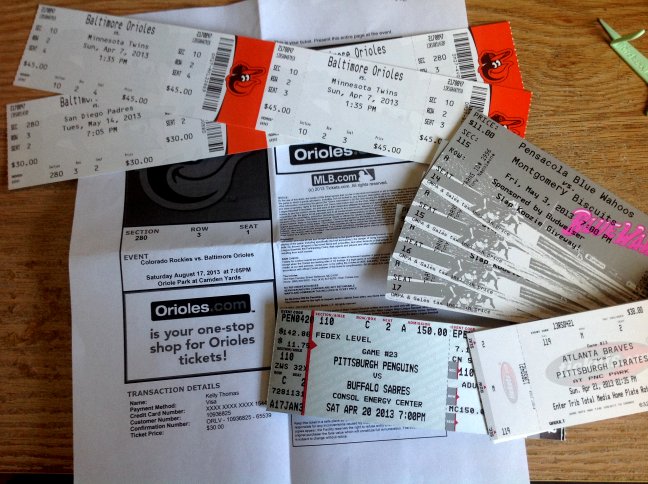 As you can see, I have tickets for Penguins and Pirate games for next weekend, Pensacola Blue Wahoos tickets for our May trip to see the parents in Florida, and 3 games worth of Orioles tickets.  It’s that pair at the top left that was giving me a problem.

See, I couldn't scare up a wingman for this game; all my usual playmates were otherwise occupied.  I figured I’d just sell the extra to those dudes that are always hustling tickets outside the ballpark.  Worst-case scenario, I sit on the ticket and enjoy the extra elbow room.  (Although at $45 a pop, plus Ticketmaster Gouging Fees, that would be some pretty expensive elbow room.)

Anyway, it was going to be a beautiful day for baseball, so I donned my new Manny Machado jersey and headed down to The Yard. 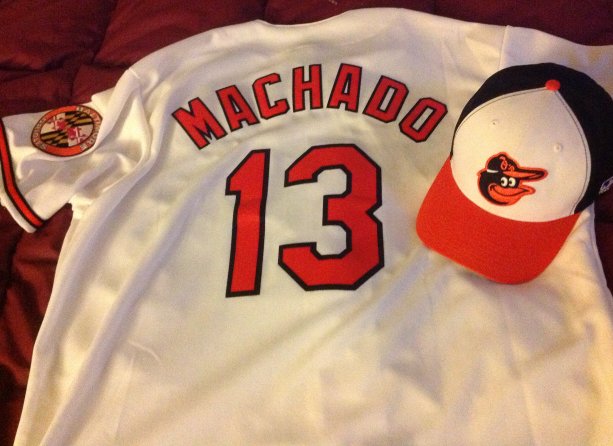 I wish this was one of those knockoffs, but I paid $100 for this “Official Replica,” and got something that was far inferior to the knockoffs.  I had to buy the shoulder patch separately and put it on, myself.  Plus, they omitted the front-of-the-jersey numbers.  PLUS, the inner stitching was drawn on, not sewn.  MLB had better get themselves some better sweatshops.

On the way to the bar area I frequent before Orioles games, I chatted up a number of ticket hustlers.  Seems my quest would be more difficult than I anticipated.  No one was interested in buying a single seat.  I was originally hoping to recoup $30 of my $45 ticket; now I realized I’d be lucky if I could get $20, if anything at all.

Eventually, I found a guy who was interested in a more detailed swap.  I offered to give him my pair, if he could get me a better single seat.  I knew that would be a tall order, because I liked my seat… 2nd row, down the right field line.  While he went to find a suitable single, I grabbed some food… Hello, Italian sausage.  I topped it off with a cheeseburger.  It’s OK… there are no rules at the ballpark.  That’s why you never see salad vendors outside a sporting event.

The ticket guy found me again and said he had a single… 7th row, he said, behind the Orioles dugout.  I figured it was farther back, but closer to the infield, so I was interested.  But then we had a difference of opinion… I thought we should trade ticket for ticket, and then he pays me $20 for the other.  He thought I should give him the pair AND $20.  I kyboshed that notion immediately.  My goal wasn't to upgrade my seat; it was to recoup a little dough off my extra ticket.  We eventually agreed to swap straight-up.  Hell, I was resigned to eating the ticket anyway.

I examined the ticket to make sure it was legit.  It looked like a season ticketholder’s ticket.  But I probably should have looked closer.  See if you can find the problem. 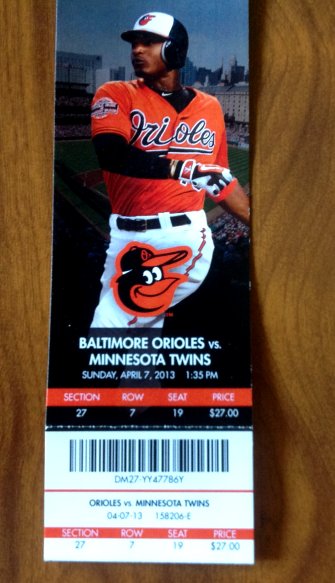 Yes, the ticket was real, but look at the price.  With my seat down in the outfield costing $45, there’s no way a 7th row infield seat should be $27.  That’s when it dawned on me… this was the 7th row of the second section, back under the middle deck.  I was probably a good 35 rows from the field.  Unfortunately, I didn't realize all of this until I was getting into the ballpark.  I confirmed it when I got to a seating chart.  Man, was I ever pissed.  I had the dude’s cell number, so I texted him a message, thanking him for fucking me.

Of course, I paid the same level of attention to that card as I did the ticket, because there were two names on the card and I texted the wrong one.  No wonder he didn't know who I was.  Oh well…

I decided I’d stake out my original seats, because maybe he wouldn't be able to unload them.  After all, the game wasn't sold out, so people might be more inclined to buy from the ticket office rather than some shady guy in front of the bars.  The seats were still open when the game started, so I went down and sat in one. 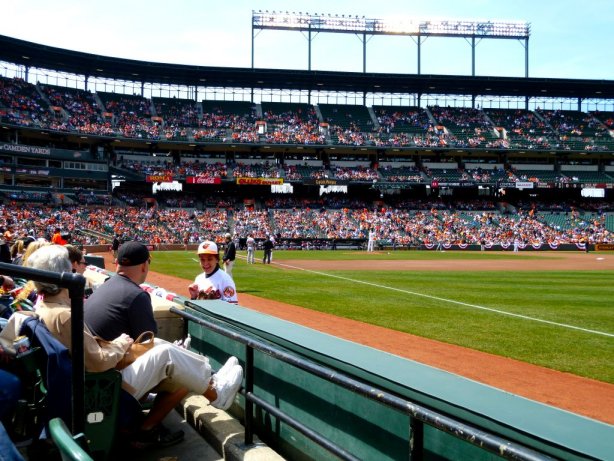 Nice view… so far, so good.

Sadly, my good luck only lasted until the bottom of the 2nd, when a couple of dudes showed up with my tickets.  I considered telling them about it, but figured it wasn't their problem, so I just ducked out and retreated back up to the 15th row.  I knew there were a lot of open seats higher up in the section, because I’d scoped it out online before I left.  (If only I’d brought a seat map with me.) 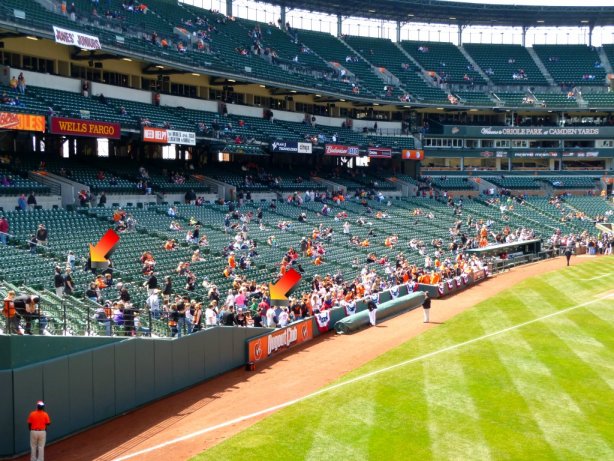 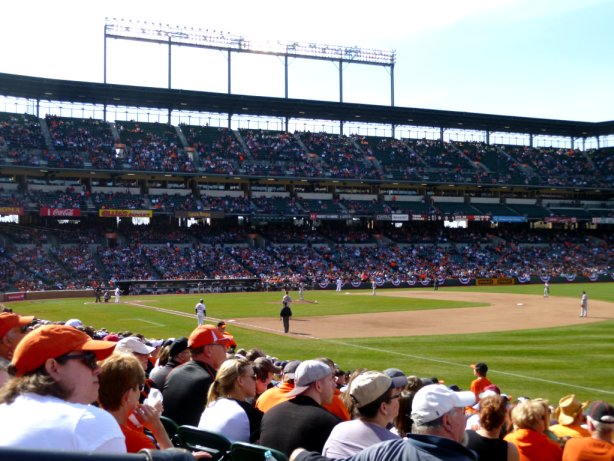 This is the view from row 15.  All in all, it really wasn't bad.  I just like being closer to the field.

So, I watched the Orioles lose from a different seat than I’d planned, sat in the sun and sunburned the left side of my face… in other words, just another day at Camden Yards.  So what’s the problem?  Let me backtrack.

After I shrewdly whittled two expensive tickets into one cheap one (grr), I went to grab a beer from the outdoor bar.  The beer was just pulled from the ice bucket, and was frosty cold.  As I took my second swallow, I felt my heart jolt out of rhythm.

You may remember from a couple of posts I did back in 2011, I've had two heart surgeries in the past, to correct atrial fibrillation.  The last one was done in 2007, and I've been in proper rhythm ever since.  I was NOT looking forward to stepping back on THAT carousel, so I hoped this was a temporary episode.  That’s why I went on with going to the game.  I hoped all the walking and going up and down steps would “jolt” me back into rhythm.

I considered going straight to the hospital after the game.  After all, Johns Hopkins, where I had my last heart treatment, is right on the subway line.  But with it being a Sunday evening, I didn't think they would have anything but a skeleton staff on duty in the A-fib Unit.  In my discharge orders, my doctor said that if I could get back to the hospital within 48 hours of going out of rhythm, they could do a cardioversion (where they shock the heart back into rhythm) without doing all the pre-op blood work and invasive tests.

So I went home and dug out my old paperwork to look up the call-in number.  Turns out, I was right… the unit is closed on Sundays, and Mondays too, for that matter.  The instructions said to call the paging operator and page the Senior Arrhythmia Fellow on call and ask for a call back, which I did.

No one ever called back, so I figured I’d deal with it in the morning.  I planned to go into work, and call from there.  Once I talked to someone, I could easily hop back on the train and be from my desk to Hopkins within 15 minutes.

But on Monday morning, I found myself out of breath merely from the exertion of getting dressed.  That was alarming, and different from my past experience with arrhythmia.  I decided to scrap my going-to-work plan right there.  And that’s how Pinky and I found ourselves at the hospital… again, for the 2nd time in four days.

To be continued…
Posted by bluzdude at 1:27 PM