When we last left our hero, he just had his heart shocked back into proper rhythm, a few days after enduring the movement of a 7-mm kidney stone.  He has NOT had a very good April.

It’s been ten days now and my heartbeat remains in rhythm.  I’m hopeful it will stay that way for a while.  The doctors gave me a prescription for the blood thinner, Xarelto, which I needed to take for seven days.  (Is it me, or does Xarelto sound like the villain in a sci-fi alien movie?)  They also gave me an additional seven pills, to be taken the moment I go back out of rhythm.

The benefit of this pill, as opposed to Coumadin, is that you don’t need to go for blood monitoring while you’re on it.  I was certainly all for that.  What I wasn't “all for” was the $116 bill!  And that’s after insurance!  My policy covered $25 and I paid $116.  I figure that’s because the insurance companies want you to be on Coumadin, because it’s dirt cheap.  Bastards.  $116 for 14 pills… unreal.

So, I had the cardioversion done on Monday, and I was back at work on Tuesday, none the worse for wear.  I thought I was home free, but then the kidney stone pain started up again.

I was at work, and I started getting pains in the same place; my left side.  It didn't make sense, because they told me I had the one stone that moved (from the left side) and two more smaller ones still in my right kidney.  I was also feeling some pain along the urinary tract, so I figured the stone might be moving on from the bladder.

When I went in to take a leak, I thought the pee looked a little pinkish; then I passed what looked like a couple small, black “flakes,” which I took to be chips off the main stone.

“The Death Star” is on the move,” I thought.  I told my boss and left work early.  I could have taken my Percocet immediately, but since I’d never taken one before, I wasn't sure how hard it would hit me, so I didn't want to be trying to get home from work when kicked in.

Once home, I began to wonder how I would capture this stone.  Obviously, I wasn't keen to just reach into the bowl.  I’d probably have to cut my arm off after that.  I should have stopped at Walgreens or something; I bet they have pee strainers.  I didn't think Pinky would let me get away with using a kitchen colander.  I considered using a coffee filter, but didn't think it would drain fast enough.  Eventually, we McGuyvered something up with an unused pair of Pinky’s panty hose and an old yogurt container. 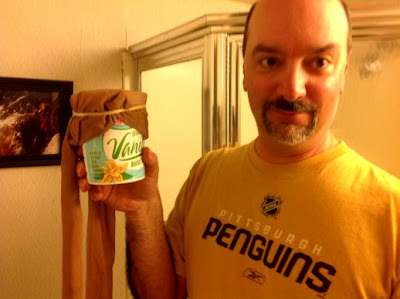 Turned out, nothing moved.  I took the Perc, the pain gradually dissolved, and that was it.  (There were no unusual side effects from the Percocet; it just dulled the pain.)  In retrospect, I think that might have been the last gasp of the urinary tract infection the stone caused.  It’s been over a week now, and I haven’t felt anything since.

When I was still at the hospital for the stone, I asked the doctor what would happen if the stone just stayed in the bladder.  He said, “Nothing.”  So I’m not worried.  My Aunt also emailed me and told me she had the same thing happen to her, about 25 years ago… huge stone pain, that stopped when it got to the bladder, and never surfaced again.

So here I am… most guys have two balls.  Some have one.  Now I have three.

I’m just glad all this stuff got resolved before this upcoming weekend.  Big doin’s are afoot, as Pinky and I head into The Burgh, to see a Penguins game and Pirates game, and hang with friends and family.

Naturally, I started coming down with a cold on Monday.  I should be good to travel by Saturday, though.  I’d better be.

Like I said, it’s been a rough April.  I've just been fortunate that I've had Pinky riding shotgun with me through all of this.  She’s been my advocate and crusader, part Clara Barton and part pit bull.  It would have sucked to go through all this crap alone.  Hospitals don’t make it easy to go through things by yourself, especially people like me who are uncomfortable asking for things or being the center of attention.

Also, I’d like to thank you for all your kind words and best wishes.  I just wish I had a better ending to this medical saga for you, but I promise to let you know if I ever get any kind of “resolution.”

I’ll try to get a short post up for you from the road this weekend, and I should have the beginning of this weekend’s update on Tuesday night.
Posted by bluzdude at 4:17 PM

Happy Friday! What color are Pinky's pantyhose? Don't want to camoflage any results. You both deserve a splendid weekend of fun and games. The Pens will benefit from your in person MoJo.
Have a safe, happy trip.

Little known fact: Xarelto is made from the crushed femurs of forest nymphs and unicorn testicles. That's why it's a little pricey. But well worth it.

No moss grows on a rolling stone. See ya this weekend.

As far as the Mojo goes, I’m wearing a black #44 Brooks Orpik jersey, and Pinky will be sporting a powder blue #87 Sid jersey. We’ve already done a fitting.

ENJOY! The Game will go on. And you will be there. In splendid Black and Blue MoJO.

The game will be going on without us now... At least we'll have the Buccos...

Wait! What does your last comment mean....the game will be going on without you?! I hope you are OK and are able to travel to the burgh for the game! Take care and hope you are OK. Fondly, Deb

Deb,
Due to the problems in Boston, the Pens/Bruins game scheduled for last night was bumped to Saturday afternoon. They then shifted the Saturday night game that we were to attend, to Tuesday night. Because we can't stay that long, I have to get rid of the tickets.

Needless to say, I'm severely bummed about the whole turn of events. But we're going to carry on... I have two non-refundable hotel rooms already paid for, and Pirates tickets in hand. So off we go...

For the love of Pete, keep the heart and stones in check.

Hope your weekend turns out great despite the Pens game not happening as planned. Now you will have a chance to see more things in the Burgh that you did not get to last time. Bright side!

Leave it to you to look on the bright side. I'll try...

I'm glad to hear that you didn't have to birth the ginormo stone! Make sure you drink plenty of water and eat healthy!!!

I love that you ghetto rigged a kidney stone catcher. Glad you're feeling better!

Now if you or Cassie were making the pee strainer, you probably would have had it all painted up and stenciled. I'm just more utilitarian.