The top news story on all channels yesterday was that a current professional athlete has come out of the closet.”  Washington Wizard Jason Collins came “out of the closet” in the press yesterday in an article he wrote for Sports Illustrated.  The announcement was historic because he was the first current player in any of the “big four” American sports to declare himself as gay.

Personally, I think it’s great news, and I hope his openness encourages other closeted athletes to stop living a lie.  No one should have to pretend to be someone they’re not.

So far, the responses reported in the media have been overwhelmingly favorable.  Numerous athletes, commentators and politicians have tweeted or been quoted as offering support.  ESPN reporter, Chris Broussard, differed stating that that Collins is “walking in open rebellion to God,” but he appears to be in the minority.  He became an instant target of social media. 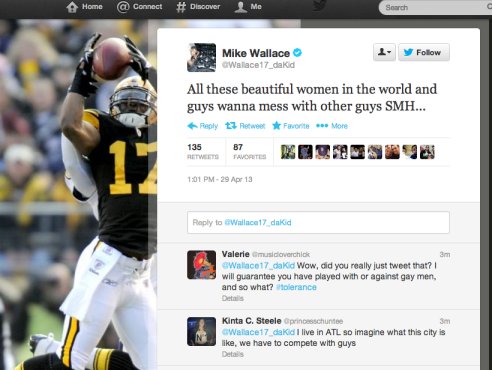 I don’t believe Wallace was being hostile, just ignorant of what it means to be gay.  Still, I’m kind of glad the Steelers let him sign elsewhere this season.  I don’t think it’s uncommon for athletes to be behind the curve on such issues.  After all, their only job, from high school, through college, through their pro careers, has been to study their playbook, develop their bodies and practice their craft.  Most aren’t Rhodes scholars, is what I’m saying.  So I’m not surprised.

Anyway, if you follow the news, nothing I’ve said so far should be new to you.  My point today is that we’ve only gotten through the easy stuff with this story so far.  All the attention and commentary on the newness and groundbreaking nature of the story is a piece of cake.  In the weeks to come we will see the hard part.

As with Broussard and Wallace, people who comment against the grain of this “feel-good” story tend to get smacked down quite aggressively.  Social media climbs all over them, sometimes their employers coerce an apology or distance themselves from the comment.

Remember that 49ers cornerback that spoke up about not wanting a gay teammate, during the run-up to the Super Bowl?  That became a major news story and the dude quickly found himself nose deep in Sensitivity Training classes.  I’m guessing a lot of ball players noticed that, so I’m not surprised there wasn’t a lot of negative commentary.  Seriously, who the hell wants to go to Sensitivity Training?

I’ll be interested to see what happens going forward.  What happens the next time Collins drops a hard foul on somebody?  What’s the dude going to call him as he gets up off the ground?

And don’t even get me started about the fans.  I think the players are Mensa candidates compared to some of the life forms found in arenas and stadiums.  I think you’re going to see a new “F-word” trending in the stands any time the Wizards come to town.  Fans may hold their tongue when the going is good, but let the guy screw up and then watch what happens.

I mean, look what happened to Kordell Stewart!  If you’re reading from The Burgh, you know what I’m talking about.  Stewart used to be quarterback for the Steelers, from the mid 90s through the early 2000s.  He was a Pro Bowl caliber player and he was basically run out of town, due in part to a baseless rumor about his sexuality, which just would not die.

There was never an ounce of proof about any of it, but everyone had a cousin’s neighbor’s brother that “saw” something going on in a local park.  Personally, I think the whole thing stemmed from the time Stewart appeared to be caught crying on TV after getting pulled from a game.  The “gay” rumors popped up almost immediately afterward, and never went away.

Now, as a Steeler fan residing far from Pittsburgh, I heard every gay-related epithet known to mankind, hurled at Stewart (or anyone wearing his jersey) from up in the stands.  And from what I gathered, it wasn’t much different on home turf, any time he threw an interception.

I know it was a different time then.  Maybe everyone just hadn’t seen enough “Will and Grace” yet, or gotten to know Neil Patrick Harris.  Maybe it will be different in 2013.

But I doubt it.

Calling another guy gay, in variable terminology, has been the go-to slur since time began.  I know that was always the ace in the hole on the playgrounds of my youth, and judging from conversations with my nephew, it is on his playground too.

So good luck to Jason Collins… he’ll need it.  I hope some more guys come out as well, and provide some cover.  There’s strength in numbers.