It’s funny how much of my livelihood is tied to a computer.  One starts to think about that stuff, once one is forced to try to recreate ties from an old PC.  I spent the weekend tweaking my new computer, trying to make it as much like the prior unit is I could, without also adding the sloth-like speed.

I was able to revive the old PC long enough to move those last few spreadsheets onto a thumb driver and transfer them over.  Phew!  The Game Jersey Mojo spreadsheet lives on!  I don’t think I’ll be so lucky with all my old emails though.  Even if I could find the file where they’re housed, I don’t think I’d be able to link them into my current Outlook.  Might as well just say goodbye and move on.

I remember the first time I had to switch PCs… I had the Geek Squad load everything on the hard drive from my first computer onto CDs.  They included the email files, but I didn’t know how to transfer them over then either.  So I took the important ones and emailed them to myself individually.  I don’t plan on doing that again, not just because it would be a giant pain in the ass, but because I almost never had cause to open them up again.

It was a different world when I got that first computer, in 1999.  There was no Facebook, no Google, no Twitter, no YouTube… You know what the big deal was?  Chat rooms.  I absolutely lived for them.

At the time, it was preposterous to me that I even owned a computer.  I didn’t know diddly-squat about them, yet there I was, speeding up the ramp to the information superhighway.  The unit came with a Prodigy account, so I hooked into a chat site that was tied to my service.  I suppose I sought out chat sites for the same reasons I used to seek out strip clubs… I was bored, lonely, and had nothing better to do with my nights.  This was a helluva lot cheaper though.

That first chat site was pretty primitive, consisting of nothing but a lot of scrolling type.  Soon after, I was tipped off to another site, called Virtual Places.

What made VP different was that each chatter was represented by an avatar, which was a postage stamp-sized picture, not unlike the one that appears at the top of my profile blurb on the upper right-side column.  This is what a VP chat room looked like: 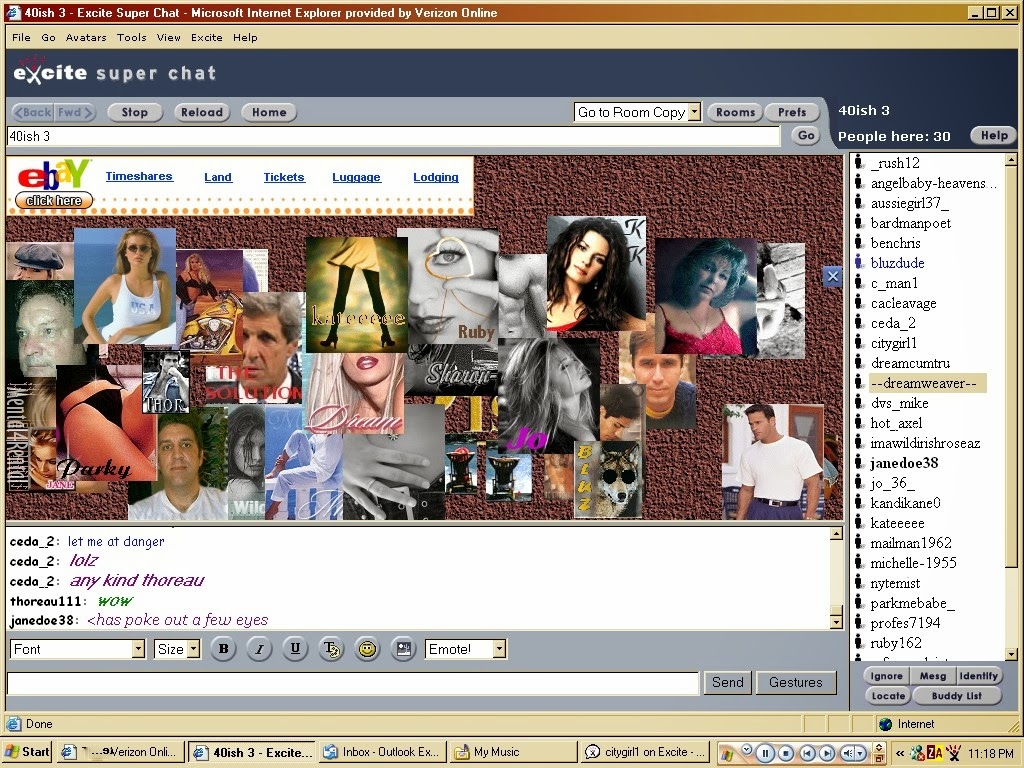 There’s a lot going on there.  The list of people in the room is on the right.  The bottom contains a scrolling dialog box.  Also, every time someone enters a comment, it appears on the avatar screen in a dialog bubble attached to the commenting avatar.  It was pretty slick.

My avatar is pretty obvious.  I had a particular theme I used most of the time… critters in shades.  It went with my “bluzdude” persona.  I’m the wolf in shades, on the bottom right-center.  (And it was the VP people that first started calling me “Bluz,” which I eagerly adopted.)  Yes, it was for the chat rooms that I first christened myself as bluzdude.  I needed something concise that would reflect how I wanted to be perceived.  More on that later.

There were a lot of options for avatars.  There were websites everywhere that offered free avatars for download.  Usually people would start with those and then personalize them by adding their chat name.  I didn’t know how to do any of that but some of the nice people in the chat room tarted some up for me.

Going into these rooms made me feel like a freshman wandering into the seniors’ hallway and trying to blend in.  It seemed like everyone knew what they were doing, except me.

All newbies start out as a “mug.”  The default avatar was a Java logo, featuring a mug of coffee, hence, being called a “mug.”  (I wonder if that’s the source for JK Rowling’s term “muggle,” meaning non-magical person…)

Soon enough, a chat veteran took pity on me and sent me a couple of avatars.  I eventually went to some of those avatar sites and found some myself, but they obviously weren’t personalized.  When I lamented that fact in the chat room, people offer to label or “paint” them for me.

One of my favorites, done by a friend.

One night I asked how I could paint them myself, and through the internal VP system, my veteran friend sent me the whole Paintshop Pro 7 program!  Then she coached me how to run the program to set it up.  Honestly, I knew nothing about computers, so her guidance was sorely needed.  But that’s how I learned how to do my own photo-shopping…  I was really lucky.  I found a number of extremely kind “benefactors” who totally set me up with everything I needed.  I have never forgotten their kindness.

VP was set up as series of rooms with different categories, with capacity 30 people per room.  I quickly realized that there was one particular room where my favorite people stayed: “40ish,” Room 3.  I was only 38, but the 30ish rooms were full of snotty, cliquey people.  40ish was far more welcoming.  I figured I’d qualify “technically,” soon enough.

The problem was that when you’d try to get in one 40ish room, it would bounce to another if it was full.  You had to keep trying until someone left as you tried to get in.  Another kind benefactor sent me an .exe file that would keep trying to enter the room, automatically until I got in.

I always found the chat culture fascinating, but not unlike any other room you enter where there’s a party going on.  I quickly learned that that it was a good idea to sit back and see what was happening in the room first, rather than roaring in like Mr. Personality.  My MO was to lay back, watch the conversations, and try to fire off some funny one-liners.  If I got LOLs, that was my reward.  In fact, I use to tally them up.  (No, I never put them on a spreadsheet.)

This was one I made.

You could also talk one on one through Instant Messages. (Aka “IMs.”)  While it’s common now, it seemed very high-tech to me at the time.  But it was nice and private, for when you didn’t want the whole room to know your business.  You could tell when someone was knee deep in IMs when their room feed went silent.

I know sometimes I’d have 2 or 3 going at the same time.  You’d think I’d be in hog heaven, but I actually hated that.  I’d much rather concentrate on one person or conversation at a time.  Hard to keep track of to whom I was saying what, without a lot of scrolling.  Heaven help I mix up the conversations.  Sometimes when I was in an in-depth IM and didn’t want to be bothered, I’d put up this avatar:

Total Babe Repellant.  It never failed.  I also used that Aye-gor avatar you see here every day, for the same purpose.  (In VP, not here!)

You could also move your avatar up against a friend’s and they would “attach,” which would trigger an IM and also show the room that you were “together.”  You didn’t usually do that unless you had some kind of special relationship with the person.

I got to know people, the regulars and customs and such, and there were still new people that wandered in all the time.  It blew my mind knowing that I was “talking” with people from all over the country and the world.  It was fun running across Steeler fans or Bowling Green grads.  We had one regular who logged in from Alaska.  Another guy was on an aircraft carrier somewhere in the Pacific.  Was weird chatting there at night, then the person you’d be chatting with would have to leave and go to work for the day.

I eventually assembled a pretty solid library of avatars.  As I said, my preferred theme was Critters in Shades, because it supported my name, bluzdude.  Unlike a lot of the other chatters, who used pictures of models, I never used beefcake avatars.  I felt like that was a form of lying.  I tried to be honest, assuming they didn’t think I was actually a typing koala.

When I wasn’t using critters, I liked avatars that showed my musical side.

Some people used their real picture, but I never did.  I wasn’t ready to be THAT honest…

Even though I knew it was an illusion, I couldn’t help but be flattered when someone w/ a knockout avatar talked to me.  So I tried not to create any illusions about myself, other than being kind, considerate and dazzlingly witty.

I’ve been so good lately at writing shorter posts, but alas, this one is not.  I have much more to cover, but I’ll cut it off here for the time being.  Stay tuned for Part Two later this weekend, when chatting leads Yours Truly down a far more scandalous path...
Posted by bluzdude at 6:53 PM

Ah, the early days of social media. I dabbled in chat rooms a bit on AOL, but I was about as anti-social then as I am now. Plus I didn't know what the heck I was doing. Those are some kick-ass avatars you got there, wish I learned how to make things like that. I've never even used MS paint.

I didn't know what I was doing either, but with chat, as with the rest of life's challenges, the secret is to keep going and learn on the fly. If you give up, you never learn anything.

Same with the Paintshop. I just went in and played with it, and the longer I did, the better I got. The ones that I made on this page (the fox, koala, fat guy and Keith Richards) are pretty primitive. If I were making them again now, I could do better, including the two-toned print. And that came from nothing but experimentation and practice.

Oh chat rooms. I remember those on AOL.

I never used AOL… They were on my “Naughty” list before I ever had a PC, just from hearing about how they charged by the hour for web browsing. They would lure you down the rabbit hole, and not let you out until you were broke. Plus, all those stupid CDs in the mail didn’t help either.