The USA/Russia hockey game was on this morning at 7:00 AM.  I DVRed it to watch later in the day, so I had to take care to avoid the news pages and social media.

Spoiler Alert: I’m eventually going to mention the outcome of the game, so if you haven’t seen it, you should come back later after you have.

The game was just a “preliminary” round game, so it wasn’t for a medal or anything.  But still, USA vs Russia!  It’s a big deal.

Olympic hockey is not the same as it used to be, when the legendary Miracle on Ice game was played in 1980.  Back then the Russians didn’t play in the NHL and the NHL didn’t send any players to the Olympics.  Our team was made up of college hockey players… mere kids.

The Russians, on the other hand, were basically employees of the Russian government.  Their jobs were to play hockey and appear in Soviet propaganda.  They had won something like 4 straight Olympic gold medals, and practically every game they played in international competition.  They were a team of grizzled and very talented veterans.  Against a bunch of college boys.  I still get choked up every time I watch the highlights.
That’s what made the 1980 victory so special.  As ABC sportscaster Jim McKay put it later, it was like the (recently-crowned 4-time champion) Pittsburgh Steelers playing football against a group of Canadian college kids.  I’ve often said, that was the biggest, most incredible game of any sport I’ve ever seen.  (Running just behind: the Steelers winning Super Bowl XL and the Penguins winning Game 7 of the 2009 Stanley Cup Finals.)

The current Russian team is hardly the cast of villains from the old days; in fact, they employ one of my favorite players, the Penguins’ Evgeni Malkin.  Of course, they also have one of my least favorite players, Alex Ovechkin, so it kind of balances out.  Still, there’s not the hate that there used to be, at least not for the players.  (Don’t get me started on Putin.  Once KGB, always KGB.)

So the Russians are still loaded with offensive talent, with some of the most dazzling scorers and snipers in the game.  The US team is more like a group of talented grinders, with good hands.  But I don’t see anyone that could compare with Malkin, Ovechkin or Ilia Kovalchuk.  They do have a significant Penguin presence though, with defensemen Brooks Orpik and Paul Martin, with head coach (and Bowling Green man) Dan Bylsma.  So my Penguins loyalties are somewhat split.  I root for the USA, but I hope Geno does well.

It must be weird, though, having to coach against one of your own players… in this case a guy you need to play well once the Olympics are over.  At one point in the game, the rink-side announcer/troll Pierre McGuire said that the coaches told their guys to be sure to hit Ovechkin at every chance.  I doubt they gave the same instruction about Malkin.

I was thoroughly impressed with the quality of the hockey… it was like watching an All Star game, only everyone was playing their asses off, rather than going through the motions and trying not to get hurt.
Another thing that made the game enjoyable: no glass pounding.  All of the area behind the glass was used for photographers.  The first row of the crowd was at least 4 feet away from the glass.  Why is that important?  No glass pounding.  I hate that.  There’s no reason for those first row dipshits to pound on the glass every time the puck comes near, like a bunch of pissed off chimps at the zoo.  All that banging means just one thing: “HEY LOOK AT ME!  LOOK AT ME!”  Idiots…

There was a gap behind the benches too, so you didn’t get shots of the same dipshits clowning around behind the coaches, either.

The game was a thriller; no one ever led by more than a goal.  Malkin looked like a beast, even though he didn’t score.  Orpik and Martin were solid in their own end, although Orpik did let a guy get past him for a goal.

It was 2-2 with less than 5 minutes to go in the third period when the Russians appeared to score.  It was waived off though, because the goal posts had become dislodged from their holes.  (The Russians are pissed, but that’s the rule.)  The game went to overtime, and no one scored there either.  USA’s Patrick Kane had a breakaway, with no defenders even in the same zip code, but he couldn’t convert.  So the game went to the dreaded shootout.

I didn’t realize until today that there is a difference between shootouts in the NHL and in the Olympics.  In the NHL, more guys from the bench would come out and take their turns, until there was a winner.  Today, only the same three guys could do all the shooting, and they didn’t even have to take turns.
They stayed even up until the 8th round.

The Russians alternated between Pavel Datsyuk and Kovalchuk.  The US had TJ Oshie take all the shots.  (He was the only US guy to score in the first round.)  But in the 8th, goalie Jonathan Quick made the save and Oshie went 5-hole to score the winner. 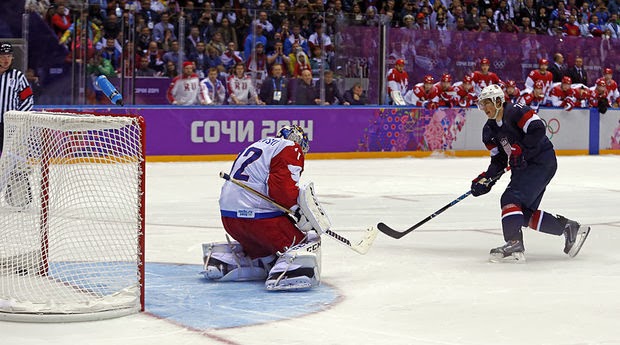 (Source)
It was an amazing game, and I’m hoping it sets the stage for a medal-round game with Canada.  It ought to be a stellar tournament, going forward.

I just hope it’s not the last.  Word is that the NHL owners are not happy about shutting down the league every four years, to let their players go to the Olympics.  I’m pretty sure, though, that Penguins ownership (namely Mario Lemieux) won’t object, because as a former player for the Canadian hockey team, he knows how important it is to represent one’s country.

My prediction is that the NHL players will continue to go to the Olympics.  I’m no expert, but the Player’s Union should have an extremely advantageous bargaining position.  It goes something like this: “We’re going and you can’t fire us all.  If you try it, good luck filling your arenas by using replacement players.”

The owners should realize that the fans will almost unanimously side with the players, because Olympic hockey is a tremendous product.  Who wouldn’t want to see the best players in the world facing off against each other?  Should the owners play hardball, they’ll be seen as tight-fisted and anti-patriotic.  I think they’ll suck it up and take one for the country.

The US plays again tomorrow; I’m not sure when.  But they’re playing Slovenia, which sounds like a made-up country from a comic strip, so I probably won’t take extraordinary steps to watch.  We’ll see.
Although maybe I should… you never know if a game like this might become a “Miracle on Ice” for a team like Slovenia.