Can't Anyone Just Lose Any More?

If the Olympics are teaching me anything, it’s that no one ever loses at a competition.  If a person or team come up short, everyone has to claim conspiracy.  It’s crazy!  Sometimes it’s the fans, other times, it’s the participants.

Have our collective egos been so padded for so long, we can no longer comprehend losing?  I thought that was an American thing, but we’ve apparently exported it all over the world.  I mean, look at the headlines from this week’s Olympic competitions…

Russians are protesting over the disallowed goal in the US/Russia hockey game.  Students are rallying outside a Moscow university, with a sign that says, “Turn the referee to soap.”  This is a common chant at sporting events, implying the ref is fit only to have his bones and body fat boiled down for soap.  Flyers fans should take note.  That one stings a little more than “Crosby sucks.”

Canadian fans are charging that there was a judging conspiracy that favored the US ice dancing team, who won the gold medal last night over the Canadian pair.  And even the Canadian skaters charged that their coach (who coaches both pairs) favors the Americans.

As a quick aside, I can’t help but stare at the female half of the US ice dancing pair, Meryl Davis.  She’s totally adorable, but is it me, or are her eyes really far apart?  I mean, it seems like she can stand behind a tree and still look right around it.  Today Entertainment Weekly made this comparison: 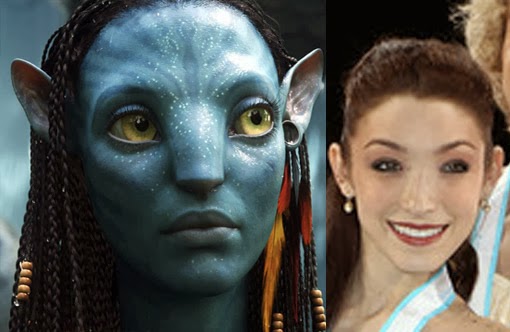 Now getting back to my main point, that no one takes the blame for losing any more…

The US speed skating team completely psyched themselves out over their new Under Armor skating suits, which they wore for the first time during these Olympics.  (We can debate the wisdom of that move, later.)  They got clobbered in their opening rounds, so they decided it was the suits’ fault.  So they went back to the suits they wore when they dominated in their previous meet, and got clobbered again.  This time, heavily favored skater Shani Davis said, “I feel like the damage of the suit was already done.”

Are you freaking kidding me?  If only we’d known these guys were such fragile flowers, maybe Under Armor could have popped for a team of psychologists, rather than ultra-modern skating suits.

Norway says there’s a ski wax conspiracy, after their poor showing in cross country skiing.  What I want to do is send Cassie up there to have a talk with her countrymen.  I think they’ve forgotten their Viking heritage.  If their prime ski wax supplier was holding out on them, then go plunder their warehouse and loot the office.  Maybe they’ll screw the Swedes next time.

Even the sled sports are catching onto the blame game.  The Canadian luge coach is charging that the Russians are changing the temperature on the track, to ensure the Russians medal the other teams get slowed down.

I don’t know when all this bullshit started, but it’s been going on far too long.  I used to think it was mostly a Baltimore thing, after watching the Ratbird fans claim conspiracy over penalty calls, scheduling inconvenience, and even the power outage at last year’s Super Bowl… a game that their team freakin’ WON!  They were lining up their excuses in advance!

So now we see that the Not Our Fault tactic has busted out worldwide.  Every loss has to be pinned on some kind of nefarious outside force, because no matter how far-fetched, it’s easier than accepting that you (or your heroes) lost.  People don’t want to accept that they can work hard and train hard and want it really, really badly, but still lose.

Why can’t people embrace that sometimes, the other team was better?  They train hard too.  It happens.
People, I know Mommy always said you were Number One.  But didn’t she also ever tell you there would be days like this?

The whole thing makes me want to go Number Two.
Posted by bluzdude at 6:57 PM

Email ThisBlogThis!Share to TwitterShare to FacebookShare to Pinterest
Labels: Baltimore Ratbirds, Best of Darwinfish, Bullshit, Morons on Parade, Things That Piss Me Off, TV Bluz

Blame it on GUNS or Politics better yet Religious beliefs.... Ahhhh just blame it on me I've got wide shoulders.

I had heard a couple of these whiner stories, but didn't realize it was such an epidemic. It's good to know that the US doesn't have a monopoly on sore losers. Didn't the Canadian pair win gold in Vancouver? Yeah, stop crying.

Is Meryl Davis really that attractive? Another blogger said she was hot, but I think your Neytiri comparison is more accurate.

p.s. that Dan Bylsma gif was awesome. You have no... marbles!! lol.

Well, if there's an upset in the biathlon, I suppose one could blame it on the guns. But the Olympics are supposed to be above politics and religion. Unless God really does hate certain countries...

Well, I think she's cute, in an exotic kind of way. And she's much more attractive in with her "everyday" look, as opposed to when she's painted up for competition.

And yes, the Canadian pair won gold at the last Olympics. They had their turn in the limelight.

It always cracks me up to see people emulate the fabled Cerrano Big Balls Strut.

I'm pretty sure my countrymen are a little off their rockers as of late. The one dude started celebrating before he even crossed the finish line! But he quick realized his mistake before he lost the gold. SMH.

I saw the Jasmine comparison too, and that works as well. But the Avatar one is funnier,

Basically, everyone needs to man up and stop acting like twats. Or, at least, that's what my mama always told me.

Your Mama has great wisdom.

But the Olympics have always been about politics and religion! My god can whip your god. And look cute doing it.

When I heard that Shani Davis interview, I was appalled. First, I thought it was utter bull that they were blaming the suits, and then when he said that the suits had already done the damage, I turned to my hubs and was like, "so what, are they now claiming that there is some substance IN the suits that has seeped into their skin to make them suck?" I mean, come on. Just own it. You are not performing as expected and the other racers are better. Personally, I blame Apolo Ono. He never should have retired. HE would have won, suit or no suit.

I mean, seriously! How about some accountability? You’re right… even if the suits were a hindrance, the effect should have disappeared as soon as they stopped wearing them! The fact that they continued to get their asses handed to them tells me it’s more “user error” than equipment malfunction.