Maybe you’ve noticed, or maybe you haven’t, but I’ve slowed down my posting schedule.  There are several reason, only one of which is the dreaded Winter Blahs.

The primary reason is more technical.  I’m putting up this post via iPad, because after almost 10 solid years, my trusty XP-running PC has finally given up the ghost.  (Or “data,” if you will.)  The power went out to my building last Monday, and when it came back on, my PC was left unresponsive.

That’s happened before, and I’ve always been able to bring it back to life. 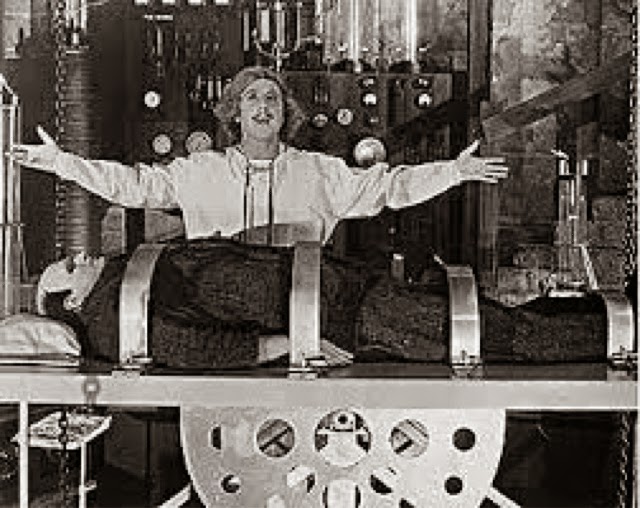 Not this time, however (or I would have photoshopped my PC into that shot).  But it’s really all well and good, because as you know, Microsoft is discontinuing support for the XP operating system in April, meaning I would be without security updates from then on.  The Internet has been rife with predictions of horror and evil waiting to be loosed upon the XP clingers, like the hot lava from Mt. St. Helens on those that refused to get off the volcano.

So I knew I’d have to get a new PC anyway… and now my hand has been forced.  It’s not like I wasn’t looking forward to a newer, faster computer.  My current PC is maddening in its slowness. Whenever I want to do something, it always seems to need to furiously do something ELSE, which uses up all its memory and speed.

One of the reasons I’ve been putting off replacing it has been my apprehension about being able to carry over bookmarks, emails and email addresses.  I’ve got 10 years’ worth of shit on that box.  The hard files like pictures, videos, spreadsheets and all my blog post drafts have been backed up, so I won’t lose those.  [knocks wood frantically]

What I have to say goodbye to is a ton of past communication.  Oh, I know I could hire the Geek Squad to resurrect my hard drive and squeeze out my email records, but I probably won’t do that.  I’ll start fresh… but that means I’ll have to rebuild my cache of email addresses.

Family will be easy… I’ll just mine the addresses out of the jokes my dad sends to everyone he’s ever met.  It’s your address that might take some doing.  I have the addresses to some of yinz on my work computer and others in my Yahoo account, which I can access from my iPad.  Short of that, I may eventually send out a plea via blog or twitter.  So I’ll work it out.

But it’s kind of easier this way.  Now that I don’t have to worry about how I’m going to bring all that stuff over to a new drive, I can just get on with updating my hardware.

The other barrier was that I don’t want to deal with Windows 8.  I’m no computer genius, but I know what I like.  I’ll save all the touch screen bullshit for phones and tablets.  (Well, other people’s phones, anyway.  Love my 2006 flip-phone!)  When I want to write something, or work on spreadsheets or photo editing, I want a big, honkin’ desktop, a keyboard, and a mouse on a decorative mouse pad.  Call me when they come out with the 3-D holographic interface I can manipulate with my hands, like in every futuristic movie and TV show from the last 10 years.

So then I read that you can still find PCs with Windows 7, if you search online.  I found that while Best Buy didn’t have any on their sales floor, I could order one from them on their website.  So I did; delivery should be later this week, or early next week.

Then, I’ll have to try to remember all the bells and whistles I’d like to continue to use, that I put on the last unit.  (Hello Google Chrome!)  The problem will be figuring out where I got them.  I’m a good one for reading about a hot new app, clicking a link in the article to download it, and then discarding any record of what I just did.

More importantly, I have to get the thing hooked up to the internet.  Gah!  I hope it’s easier now than it was 10 years ago, when I had to enter all this connectivity information, just to get my Outlook working with my email providers.  Seriously, I don’t have that information any more.  If I can’t successfully Google it, I WILL have to call in the Geek Squad.

I also have to secure new versions of the MS Office apps, and a new photoshop program.  I’m pretty sure my Paintshop Pro 7 won’t boot up on Windows 7.  (It wouldn’t when I tried to have our Tech Support put it on my Windows 7 work PC.)

So seriously, I have my work cut out for me.  If you don’t hear from me for a while, send in the Geeks!

Connecting to the Internet is pretty much plug and play. I have a Windows 8 super light laptop that is kinda of like a tablet but has a full keyboard and I hated the transition and miss Windows 7. Good move purchasing a machine with 7 on it! I don't know anyone who has not been affected by this stinkin' weather during the past six or so weeks. And tomorrow is another snow event. I am so tired of hearing the dire forecasts days and days ahead of the storm and then by time the storm arrives the accumulation never resembles what the forecasts said. Who can keep track of it anymore? At least the new computer will give you something new to do and maybe will be the pick me up you need to shake the doldrums.

Wouldn't you know it. About 10 minutes after I made this post, themes PC came... At least 2 days early. Like you said, it pretty much was plug and play. Only a couple of drawbacks, but I'll have to make do. With all the snow coming, I'll have plenty to tinker with, that's for sure.

I had also recently heard that XP is ending. I have XP on this PC that I am typing this on. I pretty sure sure I screamed out loud when I heard that.

I have been thinking about getting a new laptop for about six months. But something seems to always come up, I too am anti-Windows 8, and well, I am just lazy. I might have to spring into action soon, though.

If you hurry, you might be able to land a unit with Windows 7 on it. My new one is working fine... I love it. Plus, I have the benefit of, for the first time, running the same OS at both work and home.

Hey, if you come back to look for my reply, please email me. I don't have your email address any longer.