How to Spot a Knockoff Baseball Jersey

This is a post I’ve been meaning to write for a while.  I was going to cover football and hockey jerseys as well, but I had so much material just on baseball, I figured I’d break it up.

As you may know, authentic game jerseys are insanely expensive.  True licensed game jerseys generally run over $300.  That’s a lot of dough to lay out for something you’re not wearing every day.  So in response to the high cost of wearing “authentic,” a whole cottage industry has sprung up overseas, to sell jerseys that at first glance, look authentic, but only cost $20 to $40.

The thing is, there’s a reason that the genuine authentic jerseys cost so much… quality.  Every detail is usually perfect with the official product.  The knockoffs… not so much.  They’re generally produced in China and other East-Asian countries, with the obvious goal of producing them as quickly as possible.

What I’m going to do today is show you what to look for, so that you can tell the difference between a knockoff and the real thing.  Granted, if you’re buying online, like through Ebay, you won’t be able to tell as easily.  (Big hint though: if they’re offering an “authentic” jersey for $100 or less, it’s a knockoff.)

Now, for demonstration purposes, I only have Orioles and Pirates jerseys.  But the principles will remain the same.  You can apply what I show you to any team.

As a baseline, these are what Orioles jerseys are supposed to look like. 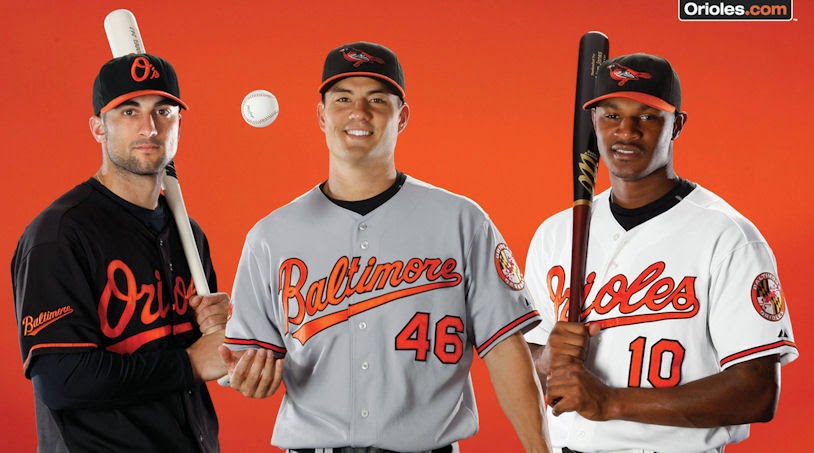 They also have orange jerseys, which aren’t pictured.

Here are some tip-offs for a knockoff jersey:

Check the Neck
In the picture above, you can see that the neckline of the jersey is fairly high up on the players. 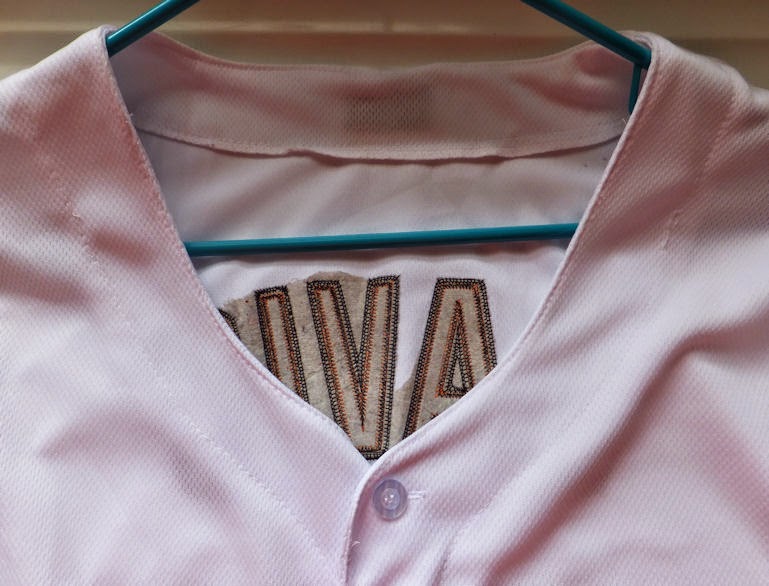 On this one, the neckline plunges to about mid-sternum.  (If I was wearing it, you could tell a lot better.)  The low neckline means you absolutely have to wear a t-shirt underneath, lest you look like a hotel lounge lizard, circa 1985.

The neckline is also supposed to meet evenly. 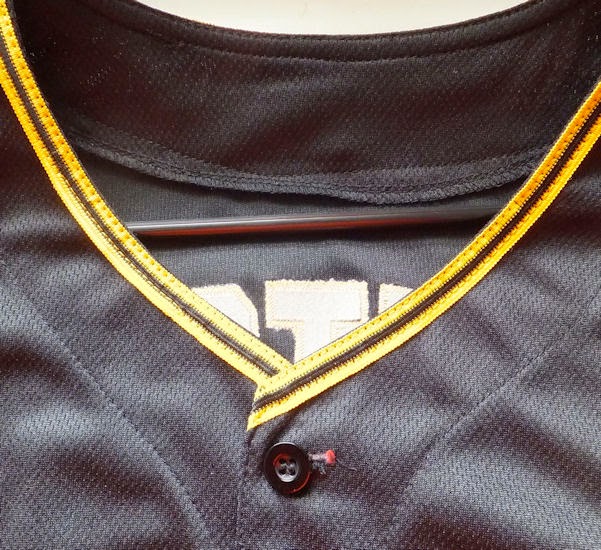 This one clearly misses the mark.

Messy Stitching
The stitching on a genuine authentic is firm and straight, with few stray ends.  As opposed to these: 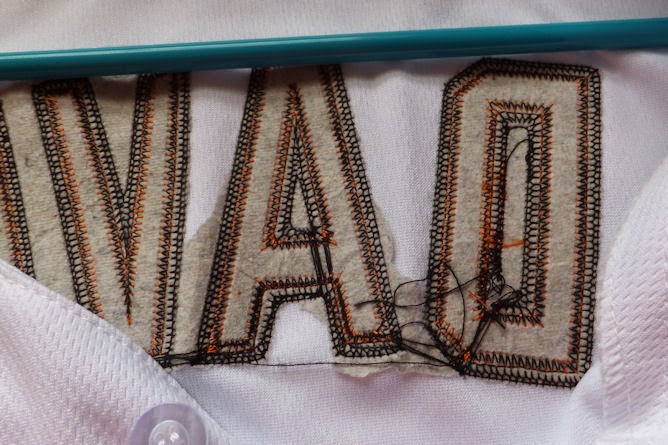 Even if it doesn’t show, because it’s inside the jersey, this is still a mess. 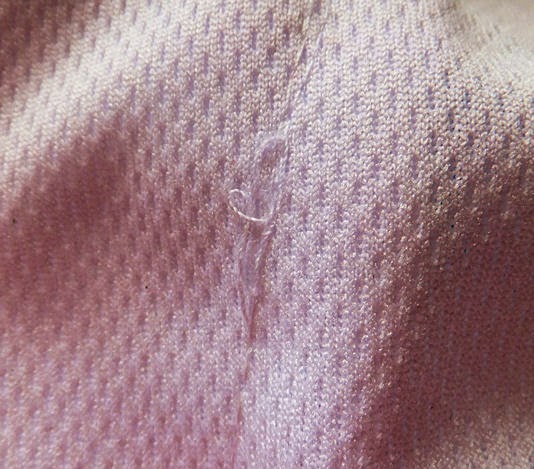 Threads shouldn’t be pulling out at the seams. 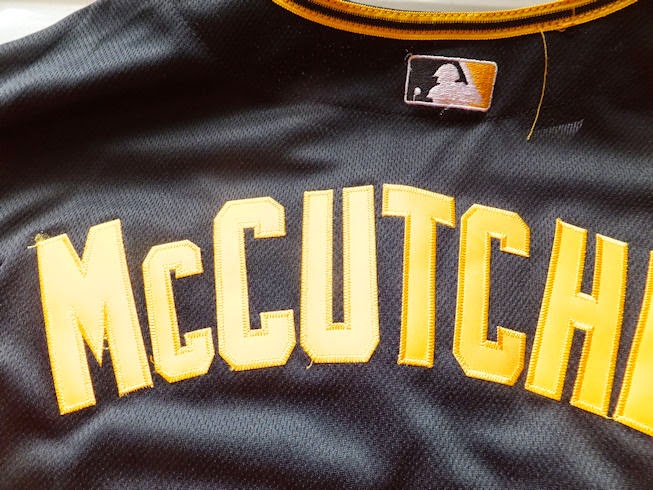 Lots of loose threads here, from the collar and the letters.  With the letters, also check the spacing.  Sometimes they get condensed, other times, too spread out.

Stitching Shortcuts
I really hate this one.  Sometimes, they don’t tie off the thread before moving on to the next section, leaving it dragging over the letter. 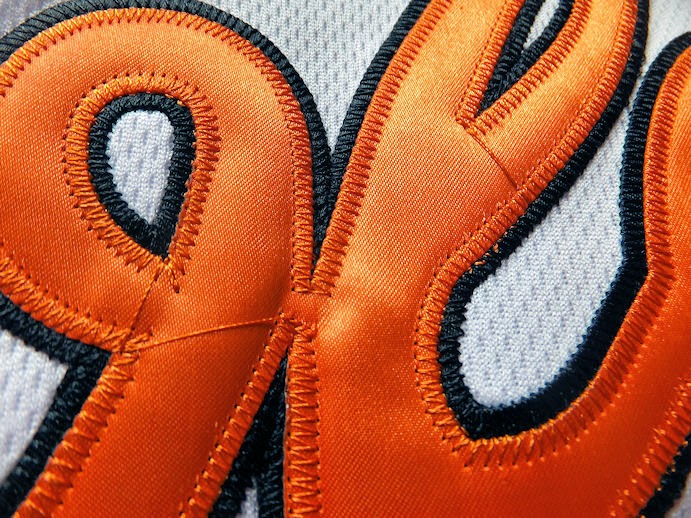 You can see that happen three times on this one section. 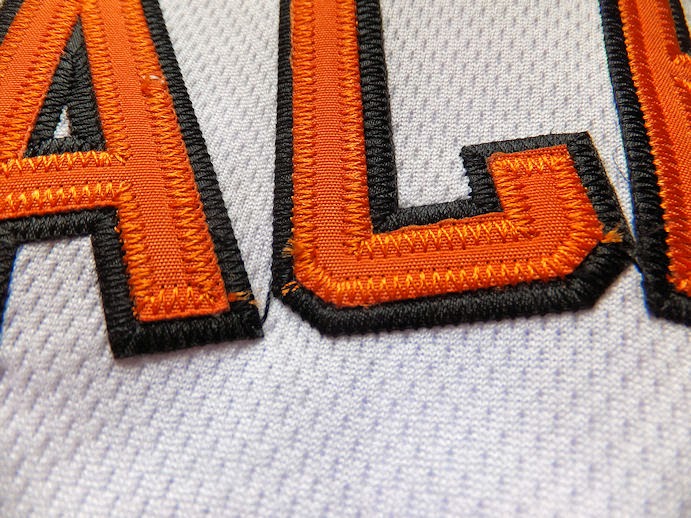 They ran the thread directly from one letter to the next, without tying it off.

Bunched Under-Sleeve
The opening of the sleeve hole should be smooth and even, not bunched up like this one. 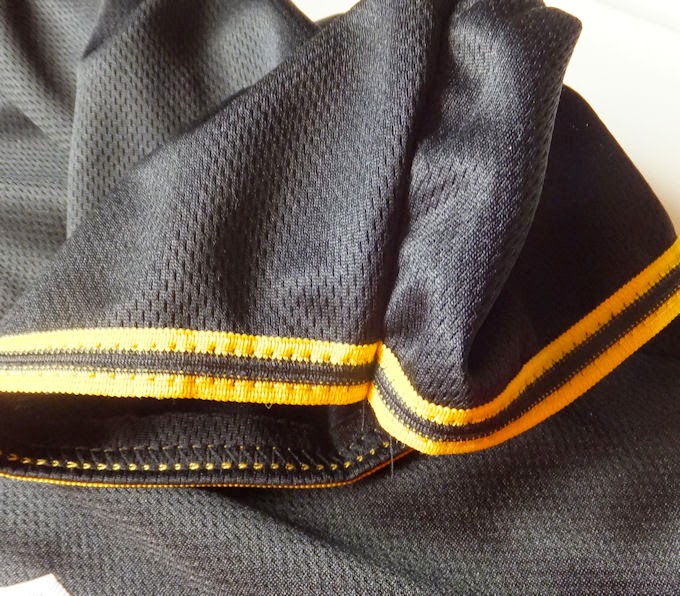 Loose Buttons
Buttons are a primary area for loose threads, with may result in losing the button. 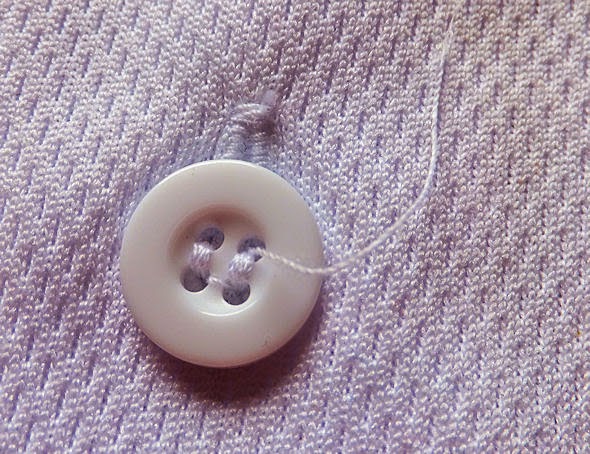 Logo Gap
This one probably bugs me the most, just because it’s so careless.  The thing with baseball jerseys is that they are usually buttoned up, so the logo has to stretch across the opening.  That means they have to be careful to make sure both sides line up, and it looks like an unbroken word. 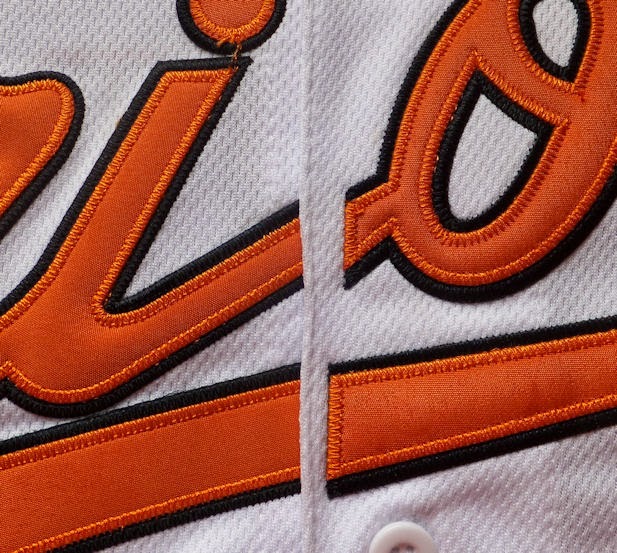 This one isn’t even close.  They need to bring the orange script right up to the edge of the seam. 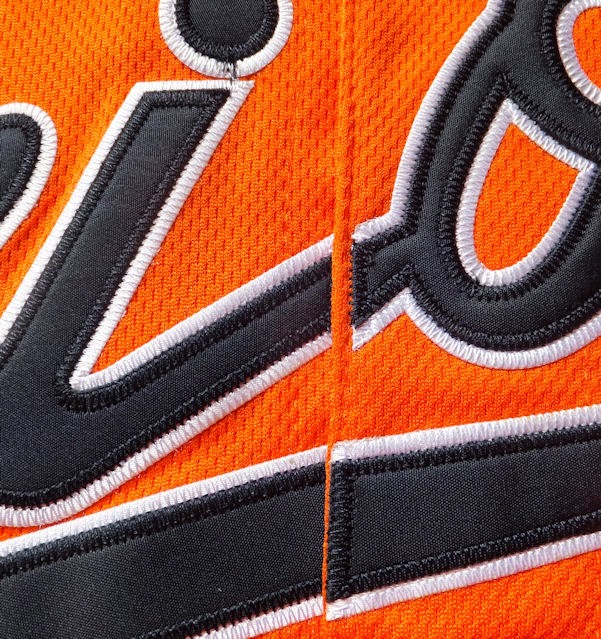 They got this one half right.  The bottom is OK, if not perfect.  But they whiffed on the top.

Incorrect Detailing
At minimum, they need to get the details right.  For example, the Orioles have an orange stripe on their sleeves, not black. 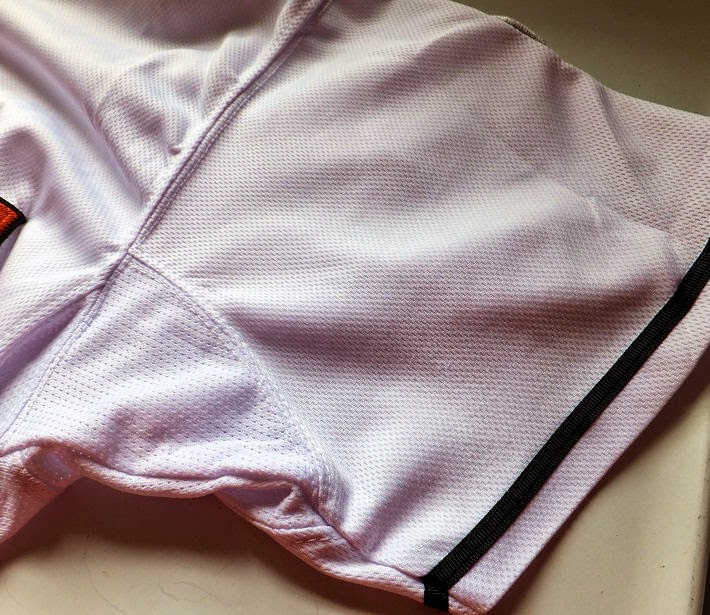 Wrong Color
Another big one… make sure they get the color right.  I’ve mentioned this one before, but I got a jersey that was supposed to be white, but was actually a cream color. 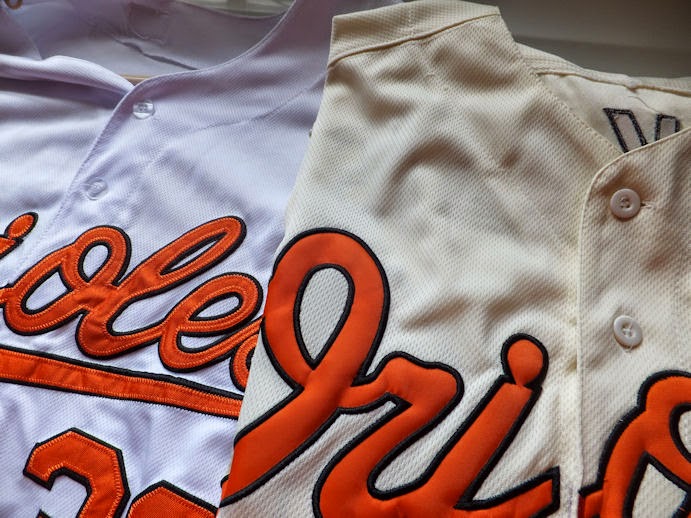 The one on the left is the correct color; a blinding snow white.  The beige/cream deal just looks dirty, in the sun.  It looks like I washed with a bunch of rusty lug nuts.

The one on the right is a bright, neon orange.  The one on the left is a deeper orange.  And the funny thing is, I’m not even sure which one is right.

At the end of all this, you might think I’m really down on the knockoffs.  Sure, I’m being all critical and stuff, (because that’s what I’m good at), but obviously, I’m still buying them.  Why?  Because I don’t want to pay $300 for a jersey either!

So now if you’re ever in the market for a baseball jersey, you’ll have these tips in hand, which can help you avoid paying “authentic” prices for a knockoff jersey.

I’ll be back later with tips on football and hockey jerseys.  (Maybe this week, maybe closer to when the seasons start.)
Posted by bluzdude at 12:58 PM

You know your stuff! I am looking forward to your post about the football and hockey jerseys, since I have both of those. I am 99 percent certain my Mark Recchi Pens jersey is the real thing because I *think* I bought it from the Pens (but that was 23 years ago, so I may not remember that correctly). But I do remember it costing me $85, which seems legit since it was that many years ago.

I think the retail price for my Hines Ward jersey was about the same, though maybe as little as $65 (I paid much less than that as a friend used to work there). But since that was only 12 years ago, and purchased at Dick's Sporting Goods, I think it is a safe assumption that is a knock-off.

But both jerseys are signed by their namesakes, so they are priceless to me!

I think your Recchi is in the clear because A) the knockoff market wasn't there (at this level) 23 years ago, and B) you bought it at a reputable retailer. Same with your Hines jersey, regarding the latter point.

As far as retailers go, your more apt to find knockoffs at smaller, mom and pop corner stores and gift shops. (That Steelers/Penguins shop at Breezewood used to be loaded with them, until the Feds confiscated their unlicensed goods.)

As far as identifying the knockoff, just use the same principles as in the post... look for variations in materials, detailing and stitching.

This is exactly why I make my own with an old tshirt and a sharpie marker.

You should make a whole bunch and sell them on eBay! Put the girls to work on them... Val's Sweat Shop!