My apologies for the “radio silence” since last week; there were underhanded doings afoot.

My mom turned 75 this week, so earlier this spring, Dad cooked up a plot for all of her kids to show up down in Florida for a surprise party.  I went down with my brother and his family, and my sister and her husband came in from Ohio.  It was all very hush-hush, and of course, there were almost a few leaks.  Bluz Sister has a real problem keeping something quiet, especially from our mom.

So we all came into town on Friday and assembled at my folks’ favorite restaurant at the appointed time.  Then… Surprise! 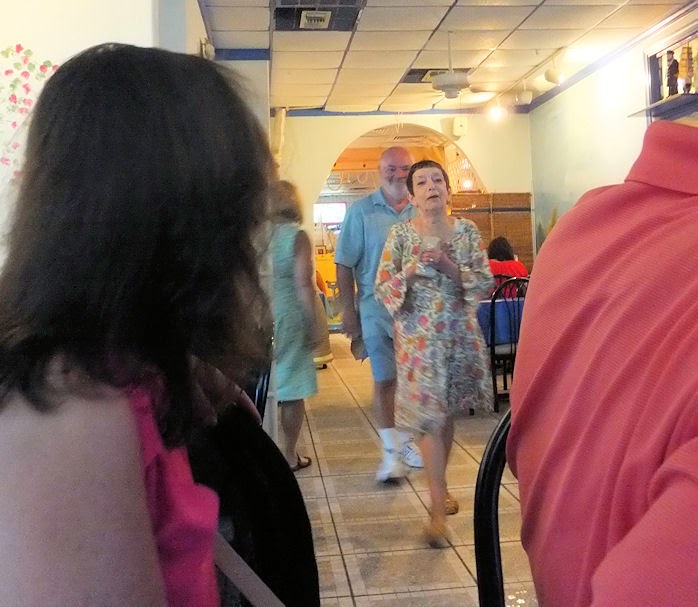 The moment she noticed her offspring loitering out in the back room.  She was probably afraid we wanted to move back in with them.

Yes, she was quite surprised.  Luckily, she didn’t faint (or pee).  You have to be careful when you ambush a 75-year old lady.

While we enjoyed a fabulous dinner, their neighbors began filling up their house, so when we all showed up afterwards, it was on to Surprise Part Two.  Much exaltation and drink-pouring ensued. 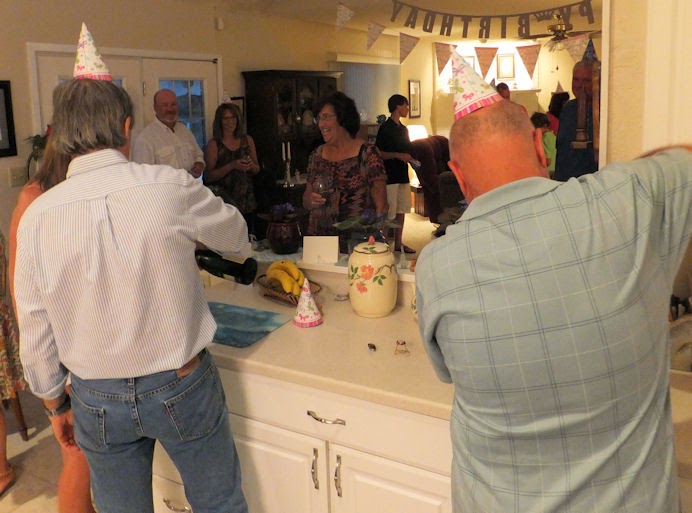 Of course, we had to “outfit” the birthday girl.  Dad had this one in mind for months. 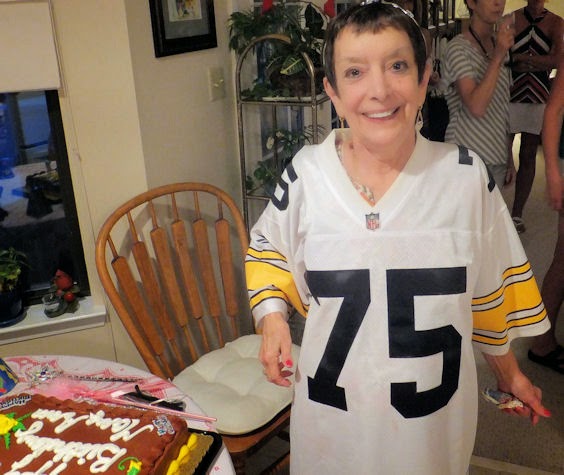 Our stay was from Friday through Tuesday, so we still had lots of weekend left to play.  My brother-in-law made sure we had plenty of snacks. 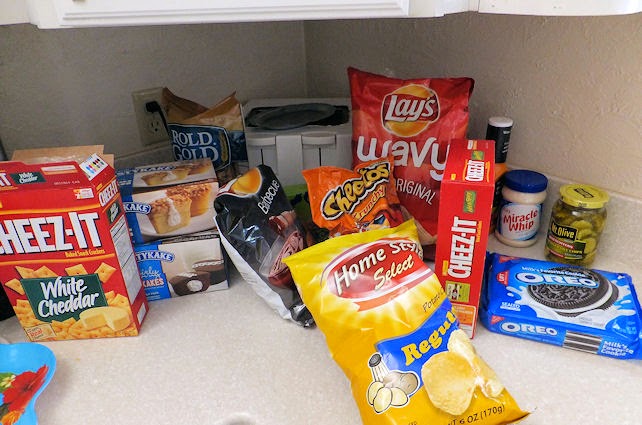 This is a sight that I never, EVER saw in our house.  We had to snack on pencil shavings and dryer lint.

The big chore of the weekend was to help Dad.  See, he had his “panel of experts” in town, so he figured it was the perfect time to replace his antiquated TV.  He got it quite some time ago, when flat-panel sets were new, and just before the tech took a huge leap forward. 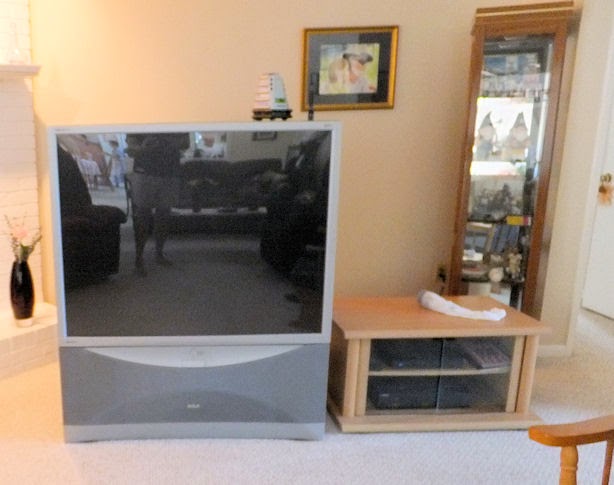 It was a monster.  It was supposed to be Hi-def, but it was nowhere near what modern TVs can do.

So, we lit off for Best Buy and came away with a fresh new HDTV and sound bar. 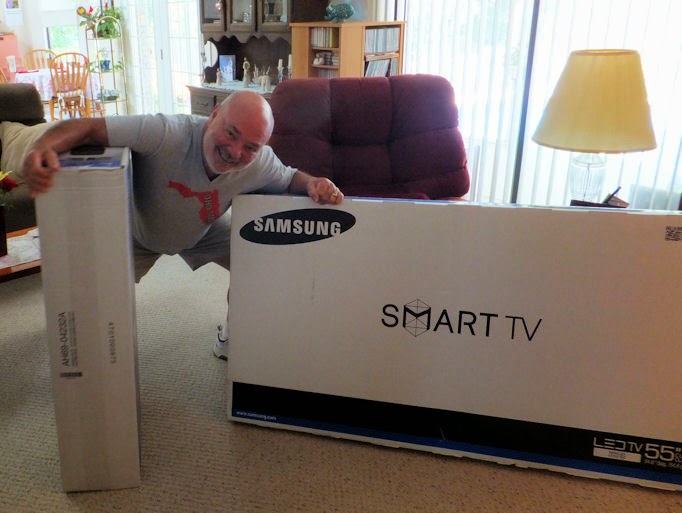 Funny how a thin little sound bar has to come in a huge box.

We all* flew into action to get it set up. (*Mostly my brother and brother-in-law.) 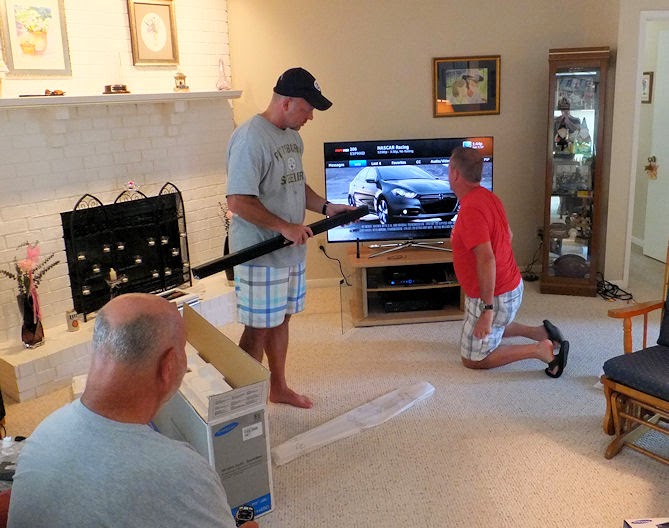 The brothers set up while Dad wonders how soon it will be until he can watch Law and Order.

By the time it was all done, and we had done some significant picture rearranging, it looked like this. 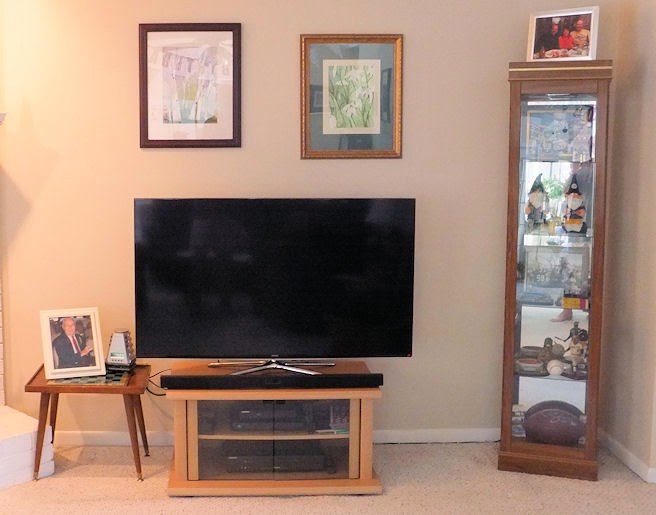 It all turned out beautifully.  Totally made me jealous too.  I need to upgrade my gear now too.  (Probably not this year though.)

We ate out a great deal… obviously we didn’t want Mom to do a lot of cooking.  But geez, that’s all we did this weekend… eat drink and shoot the shit.

As we were sitting around on Saturday, I realized it was the perfect opportunity to introduce my nephews to the “Farting Contest,” the 40s-era “sporting event” I wrote about in 2012.  I called it up on my iPad and let it rip.

There some things that are universal constants.  One is that it never rains when you go to the trouble of bringing an umbrella.  The other is that young boys find farts hilarious.  It was heart-warming to me that I could entertain the boys so heartily.  Not sure their mother agrees though.

On Monday, Mom’s actual birthday, we did a cookout.  My BIL grilled up a whole mess of pork ribs, to which Mom added chicken, corn, and salad, which obviously doesn’t count as “cooking.”  But what a feast! 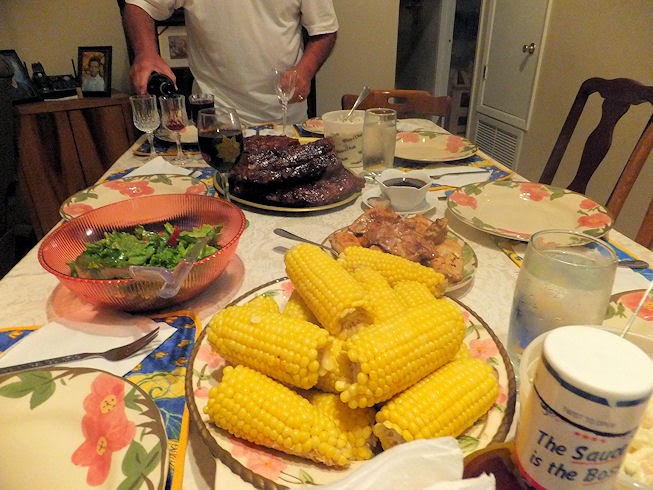 Our flights out on Tuesday were swift and uneventful, just the way we like them.  I was glad that we could pull off something like this for Mom.  There just aren’t that many occasions where we all get together, outside of weddings and funerals.

I’ve said before; I am a genuine combination of both my mom and dad.  From Dad, I got a sense of practicality and a need for things to make sense.  (And many other virtues as well.)

But my creative side… writing, blogging, photography, political activism; that all comes directly from my mom.  She instilled in me a love of words and wordplay at a very young age.  Every time I sit down here to tap something out for you, it’s because of her.  (Even the fart jokes.)

So if you’ve ever enjoyed a post or two here or chuckled at a particular turn of phrase, you can thank my mom.  Or blame her, as the case may be.

Without her influence, I’d probably be outside poking things with a stick.