I call it “boomeranging” because I was there and back real quick.  Drove out Saturday; returned Monday.

This weekend, I went out to Pittsburgh for my cousin’s wedding.  It was an easy trip out Saturday morning, probably because I had to leave early.  The wedding was at 3:30, so I set out around 8:00 and pulled into my hotel by 12:15.  I actually got about 35 miles of uninterrupted cruise control, which rarely happens with me.

This was an outside wedding and reception, which took place at an old B&B with a large back yard and adjacent horse field.  In one respect, it was a beautiful setting… green grass, sunny day, everyone all dressed up. 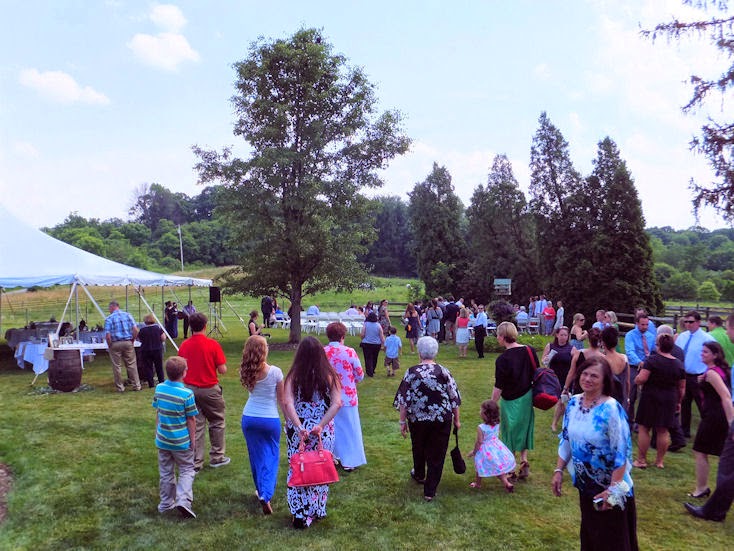 On the other hand, have you ever sat out in the afternoon sun, wearing your best clothes?  I wasn’t lucky enough to have drawn a seat in the shade, so I had to sit and stew in my own juices.

At one point, I reached back and felt where my back was up against the back-rest of the chair, and my shirt couldn’t have been any wetter right there if I’d dumped a drink on it.  I should have done like my dad did, and just wear slacks and a polo shirt.  For him, a Florida retiree, it was a big concession just to wear long pants.  And the polo didn’t even have a Steelers logo on it! 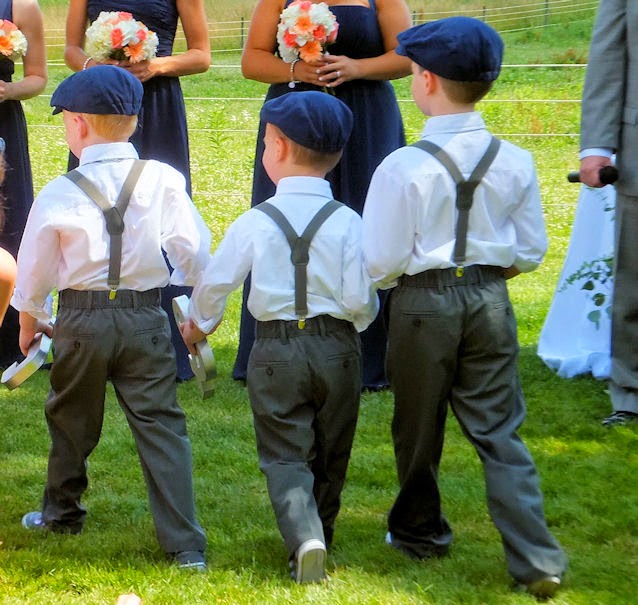 The “Tri-Ring Bearers.”  Now these boys know how to dress!

Luckily, it was considerably cooler once they wrapped the ceremony and we could adjourn to the reception tent (and start pouring drinks).

Any more, my cousins’ weddings have become our de facto family reunions.  Hey, I’ll take any opportunity to hang with my extended family, eat like a king and drink the good stuff. 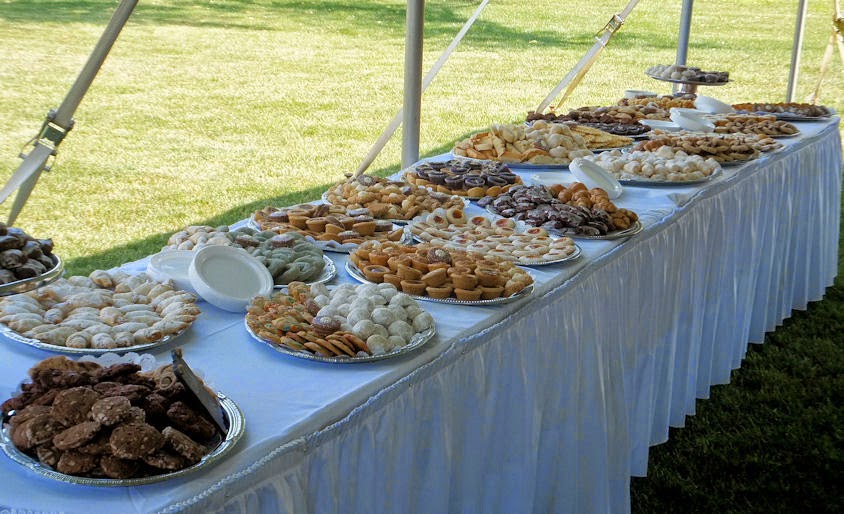 I’ve blogged in the past about my cousin Angela… her appearance on Fear Factor, and her having a baby boy the same week Cassie had her daughter Mae.  (Angela’s son EJ is the middle boy in the ring bearer picture.)  My nephew, Daniel, was ring bearer in her wedding, and seemed to strike up a friendship with the flower girl.

This wedding was for Angela’s brother Jeff, so we basically had the same cast of characters in attendance.  Now, Daniel has changed a lot since 2010, but not nearly to the degree that the flower girl did.  What once was a tiny little girl was suddenly sporting a bod like Beyoncé.

My brother, brother-in-law and I kept trying to get Daniel to go over and talk to her, or ask her to dance.  I told him, “Don’t sweat whatever you have going on back home… what happens in The ‘Burgh stays in The ‘Burgh.”

I think the boy was scared to death of little Beyoncé.  He was probably right to be wary, because one misplaced booty bump could have sent him flying out of the tent and into the horse pasture. 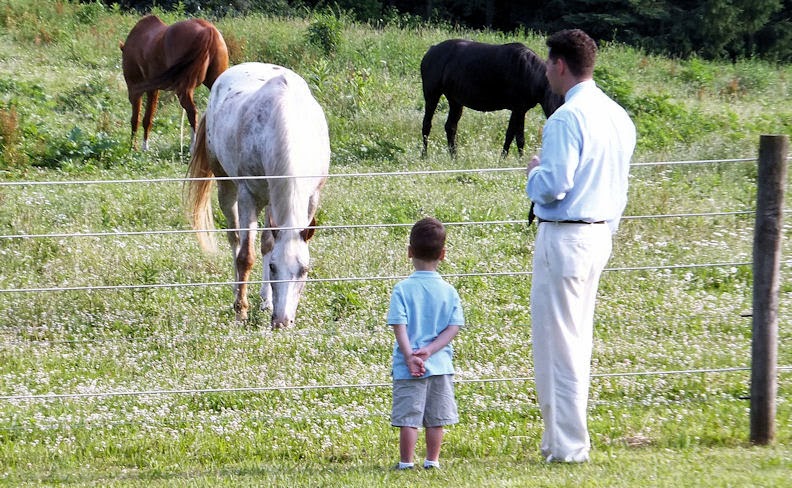 “Daddy, how did that boy fly over the fence?”

It was funny, because the whole scene reminded me of when his dad was 9, and at our cousin Denny’s wedding, he was trying to get my brother to dance with his flower girl.  My brother, speaking with more clarity and composure than your average 9-year old, said, “Denny, I’d do anything in the world for you.  But I will not dance with that girl.”

After the wedding, I met my sister and her husband for a brief “after-party” in our hotel bar, where I got to reacquaint myself with a delicacy I rarely get to enjoy: 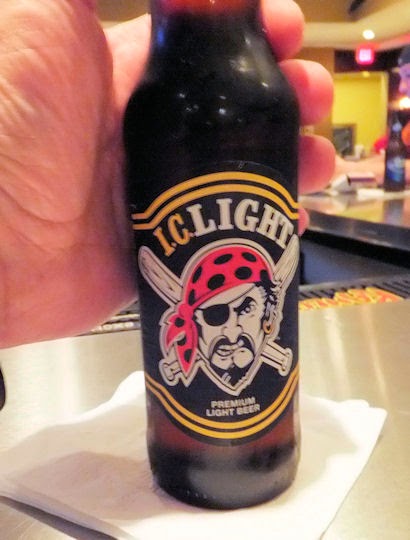 After much deliberation, my brother-in-law decided to order us some wings, which turned out to be the last batch that they had.  This proved to be a bit problematic, when the wedding party from the reception going on at the hotel, all came into the bar, smelled his wings, and wanted to order their own.

We had a couple wings left over, which my sister kept insisting that people take.  They’d be like, “No, I don’t want your food.”

And she’d go, “No, we never even touched those… you can have them.  Well except for that one because I pulled a strip off of it, but those other ones are OK.”

I don’t know if the plate got cleared by the bartender, or if my sister just snuck them on their table anyway.  I just remember that it all struck me as a very Pittsburgh kind of moment, with these wedding participants talking and carrying on with a bunch of out-of-town drunks at a hotel bar.

On Sunday, we hit the hotel breakfast buffet, hard!  Well, eventually.  My sister decided on Saturday night, that we’d all meet up in the lobby at 9:00 and go to breakfast.  So there I was at 9:00, all alone in the lobby.

After 10 minutes, I texted my brother-in-law: “Yinz comin’ dahn?”

He replied, “Were we supposed to meet you or something?  Your sister is still asleep.”

Yeah, they were pretty hammered by the end of Saturday night.  I shouldn’t have been surprised.  So I started solo, and they joined up later.  I even left them some bacon.

It was probably a mistake to have a big breakfast because the next stop was our aunt’s house, where my 98-year old grandpa lives and my folks were staying.  It didn’t really matter that we’d already eaten… more food just appeared anyway.  Granted, they had to eat too, and I obviously could have declined.  (Yeah, like that’s ever going to happen.)

Anyway, we spent the day there, shooting the breeze and watching the Pirates game on TV.  My aunt and uncle, and various cousins came and went throughout the day, so we had the chance to catch up, without the chaos of a wedding reception swirling around.

My grandpa is not what you’d call a “dog person.”  The only dogs he ever dealt with were hunting dogs, who were kept in pens out back.  But he has a dog now.  Or rather, I think the dog has him.  My aunt got a little Maltese, Samantha, who just adores Grandpa.  So now they’re inseparable.  It’s very cute to see.  I’m glad there’s someone there for him to interact with, when everyone else is busy or at work. 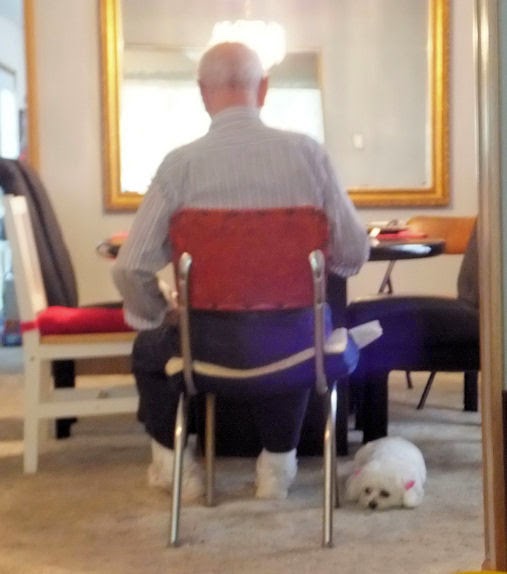 But speaking of old Italian men, while I was visiting, my dad sent this joke around, and it seems appropriate to close with.  Ahem…

A salesman drove into a small town where a circus was playing.  A sign read “Don't Miss the Amazing Italian.”  The salesman bought a ticket and sat down.

There, under the big top in the center ring was a table with three walnuts on it.  Standing next to it was an elderly man.  Suddenly, the old man dropped his pants, whipped out his huge male member and smashed all the walnuts with three mighty swings.  The crowd erupted in applause and the elderly Italian was carried off on their shoulders.

Fifteen years later, the salesman visited the same little town, found the same circus and saw the same, now faded, sign that read “Don't Miss the Amazing Italian.”  He couldn't believe the old guy was still alive, much less still doing his act, so he bought a ticket.

This time, however, instead of walnuts, three coconuts were placed on the table.  The Italian stood before them, then suddenly dropped his pants and smashed the coconuts with three swings of his amazing member.  The crowd went wild!

Flabbergasted, the salesman requested a meeting with him after the show.  "You're incredible," he told the Italian, "But I have to know something.  I saw your act fifteen years ago and you were using walnuts.  Why the switch from walnuts to coconuts?"