It was with much sadness that I read of the passing of blues guitarist Johnny Winter.  It was on his Facebook profile this morning.  (I’m fairly certain he had people who ran that for him, otherwise, there is a bigger story at hand.)

I first encountered Johnny Winter in the early 80s, shortly after I discovered Stevie Ray.  A co-worker at the record store, who was learned in the ways of the blues, told me, “If you like Stevie Ray, you’ll like Johnny Winter.”

So I bought his first album on Alligator Records, called “Guitar Slinger,” took it back to my little apartment in Bowling Green, and watched it reduce my speakers to matchsticks.  I was hooked for life. 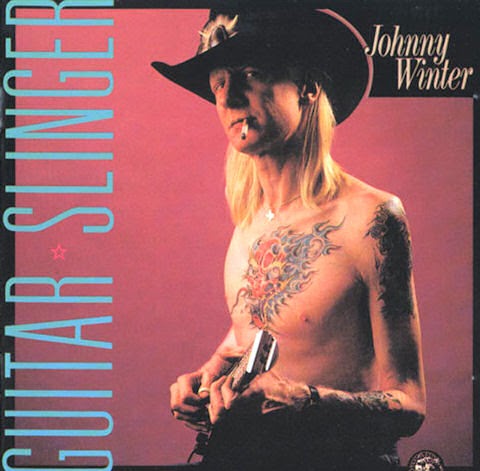 Obviously, this was one weird-looking cat.  He was a heavily tattooed, albino with terrible vision, and played a guitar that looked like it had the end cut off, but boy, could he ever wail on it.  Dude was lightning fast, all over the guitar neck.  But what always slayed me was the “yell.”

Any self-respecting bluesman has to have a good yell.  Johnny used his early and often.  It was a long, rumbly gravelly growl, that sounded like a PeeWee Herman yell.

A typical song began with a yell, then some unintelligible lyrics about how his baby done him wrong, another yell, then 72 bars of guitar solo.  In other songs, he sometimes worked with a piano player, frequently Louisiana legend, Dr. John.  They’re both on Sugaree, one of my favorites.  The piano solo comes in around the 1:00 minute mark, goes 24 bars in 30 seconds, then Johnny yells and comes in with this wicked Chuck Berry-esque solo.  Gives me chills.

Johnny could easily be labeled as misogynistic, and technically, that would be correct.  I call it an occupational hazard.  If a guy spends his life singing about how his baby done him wrong, the women are not going to come out very well.

He did one song in the mid-80s, called “Bad Girl Blues.”  It was a slow blues number using a steel guitar, about the perils of dating lesbians.  Seriously.

“You know the woman went out last night boogying
Smelling sweet like a rose.
She come home five o’clock in the morning
With that fish scent on her clothes.

These women lovin’ each other.
Y’all know they ain’t thinkin’ bout no man.
They ain’t playin’ no secrets no mo’
They playin a wiiiide open hand.”

I saw Johnny in concert twice.  The first time was in 1988, at Peabody’s Down Under in Cleveland.  He was really rockin’ that night, with a tight trio.  This clip is roughly from that era.

Back then, I knew a guy who did some backstage work at that show, and he told me how Johnny pitched a fit when he didn’t get a baked potato like he asked for.  For some reason, I found that hilarious.  I could just imagine what a Johnny Winter fit would sound like… “Ohhhhhhhhhhhhh where’s my baked potato?  Yaayaaaaaaaaaahh!”

Better yet, I could see it turning up in a song… “The Baked Potato Blues.”

“Ohhhhhhhhhhhhh, I asked my baby for a baked potato,
But mashed was what she brought.
Woman shoulda known better though,
So I shot her with my thirty-aught.
Yeaaaaaaaaaaaaaaaaahh… [72 bar guitar solo]”

The second time I saw Johnny was in 1999, here in Baltimore, and it was depressing.  It was like he was barely there.  He started by playing a 10-minute version of the blues instrumental classic “Hideaway.”  That was fine in itself; the problem was he played the exact same solo twice in a row.  The whole show he never engaged with the audience, he never moved, or yelled, or hopped around like he used to.  None of the songs had any life either; all he played were slow to mid-tempo songs.  His voice sounded thin, without the robust life he used to bring.

He just kind of stood there and swayed as he played.  At one point a guitar tech came up and took his guitar from him, while Johnny stood there.  A moment or two later, the tech came back and put a new one in his hands.

It was like he was either high on smack, or so old and decrepit he couldn’t function, other than to go through the motions of playing guitar.  I figured he had one foot in the grave, and another on a banana peel.  That was the only concert in my entire life where I left early.  Given he spent another 15 years touring after that, I can only hope that was a temporary low-point.  Like maybe he had a serious health issue that week.

Or maybe it was just Baltimore.  It’s not like he was playing Madison Square Garden.

Anyway, that’s one more bluesman down, and I’m pretty bummed about it.  At least he has one more album in the can, “Step Back,” ready for release in September.  It’s an album where he plays with a number of other guitar legends from Billy Gibbons (of ZZ Top) to Joe Perry (of Aerosmith) to Eric Clapton (of Eric Clapton).

Best wishes, Johnny.  I hope wherever you are now, they serve a nice baked potato.

Director’s DVD Commentary: When I recorded my own Johnny Winter mix tape, I called it “Baked Potato Blues: The Best of Johnny Winter.”  Who cares if no one ever got the joke but me?  Also, I just came up with that Baked Potato song verse on the drive in to the subway this morning.  With enough popular support, I won’t write any more of it.