Four Random Bits and a Story

Random Thoughts that aren’t enough to carry a post:

·       These politicians who are crying about “The War on White People” are laughable.  I read there’s a guy who claims Obama is trying to divide the nation by race.  Or in other words, doing exactly what the Republicans have been doing ever since the Civil Rights Act of 1965.  (Which was signed 49 years ago, yesterday.)  You want to mobilize white people?  Threaten them with black people.

·       Arguing that now small donations in large numbers are corrupting politics more than massive corporate donations.  I disagree.  At least with the small donations, they represent the will of large numbers of people, as opposed to the bottom line of single, profit-driven corporations.  For better or worse, that’s the way it should be.  If we want a less divisive government, we should be less divisive people.

This is me, not holding my breath.

·       Big headline on my Yahoo home page about how the Yankees were “blacklisted,” regarding being a trade partner for top stars.  Sounds juicy, no?

The article was actually about both the Red Sox and Rays had permission to trade their pitching aces to any team but the Yankees.  You know, it doesn’t constitute a “blacklist,” to not want to trade your pitching ace to a cash-laden, perpetually contending division rival, who if they retain the player, they’ll have to face him 4-5 times a year.  Complete “click-bait” article.  I hate’em.

·       English singer Marianne Faithfull recently gave an interview, in which she says her French boyfriend killed Jim Morrison, 43 years ago, by giving him some heroin that was too strong for him.

Is this really a surprise to anyone?  I mean, no one thought he died from high cholesterol, did they?

By the way, Marianne Faithfull used to be Mick Jagger’s girlfriend, back in the day.  Most people would know her now by the raspy vocal interludes she did on the Metallica song, “The Memory Remains.”  (Her voice is so roached out by decades of drug abuse and cigs, the first time I heard the song I thought it was one of the demon voices from “The Exorcist.”)

(Oh sorry… I should have said “Spoiler Alert.”)

A Story
So, at lunchtime yesterday, I walked down to Camden Yards to pick up a ticket to Saturday’s Orioles game against St. Louis.  I had already looked up 3 prospective seats online… I figured I’d try the upper deck behind home plate, in the cheap seats.  (I hope to take a nice, full-park photo I can blow up and frame.) 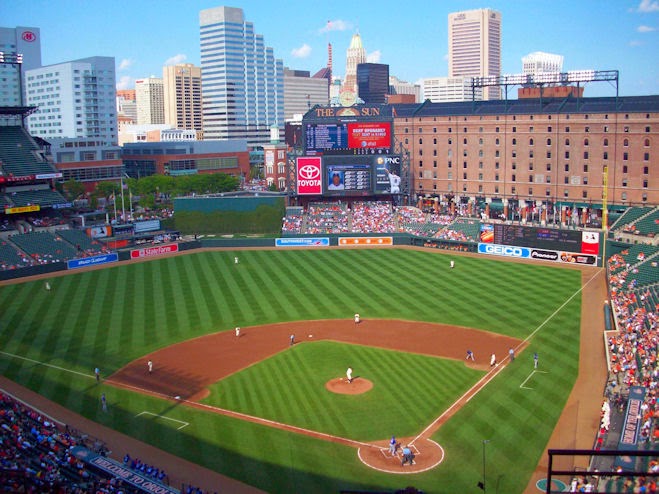 I need a shot like this one from 4 years ago, only with a good camera, to produce a larger file.

The reason I didn’t BUY the tickets online is that if you go to the ticket window, you don’t have to pay the obscene $7 per ticket processing/Ticketmaster fees.  I checked the weather before I left, and there was a strong possibility of some rain coming in.  I thought I could make it there and back before it hit, if I was quick about it.  It’s about a 15 minute walk from my office.

There were people at each ticket window but one, so I walked right up and ordered my seat.  My first choice was available.  But when she said, “$20 please,” it triggered my brain.  The website said it would be $26.  I figured I’d check my ticket when she gave it back to me.  I should have said something right away.

When I looked, the ticket was for Friday’s game.  But by then, another guy was up at the window, so I waited close by.  Soon, she asked if something was the matter.  I said she gave me the wrong day.  She said “OK, just let me just take care of this guy.”  Which she did.

Which took 8-10 freaking minutes!
Do you have this section?
No.
Do you have that section?
No, the whole lower bowl inside the infield is sold out.
How about if we break up the tickets?
No, it’s all sold out there, unless you want to pay $150.
No, I don’t want to pay that.

On and on it went.  Meanwhile, other windows are opening up, but I figure I should deal with the person who screwed up my order. (No, I absolutely didn’t say Friday.  I said, “Sund… I mean Saturday.”)  Meanwhile, the skies are getting darker and darker, in the direction in which I have to go.

Eventually, while this schmo is still pissing around with his seating, the next window over opened up, so I figured that was safe.

And it was no problem, except my seat wasn’t available for Saturday.  Before I could go to my next choice, she suggested another aisle seat, one section over.  I said that was OK, and she ran my card for an additional $6.  But then I got a brain tickle.

I asked, “That’s not a limited view seat, is it?”  I’d found one around there earlier, when I was scoping seats.  I had no idea there was an obstructed view anywhere in the upper deck.  I wonder what the obstruction is.

Right… it “didn’t come up,” but you can see it now.  Lady, you just tried to unload a crappy seat on me.

So now I’ve spent 15 minutes at the windows, while it’s already starting to drizzle, and still don’t have my seat.  They had my 2nd choice though, one section closer but of course, that’s another $12, so she had to run my card a 3rd time.  Still, at least I got out of $7 in processing fees.

But I wanted to tell her, “If I get rained on, it’s your fault.”

I didn’t say that, because she probably would have taken me seriously and I would have gotten blackballed.  Meanwhile, they just turned ME into the schmo taking all day at the ticket window.

Anyway, it only sprinkled on my walk back, so I had time to scope out a new food truck before getting back to the office.  Of course, I had to wait for 10-15 minutes there, too.

It’s no wonder I never want to leave the building.
Posted by bluzdude at 8:00 PM