I’m sure you’ve heard by now that Robin Williams died yesterday, by an apparent suicide.   I mean, everyone’s heard, right?  It’s been all over the news, the internet, all of social media.

I found out about it last night, a friend’s Facebook popup message had the news.  It’s probably not a coincidence that today has been dark and rainy; the very essence of gloom.  It’s like Nature is acknowledging that the she’s has lost one of her brightest lights.

I’m not going to run down all the amazing things he’s done.  You know them.  The guy was brilliant on TV shows, on records, in the movies, on stage.  When he wasn’t blazing like manic fire, he was acting so deeply and touchingly, it affected your soul.

As I digested the news and read the statements of grief rolling over Twitter, it made me wonder if there is a more beloved person in America.  I was overcome with a profound sadness I haven’t felt since Princess Diana died.  I know, that’s weird when it involves someone you don’t know, and who travels in circles you’ll never see.

But I feel like I grew up with this guy.  He burst onto the scene on TV, as Mork from Ork.  Yes, I watched the show every week, and loved his madcap zany.  But this was still a traditional sitcom… it was like a cross between Happy Days and Alf, on 78-speed.  He looked like a furry elf. 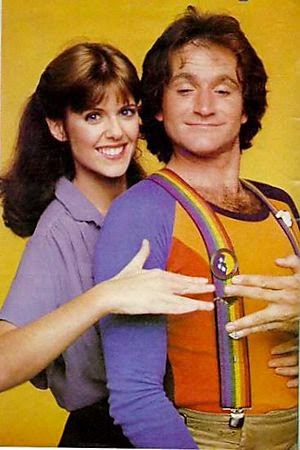 And because it was a Garry Marshall production, they had to have a catch phrase and a cloying Big Lesson at the end of every episode.  Mork’s weekly epilogue with “Orson” took care of both.

I was a junior in high school when it first came on, and sure I watched the show every week, but by then I enjoyed edgier stuff.  So when his first comedy album came out the next year, wow, it was like a comedy tornado.  The dude was just going a mile a minute with strange voices, accents, asides and tangents.
This is the whole album.  My favorite bit comes at the end.  It’s called “Welcome to my Mind.”  It’s a peek at what goes on inside a comic’s mind, when he bombs onstage.

I never really thought about it until now, but he had a big ripple effect on my group of friends.  We were doing a lot of improve comedy on cassette tapes that summer.  Now, I did “OK,” but Billy was a master of making shit up as we went along.  How could we not be affected by the boundless energy and wit of Robin Williams?

We all used to imitate bits of his act.  Bill imitated Williams doing Lawrence Welk.  Rik got some rainbow suspenders, just like he wore.  (John and I got similar ones as well.)  For a while, he made me want to be “That Guy,” who could command a room and reduce it to ashes.  After the effects of Robin Williams and Steve Martin, we were all trying to be comedians, where nothing was too weird or irreverent to goof on.

It’s sad to realize that now I’m going to have to live in a world that Robin Williams won’t be in.  It reminds me of a scene from one of the Harry Potter movies, after Ron Weasley had his first encounter with a soul-sucking “Dementor.”  His line was, “I felt like I’d never be cheerful again.”

That’s kind of how I feel right now.  So I apologize for not bringing the chuckles today.  I’m just not feeling very cheerful.  And I don’t know if listening to that album again is going to make me feel better, or worse.

Rest in peace, dude.  I hope you are finding the peace that eluded you here.

Director’s DVD Commentary: I began playing that album clip as I edited and prepared my post for the online template.  Better… it’s definitely making me feel better.  I haven’t heard this stuff in 25 years, and it’s still freakin’ funny.  I was going to give you the time where the bit I mentioned begins, but you should really listen to the whole thing.  Trust me, you’ll feel better.
Posted by bluzdude at 6:36 PM