My object, this weekend, was to continue to improve and refine my living space, which is an artsy fartsy way of saying, I needed to hang some more stuff on an open wall and clean up.

A couple weeks ago, I ordered a couple of 20 x 24 canvases of my photographs.  The first one arrived all wrong… they sent me an 8 x 10.  It reminded me of that scene in “This is Spinal Tap,” when the band ordered some 16-foot Stonehenge rocks, but when they wrote the order, the guy wrote 16” instead of 16’.  So when they were on stage, instead of a giant, impressive rock formation, these tiny little foam rocks were lowered down, dancing on the end of the wire. 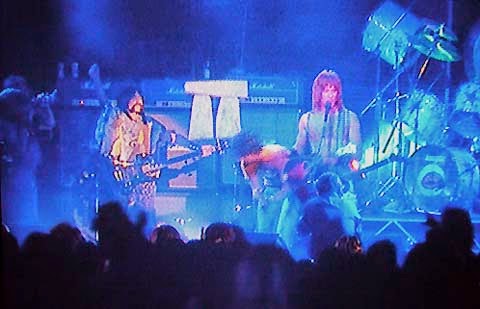 The second canvas was fine, so I had to call in to the help desk and get them to fix it.  “No,” I explained, “I did not order the 8x 10; because I went back and forth a number of times, it did revert to the 8 x 10 default, but I noticed it and backed up to revise, before finalizing the order.”

I don’t know that they believed me, (it was true), but they made good and sent me the proper sized canvas.  The whole thing took an extra week though, so I had the one canvas sitting around here for a while.  I didn’t want to hang one without the other, because they were to go together.  Anyway, it worked out eventually, and I got them hung up. 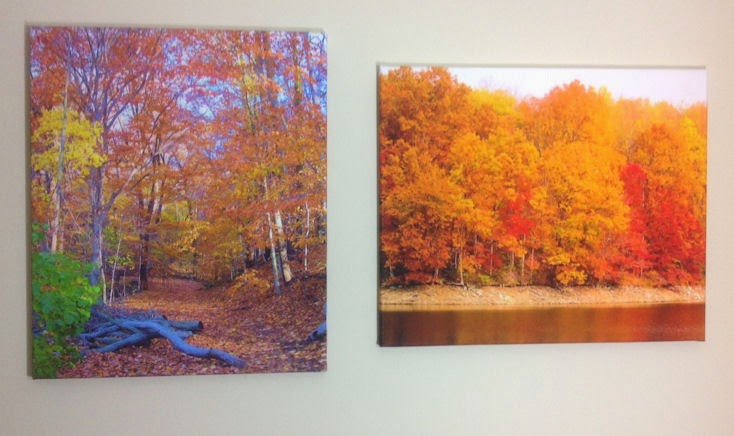 Before that, though, I had errands to run and a movie to see.  (“Lucy.”  It was OK.  The trailer showed all the best parts.  Scarlett Johanssen is gorgeous though.)  On the way back, I stopped at the store, and among my quarry was a new Swiffer.

I’ll be the first to admit; I’m pretty “cleaning challenged.”  There have been some Swiffers around the place before, but I wasn’t the one using them.  But it looked like a good alternative to a broom, or grungy old mop.  And if the cleaning can be made simple, I’m much more likely to do it.

It’s not that I slop up the kitchen floor; it’s more an issue of lint from the dryer and hair.  (I shed like a Persian cat.)  Now with my nifty new system (I got both wet and dry cleaning thingys), I can safely say that I’ll clean the kitchen floor every three or four months, whether it needs it or not.

When I got home from my errands, I walked into a kitchen surprise. 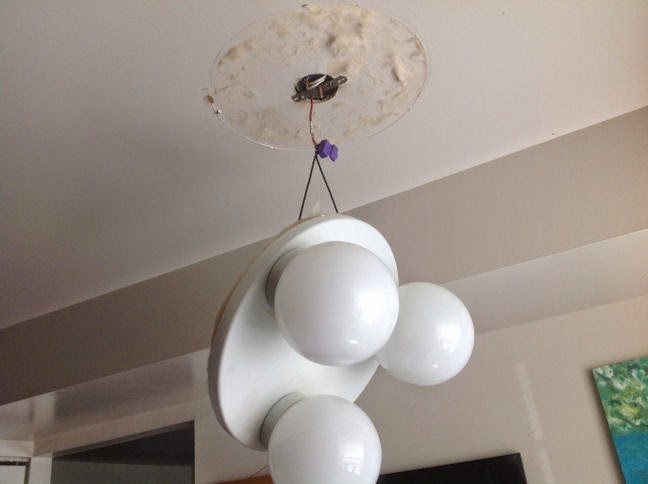 Now I KNOW it wasn’t like that when I left.  Was it the work of ghosts?

No.  The apartment above me has recently been vacated.  I think it was the result of all the pounding the maintenance guys have been doing up there, installing new carpet and whatnot.

So, I called the maintenance department and reluctantly had them send someone out.  If all the wires had still been connected, I probably could have put it back together myself.  But I’m no electrician and had no intention of electrocuting myself when I could have someone else do it for free.  (Fix the light, not electrocute himself.)  I hated to call them out on a weekend, when they’re supposed to be off, but I didn’t want that thing to fall, and have them be like, “Why the hell didn’t you call us?”

So, an hour and a half later, the guy shows up and starts working on the light.  I left the room to give him some space.  Then the next thing I know… SMASH!

I thought, “Shit, I could have done that my own self.”

So I went into the kitchen and handed him my broom and dust pan.  You broke it, you bought it. 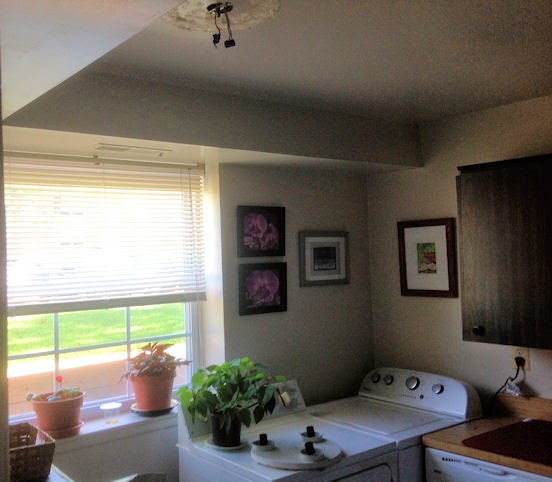 I stealth-shot this while he was out in the truck.

After he cleaned up, he went out and got some more light bulbs and glass covers for them, and got everything working again.

After he left, I put some hard-soled slippers on and went to check the floor.  As I suspected, he got all the big pieces, but there were still a lot of glass slivers on the floor.  I must have been prescient when I got the urge to buy a Swiffer.  It came in right handy, with both the wet and dry attachments.

I got so worked up, I used it on the bathrooms too.  Then I got out my new Swiffer hand-duster, and dusted the whole place.  That’s my M.O.  I rarely do “cleaning things,” but once I start, I get on a roll.  So now, this ought to hold me until at least December.

Lucky for me, I can still count on my family to keep me amused in the face of tragedy.  My dad sent this out on Friday, and it still makes me laugh.  The message said, “I just found the cause of my recent bout of clumsiness.”

This was the picture: 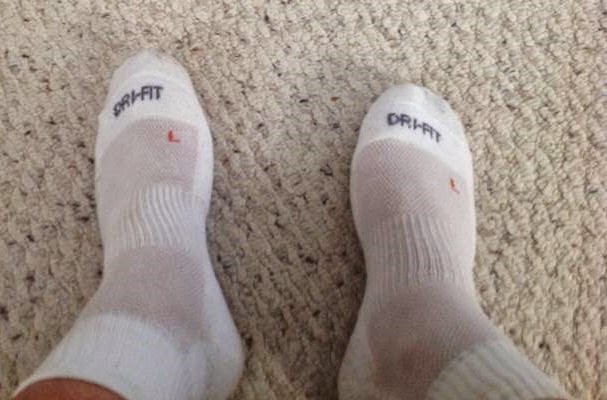 And I know that’s not an email forward, because I recognize the carpet.

Later on, Dad sent out a message to the family to celebrate the (long overdue) purchase of his first hearing aid.  To which someone else wrote:

“Just watch out when your wife fires up the microwave.  When mine does it and I have my hearing aid in, I start spinning around and pee my pants.”

What would I do without family?
Posted by bluzdude at 12:06 PM