Whatever Happened to the Show Me State?

I honestly wasn’t going to write about this because I didn’t have much to say, but at this point, it’s become such a CF I no longer have a choice.

Ferguson.  Everyone’s talking about it, yet nobody knows jack-shit.  Call it a microcosm of modern news media.  Cops shoot people every day.  So why did this one blow up into a national headline?  I’ll tell you why: witnesses and social media.

I read about police shootings all the time, either in the local paper when is happens around here, or online when it happens in other communities.  But in most cases, there are no eyewitnesses except maybe other cops.

In this case, from my understanding, there is the guy who was with the kid who got shot, Michael Brown, and someone else who saw the altercation from her car.  Next thing you know, the local news is talking to them about how Brown had his hands up, surrendering, and the story ends up online, and gets passed around the neighborhood and around the country in moments.

Social media makes it easy to mobilize large numbers of people in a short amount of time, so now you have a protest.  And once there’s a protest, people take advantage of the distractions and go on a rampage.  And when all that is going on, the news media swarm to the area to get pictures, because that film is going to make a huge impact. 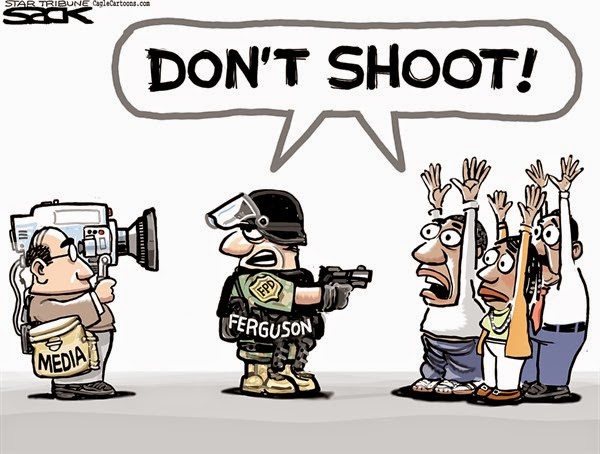 Once the cameras are rolling, out come the fame whores who feel the need to become involved with every incident that comes to the country’s attention.  Then everybody else goes on TV to try to spin the story to their advantage.  Poor downtrodden victims versus jackbooted redneck cops.  Officers of the Law versus rampaging thugs and looters.  And so it goes.

So how do you get justice when no one knows what happened?  That’s what everyone is talking about, right?  Justice?

Sure, everyone wants justice.  But what no one wants is to wait for it.  We’re an immediate gratification country.  We want the case wrapped up and the killer brought to justice in an hour, just like we see on Law and Order.

Maybe the critics were right when they said we shouldn’t spend so much time in front of the TV.

As you know, I’m usually a reliable advocate for the left.  But with this story, I’m finding bullshit everywhere.

For example, I saw a tweet making an issue out of an (undocumented) factoid that blacks were arrested in Ferguson at a much higher rate than whites.  On the surface, that gives one pause, but when you consider that the population of Ferguson is overwhelmingly black, what else would you expect?  For the arrest rates to come out even, the police would have to actively seek out and arrest white people with little regard to what they were doing.  That’s just basic math. But it sure looks good on Twitter…

When the police released the pictures and video of the kid “strong-arm robbing” a convenience store, the townsfolk decried it as character assassination.  Sure, it might not have been necessary to do, but how can it be character assassination to show what someone really did?  No one was saying it wasn’t him.  They’re upset because it makes him look like a punk.

Granted, the sentence for stealing a box of cigars should not be the death penalty.  And the fact that the officer fired six shots in the space of a second or two tells you that he was trained to shoot to kill first, and ask questions later.  But like I said, we don’t know what the kid was doing. 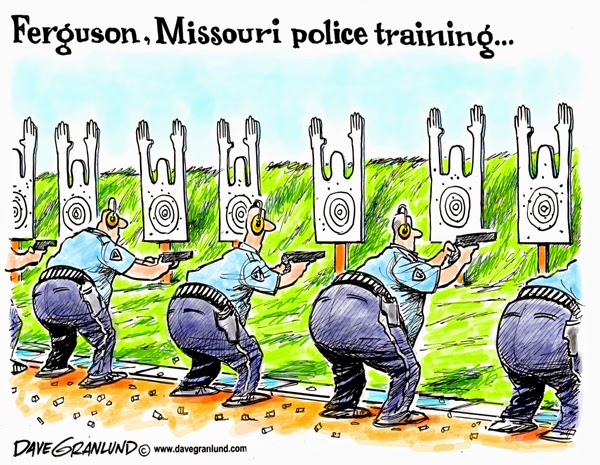 I think the root of the problem is that you have a town that’s predominantly black, and a police force that’s predominantly white.  When you have those two factions clash, there’s bound to be sparks.  Add the tinder of an unarmed kid, social and mass media, and our country’s “fix it now” attitude, and you have the bonfire we’re roasting our weenies on right now.

Until that imbalance is fixed, in Ferguson and in hundreds of other towns across the country, we’re going to see this again and again.  Maybe one day we’ll learn. 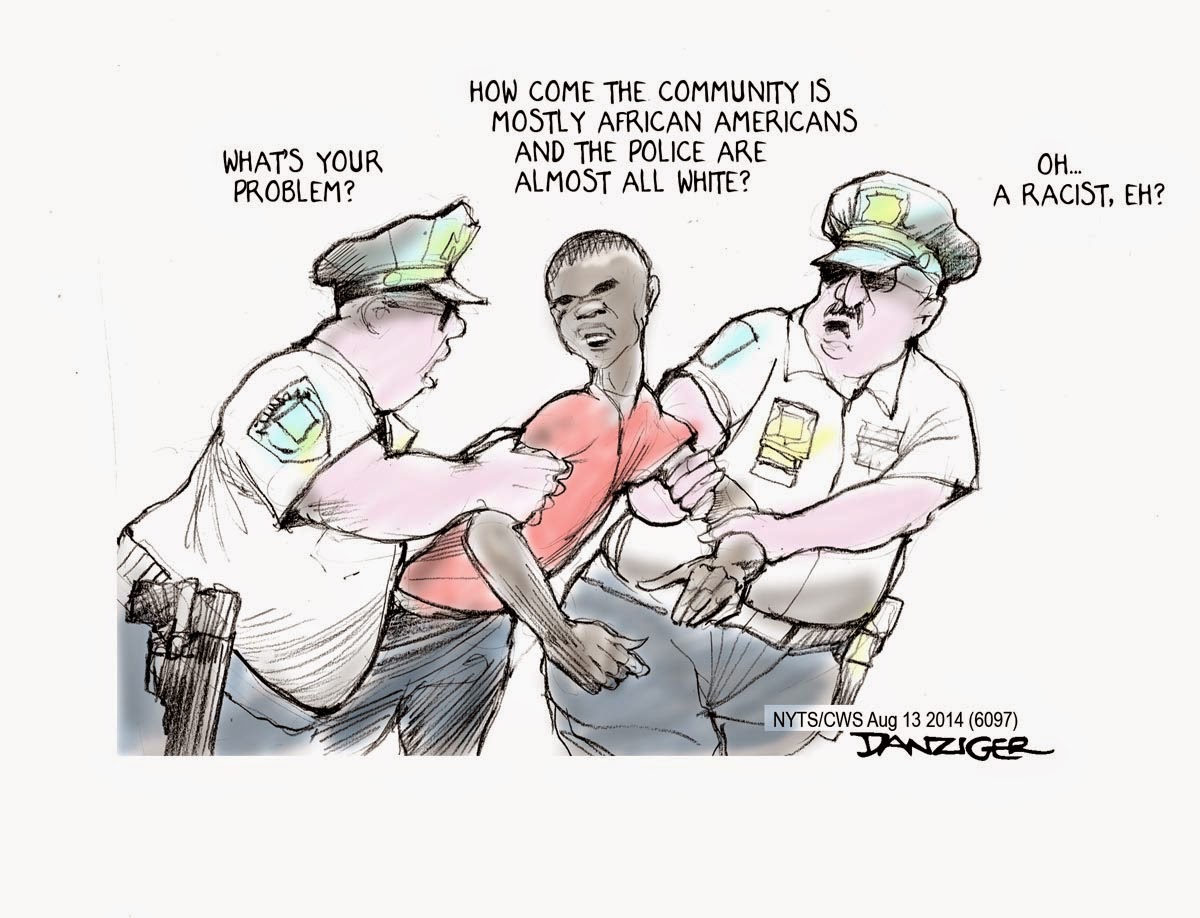 In the meantime, (and it pains me no end to have to say this), we should listen to Chris Christie.  He said "None of us quite know yet exactly what happened in Ferguson."  I've been urging people to not pre-judge anything here."

And with that, Christie should shut his cake-hole and go back to mismanaging his own state.  It’s not his business what happens in Missouri.  I’m sure he wouldn’t appreciate the governor of Missouri commenting on the state of New Jersey.

That’s the same reason I think Al Sharpton was wrong, when he criticized Christie for partying while this crisis is playing out.  This isn’t Christie’s dance, and he has no role in it.  So who gives a hoot what he’s doing?  That’s a matter for the citizens of New Jersey.

Reverend Al should turn is attention to the idiots on Fox "News," whose company line seems to be, “He had it coming.  Law and Order. And it’s Obama’s fault.”

I’d like to see the reaction from Fox News if the crowd of protesters were armed as well as, say, those attending an average Georgia Tea Party rally.  Conservatives are all for people carrying guns, as long as those people are white people.  Arm a crowd of black people and they’ll be calling for the National Guard.

So how about we all climb down off our soap boxes, turn off the TV lights, and wait for the wheels of justice to turn.  There will be an investigation, an indictment and a trial.  Let’s see what happens before we erupt in righteous anger.

And in the meantime, maybe try to fix a few long-term problems, so we don’t keep repeating these short term ones.
Posted by bluzdude at 7:32 PM

Cal Thomas, whom I never read much less quote, makes an interesting comparison between Ferguson, Mo. and the Theater of the Absurd. "...'disjointed, repetitious and meaningless dialogue, purposeless and confusing situations, and plots that lack realistic or logical development.'"
So tv becomes Theater.

I agree with you that that one of the root problems is "that you have a town that’s predominantly black, and a police force that’s predominantly white." But there is the broader, historic problem of racism that permeates all parts of our culture and society. I also think that the Ferguson community saw what happened with Trayvon Martin (the parallel is there even if the facts are different) and wanted to make sure everyone knew about it so it could not be covered up. As usual your analysis is well reasoned and measured. I've stopped watching all TV news because of the circus that surrounds any major news story and all of the offshoot stories that evolve and devolve from the main story. For example, critics challenge the President's response and his failure to go to Ferguson and to send AG Holder instead. That becomes another story to cover. Then there are the 15 minutes of fame folks vouching for the police officer's character or unearthing the police officer's mother's background. I feel terrible for Michael Brown's family and I feel terrible for the police officer. He made a decision that will forever change the trajectory of two families' lives. But we don't know what led him to that decision and I am hopeful that there will be a comprehensive review of the underlying time line and facts so that we do find out what the "truth" is. I also commend the captain of the Missouri Highway Patrol who appears to be a really decent human being.

Cal needs to remember that these are people, not plots.

The Highway Patrolman has done an outstanding job, even though I'm sure the governor and his people were like, "We gotta get a black guy in uniform out there, STAT." If only there were a couple hundred more like him on the job there.