I had to go to the DMV on Saturday, to renew my driver’s license.  The last time I did so, I blogged about it.  I didn’t have to go to the same place this time; I found one about 10 minutes from my place.  I think it’s new.

What was also new was the wait time.  Their website said Saturdays were busy, but still, it was better than taking time off work to handle such a mundane chore.  Anyway, I rolled in just before 10:00 AM.  I brought the paper with me, figuring I could stay occupied with the crossword puzzle for a while.

Cut to 40 minutes later, having solved the crossword, the Jumble and Sudoku, and immediately find myself bored senseless.  I had considered bringing my iPad with me, and I really wish I would have, because as it turned out, they offered free wi-fi. 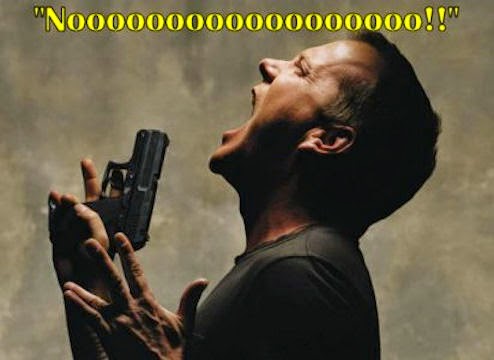 I was starting to get antsy, because I hadn’t heard anyone with my range of numbers get called.  Eventually, I reseated myself on the other end of the room, and found that I still had a ways to go.

Finally, after almost two hours, they called me up to the counter.

For the most part, getting a license renewed in Maryland is uneventful.  In fact, I could have done it by mail, or online, but if you’re over 40, you have to take a vision test.  In the renewal notification, they provide a form to take for your eye doctor to complete, and then you send it in to the DMV.  I figured, one hassle is as good as another, so I’d just go straight in and get my license directly.

And I came thiiiiiiiis close to bombing the freakin’ vision test.

It’s not that my corrected vision is bad; it’s that as you may recall, my contact lenses are proscribed so my left eye is for close-up reading, and my right is for distance.  So when I looked into the little ViewMaster thingy, there were three rectangular boxes, each with letters in them.  Both eyes could see the box in the middle, and the boxes on either side were only visible to the eye on that side.  I could see two of the boxes perfectly, but the one on the left, I had no freakin’ idea.

It was just like this, only with different letters and was less hand-drawn.

In a panic, I looked up and pleaded my case with the clerk, but to no avail.  She just gave me a look like, “You better guess well, homeboy, or you’re going to be walking for a while.”

If only I’d have been sitting closer to the counters, maybe I could have used my Dad’s old trick of listening to the people in front of you taking the test, and just repeating it back.

I gave it another shot, and if I kind of squinted and concentrated, I could just about make something out, so I took a stab at all three boxes.

When I looked up, the clerk was surprised.  She said, “I think you might have had it.  Can you do it again?”

I was like, “How about we just stick with the part where I got it right, so I can get the hell out of here?”

Well, to myself, I said that.

I looked in again, squinted, maneuvered and blinked my contact into the best view I could manage, and reeled off the letters a second time.

She said, “You only missed two of them; one in the right box, and one in the left.”

I said, “Oh, that one on the right that must have been an O instead of the D.  Those are tricky.”

I passed, but who knew they graded vision tests on a curve?

There was also the issue of getting a new picture taken.  I never know how to pose for license shots.  I didn’t want it to look like a mug shot, so I settled on an expression of slight bemusement.

Unfortunately, it occurred to me after the fact that I should get my license picture taken looking like I was drunk.  Then if I ever get picked up for DWI, I can claim that’s how I always look.

If I had known about how they do the test this time, I would have worn one of my old left-eye contacts that were made for distance.  But in six years, it’s unlikely I’ll still have any of the old prescription lenses lying around.  Of course by then, I’ll probably have a decent set of glasses, and I could use those.

Either way, I’ll have to remember to take steps to remedy the situation.  But what are the odds of me remembering?  Well, without writing it down, zero.  So I figured I’d write myself a note.  But where to put it?  Post-It Note?  Scrap paper taped to the wall, or on a bulletin board?  No way can I trust it to stay put for six years.

And that’s how I came to write a self-reminder note on a searchable electronic medium, to be shared by the world.  Now don’t let me forget…
Posted by bluzdude at 6:22 PM