I trust everyone had nice Christmas?  I hope so.  And I hope no one got bit by the nasty weather that screwed up so many travel plans.  It was definitely a good Christmas to stay close to home, at least on the east coast.
We were supposed to be socked with a major snowstorm yesterday, but it pretty much skirted around Baltimore.  We got an inch or two, but nothing like some of the places north of us.  OK, so much for the weather report.
Pinky and I had a nice, peaceful Christmas morning.  I wouldn’t say she kept coming into the bedroom to wake me up for presents, but after the 5th or 6th trip in to ask me about how she should make the gingerbread, I took the hint and got up.
We ate gingerbread and opened presents in front of the fireplace they broadcast on TV. 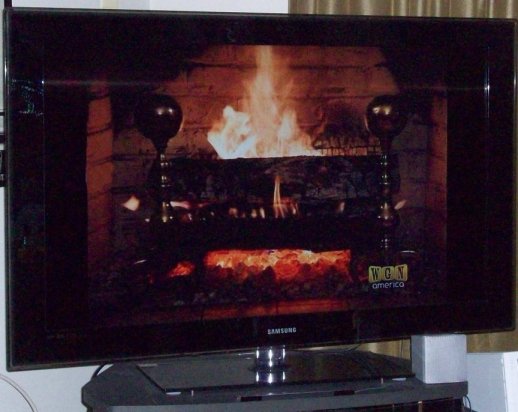 We apartment dwellers have to make do.
The present from Bluz Sister knocked me out… alumni sweatpants and a tee shirt from my high school.  I supposed if I still lived in NW Ohio, it wouldn’t be such a big deal and I could find this sort of thing locally.  Not that I’ve ever seen anything when I’ve visited. 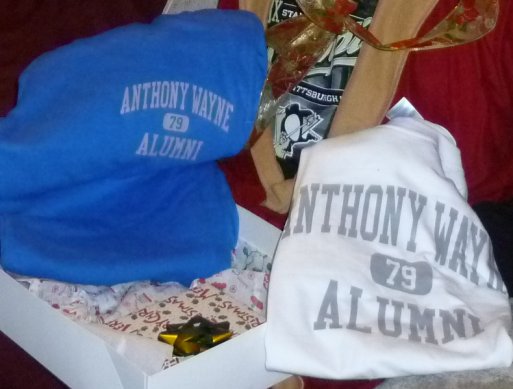 Pinky gave me over 30 hours of belly laughs by getting me 2 seasons worth of "30 Rock" on DVD.  Plus, I get to look at the yumminess and wit that is Tina Fey. 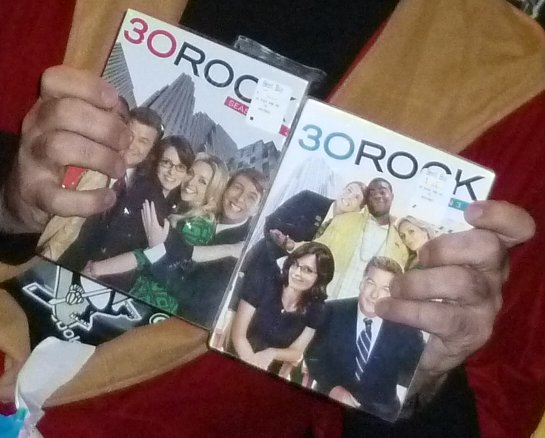 So later, I went to my brother’s house for Christmas dinner.  Seems that the boys (Sammy, 5 and Daniel, 11) got an air hockey game for Christmas.  So I spent most of the day downstairs with them, working on my air hockey game.
Sammy was actually pretty good.  Not that I let him beat me, or anything.  If you’ll recall, I posted earlier this year on how I don’t believe in “letting” kids win.  Not that I played all out or anything, but I didn’t roll over. 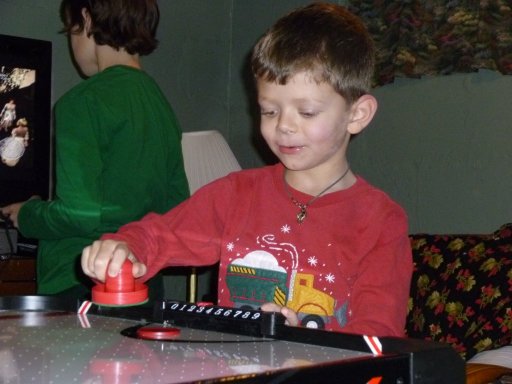 Sammy, defending his goal.
You have to watch kids though… they totally cheat.  Sam’s favorite ploy was to dip his elbow onto the table, so his sleeve or arm blocked any shot to his right.  I do allow, however, for the fact that the table is up much higher on him than on the rest of us.  (Even when I played sitting down.)
More egregious was that whenever he started losing, he’d come around the table and reset the electronic scoreboard back to zero-zero.  Little sneak…  But let me tell you this; 5-year old Sammy would have kicked MY 5-year old ass, no question.  He’s have had my lunch money, easy.
He had the line of the night too:  “I’m gonna beat you like a piece of chicken.”
I have no idea where that came from.  Kids are weird.
On my part, I was talking shit from the moment we started.  I told them I used to hustle air hockey games to earn extra money for snacks and soda.  I said I worked my way through school that way.  I completely expected them to call “Shenanigans” on that, but the both of them bought it without question.
“You mean you used to win money at this??  Cool!”
I’m going to hell… I know.
They even told their daddy, when he came down after dinner to have a go.
“Uncle Bluz used to hustle games when he was in school.”
If Ed realized what they were talking about, he didn’t let on.  Probably just wondered what the hell they were talking about.
The funny thing is that Sammy cleaned house.  He beat his older brother 2 games to 1, fair and square.  (After a couple score resets, of course.) 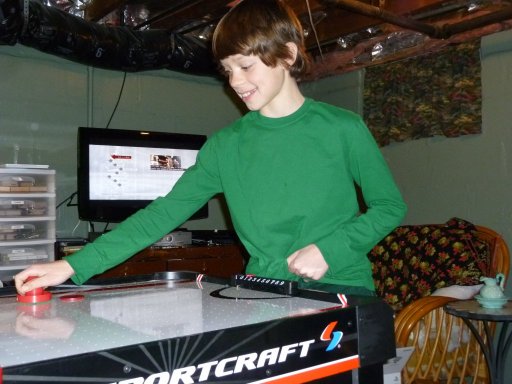 Daniel, who would have rather been over there playing with his PS3.
Then Sam beat his Daddy.  I don’t think Ed will hear the end of that one any time soon.  Knowing Sam, he’ll probably refuse to play again and trash talk on his victory for the next year.
Naaah.  Sam’s a gamer.  I bet they’ve played a dozen more times since then.
Once we resurfaced for deserts, we did our own gift exchange.  I was delighted with mine… it was Daniel’s suggestion… he saw them in Target and told his mom that they’d be perfect for his Uncle Bluz. 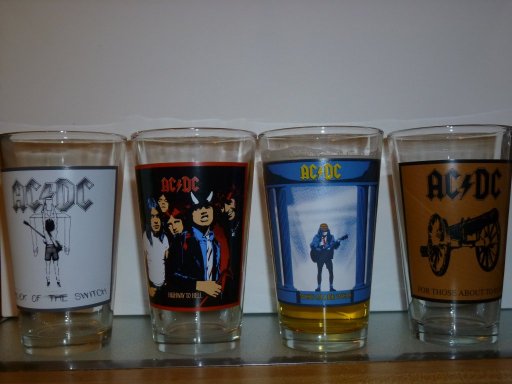 Well chosen, son, well chosen.
As you can see, I christened the Who Made Who glass once I got home.
Sunday was just a veg day.  Pinky had to work and would stay at her place afterward, so I just puttered around and watched football all afternoon and the Penguins in the evening.  With the snow coming and wind howling, it was a good night to be tucked inside.
I’m off this week until Friday, so this morning I got up to see that all the hype about the storm was nothing but another false alarm.  Pinky rolled in around noon and set out to make some spaghetti. 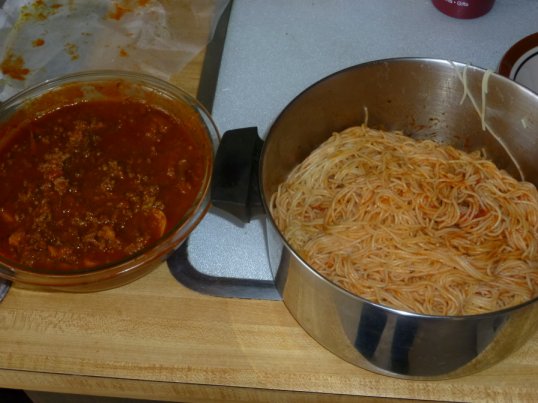