Yep, I was right… coming back to a 5-day work week sucks.  At least I seem to have kicked my cold.  I’ve been off the cold medicine since, Thursday night, so I’m not seeing vapor trails any more.  But here are some things that I have seen…

I’m French; Why Do You Think We’re Having This Outrrrrageous Parade?
OK, everyone’s seen all the stuff going on in France, with the magazine shootings.  Truly a tragedy, no question.  Over the weekend, they had the big peace march, with featured a number of world leaders.

One world leader who wasn’t there was President Obama, which of course, sent Fox “News” into a lather, claiming in one full-fanged piece of overstatement, “President Obama chose the side of the terrorists.”  Another one of their hacks claimed, “Obama’s message to America and its allies is that we don’t care.”

Right.  Naturally, this is despite France’s statement that the President was one of the first callers to the French government, to offer his condolences and offer assistance.

I have no question at all that if the President HAD gone to France to march in the streets, Fox would be hollering that he should be back home, working on passing the GOP Keystone pipe dream project, or some other trumped up emergency.

Obviously, an American President out marching around within a crowd of a million people is a huge risk, and not a scenario in which the Secret Service can easily protect him.  In fact, that’s probably why Fox wanted him to go in the first place… to facilitate assassination.  Then they’d only have to deal with a run-of-the-mill white commie, rather than a foreign-sounding dark one.

And since when does Fox care anything more about France a than how to use them as a punch line?

Personally, I think I could solve the whole French-Muslim problem with one move.  I’d just send this guy to the Middle East and let him do his worst: 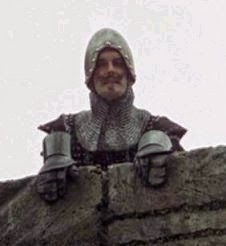 “Your mother was a hamster, and your father smelt of hummus!”

Birmingham Bluz
As someone who was once versed in journalism, I have to stand in awe of the degree to which Fox “News” just makes shit up.  They became the laughing stock of British twitterers the other day, after one of their terrorism commentators asserted that Birmingham (England) was a “Muslim-only” city and that “non-Muslims don’t dare go there,” because “Muslim police” beat “anyone who doesn’t dress in… religious Muslim attire.”

Naturally, this came as quite a surprise to the 70% of Birminghamites, who are non-Muslim.  As word of this new census interpretation spread, the Brits took to Twitter to excoriate the idiot.  This was my favorite one:

Once again, a Fox “News” talking head just throws this information out there that is blatantly untrue, and doesn’t think twice about it until he’s called on it by the masses.

I have a rule of thumb; I don’t believe anything I hear on Fox, ever.  Not even football scores.  You just know they’ve inflated the score of the team on the right.

Ratbird Down
Big football weekend, that was, with four Divisional Playoff games on tap.  I actually went out to my sports bar to watch the Ratbirds/Patriots game.  I didn’t have to take too much grief following the Steelers loss, but I did buy a couple of drinks for one of my regular (and very cute) rivals.

The game itself was a wildly entertaining affair, with the Ratties going up by 14 on two occasions, and subsequently losing the lead both times.  Pretty-boy Tom Brady ultimately outplayed Joe Flacco, carved up the Rats’ secondary and led his team to a huge win.

It’s hard to follow the intricacies of the game when watching in a bar, so it wasn’t until the next day that I knew about some game controversy.  It seems the Ravens’ coach, John Harbaugh, was complaining about some 4-lineman formations the Pats were using, and that they were making certain players eligible or ineligible (to receive a pass.)  This confused the Ratties and led to some clutch completions for the Patties.

Although the NFL review concluded that there was nothing illegal about the formations, Coach Harbaugh non-the-less complained about their tactics.

"Because what they were doing was they would announce the eligible player and then Tom would take them to the line right away and snap the ball before we had a chance to even figure out who was lined up where. And that was the deception part of it, it was clearly deceptions.”

Wow Coach, so those cheating Patriots are trying to deceive you, huh?  Just like every other offensive movement and formation across the history of the NFL?  I bet the first coach that ever saw a team shift out of the single-wing formation cried to the refs too.

Apparently Harbaugh went to the officials and requested a do-over, on account of “we weren’t ready.”  Unfortunately for him, Coach Belichick effectively countered his request by claiming there were “no take-backs.”

Tom Brady had the best word on it.  He said, “I don't know what's deceiving about that…  Those guys gotta study the rule book and figure it out." We obviously knew what we were doing and made some pretty important plays.”

Too Bad He Didn’t Play for the Angels
I know people take their sports heroes seriously, but this headline made me double-clutch.

Roberto was an All-Star right fielder for the Pittsburgh Pirates, who died in 1972 in a small plane crash, while taking supplies to earthquake-stricken Nicaragua.  He was my favorite player, as a boy, and my brother’s as well. 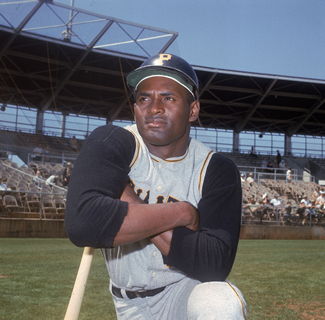 Anyway, this huckster pastor in Pittsburgh recently hit up the Vatican to try to elevate “The Great One” to sainthood.  The Vatican directed him to take it up with the archbishop of San Juan, PR.

I just wonder what three miracles he was going to claim.  I could come up with a couple, but I’m not sure they’d hold up under church scrutiny.

* His rifle-shot throw to third in the 1971 World Series, which also uncovered the 3rd-base ump (who called the runner safe), as a minion of Satan.

* He made an entire airplane (as well as himself) disappear.

While I admire this guy’s efforts, he probably ought to stick to trying to get Clemente’s #21 retired throughout the major leagues.  If there’s anything more convoluted than MLB’s decision-making process, it’s the Vatican’s.

My favorite part of the article came in the comments, where one guy wrote: “I’m Jewish, but would love for my kids to attend St. Roberto of the 5 Tools.”

Arriba!
Posted by bluzdude at 6:10 PM

[I swear I wrote a comment before, but I cannot remember if I never finished it and closed my browser, or if you just had not published it yet. If the latter, sorry for the repeat and the longer comment.]

I had not considered the protection the President would need during that march, but I am not sure how I feel about something like that in general. Maybe I am being cold-hearted, but can and should the Prez go to things like that? Regardless, I suspect you are right, that if the Prez had gone to Paris, the right would have had something to say. Now, I hear the right yammering about the prez and his vacations. Years ago it was the left kvetching about Bush and his time off. I stopped watching CNN and Fox years ago. I am much happier now.

That sainthood thing was funny, and got some traction up here. I think your miracles just might get him in.

I did not watch any of the games, but I will say I was kind of glad Dallas got knocked out, based on my limited knowledge of some controversy that happened in their game a week before. I am pretty sure Detroit is happy. As for the NE-Ratbirds, I was hoping for quadruple or endless OT (I forget how OT works in the playoffs). Oh, well.

Ugh. I can't even read the name Gareth without thinking of cannibals now, thanks to The Walking Dead.What a horrible name.

While I would have loved to have seen Obama march, I understand his reasonings as to why not. Fox news isn't news, as we all know, and no matter what he does, he's an illegal alien who has no business being prez.

Nope, this was the only comment of yours I saw...

With all the heads of state that did show up, I guess we should have sent someone... Maybe John Kerry? Or even better, Tea Leoni!

Now, I'm rooting for the Packers, and anyone who plays the Patriots.

That the twitterer's name was Gareth never even occurred to me. I was just looking at the content.

That's the way it's gone for the last 6 years... whatever the guy has done, the GOP cries that he should have done the opposite, even if it's something they've supported in the past. Very sad face.