My last Facebook status: “Look out 2010, the last man on earth without one finally got a smart phone.  Commence vast learning curve.”

Yep, on Monday I ordered myself an iPhone 6 and it was delivered Wednesday night. 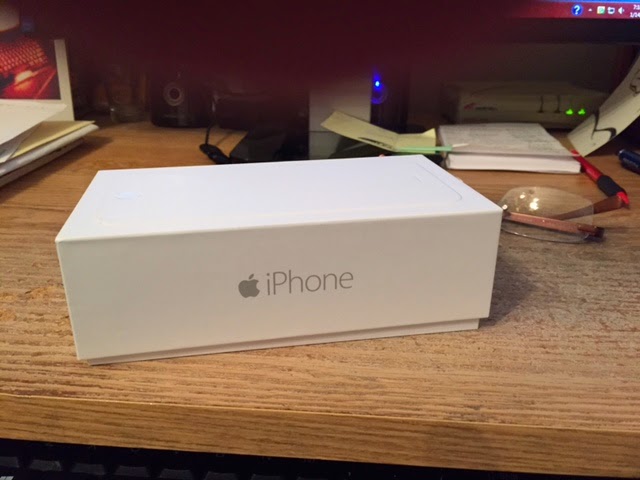 I decided to go with the iPhone (rather than an Android or anything else) because I already had an iPad, and figured the two would play nicely together.  It helps to only have to learn one operating system.

The catalyst of this whole thing was the fact that my office is moving to a different part of downtown Baltimore this year.  The move will increase my daily walk from subway to office by half.  It currently takes me 5 minutes each way, and now it will take 10.

It’s not a huge distance by any means, but when it’s 20 degrees out, or pouring down rain, every little bit counts.  But what does that have to do with getting a smart phone?

Well, there’s a free bus system called the Charm City Circulator.  One of the routes runs right along the way that I’ll be walking.  They also have an app, which will tell me how long it will take before the bus hits a particular stop.  I figure that’s something I’ll need.

When I pop up out of the subway, it will be decision time.  If there’s a bus coming shortly, I can wait for it. But if it’s still 10 minutes away, I might as well walk.  So I’ll need to know the difference.

Yeah, saving a 10 minute walk… that’s why I finally bought an iPhone.

Also, watching my brother use the Google Maps app in the car, and various other doohickeys while we were going to Pittsburgh and back two weeks ago; that gave me a prod as well.  Plus, it’s about time I come in out of the darkness and start to use this new technology.

The kicker was finding a cell service with an appropriate deal.  I saw that my current vendor was offering a no-limit talk/text/data plan for $50 a month.  My current cell plan ran about $35 a month as it was, so the difference (once I pay off the phone) will be small.  The high price of data plans was a huge deterrent for me before.

Obviously, I’m not one of those “early adopters.”  I’m more like “the last adopter,” meaning as soon as I adopt the technology, the powers that be will release a brand new item that will surpass and replace the thing I just adopted.  I’m assuming that this is when Google Glass makes the leap to become the dominant media tech.

And the funny thing is, every time I learn some new trick or find a cool gadget, I can’t really tell anyone about it because they’ll be like, “Meh, I had that two years ago…”

Right off the bat, I’m stuffing my iPhone with all the apps I currently have on my iPad.  And I love how my contacts and Google Chrome bookmarks all transferred over instantly.  Also, I’m rolling through Amazon and ordering all the accessories I’ll need… a cover, stylus, extra chargers, a car clip, and whatnot.

While I was working on it last night, I got an instant message from blog sister Cassie, which was nice.  I noted that not only was she the first non-family member to comment on my blog, she’s now the first person to send me a message on the new phone.  Always the trailblazer, she is.

But as Spiderman’s Uncle Ben said, with this new power comes great responsibility.  I refuse to become one of those people who can’t put their phones down.  My phone is going to serve me, not the other way around.

I still plan on reading my real newspaper on the subway on the way to work, and my paper Sports Illustrated on the way home.  Of course, now I can play my bubble game on the phone when I’m coming home late from an Orioles game, with nothing to read.

Now I can load the Frequent Visitor app from my local sports bar, so I don’t have to schlepp my iPad with me anymore.  And I can bag my old GPS, in favor of Google Maps, which along with the route, will spot and avoid traffic jams for me.

I still probably won’t have my iPhone on when I’m at home, because I’m keeping my land line, and I already have a PC and iPad for web stuff.

It occurred to me that I should come up with some kind of smart phone pledge.  If I make a public declaration, you can help keep me honest if you see me veering into iPhone Co-Dependency territory.

The Darwinfish2 Smart Phone Pledge
As the new owner of a fancy-pantsy smart phone, I do solemnly swear that I will avoid ignorant, rude and anti-social behavior, including but not limited to:

In the name of Steve Jobs, I swear to avoid these and any other transgressions of smart phone obliviousness.   Bluz Dude

Now, who’s got some apps that I need?
Posted by bluzdude at 6:38 PM

Email ThisBlogThis!Share to TwitterShare to FacebookShare to Pinterest
Labels: Bluz LIfe, Things That Piss Me Off