2015 kicked off for me in amazing fashion, as I got to go to a couple of sporting events and hang out with two of my favorite people, in my favorite town.  As I mentioned in the last post, I had plans to see both the Steelers and Penguins play in Pittsburgh, with my brother Ed and nephew Daniel.

To get an early jump on the festivities, I went to Ed’s house on New Year’s Day, to watch some hot Bowl Game action.  In particular, Ohio State’s upset win over Alabama set a positive tone for the new year.  I spent the night there, so we could leave for Pittsburgh first thing the next morning. 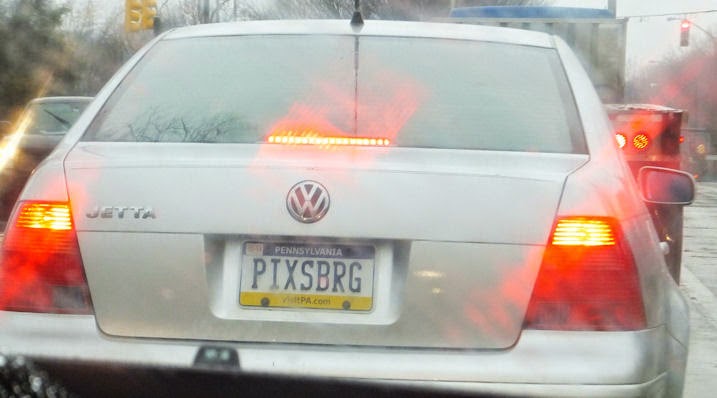 Kudos for claiming this plate down at the DMV.  You win Yinzer of the Year!

We got into town easily, and after checking in at the Doubletree, we took a walk down to Market Square, to take in some monster Primanti’s sandwiches. 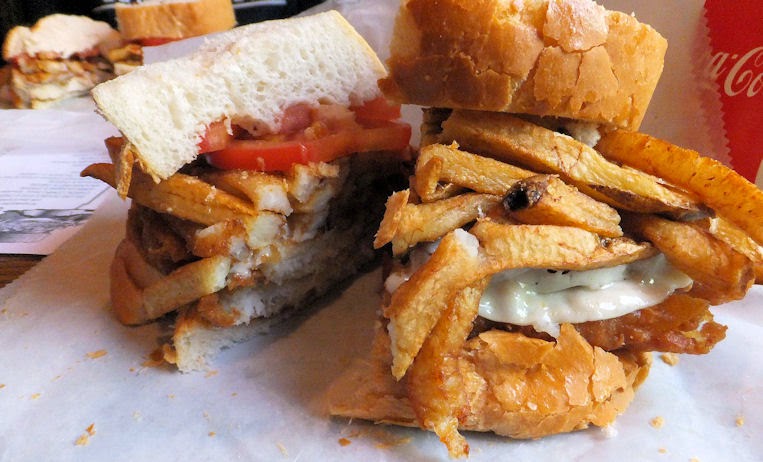 I actually had thoughts about not finishing the second half, which is unbelievably rare for me.  But then I did finish it, so it remains rare.

We limped back to the hotel and vegged for a few, before gearing up and heading down the block to Consol Energy Arena, home of the Pittsburgh Penguins.  Besides the Pens, I’ve only seen 4 other hockey teams… Washington (a bunch of times, in DC), Vancouver, Florida, and Tampa.  Naturally, this game was against Tampa again, so I didn’t get to add to my repertoire.  I had been hoping we could see the Saturday game against Montreal, but they ended up scheduling the Steelers game at the same time, so that was out of the question.

We had excellent seats, in my opinion; 11 rows and to the left of the goal the Pens defended twice.  Sure, the Pens’ scoring action was mostly down at the other end, but on the bright side, they do the pre-game warmups right in front of us.  That way, I can bring the ladies this shot of the Pens’ “unicorn,” Kris Letang. 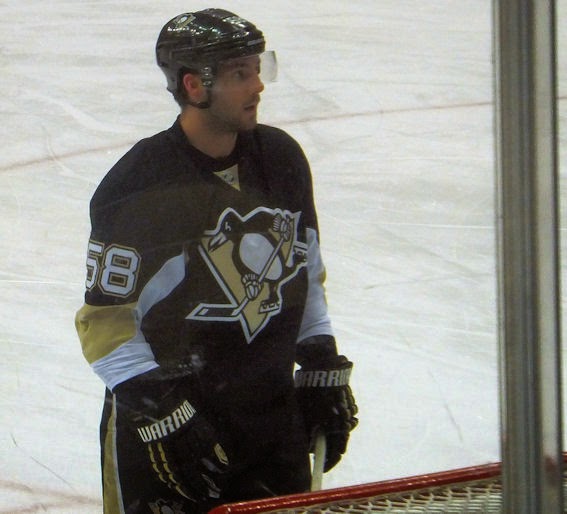 Does he still do it for you, without the flowing hair?

Our game view obviously wasn’t so zoomed in: 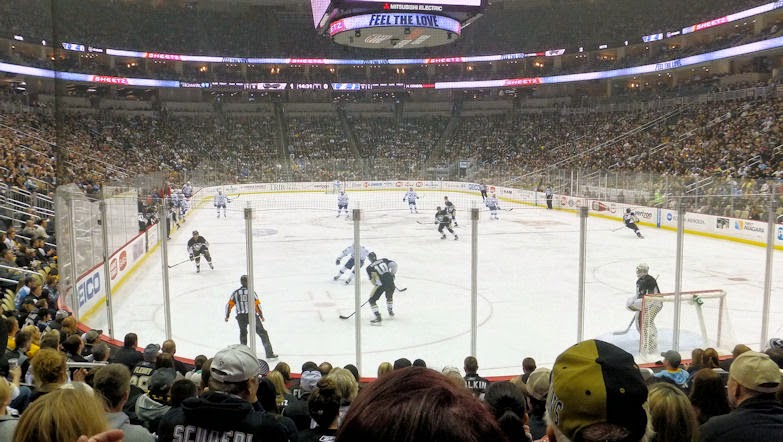 This was our standard view.

I also got a number of good faceoff shots, like this one. 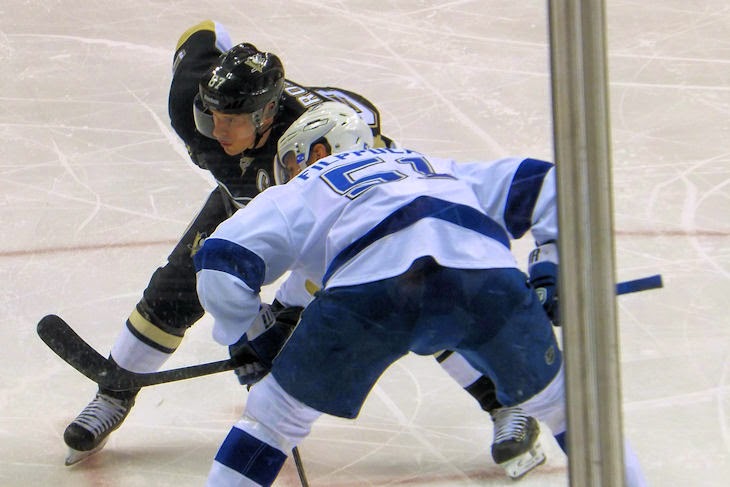 I like shooting the faceoffs, because the players are standing still, which gives me a good chance to frame up the shot and not get a bunch of blur.

The game went well for us; the Pens went up 3-0 in the first period and never really looked back, winning 6-3.  It went much better for the Pens than it did for one of the refs.  At one point, I heard the whole crowd go “Ewwwwwwwwwww!”

I looked around and saw a ref in the far corner trying to get off the ice.  I asked Ed what happened.  He said the ref hurled.  Twice. 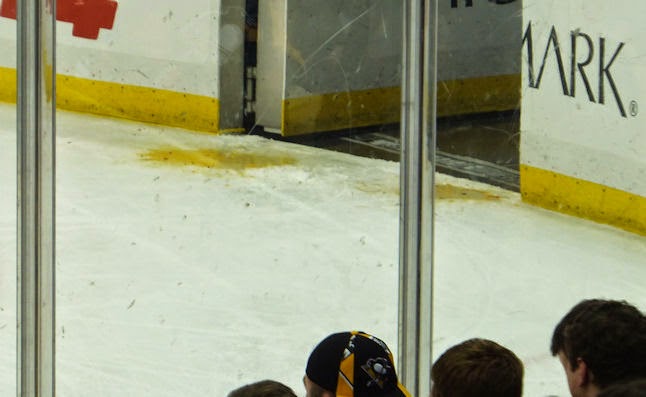 I guess this ref was named “Ralph.”

After the game, we adjourned back to the room to watch a little TV before bed.  Ed and Daniel had a separate room, and I had a rollout bed in the “main room.”  It was comfy… eventually.

See, as I was folding the bed out, I noticed something rolling between the mattress and the frame: 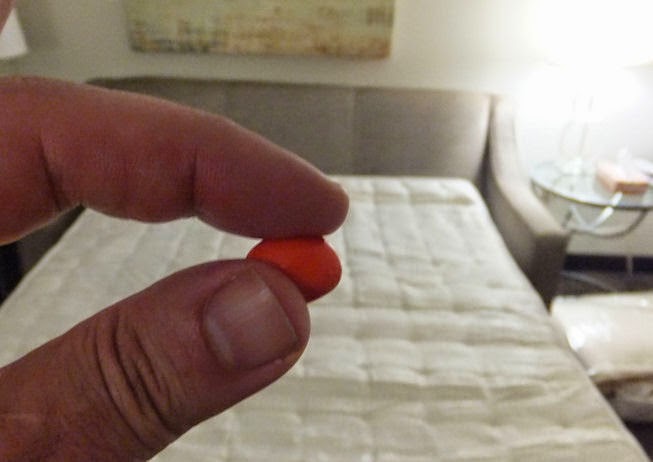 Good thing I found it before I got in bed… otherwise it would have been like an adaptation of a famous fairy tale, this one called “The Prince and the Pea…nut M&M.”

We had to take it slow Saturday morning, due to an ice storm, which shut down all the roads.  So we hit the breakfast buffet and then chilled in the room until around noon, when the precipitation turned to rain and washed the ice away.

We rolled out to the burbs to go see our Aunt and Uncle, who naturally made with the deli spread and wine.  Yes, I mentioned that we just had breakfast.  The food just appears, no matter what I say, I swear!  But we had a great time shooting the breeze and catching up on all the family news.

Then we ran over to see our Grandpa, who will be 99 next month.  He’s still hanging in there, bless his heart.  I am definitely a fortunate man, to have a grandparent with me for so long.

So we hung with Grandpa for about an hour before we had to make a break for it and head back to the room to gear up.  For a change, fortune was on our side.  The weather forecast for days had said it would rain all day and all night.  But just before we left, we checked again and it was updated to 0% chance of rain between 6:00 and 11:00!  I took my rain poncho with me anyway, but we were all able to shed a couple of layers we would have otherwise had on.

There was a subway stop right across the street from the hotel, which took us straight to the stadium.  So even if it had been pouring, we wouldn’t have been out in it for very long.

The train was jammed, but I was greatly entertained by the Yinzer Nation, who was out in force.  There was one kind of loud woman who was sitting across from a young kid wearing a Ravens shirt.  He said he wasn’t from Baltimore, he was local, but he just liked the Ravens.  The lady said, “Whattsa matter, why din’ you drink the Kool-wade?  Your mawm musta dropped ya on yer head.” 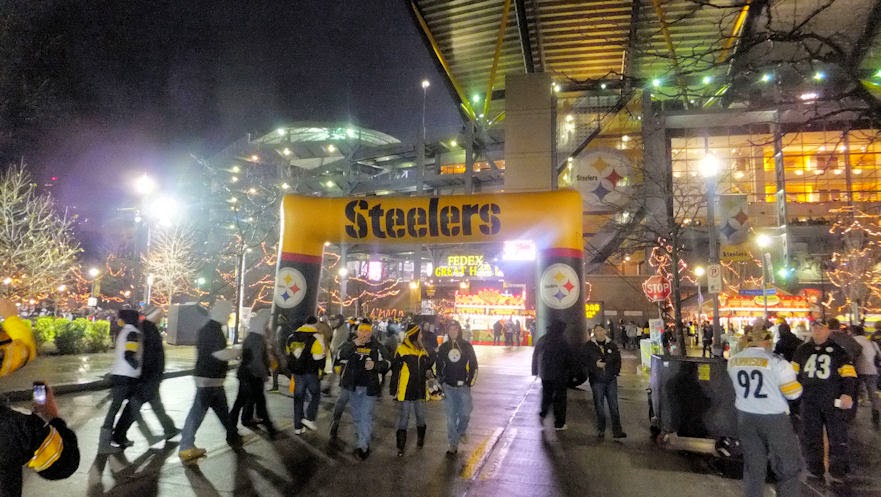 Walking up to Heinz Field.

The rain had stopped by the time we got to Heinz Field, leaving the weather just about perfect for football, at a crisp 40 degrees.  Once inside, my brother and nephew had a nice bonding moment. 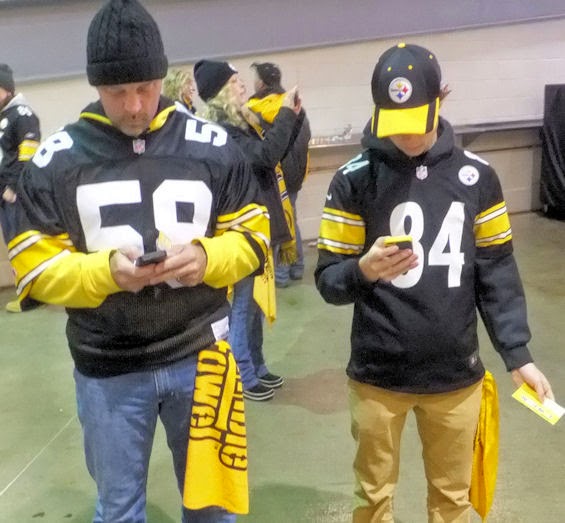 [“Thanks for bringing me to the game, Dad.”]
[“Don’t forget to clean your room when we get home.”]

Even if it had been pouring, we would have been OK.  Ed got us tickets under cover in the club section, one row from the top.  We were all the way on the end of the open end zone, on the side. 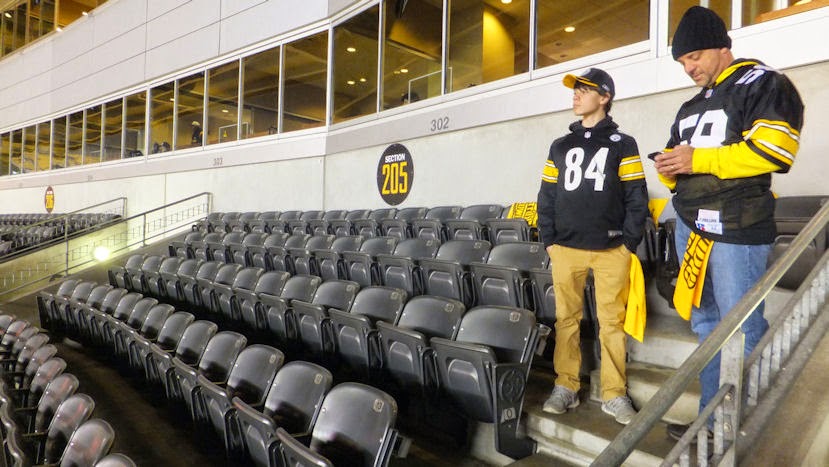 Early on, we had the whole place to ourselves.

At first, I wasn’t sure if we would be able to see the scoreboard, but we were fine.  The only thing we couldn’t see were the fireworks. 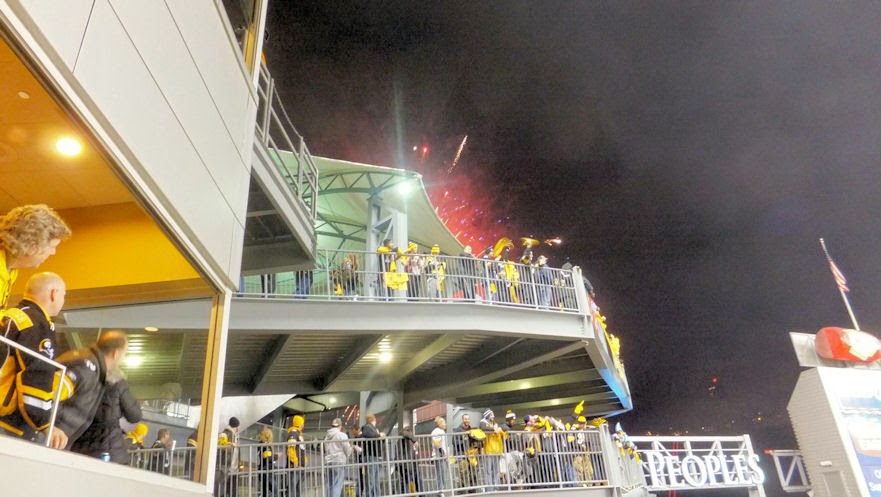 “Hey, can yinz move that ramp out of the way?”

The vibe in the place was insane, like it was ready to explode.  You should have seen the Terrible Towels waving before the game.  They were so thick, it was like you could walk on them. 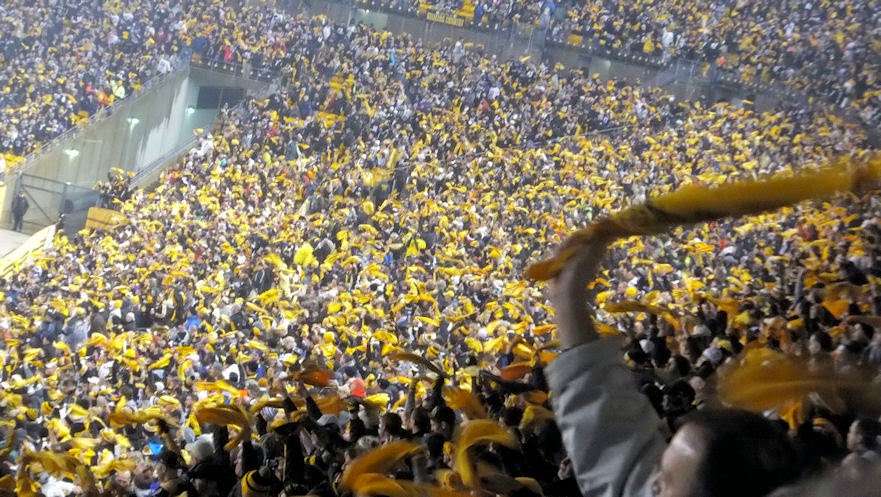 We had a decent enough view, for being in the end zone. 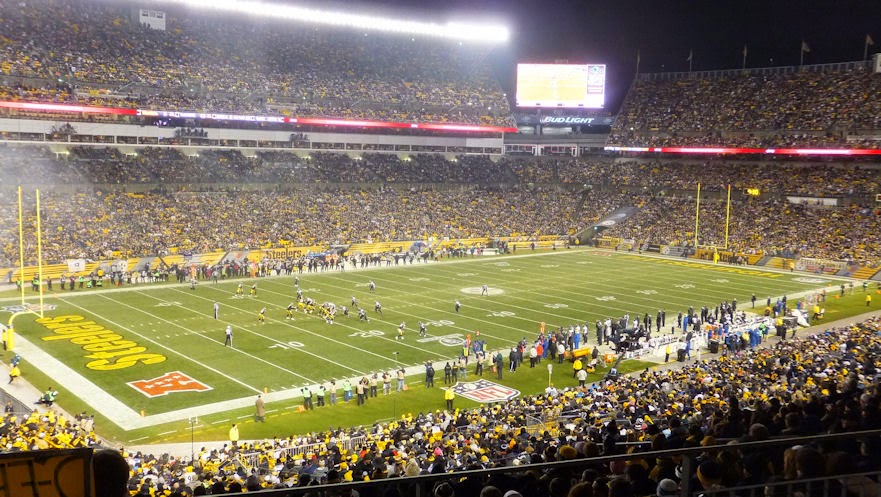 It was nice of them to add that video screen in the corner, for us.  That was new since the last time we’d been there.

Unfortunately, this is where the weekend took a downturn, as the Steelers, without their 1st Team All Pro running back, Le’veon Bell, were badly outplayed by the hated Ratbirds.  Between a horrendous running game, taking stupid penalties and Ben throwing off target more than on, they stunk up the joint and lost 30-17.

But I can’t complain.  I had a ball spending a couple of days with my brother and nephew.  We ate good food, had a couple of drinks and visited two of the country’s top sports arenas.  Can’t beat a Guy’s Weekend Out! 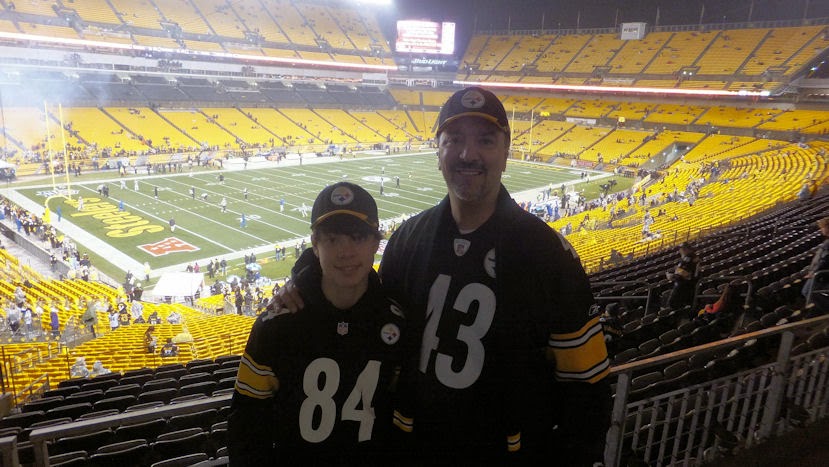 Director’s DVD Commentary: By the way, the title refers to this as a MeatLoaf Weekend, because “Two Out Of Three” teams we rooted for won, which, as we all know, “Ain’t Bad.”
Posted by bluzdude at 8:18 PM