Lurning Kerve
OK, I’m just over a week into owning an iPhone and I’m learning more stuff about what it can do every day.  But it’s not just the fancy stuff… Some things I just couldn’t bring myself to ask anyone about.

Like the buttons on the upper left side.  I could see that two of them controlled volume up and volume down, but the top one was supposed to switch the ringer on and off.  But no matter how hard I pushed it, it never moved and the ringer never changed.  I thought it might be one of those touch-sensitive deals that picks up body heat.  No luck.

Until one night I was picked up the phone and saw a quickly fading message that my ringer had just been turned off.  Unfortunately, I had no idea what I did, and not I couldn’t get it back on.  I scoured though all the settings, but couldn’t change my now soundless iPhone.

Cut to a couple days ago, when my phone cover was delivered.  As I jammed it around the edges of the phone, the lip bumped that top button, and switched the sound back on.  Because the button is flipped back and forth, not pushed in!

I expect any day now, Steve Jobs is going to rise from the dead and take his iPhone away from me.

Hasn’t been a total loss though.  My brother told me about how I can download my bank’s mobile app, and then when I need to deposit a check, just scan it with the phone.  When I got that to work, I thought it was the coolest thing ever.

More Lurnin’
I also discovered an important kitchen lesson.  When you’re making small pasta, like “orzo,” make sure the holes in the colander are smaller than the pasta. 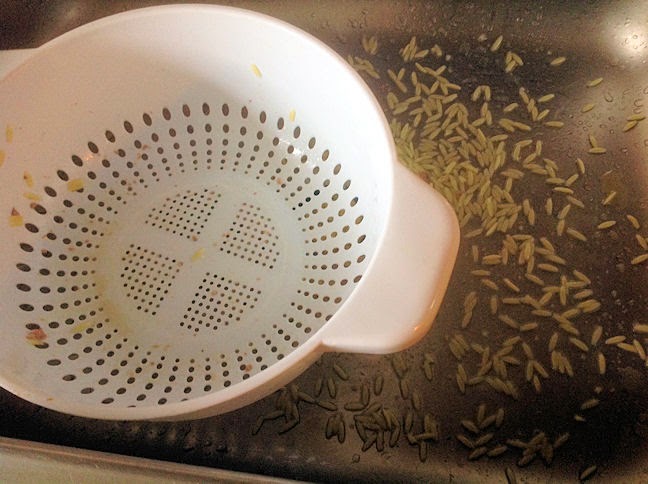 I should totally sue the colander manufacturer, because they should have had a warning on it.  If they can warn you that coffee is hot, they can warn about this.

“The Password is… Kidnapping”
I saw a thing on Facebook this weekend, that explained how parents should give their kids a special password, and that any adults trying to pick them up or give them a ride would have to know the password or the kid shouldn’t go with them.

On the surface, I think it’s a pretty good idea.  We had something like that when I was a kid, but it didn’t quite work out.  I think the problem was that our family password was “Get in the fuckin’ car.”

I called my folks over the weekend, just as they were having their preliminary nap… you know, the nap before they go take their “official” nap.  Some married couples have pre-nups. My parents have pre-naps.

Hats Off
Remember how I used to have all my ballcaps pinned up around my dining room, and then eventually stowed them back on the hallway wall?  Hat Wall 2.0 was starting to get overcrowded, so I had a thought.

I could just “not buy them,” but come on… seriously?  When my team wins it all, I get swag fever bad.  So not only do I have a hat for each championship, I have several.

So, to solve my space problem, I created the Championship Hat Wall, back in the dining room where I used to have them.

I’ve got hats from Ohio State, the Steelers and the Penguins.  Now if only the Pirates or Orioles can bring one home, I can cover all my sports.  Might need more wall though…

Trite-gate
Aside from the Giant Killer Death Snowstorm hitting the Northeast, the story of the week continues to be “Deflategate.”   That’s about how the New England Patriot are accused of deflating the footballs they used on offense, to make them easier to grip and throw during the AFC Championship Game against the Colts.

First of all, let me declare here and now that I sick to death of the media adding “gate” to every scandal or controversy.  I mean shit, Watergate was 41 years ago.  Can’t we do any better than this?

I’m just biding my time.  Sooner or later there will come a snafu that will either resist being “gated,” or will become spectacular.

For example, if there was an issue with someone’s gated community, would it become Gategate?  What if it were Bill Gates’ gated community?  Would it be Gates’ Gategate?  And if Bill Gates were to divorce his wife and then marry gorgeous former Star Trek–Next Generation actress Gates McFadden, and she was the instigator of the whole controversy, it would have to be called Gates Gates’ Gategate.

Ooh!  Ooh!  If she is tried in court on the controversy and is acquitted, we could say Gates Gates Skates Gategate. 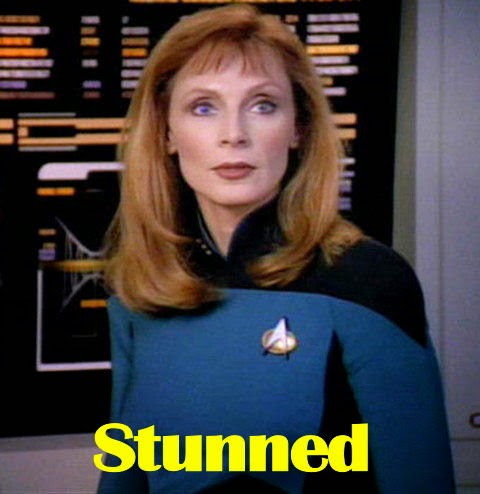 Director’s DVD Commentary: If you don’t like this kind of silliness, you’ll want to avoid this post at all costs.

Now, about this deflated football thing…

First of all, I find it impossible that any kind of natural conditions are responsible for deflating the Patriots footballs but not those used by the Colts.  Regardless that the physics put forth by the coach are questionable, the fact remains that the same physics would apply to both sides of the field.

I further find it extremely unlikely that Bill Belichick, who has a reputation of being a control freak regarding all aspects of his team’s preparation and execution, was ignorant about how the footballs are prepared for his team every week.

And it would be astounding to think that QB Tom Brady, the heart and soul of the team and the man throwing the passes, did not explicitly approve of the deflation.  I mean, he’s the field general.  Nothing is going to happen to those footballs without his express approval.  What flunky would risk his wrath if he didn’t want the footballs softer?

The NFL is conducting its investigation, which I hope is more robust than their half-hearted attempts to investigate the Ray Rice Elevator Punch.  Assuming they find fault with the team, they need to come down hard on the Patriots.  This issue goes to the very fabric of an even playing field.  One team cannot be given equipment of a different standard than the other team.  It’s like making one team go uphill.

And given that this will the second time the Pats have been caught violating the rules regarding fair play, they need to be smacked down hard.  No, I’m not saying remove them from the Super Bowl, it’s too late for that, but they need to lose big draft picks, and people need to be suspended… Belichick and Brady, at least.

Whether Belichick even had specific knowledge or not doesn’t matter.  It’s the same thing as with the Chris Christie bridge scandal.  The leader sets the culture of the office, or team.  No one would ever dare step out of line like that, if they didn’t think it would please the Boss.

It also doesn’t matter that the deflated footballs didn’t seem to make much difference, as the Pats pushed the Colts all over the field.  Attempts at cheating are not nullified by the cheating not having the desired effect.  It’s still an illegal way to give your team an advantage that the other team doesn’t have.  The integrity of the game has to be preserved, or else the whole thing becomes a joke.  Goodell needs to live up to his own mantra and Protect the Shield.

What will happen?  I think they’ll find some lackey to take the blame… an over-enthusiastic ball boy or something. 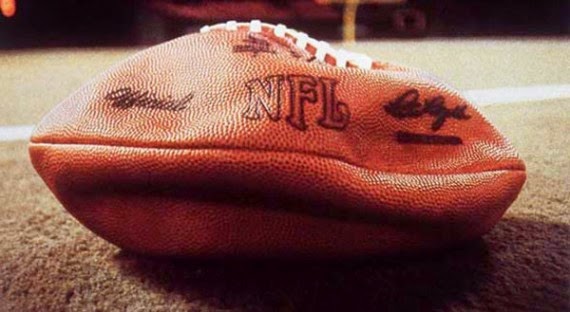 Apparently Vince was trying to hatch this one.