Today I’m reminded of that old Rodney Dangerfield opener, “Y’know I’m all right now but last week I was in rough shape.” [tugs at non-existent necktie]

You remember my old friends, the kidney stones?  They made a return visit, one that was overlong and not appreciated.  If you’ll recall, I had that 7-mm stone in 2013, which moved painfully into my bladder and then ceased all activity without ever passing.

It was on my left side, but they told me I also had two 5-mm ones “in the chamber” on the right side.  They stayed put, until last Tuesday.

For a while now, I’d been wondering if the original “Death Star” was breaking up because I could sense that something might be awry in the old pipes.  I thought I saw a black flake pass while I was peeing, but I was never sure.  I’m old, so it could have been dust.

Then Tuesday I was on the hopper at work, as one often is during times of discovery, when I gave one last push and Sweet Mary Mother of Fuck!  A huge pain exploded in my mid right side, just under the short ribs.

The scary thing about the first time it happened was that I didn’t know what it was.  This time, I recognized it right off, so I knew what I was in for.  I was just hoping I wouldn’t have to hurl at work.

I was more angry than hurt because I had plans that night to go to the Orioles game with Sitcom Kelly.  She had her mom’s company seats behind home plate and the team was celebrating the 20th anniversary of Cal Ripken breaking Lou Gehrig’s consecutive game streak (or just “The Streak,” as it’s known here in Baltimore).

Luckily I was still carrying a bottle of Percocets around, which were prescribed to me the last time I had a stone.  (Percocet = Oxycodone + acetaminophen.)  I waited about an hour, to make sure it didn’t just go away on its own, and then took a couple of Percs.  Not much happened in the next half hour, so I emailed Sitcom Kelly to tell her it didn’t look like I was going to be able to make the game.

Then 30 minutes later, I realized that the pain had gone away completely.  I was like, “Damn, this stuff is good!”

I mean, it’s no Dilaudid, but it did the job.  I emailed her back again and said, “Wait up, I may be able to go after all.”  Luckily she hadn’t found another taker yet.  We waited another hour or so before I recommitted.  Meanwhile, we kept emailing.

Sitcom Kelly: I’m having a “how will this affect me moment.  Are you going to be grouchy?  Or will you be fun because you’re doped up?

Bluz: I will be my usual charming self.  Not feeling grouchy at all, although that may change in the face of more blinding pain.  But I will try to whimper quietly, so to not infringe on your enjoyment of the atmosphere.

I figured I’d bring the Percs with me, for when the pain flared up again.  I wasn’t naïve enough to think the pain gone for good.  I was concerned about drinking, though.  There was no warning on the bottle, but the Internet (I think it was pillhead.com) had a doozy.  I learned mixing Percocet and alcohol could cause “drowsiness, dizziness, lightheadedness, difficulty concentrating, and impairment in thinking and judgment.”

I was like, “That’s just like any other day at The Bullpen before an Orioles game… What’s the problem?”

So after work, I eased over to the ballpark and met Sitcom Kelly at The Bullpen.  Because it had been about 5 hours since I’d taken the Percs, and they had an “every 4 hours as needed” dosage, I felt fine with having a beer.  In fact, I had two, but that was it.  About 6:30, I got a bottle of water for the road, and because I was feeling it twinge up again, took two more Percs, then we went into the Yard.

We were just in time to see the Iron Man himself, Cal Ripken, come out of the dugout to throw out the first pitch. 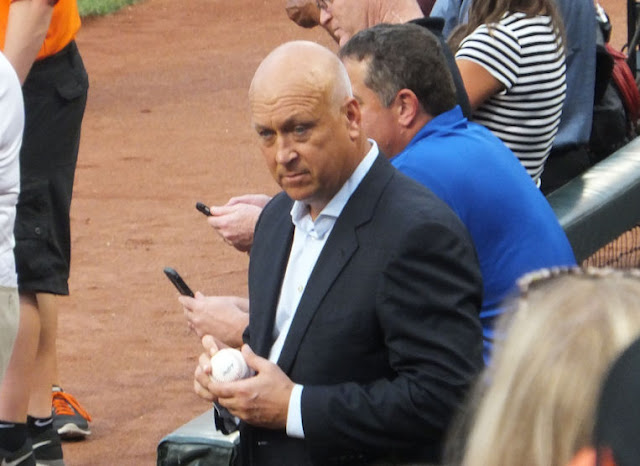 Cal coming out of the dugout.  He saw his shadow, so that means 3 more weeks of bad baseball. 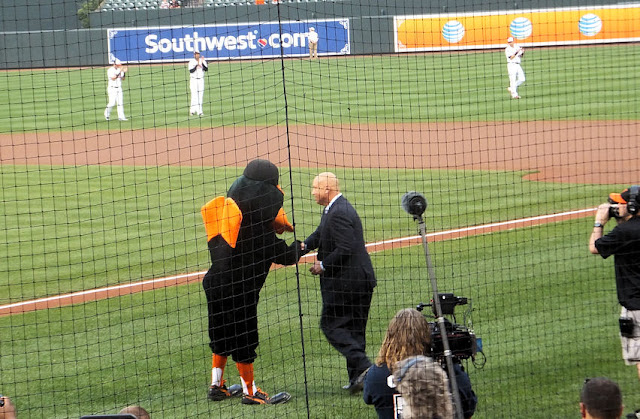 Cal taking the mound and schmoozing The Bird.

I basically felt fine throughout the game.  And speaking of “fiiiiine,” I spent at least a couple of innings talking with a good looking blonde from Iowa, who was sitting in front of us.  She was with another dude who I thought was her husband, but she mentioned he was her boss and they were in town for a seminar or something.  She was staying at a 4-star hotel right beside my office building.

Eventually, I spotted a ring on her left ring finger and then she mentioned being married and having kids and stuff.  [Cue dying PacMan sound effect.]  Oh well.

But it was funny because when I was talking with Sitcom Kelly about it later, I was like, “I don’t know what I thought I was going to do with her tonight, even if she was single… not with these kidney stones on the move.”

I’m pretty sure pacing around and alternately clutching my side or throwing up is not a huge turn-on.  Granted, I could have asked her to lunch the next day, but I don’t chase married women.

But maybe I should take my next vacation to Iowa.

Anyway, we (Sitcom Kelly and I) left after the 7th inning, because the Orioles were getting their asses handed to them again.  I was OK getting to the subway and riding back to my car, but the pains started again in earnest as I drove home.  I came very close to hurling in the car but managed to beat it back.  Then once inside, I got to the bathroom in time but still managed to deep-breathe it away.

Two more Percs and I was out for the night and felt much better on Wednesday.  I thought I was clear, but the pains returned again on Thursday and Friday.  In fact, on Friday, I left work early so I could have a pill and a nap.  It was pretty bad.

But then after my nap, I felt OK, and it’s pretty much stayed that way.  So maybe the two episodes of pain were the two stones working their ways out separately, and on into the bladder.  Still though, nothing has actually passed so I presume they’re still in there.

I bet if I did some jumping jacks right now, my bladder would sound like maracas.

The rest of the weekend was pretty good.  My parents were in town so I went to my brother’s every night to hang out with the Fam.

Monday, I made my annual trip to the State Fair to bet on the horse races.  I did OK… I lost about $16 over 8 races, which was greatly aided by hitting an exacta for $25 in the last race.

The third race was strange because 3 of the 6 horses scratched before the race.  I’ve never seen a race before with only 3 horses running. 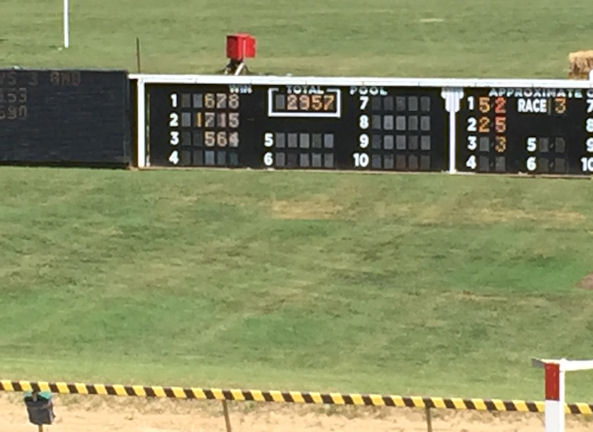 Then as a kicker, the top two horses finished in a dead heat… a balls-on tie.  On the plus side, I had both of the horses in an exacta box.  (Meaning they could finish 1-2 with either one winning, and I’d win the bet.)  So with the dead heat, I got a payout for each combination.  On the minus side, one combo paid $2.10 on a $2.00 bet, and the other paid $2.80, for winnings of a whopping ninety freakin’ cents.

In other words, the only “Benjamin” I’d be seeing was the one on my bottle of Diet Coke. 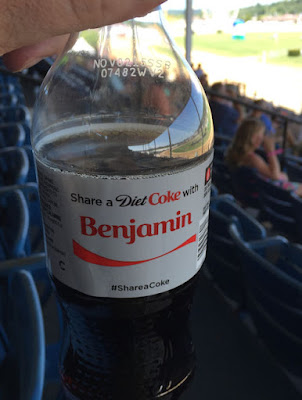 After the races, it was back to my brother’s for the opening Ohio State game of the season.  As always, we dressed for the occasion. 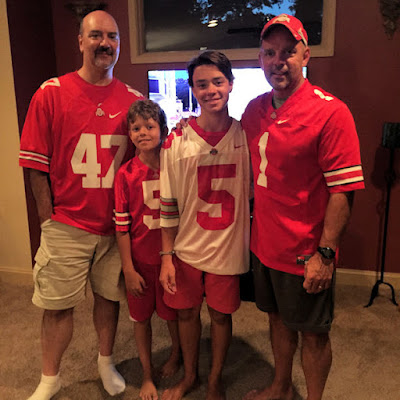 I swear those kids were toddlers 20 minutes ago.

The Buckeyes are scary good this year. Between their incredible talent and cake schedule, they should have nothing to fear all season but self-inflicted disciplinary suspensions.

In less fun news, I was saddened today to read of the death of Judy Carne, who used to be on Laugh-In, in the 1960s. 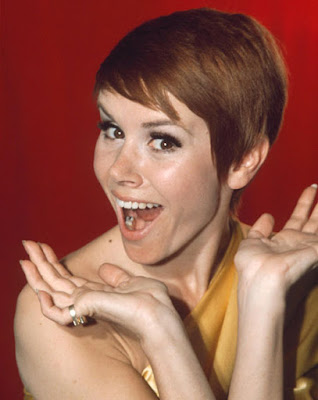 I used to love Laugh-In when I was a boy, not only because it was funny and silly, but I loved Judy Carne.  Most other people went for Goldie Hawn and I liked her too, but there was something about that little red-headed English pixie that I found fascinating and completely adorable.  I mean, I liked her even more than CatWoman, because Judy knew enough not to mess with Batman.  (Hey, I was, like, 7, so sue me for having had a limited frame of reference.)

I used to get upset every time they’d do the “sock-it-to-me” bit and she’d get doused with water.  I hope that where ever she is now, there’s a cozy fire and an endless supply of soft towels.
Posted by bluzdude at 6:55 PM