Now that all the election hoopla is over, except for a few odds and ends… (coughPetreuscough…) I now return to my regularly scheduled bullshit, which is some orphaned retail stories that didn't fit in my 13-part magnum opus.

Art-ifacts
During the time that I worked at my first record store, I was in college, getting my degree in what was then called “Radio/TV/Film.”  I had intended to use it to go into the radio business, but it never quite worked out.  However, I was able to put my media training to good use in the store.

During the first few years I worked there, we were a small, regional chain, so we operated with a high degree of autonomy.  The store manager basically had free reign.  But the owners eventually went “bust” and had to sell out to a larger music chain.  At that point, everything was highly controlled from the home office.

Those first few years, though, were a lot of fun.  Our store was a hip, happening place to be (and work.)  I just missed the real “heyday,” when they used to keep artists on staff to produce the “album boards.”

These album boards were 6-foot by 6-foot airbrushed paintings of album covers, and hung inside and outside the store.  Before I started there, the boards would hang for a while, and then be sold off via auction.  By the time I got there, they weren't producing any more album boards, so what we had hung up there permanently… at least until the company went under.

There were times that we had to trim our product orders to fit within how much money we made the previous day.  So eventually, they decided to sell the album boards.  While I desperately wanted the one for Joan Jett/Bad Reputation, I didn't have any extra scratch to blow on a giant wooden album cover.  But my Dad did.

Unfortunately, he was drawn to a different album board.  I’m sure you can see why. 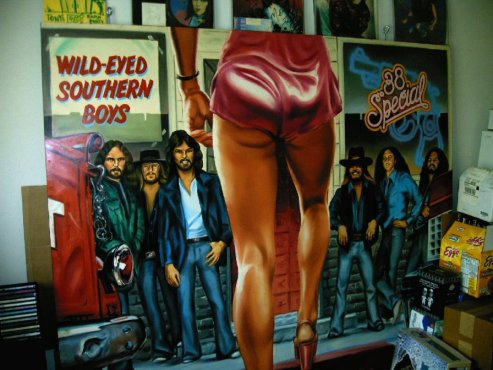 My boss sold it to Dad for $50, and he took it home where it hung in our Barn, right up until we sold the place.  Then it became mine.  I schlepped it all over the country with me as I moved about, until I finally sold it in 2007... on CraigsList, for $50.  In the ad, I said that there was a minor smudge mark in the middle, from old nose prints.  It was a joke.  But that was the first thing the buyer asked about.

Radio Daze
Anyway, the reason I told you about the album boards is that once we started getting rid of them, my manager cut a deal with a couple of radio stations.  In exchange for hanging up 6x6 boards featuring their logos, they would give us 30 radio ad spots per month.  We would write the spots at the store, then they’d produce and air them.  With my radio training, the job of writing the spots fell to me.

Now I’ll be the first to admit that most of my spots were quite pedestrian… workmanlike, if you will.  We had fabulous low prices for the time, so that was what I hit the hardest.  But one day while I was putting out stock out on the floor, I came by an idea for a spot.  It started with a play on words using a band’s name and then it just snowballed from there.  The first chance I got, I went to the back room and started getting some ideas on paper, and then quickly, I had the finished script.

Our radio contact guy loved it.  In fact, he told my manager that it was one of the best spots he’d seen, including those they wrote themselves.  This was the 80s, so I assumed the radio guy was stoned.  But so were the listeners, so I took his compliment seriously.

Because I wrote the spot as a conversation while a couple is watching TV, the station needed a female voice, but at the time, did not have any female on-air talent.  So they used one of their office workers, an admin or receptionist or something.  She did very well, in a tough spot.  I mean, I probably over-wrote for the 60-second spot, so they had to really fly through the dialog.  I don’t think I ever heard the spot broadcast, but they did give me a copy on cassette.

Last week I dug it out of the archives, came up with some graphics to go along side it, and put it all together with Windows Moviemaker.  May I now present to you, in all it’s monophonic glory, The WRQN Spot.

The radio station totally should have offered me a job.  But because I never spoke with the radio people myself, my boss probably put the kibosh on it.  Probably told them that I had herpes or something, and couldn't be trusted to handle their mics.

Bluz Schmooze News Crews
Ours was by far the largest record store in the area, so whenever there was a music related story on the news, the local stations would come to us to film their reports.  My boss used to handle that stuff, until one of the crews edited his responses in a less than flattering way.  (They made him look like a dipshit, to tell the truth.)  From then on, he sent me out there to handle the film crews, which was fine with me.

It turned out that I most always knew someone on the news crew, either the reporter or the cameraperson, from my radio or TV classes.  In fact, one time, the reporter was a girl I’d dated.  (Luckily, it had just been a one-time thing; we were never an “item.”)

I remember appearing in two news reports and helping set up camera shots for a third.  The first time was on the occasion of Elvis’s death and they wanted to know if he was still a factor in record sales.  He wasn't, but I lied and said he was.  “He’s still the King,” I said.  (Somehow, I kept myself from going “Thankyouverrmuuuch…)

It may have been my ass on camera, but my boss always told me what he wanted me to say.  We had to make sure that the store, the chain, and the music industry was represented correctly, lest it come back to bite our asses later.

Like when a reporter came out to talk about how cassettes were surpassing LPs as the dominant music medium, and about the effect of home taping.  I had to make sure I didn't formally come out and embrace home taping, or we could incur the wrath of the record industry, who was fighting tooth and nail against it.  (They wanted to sell you the tapes, they did NOT want you taping an album for your own use and ESPECIALLY didn’t want you taping an album and giving it to a friend.)

Another time someone came out looking for album art to use under voice-over.  The guy asked me to show him “the wild covers,” but what he really meant was the “devil” stuff.  I showed him some Sabbath, Ozzy, and Dio before I caught wind of what he was trying to do.  I pretty much stopped helping once I realized he might be setting up a music censorship piece.  (This was the time of the PMRC, when record censorship labeling came into play.)

It turned out that they were interviewing a professor of pop culture at my alma mater, Bowling Green, who was saying that music is no more or less of an influence than any other factor in our violent, sleazy culture.  So I guess I didn't do any lasting damage to Free Speech, by helping the guy.

When I conceived this post, I figured I’d spice it up by showing you the clips.  When they were originally broadcast, I recorded them on our brand new VCR.  7000 video tapes later, I can’t find squat.  I KNOW I have the “cassette versus LP” clip around here, but I can’t find it.  It’s probably jammed on a tape somewhere between a couple of movies, or HBO comedy specials.  I did find the “devil music” clip, but it’s not terribly interesting, (in that I don’t appear in it).

BUT, while I was scouring my video files for you videophiles, I did find that Internal Theft training film I was in, that I mentioned in the previous Loose Ends post.  The whole thing runs about 15 minutes, so I just pulled out two short clips.  Before this morning, I honestly haven’t seen this thing since we made it in 1991.

One thing I forgot is how they told us that the final product would be all voice-over, so anything we said while filming would not be heard.  Can you imagine that?  ME? With a camera rolling and able to say whatever I wanted to my fellow “actors,” with no consequences?

There is one scene in particular, at the end of the Clip 1, when I’m up at the register with the other younger guy.  The stuff I was saying to him was completely foul and profane.  I was dropping F-bombs like confetti in a tickertape parade.  You can see him, right at the end, put his finger to his mouth to keep from busting out laughing.  They cut right before he did.  I was so proud.  That was a fun night.

The other thing that kills me is how skinny I was.  Good gravy… it must have been that “All Stress and Long Hours” diet that so many of us were on.

So, forgive me for not showing you a clip of me waxing on about the glory of cassette tapes.  Instead, may I present yours truly, your humble bluzdude, in his starring turn as The Good Manager, in the underground hit training video, “Internal Theft – The Biggest Ripoff.”

I love the look on her face at the end, as she looks upwards, thankful that I’m not calling the cops yet.  Also, damn, I looked young… not a gray hair to be found.  I must have been 29 or 30.

Geez, I was still older, waaaaaaay back then, than Cassie or Jessica are right now.

Director’s DVD Commentary: I did have one detail wrong in that Loose Ends post… When we made this film, I was not yet in the home office; I was still in the store I was running immediately preceding my joining the office.  The rest of the cast was made up of other store managers and employees.
Posted by bluzdude at 3:52 PM