The prospect of instituting term limits gets bandied about every so often and it’s usually a pointless endeavor because, at the federal level, it’s highly unlikely to change. No politician is going to vote to shorten his period of power and influence, not nearly enough of them to make it happen. But it’s a different story on the local level.

Last week, the Baltimore Sun ran a story about an effort to establish term limits in the City of Baltimore, via voter referendum, which would include Mayor, City Council, Comptroller, and such. Now, I can usually see the pros and cons of term limits… you sacrifice institutional knowledge for new ideas. It can be good to get some new people involved but they spend their first weeks or months not knowing how things really work.

But one thing jumped out at me immediately that convinced me to not be in favor of term limits and that’s because Sinclair Broadcasting wants them.

As you can see, the president of Sinclair Broadcasting financed the effort to collect signatures for the referendum to put the matter on this fall’s ballot. If Sinclair wants it, it’s going to be bad for the community. Sinclair is basically Fox “News” with a larger reach. They own 185 TV stations in 86 markets, including the Fox and The CW affiliates (and one more) plus two stations in DC. Their local TV news broadcasts are always touting their investigations into Baltimore City, be it the schools, crime, or the economy, and it’s always about scaring you to death. They hype their ambush interviews all day long during commercial breaks. They also require their affiliates to run prerecorded station editorials that would sound right at home on Fox and Friends.

If the mayor of Baltimore found a way to cure cancer, their top story would be about city “death panels” deciding whether you get treatment or not.

I’m sure Sinclair would love to have a crack at altering the 100% Democratic makeup of city government, maybe promote a DINO or two that will carry water for them, like their own pet Joe Manchin. Or maybe they just want some of their people to be able to get in, loot what they can, then make room for the next hog at the trough. They may also want to get someone in there who will promote other “connected” businesses for city contracts.

I don’t know why they’re worried about the Mayor though. We haven’t had a mayor serve out 2 full terms since I can remember. They either move up and on like Martin O’Malley, who became a 2-term Governor, get caught with their hands in the cookie jar like Sheila Dixon or Catherine Pugh, or abandon re-election hopes because they said something irreversibly stupid during their first term, like Stephanie Rawlings-Blake. Maybe our current Mayor, Brandon Scott, is a boy scout who they’re afraid will be here for at least another term. If he actually turns things around in the city, that would be their worst-case scenario.

But with five stations in the market, Sinclair will wield great influence over what we see on local TV, especially as it gets closer to November. If it works here, Sinclair may try the same plot in other markets they service, like New York, where they operate eight stations across the upstate region.

I’m far less concerned about term limits than I am about the consolidation of the broadcast industry. Since deregulation, we’re seeing more and more stations owned by fewer corporations, giving a select few people an outsized voice on public matters. Sinclair is showing why less diverse media ownership is a bad idea.

Give Us a Break

The bigger news of the week was that President Biden issued $10k in student debt relief to people making less than $125k, with 80% of that going to those making less than $75k. This provoked the predictable gnashing of teeth from the Right, who don’t like anything going to someone they don’t like. The deliberate misleading of the public began immediately, with memes about why common workin’ Joes should have to pay for schooling for a bunch of rich lawyers, which willfully misses the point about how the people making serious bank aren’t eligible. And when they weren’t misleading about qualifications, they were misdirecting on why people go to college, by presuming they’d be paying for smelly hippies to take interpretive dance and basket weaving.

If this stuff is coming from the rank and file, it’s clear they don’t really know what happens in college. And if it’s from the slick right-wing propaganda machine, they know that the rank and file will eat it up and pass it on regardless.

One of the most prevalent complaints is the fallacy that they are somehow personally stuck with the bill… as if they’re going to be required to start sending in $100 checks every month. Again, that’s the slickness of the messaging operation on the Right. They know this stuff will hit home, and their target audience will never realize that every citizen in this country pays for shit they’d rather not… except the 1% who don’t pay for anything (and want to keep it that way.) 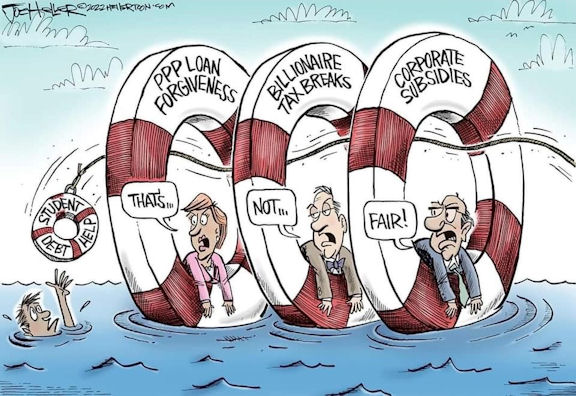 The real fun began when the various MAGA Congress people started tweeting about it and the Whitehouse smacked them down by pointing out how much they had forgiven in PPP loans. 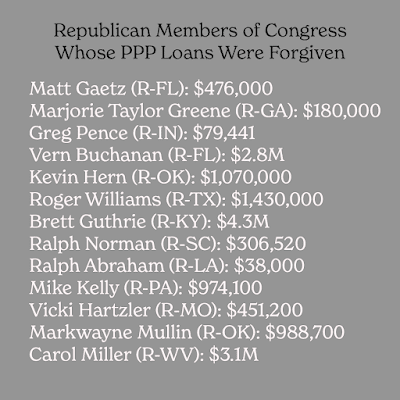 It was nice to see the Dems on offense for a change. And all they had to do is highlight the raging double standard put forth by these “public servants.” Loan forgiveness is a sin to them unless it’s their own loan. And hell, it’s not even a sin, it’s a biblical requirement! 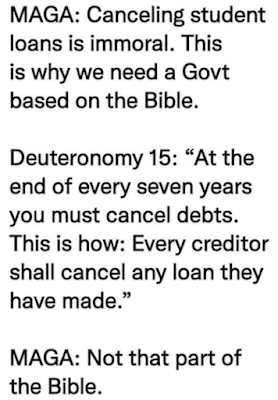 Or is the bible another thing that only applies to others? (Obviously.)

The other main nit to pick was from people who either paid their way through school or paid off their own loans, the logic being that it’s not fair to them for someone else to have their loan forgiven after they’ve already paid. To these delicate flowers, I say, “tough shit.” Life isn’t fair, the government isn’t fair, and these predatory, damn-near-impossible-to-pay-off-without-being-filthy-rich student loans aren’t fair. 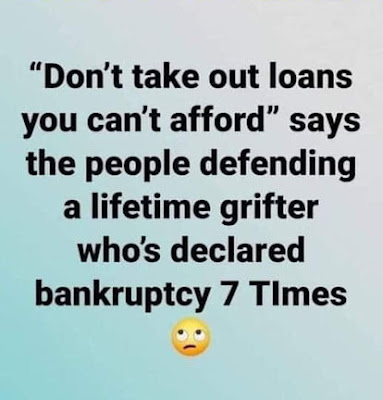 I paid my own way through college without needing a loan, so I’m in that group. But I realize that back then, you could pay for college with a part-time job. Those days are long gone and if people want to better themselves through education, student loans are a way to go. Up until very recently, it’s what the culture said was the right thing to do; go to school, go to college, and get an education. Of course, now getting educated is tantamount to getting groomed to be a pedophile communist to the MAGA brigade. They don’t trust no fancy book-learnin’, no sirree. And they certainly don’t want to feel like they’re paying for it. And that’s what counts today, isn’t it? Feelings. How we feel about things, regardless of the facts at hand.

I know first-hand how oppressive it is to have these loans hanging over one’s head, especially when a college education doesn’t translate to high-paying jobs. I know college graduates who struggle to keep a roof over their heads and food in the fridge. The way the loans are set up, they have no chance of paying them off, ever. No matter how many payments get made, it makes very little difference in the principle owed. Removing a chunk (or all) of that debt is like getting the boot lifted off your neck, even just a little. If more jobs paid a living wage, the boot would come off a little more. But in the meantime, people living in the margins might have some more money to throw around the economy, so everyone eats better.

I think this is exactly what the country needs right now.

So yeah, I’m not getting any of this new benefit, but I’m OK with those that do. I'm on the side that thinks it didn't go far enough, but I'll take it as a win for now. It will help the community and the economy. The federal budget is a black hole of spending anyway, at least this is something they’re paying for that helps Americans. At least the ones who know the value of education.

Couldn't agree with you more about Sinclair. As you note, their DC station WJLA is a 24-7 fount of "crisis in the classroom," look at what Glenn Youngkin is doing for you "coverage." Really infuriating. Somewhat balanced out by the local NBC and CBS affiliates.

It should be more like what "Youngkin is doing TO you."

You know, I think this unrelenting bad news hype about Baltimore is what leads to situations like the one this week about the film crew claiming they were being shaken down by local thugs when it was basically a street vendor who wanted to be compensated for having to move his stand (due to filming.) The panic shut down the whole operation.