Views on a Ballgame

You don’t have to bail if sports isn’t your thing. This isn’t about sports so much as it is about the experience of going out to a big public event. Whenever I’m at a concert or a game or anything else, I automatically start looking for things I can tell you about regarding my experience.

Two days after I went to see ZZ Top (and was annoyed by people who dared stand around directly between me and the stage), I took in a ballgame as well. Every year, I like to take what I call a “Ferris Bueller” day. That’s where I take a day off work and go see a daytime baseball game. As a citizen of Baltimore, I’m lucky to have major league baseball right here in town, and given the Orioles' recent past, getting tickets is a snap. The O’s only play one or two (non-holiday) weekday games a year so there aren’t a lot of choices. This one against the Tampa Bay Rays would be the last one of the year.

Another reason I chose this game is that it looked like it would be the last game as an Oriole at Camden Yards for Trey Mancini, an Orioles draft pick, longest-tenured player on the roster, cancer survivor, and my wife Sweetpea’s favorite player. She calls him her “Sweet Sixteen” (because he wears number 16). All signs pointed to his being traded before the fast approaching trade deadline date and this was the last home game for the next week. I wanted to be there to see him off.

When you see a day game, seating is important. Because I’d rather not sit out under the burning sun for three hours and stew in my own juices, I always get tickets under the deck on the third base side, so I’m in the shade the whole time. On this day, I found a ticket in the first row. I was like, “Great. I am now impervious to people blocking my view.”

I totally should have known better. 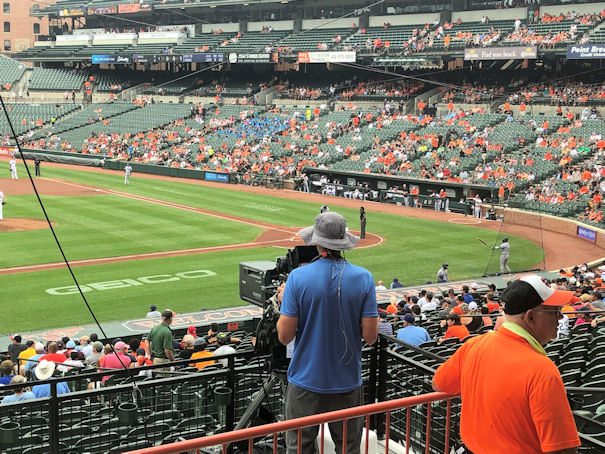 Naturally. The camera guy is right there between me and the batter.

Since I had to look around anyway, I couldn’t notice this block of fans down the first base line: 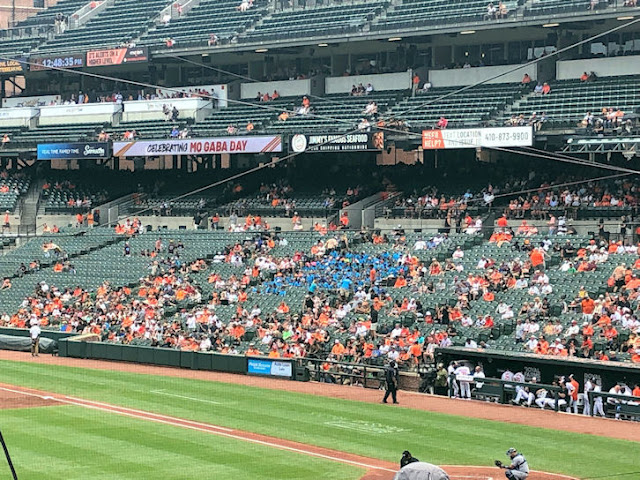 Who knew the students from the Beauxbatons School of Magic* were in town? I thought to myself, if anything weird happens, I’ll know who’s responsible.

One of the cool things about sitting in the first row of this section is that I can see people’s food when they bring it back to their seats. That’s helpful for when I get hungry, then I can decide what looks best to me. 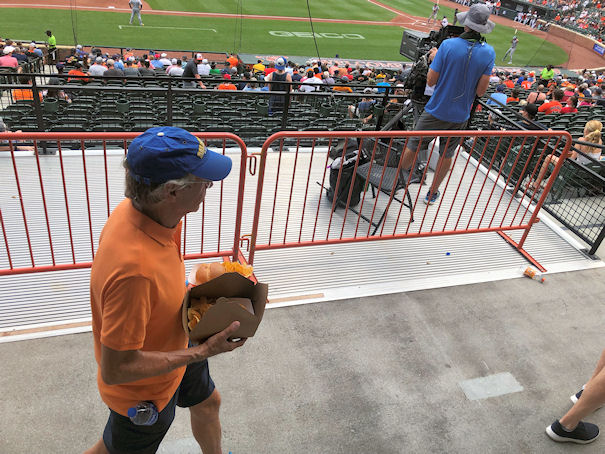 It’s like the wait staff is showing me my options.

It was also from this vantage point that I could see how many people needed help finding their seats. I was stunned. I mean, there are numbered sections, rows, and seats. There are site maps all over the park. How hard can it possibly be to find the seat that matches your ticket?

Let me tell you a quick side story…

Many, many moons ago, my dad took the family to California for almost a month’s vacation in the Bay Area. Well, it was a vacation for us; he had to work out there and took the family along. As it happened, he came into a pair of tickets to see an NFL preseason game between the Oakland Raiders and Dallas Cowboys. That meant that for the three serious football fans, my Dad, my brother, and I, there were only two tickets. Being a good dad, he gave the tickets to us. I was 14, my brother was 11.

Dad drove us to the stadium and dropped us off, telling us where to meet him when the game was over. We went in, and I was able to look at the ticket, navigate my way around the concourse, go in the corridor that led to our section and find our seats. Then we watched the game, took a few pictures with my snappy little 110-Instamatic camera, and we had a blast. 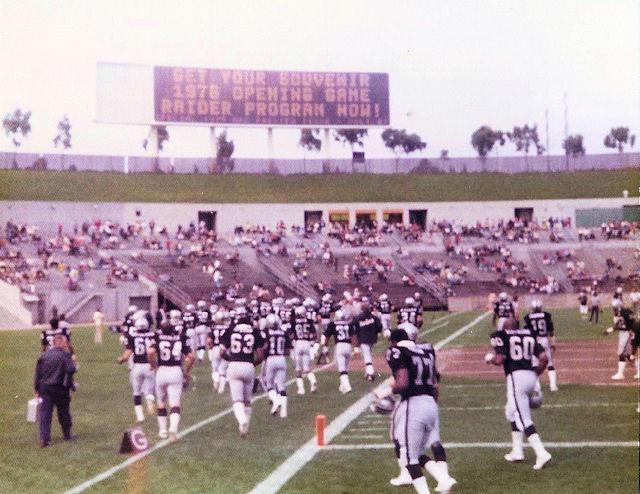 When we were done, we went to our meeting spot and Dad picked us up. No muss, no fuss, no sweat.

Can you imagine anyone doing that today, dropping off 11 and 14-year-old boys at any football stadium, let alone Oakland’s? (To be fair, they didn’t have the scary guys with spiked shoulder pads and black face paint showing up yet.) It was certainly a different time then, that’s for sure.

Anyway, my larger point is that I could find my seat in a stadium I’d never been to at 14 and didn’t think it was in any way remarkable. I don’t know why grown-ass people have such trouble finding their seats in a modern ballpark. It shouldn’t be any harder than finding your room in a hotel. And they don’t even have ushers!

OK, end of side story and back to the observations at hand.

The Orioles have a player whose last name is Santander, which looks simple enough. The snag is that it’s pronounced “Sahn-Than-DARE.” It’s too bad because this is a name that’s tailor-made for the Baltimore accent. “C’Moon, Sain-TAIN-der! Lets Gewoo Ayooze!” (In actual English, “Let’s Go O’s.”)

Hackwhacker, back me up here!

The Rays have a player named Roman Quinn, which is completely unremarkable other than that during one of the middle innings, he hit a pop foul off the upper deck facing to my right. The ball bounced down, kicked off a seat back, and floated right down the walkway in front of me about eye-high. I reached out and snatched it as easily as plucking a can of peas off a store shelf. Harking back to my Little League baseball and beer league softball training, I used two hands because these things spin like crazy. But the only thing really running through my mind was “Don’t screw it up don’t screw it up don’t screw it up.” 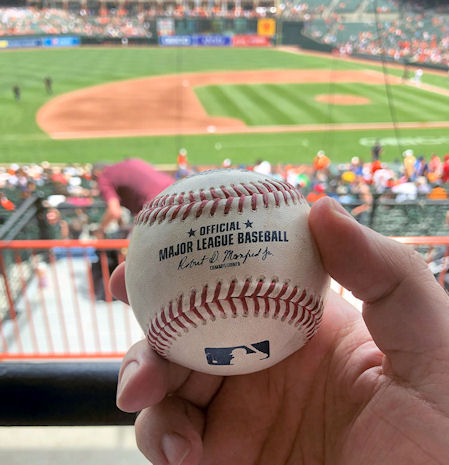 This was the second foul ball I’ve caught at an O’s game. The other was a big bounce off the warning track when I was sitting down along the first base side. I have a long history of pursuing stray baseballs, foul or otherwise, and wrote about them in 2009.

The best part is that there was zero competition for the ball. I was on the aisle and sitting beside a couple of old ladies. There were no kids anywhere around, so I didn’t have to feel guilty about keeping it. So into my pocket, it went.

Of course later, due to the general cramped quarters found in grandstands, I could feel the ball bumping against the leg of the lady to my right. I kept expecting her to ask me, "Is that a baseball in your pocket, or are you just glad to see me?" 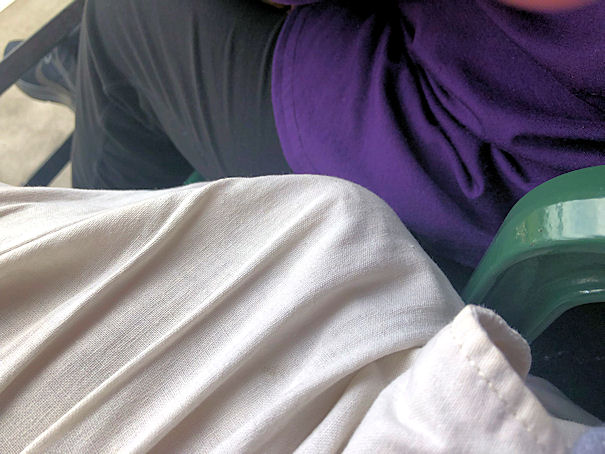 The Orioles have a female ballpark announcer now. This is her first year. Now, I’m in favor of a woman doing any job a man does and this is included. But that doesn’t mean it doesn’t sound a little weird to me. I’ve seen 209 major league baseball games in my life and 207 of them have been announced by men, so I’m more than a little conditioned to it. And a lot of it is the jacked-up enthusiasm that just founds fake to me. Like drawing out the names of the home team players? Everyone does it, I know, but now it sounds like a mom trying to hype up the potato sack race at her kid’s birthday party. It’s a “me” problem, I agree. I’ll get used to it with more exposure.

So, round about the last inning, it was time for Trey Mancini’s last home at-bat as an Oriole. There was a nice ovation for him and he seemed to enjoy the moment. Then, with a guy on second, he hit a fly ball to right field. I figured the runner would tag up and he’d end his day with a nice sacrifice fly. However, the right fielder lost the ball in the sun, which then caromed off his face and rolled into the right field corner. Trey hauled ass around the bases and ended up with an Inside the Park Home Run. It must have been the Beauxbatons because this was truly magical! Well, except for that outfielder’s face. I bet that stung for a while.

I’ve seen a lot of shit at ballgames… I’ve seen grand slams, tape-measure dingers, I’ve seen a guy steal home, but this was a real first. The place just went nuts (well, as nuts as a mere 16,000 fans can go), and called Trey back out for a bow. What a last moment for the guy.

So, the moral of the story? Maybe I should get out of the house more often.

*I hate to even explain but just in case, The Beauxbatons School of Magic is from Harry Potter and the Goblet of Fire, the French magic school that visited Hogwarts, wearing that shade of blue.

I've never caught a ball. I've had my ponytail pulled because I was cheering for an opposing team to the man next to me. and then he hit me. boyfriend was getting a beer and going to pee so he was not there to swoop in. That was fun. I sat down and was quiet. We won the doubleheader so he got his karma. :-)
Can you explain the song, Thank God I'm a Country Boy in the city of Baltimore? It's doesn't fit.
And my friend who was a flight attendant would say you'd have a CEO of a company who you would like to think are smart. But apparently the plane doors suck out their brains and would ask her, "Can you tell me where my seat is?" She would always tell me she wanted to say, "there is a number and a letter, you are smart enough to figure it out sir" But of course she never did until her last day. She really did it!! She told me she said it with a smile and he was stunned and said nothing. Her peers had to all gather in the galley because they were howling!!

Peg,
I can't imagine the kind of asshole it would take to hit a woman because she was rooting for another team. (Or any other reason, to be frank.) I know tensions can run high during a game, but I always figured that was more from football and hockey. There are 162 baseball games per season... You lose one? You play another the next day.
Many moons ago, I got pretty pissed at some chick in the row in front of us at a football game, I believe it was in Cincy. Every time the Bengals did something right, she'd shake her ass in our faces. I told my brother that he should give her a dollar the next time she does it.

I think they play TGIACB because Baltimore has always felt like a hick-outpost compared to their division rivals the Yankees and Red Sox.

Last days on the job rock. At that point you are bullet-proof.