First of all, I’d like to thank all the commenters on the last post on abortion and sex education, for their reasoned, rational, intelligent and personal responses.  That’s what makes me love writing for all’a yinz.  Now onto my usual pointless crappola…

Search for Reality
Let’s hit a couple recent Google searches that led people to this site.  As you may know, this kind of thing greatly amuses me.

Apparently the Indian Aunties theme is still rolling, but more so early last week than now.

After the last Ratbirds game, in which they got a couple of iffy penalties, I found this search:

I guess they were looking for validation here.  Yeah.  Right.  Move along… nothing to see here.  Allow me to answer in the form of a search:

Meanwhile, a certain Steeler has a fan from the East:

I guess they’ve seen the commercials.

The Alannah Myles theme is still rolling.  But now a twist:

I have no idea what to make of that.  But I’ve saved the best for last.

You may recall my posting a story about betting the horses at the Maryland State Fair and having my bets messed up by two jockeys, brothers Christopher and Wesley Ho.  I had great fun with their names, at one point wondering if they had a brother named “Stanky.”

Well, someone did a search for stories related to the Ho brothers… And when she commented on the story, it turned out to be Momma Ho, herself!   You probably never saw her comment because she didn’t place it until about 3 weeks later.  But I think it should be seen so here it is:

I just have to say I was laughing my ass off when I read your blog! I am "momma ho"...yes, the mother of Wes and Chris Ho, the jockeys that screwed you out of your money. My title (was) given lovingly by the best friends of the kids. The races are great entertainment and your blog describes it to a T. Your sense of humor must be applauded! I loved the race announcer when one of the boys won he would say to the crowd "can you say hooooo". Better Luck next year!”

I responded as follows:

“Anonymous Ho,
I'm glad you enjoyed, and am glad you see it's all in good fun.

At next year's Fair, I'll be sure to put a few bucks down on the Ho's.”

Momma Ho… Unbe-freakin-lievable.  It just goes to show that, like multiple presenters said at Podcamp, if you write about someone, they WILL find out.  Or their mama will.  I’m greatly relieved that she enjoyed the post and got what I was trying to do.

F-Bombs Away
I wrote a post earlier this month in which I presented the “Cherry on Top” Award to 5 of my closest blog-friends.  Even though she’s already received that particular award 3 different times, Kansas pixie One Crazy Brunette (aka CB) took umbrage to the fact that she wasn’t among the winners.  I promised her that I would create an award just for her.  CB, today is your lucky day.

If you’ve ever read the CB, you know that she swears incessantly.  She goes into a dive bars, sailors come running out, going, “The mouth on that broad.”  She uses the “F-word” the way Paul Bunyon used an ax.  She’s a 5’ artiste, in stiletto heels.

So to celebrate the ball of vulgarity that is the CB, I present to her: 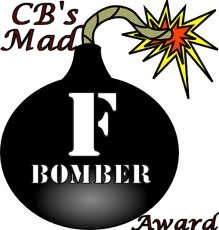 Most blog awards come with rules.  I don’t like blog rules and rarely obey them.  Nobody tells me what to do, not even me.  And with CB, I don’t even expect her to obey even the Law of Gravity, let alone something I make up.  So instead, I make this suggestion:  To accept and post this award, CB, please describe the time you dropped an F-bomb when it was most inappropriate.  I’m picturing your wedding vows:

Church Official: Do you, CB, take Mr. CB to be your lawfully wedded husband?

So, dear CB, this is the only award of its kind.  You may keep it all to yourself, or pass it on as you see fit.  Heart your face, hooker!

Email Goodies
I got a cool email from Sitcom Kelly last week.  Anyone that’s one or has ever seen Facebook will appreciate.  It’s called “If Facebook Existed Years Ago. 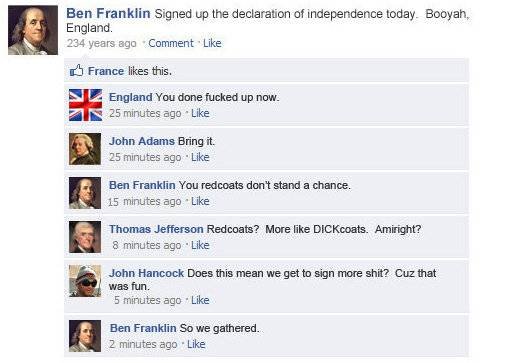 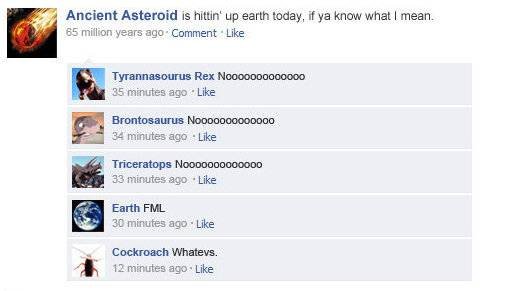 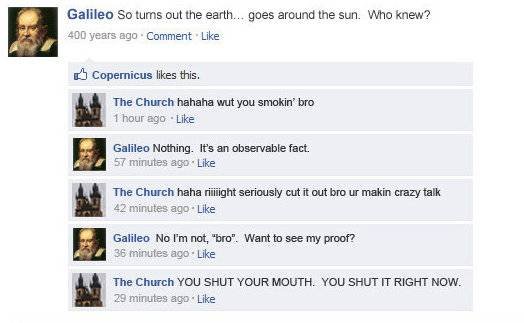 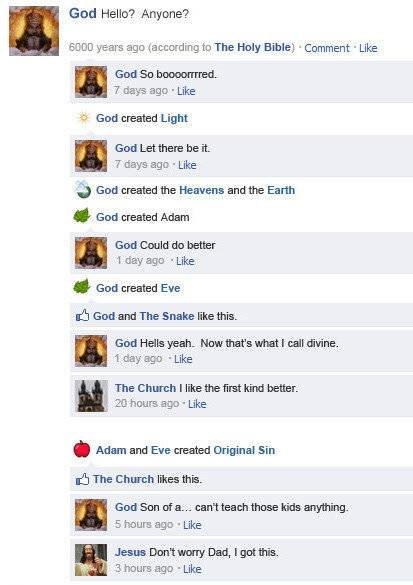 Momma Ho is awesome. I love that she's surfing blogs looking for her sons' names.

And by the way, I just got here by Googling Justin Bieber, Myron Cope, and Stink Bugs. Took me right to you. Top of the list. Who knew? Never would have found your blog without it.

AWWWW! Bluz I fucking love you!!!! I'm posting it immediately!!!

(I GUESS I'LL POST A STORY TOO... but know that I wouldn't do it for ANYBODY but you! I'm totally doing it NEXT week though.)

It doesn't happen very often, but what really pisses me off is when someone leaves a comment on my blog, and they have NO PROFILE, so I have no idea just who they are!! They could be stalkers or serial killers for all I know!

Bagger,
That cracked me up... it's such a "mom" thing to do. Maybe the Ho boys ought to start their own blog. And obviously, it was the Myron Cope search that brought you here. And that's funny too, because I had 2 searches for Mahrn this week show up.

CB,
Do as you please with it, ya whack-a-loon. It's all yours. Believe me, you earned it.

Judie,
If you haven't already, you should hook up a hit-counter service like StatCounter. Even if people leave anonymous comments, you can see where they came from and often times, if they've been there before.

Regardless, don't sweat it. This is the internet. People can find you by all kinds of crazy means. It's part of the deal...

You made me laff my fuckin arse off today. Thanx (over from CB)

This entire post was hilarious! Are you sure you don't want to do stand-up in L.A.? :) Loved the F-BOMB award and the stuff from Sitcom Kelly too! Great stuff, Bluz!

Oh my.. I have never seen the facebook thing.. that's hilarious!!

I got that same e-mail in my inbox, too, and sadly, I immediately thought of forwarding it on to you! HA!

That FB stuff is awesome! So funny. My favorites are the cockroach and that the church "likes" Original Sin. Hee hee :)

Scots Lass,
Thank you for visiting! Any friend of the CB’s is a friend of mine. Come back any time.

Cher,
I’ve had a long, secret dream of doing stand up, but I know myself well enough to know that I’m a much better writer than speaker. The most finely crafted joke will fall flat if it’s not delivered properly. I stumble over my words, lose my train of thought… I’d be Ground Zero for hecklers.

And Sitcom Kelly is a vast source of material, in one way or another.

Jennifer,
I strive to bring you only the finest in pirated joke email material.

Cassie,
I can’t believe you didn’t use it yourself, especially as the Reigning Queen of Facebook. I am really the only one in search of cheap post ideas?

Cristy,
Sure… original sin put The Church in business: “All people are sinners, therefore all people need The Church.” Great for business.

I loved that the icon they used for God is the one from “Monty Python and the Holy Grail,” and they one they used for Jesus is the Buddy Christ from “Dogma.”

OK, here is what just happened:

1. Read the "If Facebook Existed..." bit.
2. Almost wet pants (literally).
3. Forwarded this post to The Guy.
4. Called him at work.
5. Demanded that he read it NOW NOW NOW NOW.
6. Almost wet pants again when The Guy almost wet HIS pants.
7. Agreed that we like the "Darwin" part best.

Bachelor Girl,
Even though I didn’t write that bit, I’m glad I could function as your entertainment gatekeeper.

Wow, that Facebook nonsense was the most fun of my life.

Geez, Mundane, you I thought you got around...

Alannah Myles (real or stand-in)
I don’t give a rat’s ass. That’s why I mentioned it... I thought it was a weird thing to search for and I wonder why the searcher landed here, especially since I’ve never written anything about it.

In March I ran some pictures I took back in the 80’s and in the last month or so, have been amused that I’ve been getting a lot of search traffic for “Alannah Myles.” Either something happened recently that made people start searching under “Alannah Myles”, or they’ve always been searching and The Google just caught up with my post.

Either way, I don’t care about her (or anyone’s) faith. I ran some pictures because she’s hot and talented. And judging from the website you linked, I'm glad she's putting out more music.