As promised and after much harassment at Podcamp, I’ve dipped my big toe into The Twitter pool.  I signed up Friday night, immediately after my last post.  I figured, what the hell?  I still had 40 minutes to kill before it was TV time.
A’course, I ran over anyway.  Like you may have warned me, once you start, you can’t stop.  I don’t know about that, but if I was going to Twitter, there were a number of things I wanted to get nailed down right from the start.
Aside from finding some people to follow (and using Jedi Mind Tricks to make them follow me) I wanted to get that “Follow Me” button on the blog.  I was comfortable with the mechanics, but the problem was that the colors did not go with my layout colors at all.  Could barely even read them.  (Navy Blue on Black = No Good.)  But rather than have some kind of color-choice menu from which to choose, you had to enter the digital number that represents the color.
Right… like they have that on the crayon box.  But being a semi-resourceful dude, I looked it up on The Google and came up with something approximating “yellow,” but is technically “egg yolk.”  Anyway, I was proud of myself for handling the curveball. 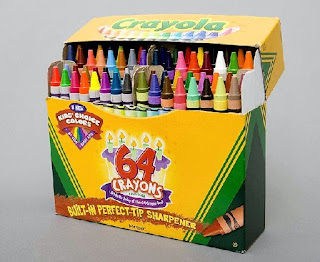 I so used to love getting a brand new big box of crayons!  They should make a perfume with that "new crayon smell."
So, if you Twitter and care to see my attempts at forced brevity, please click the “Follow Me” button on the second section from the top on the right.  And if I’m not following you already, feel free to leave a comment below with your Twitter name and I’ll return the favor.
Oh yeah; Twitter names.  Someone had already taken “bluzdude” and “bluz” so I had to improvise.  My Twitter name is “DarwinfishBluz.”
Birthdays
This was a good week for famous birthdays.  On Wednesday, my Queen of Rock and Roll, Joan Jett turned 52.  Then the next day, The Boss, Bruce Springsteen turned 61.  I find it cool that they have birthdays back to back… two living breathing icons or rock and roll.  And both are cusp babies.  Joan was born on the last day of Virgo and Bruce is on the first day of Libra.  (As Jessica R and I can attest, Libras rock, ‘cause we’re all balanced and shit.)
The Mojo Boogie
The Steelers are playing opposite the Ratbirds today so I have to go to a sports bar to see the game.  I always go to one near me called Jilly’s.  They know me there so it’s always fun to sling shit with the regulars.  It’s technically a Ratties bar but they have all the games on and there’s always a good cross section of fans for other teams.  The only downside is that the audio is always for the Rats game, so you really have to pay attention to the screen to follow what’s going on.
This will be my first game there this season so I don’t yet have a track record to go on.  I’ll just had to pull something out of the old closet and we’ll see if it works.  Last week my white polo with black piping worked while I was at Podcamp, which I selected because the Steelers were away.  But had I known they were going to be wearing black that day, I’d have worn my black polo with white piping.  This week, I expect the Tampa Bay Buccaneers will do the same thing and make the Steelers wear their black jerseys in the heat.  So I’m going with the black.
It occurs to me that if my white polo worked last time, it should work again today.  Don’t think I haven’t taken that into consideration.  The thing is, I was not in one of my usual watching places, like my living room, or Jilly’s.  Sometimes I have to watch a game on the fly… a friend’s house, my brothers, some other bar…  These options carry their own mojo and it would be a mistake to base today’s game-gear decision on a situation with such a variable.
So today, I’m going with the black polo with white piping, Steelers socks and my new hat I got from Honus Wagner’s last weekend. 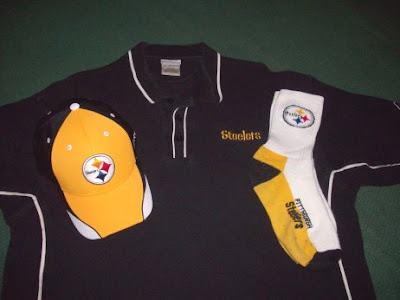 Granted, if the Bucs upset the Steelers, I will know that I made an obvious error and should have gone with the white polo again.  But as Chris Berman says,  “that’s why they play the game.”
I’ll also try my hand at texting in a few tweets, to see how that works.  But on my old-ass DumbPhone, I may start a tweet at kickoff and it’ll be the 2nd quarter before I’m done.  So don’t expect anything resembling “timeliness.”
Posted by bluzdude at 12:00 PM

Ok I'm following you on Twitter now. The only reason I say this is I'm hoping you are better at it than I am.

Hey Bluz... you know you can use any image whatsoever for your follow me twitter thing? Just add a picture widget with your direct link http://twitter.com/DarwinfishBluz (at least that's what I did, and I think it works?)

I agree with you on the joys of opening a new box of crayola... Almost as enticing as a fresh pack of hockey cards, and that stick of gum. You remember that stick of gum? I'd love THAT perfume so much!

I only dabble in Twitter--too much of a timesucker otherwise. It amazes me how much time some people spend on it. At some point, they'll all need rehab.

Christy,
I don't know what will constitute "better," but I'm going to try to just weasel my way through it. Maybe it will work, maybe not.

Miss Nikki,
I remember the bubblegum from my childhood packs of baseball cards. That's what I used to collect. It was probably the same gum. I used to love that smell too. It's a damned shame that they pulled it out, just because the collectors complained about staining the card. I used to collect because I loved baseball, not because I thought I could retire on the proceeds.

Sherry,
I'm going to try not to get drawn into the time-suck. I have enough pulls on my time as it is. But if that many people think it's indispensable to growing a blog, I'm going to give it a shot.

TWITTER! NOOOOO! I think I still have an account. The hell if I can remember my dang password, though. You should update your facebook status more. Or make a fan page for that. You're funny. :)

Yes, Cassie, the pressure was intense.

Facebook... meh... I'm just not seeing the value. I hardly even log in anymore. I mean, once you've found out what your old friends are up to, what's the point?

Glad the revised mojo worked--I was getting sick and damn tired of everyone down here bragging up the 2-0 Buccaneers. Knuckleheads were already building a pedestal for the Lombardi.....

Dick,
They were planning the same thing in Baltimore, up until the Bengals whacked them. But now that they've beaten the Browns, I'm sure they'll be replanning the parade route.

Your mojo was enough to turn a 35 year old, 4th string QB into a phenom. The announcers actually referred to him as "mobile". Charlie Batch. Next weekend should be fun. Don't go and get yourself all killed or anything.

Cher,
Just don’t get your hopes up… I’ll probably save the quality stuff for the blog.

DG,
I may have found my "Jilly's" shirt for this season... at least until they lose. So far I've worn 3 shirts for 3 games and they've won each. What I don't know is whether the mojo will hold, matching shirt to location, or will it be another season of one-offs, like last year.

I LOVE the smell of a new box of crayons. Why is it so intoxicating?

And I agree. We are extremely balanced.

I think it's time we started celebrating our birthday weeks, no?

And so why aren't you following me yet? Hmmm?

just kidding. found you & following. I'm a locked/private account, so you'll have to wait until I "accept" you. which you know I'll do in a heartbeat. :)

Jessica,
It’s been a while since we’ve had a birthday on a weekend, no?

As for the crayons? I think they put crack in the formula, down at the Crayola factory. No other explanation. Same with Play Doh. Good thing they didn’t make it taste the same way it smells. Kids would be pooping in Technicolor.

RPM,
Regarding following you, (and this coming from someone that hasn’t even put me on her blogroll after all this time), I did look on all my favorite blogs for Twitter buttons (yours included) and followed those immediately. I haven’t done that many searches out of whole cloth, but now that I know you’re on The Twitter, I’ll look you up and follow. No wait, if you’re following me, I’ll get the email and follow you back from there.