Since my last post on the odd Google searches that have led people here, I’ve turned up several more.
First of all, Alannah Myles is still running strong.  On Friday alone, I got hits from Bosnia and Herzegovina, and also Bad Vilbel, Germany.  Today, La Cannet, France was added to the mix.  Miss Myles, if you’re still out there… your fans are interested!  Time for a world tour!
I got my first hit from Qatar yesterday, (a guy that I now call my “Qatar Hero”), searching on “pictures of hot South Indian bras.”
Oh my.  Now I have to wonder if there is a difference in bras between North and South India.  Seems like this is becoming a niche of niche porn.  What’s next, “hot Southeastern Indian aunties bras”?
By the way, the original bra picture appeared in this (very short) post from March 2009.
Then someone came from India, searching on “Bengals Stadium.”  I’m wondering if they were looking for an arena that featured real tigers… maybe Siegfried and Roy Stadium or something.  The only tigers they’re going to find in Bengals Stadium (actually Paul Brown Stadium) are little pussycats. 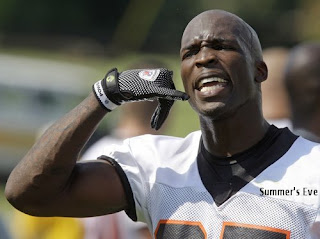 Fear the Turtle*
Sitcom Kelly sent me the most delicious email this week and I feel duty-bound to post it.  Normally when I see “recipe” posts in blogs, I kind of bloop right over them.  But not this one.  Even if you’re a vegetarian like Sitcom Kelly, you won’t be able to take your eyes off of this, even if only to satisfy your morbid curiosity.
Presenting: the Bacon Cheese Turtle Burger!
“Handmade ground beef patties, topped with sharp cheddar cheese, wrapped in a bacon weave.  Then add hotdogs as the heads, legs and tail.

Place on an oven rack, covered loosely with foil and baked for 20-30 minutes at 400 degrees.  A little crispy, not too crunchy...just how a turtle should be, no? “ 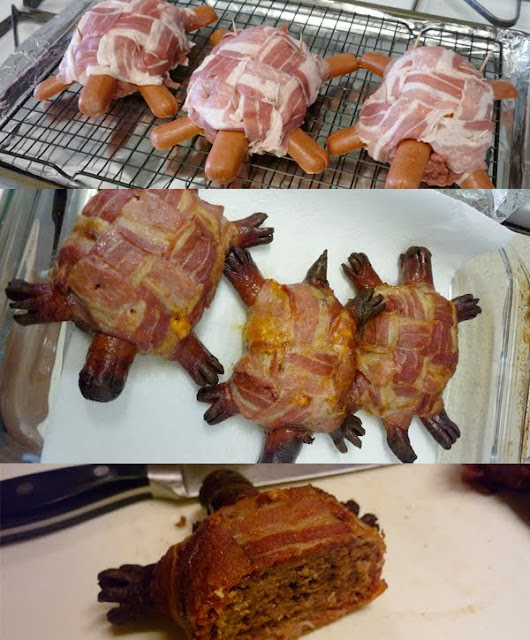 O.M.G.  I must have one.  Preferably more than one.
I love how they took the time to split the “leg” hot dogs to give the appearance of toes, upon completion.  And how they whittle the “tail” down into a point.  I wouldn’t even use a bun.
*  BTW, “Fear the Turtle” is the battle cry out here to refer to the Maryland Terrapins.  But if I were tailgating as a visitor at a Maryland game, these would definitely be on the menu.  The only thing to fear with these is a heart attack.
While the directions say to cook them in the oven but I bet you could do them on the grill just fine.  For specifics, I may have to consult with noted Grillmaster, Still a Dog.
Who Let the Dog Out?
Speaking of Still a Dog, on Thursday I got to meet another frequent commenter and esteemed blogster in his own right.
You may recall that back in August, I posted about seeing an O’s game with Sitcom Kelly, and mentioned that the next game would be 9/2 against the Red Sox.  Since I had some extra tickets and my usual cast of characters were unavailable to come out and play, I asked the Dog if he could come out.
The Dog, who works just north of the city, was able to get his wife to sign his permission slip, so he took the light rail down to meet Kelly and I for the Orioles game.
Usually when the Red Sox are in town, their fans pretty much over-run the place, but for this series, they hardly drew at all.  I mean, there was still a considerable amount in attendance, but the Yard was still only half full at 26,954.  The preceding two games only drew about 18 thousand.  I attribute the fall-off to the Sox not being in contention this year.  But I’m not complaining.  We had plenty of elbowroom out in left field.  The O’s went down 6-4 but a good time was had by all.  And Sitcom Kelly finally had someone with whom to drink the “good beer”, rather than my Miller Lite-loving self. 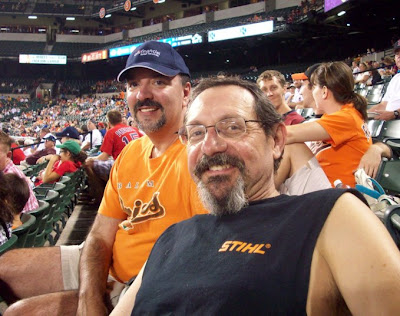 The Dude and the Dog.
And now, for your consideration, a week ending cartoon, courtesy of First Door on the Left: 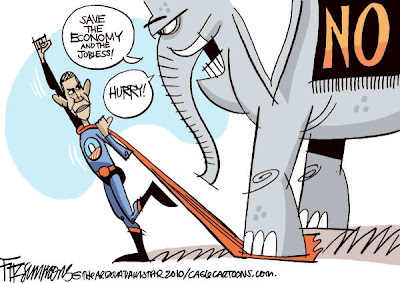 Happy Labor Day to all and a great big Happy Birthday to my baby Bluz Sister Annie who turns forty-(cough-hack-spit) today.  Now be glad that I’m not posting that picture of you I just unearthed, with the 80s hair and the high-waisted jeans, posing it up with that can of IC Light.
Posted by bluzdude at 11:39 AM

I think I had a heart attack just looking at that turtle burger thingy! OMG does it look good thou!

No question, it's a heart attack on a plate. But what a way to go! A bacon-induced coma!

How clever is that?? I can feel my cholesterol number going up, but I am definitely going to make some of those for a party!

I can feel my HDL spiking, just looking at the picture. Maybe I should put a Surgeon General's warning on this post.

Ha! That guy at the game looked more like Stihl-A-Dog! Or Mitch Miller!!

I think those turtles would be great in a smoker. Hell, if I didn't have 5 racks of pork ribs ready to smoke for tomorrow I'd get a couple turtles ready to go right now!

Not sure if any of you checked out my post on Steel City Slant called My Balls Are Smokin' where I did Moink Balls (half moo, half oink) here's a link http://steelcityslant.blogspot.com/2010/04/dog-my-balls-are-smokin.html
but they're similar to turtles without the weenies.

Since that post I have done Boinks (buffalo & bacon) and have plans to do Doinks (venison & bacon). And you know damn well I am going to try to make these turtles.

Hey Sitcom Kelly, drag Bluz's ass out to the sticks where I live and we'll have some smoked turtles! We'll roast some cauliflower for you since you don't eat turtle meat. And we'll serve the "good beer" from the fridge of the Dog!

Folks I got to say Bluz & Kelly are a couple of the nicest folks I've met in a long time. We fell into conversation like old friends. It was great to meet them.

Was great to meet you to, Dog. You're obviously a champion breed!

I have to say that the turtles look absolutely delicious. The problem is, I CAN'T EAT THEM!!! It would be heart attack central in my chest. And with my family history, that's entirely possible.

Christy,
I'll be sure to let you know how they turn out... Because I have to try these things. Although Still a Dog will probably beat me to it.

Cowboy,before you actually try one of those lovely and clever creations, will you ammend your will to include me? Just askin'

Judie,
Like I have anything a woman with your taste and refinement could want...

I will need a good home for my 6' Darth Vader cardboard standee though...

Popped over here when I saw a comment you left over at CB's blog saying you were hung like a baby. No I'm not a perv. I found your comment terribly clever, so I came here to scope your blog. I must say it offers such variety, is witty, interesting. I read every word. My blog, however, probably won't be terribly interesting to you, mostly mommy-blogger, mostly crazy, antagonizing bitch but with a smile as I antagonize.
Anyway, wanted to acknowledge your talent as a writer....oh, and wanted to say that that meat turtle is wrong and carcinogenic on so many levels...my husband will love it!

Sandra,
Well thank you for visiting. You know that when you say that many nice things about me, I just have to invite you back!

If you'll note my blogroll, you'll see that a great many of my blogger friends write mommy/family blogs. I look at them like an on-line reality show. It's fun to check in on other people's lives, so I'll absolutely come and visit your blog.

And I totally can't wait to try the Turtle Burger! The carcinogens are what make it great!

Hot dogs, burgers, and bacon are my three main food groups, sooooooo . . . yeah. Making these for dinner tonight. And every night after.

Just looking at the turtle concoction gives me the meat sweats!

That's one way to get your husband to lick your neck...

Well the turtles were a brilliant creation! My kids would love this if I surprised them wth it one day. Thanks bluz!

Who says cholesterol can't be fun?

That turtle burger dog thing... Yum! Paired with a cold beer you got yourself a gourmet meal there Bluz. A gourmet mmmmmeal!

Miss Nikki, you are obviously a woman of refinement and good taste.

Dude and Dog make a handsome duo. Good beards, beer and baseball. What more can you ask.
Remember when Turtles were candy. Times do change, not necessarily for the better. The hotdog legs are really out there. And if the cook has time to do that bacon weave, he or she has tooo much time on their hands.

So sayeth The Vegetarian… I consider the bacon-weaving to be time well spent.

Turtles are still candy… and one of my favorites. I wonder if there’s a way to combine them with the Turtle burgers…

Anonymous Mom,
Maybe if you gave me Pop Tarts once in a while, I wouldn't crave food that's so bad for me...