After the last session, everyone gathered in The Hub for closing remarks.  I don’t remember what any of them were, except for the announcement that the after-party was going to be at “Red Star”, a place across the river in Station Square. 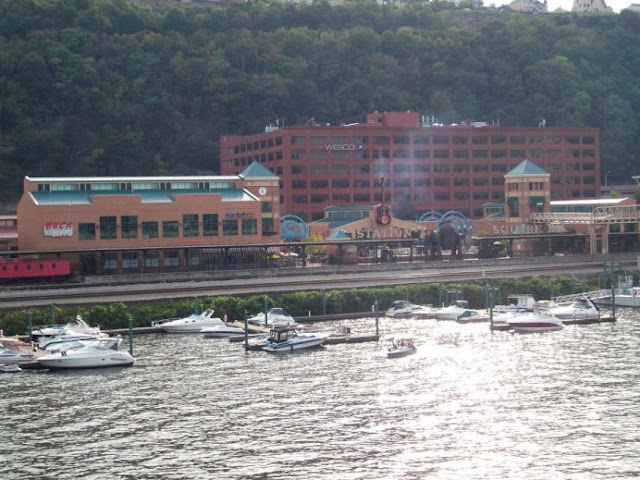 Station Square as seen from the Smithfield St. Bridge.

Wormy told me that the name has actually been changed to “Bar Louie.”  Once I figured out that Station Square was still within easy walking distance, I relaxed considerably.  I hate bumming rides, waiting for cabs, and I was already determined not to unpark my car, so this came as a relief.

I went back to my hotel to clean up a bit and to drop off all the crap I’d been toting around all morning.  Then all I had to do was stroll down Smithfield Street, cross the Smithfield Bridge and Station Square was right there.  I figured this would give me a prime picture-taking opportunity and I was correct. 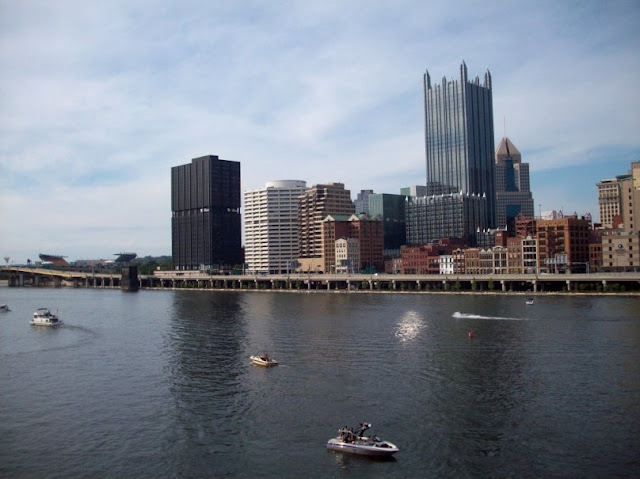 Downtown Pittsburgh as seen from the Smithfield St. Bridge. 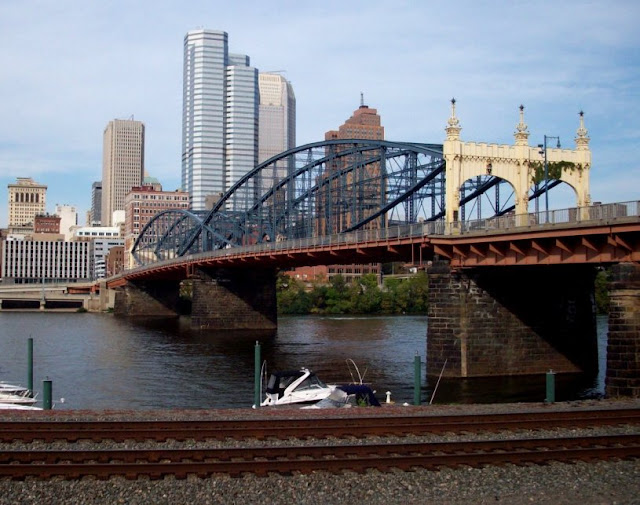 The Smithfield St. Bridge as seen from Station Square.

I found Bar Louie easily enough, but there didn’t seem to be many people there…no Podcampers, anyway.  I figured I had some time to kill, so I walked over to where the shops were and spent about 20 minutes going through Home Towne Sports.  They had even more Steelers and Penguins shit than Honus Wagner’s.

As I returned, I noticed that Bar Louie had a back entrance.  Still, I went back to where I came from, at the front of the place.  I figured that’s where people would gather first.  But there was still no one there, so I took a seat at the bar and ordered a beer.  No sense wasting serious bar time.

A couple minutes later, I got a text from Gina from My Very Last Nerve, another Pittsburgh blogger that I’d corresponded with but never met.  She asked if I was there and said she and Michelle (from Burgh Baby) wanted to meet me.  I texted that I was here, and where was she?

This went back and forth a couple times… her saying she’s in a booth on the other side of the bar.  I’m standing up and looking around and going, “I don’t see you… Come get me!”

In the middle of all this, I’m also getting texts from Carpetbagger, wanting to know where the hell I was.  Eventually Gina found me.  It seems there was this whole other room and bar in the back (hence the back door I saw earlier) and the Podcamp party was back there.  Apparently that’s where Red Star used to be… Bar Louie took it over.

Everyone was finishing up their meals so I got a late start on the eating.  No worries, long night ahead.  And I got to spend some quality time with some more new friends. 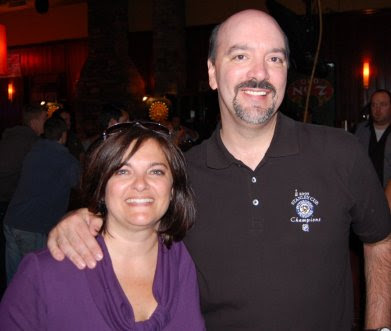 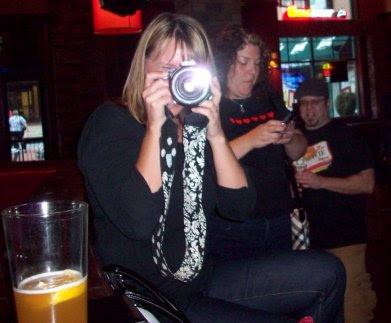 Michelle shooting me shooting her.  I swear the girl always has something in her hand… a camera, a phone, or a drink.

Then it was time for the traditional 6-4-9 shot.  At the closing session, Justin explained that this it a Podcamp ritual that everyone take a shot that’s made by selecting the 6th bottle from the left on the top shelf, the 4th bottle from the right on the middle shelf and the 9th bottle from the left on the lower shelf, then mixing them together into a shot.  The beauty is that it always varies from bar to bar, from year to year.  About 38 people volunteered for the shot.  I’ll shoot pretty much anything, so I was game.  I have no idea who paid for them.

It turned out to be kind of underwhelming.  The bottles chosen were Apple Pucker, Berry Pucker and lime juice.  The shot tasted like a liquid Sweet Tart.  If it were me, and I just learned the choices, I think I’d have called an audible and dodged the lime juice… maybe try a 6-4-7 instead.

I stuck to beer the rest of the night.  I also got to meet some more people, including “Dudders," who looked to be about 6'1".  She was a friend of Michelle’s and mostly a Tweeter.  I don’t know what was with all the tall chicks this weekend… that’s 3 in one place.  I’m not used to seeing that much height in girls, let alone so much at once… between Dudders and Tall Cathy and Secret Agent L, it was quite a spectacle.  Dudders reminded me of a taller, pony-tailed “Phoebe” from Friends.  Here, see? 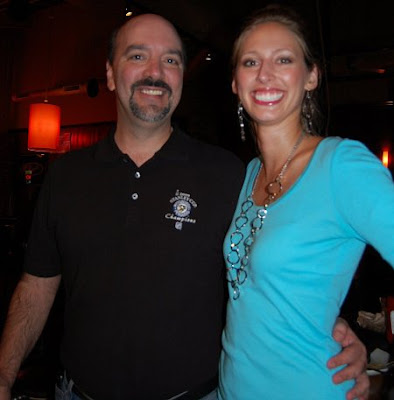 Dudders and I, being tall. (Pic by Gina)

There was also much fooling around.  For some reason, Dudders, Gina and their friend Adrienne felt it necessary to show me their impression of a penis. 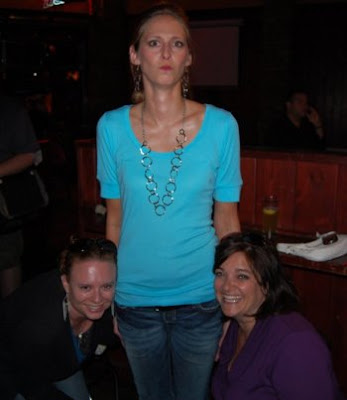 Dick Impersonations:  Call them for your next party. (Pic by Gina’s camera but I snapped it.)

I stayed at Bar Louie’s until about 9:00, then headed back to the room.  The walk back across the bridge yielded more opportunity for cool pictures: 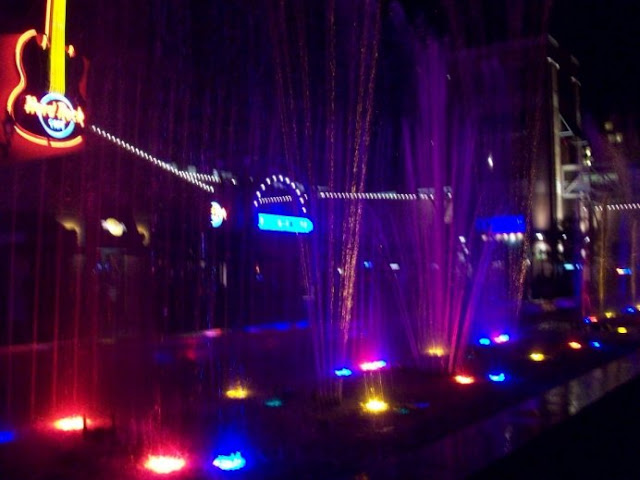 The fountain in front of Station Square. 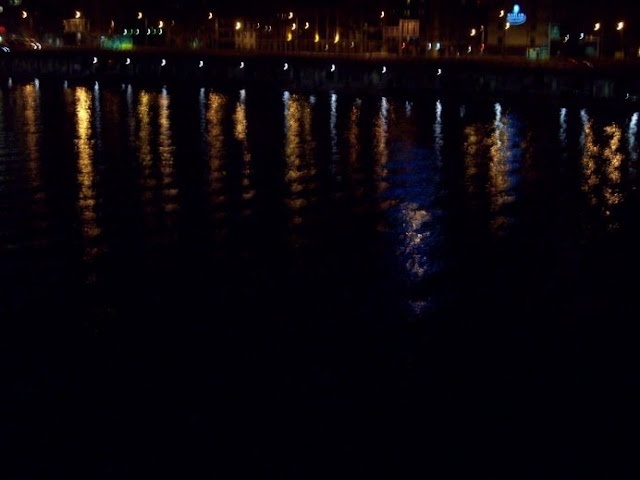 Colored lights along the Allegheny River, shot from the Smithfield Bridge. 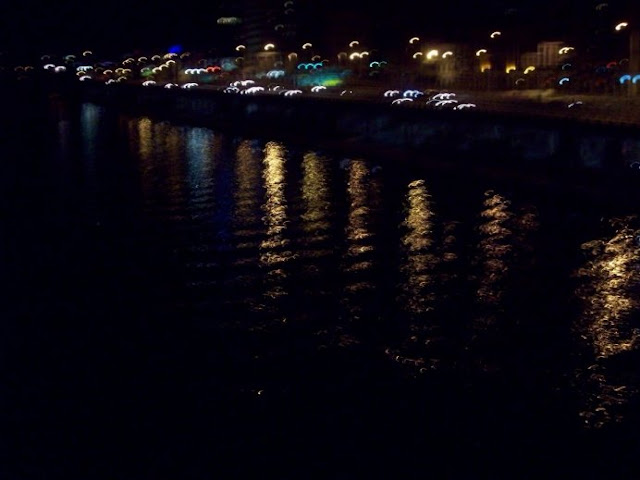 This is one time where having lousy focus actually improved the shot.

Back at the room, I poured a couple of stiff Crown Royal on the rocks, and was in bed by 11:00.

I felt great in the morning and from what I could gather from the rest of the room, I was one of the only ones that did.  There were some ass-draggin’ people, I tell you.

The big news from the Welcome Back session was that someone lost their dongle.  Norm then whipped out the old dongle, which apparently is some kind of electrical cord apparatus.  It sounds to me like it’s a cross between a donkey and a beagle.

Also, in a fit of time-delayed perception, I figured out that the Norm that has been welcoming us each morning is the same Norm that is the curator for Creation Rex, the Dino-blogger that guards the Art Institute.  I made point to tell Norm that I appreciated his efforts assisting Rex, as I’m sure he has a problem typing with those short little arms.

Also, someone mentioned that it was Talk Like a Pirate Day.  I immediately lunged to my feet and shouted, “Oh my God, I can’t believe we’re going to lose 100 games again this year!”

Next up:  Wrapping up the Podcamp Experience
Posted by bluzdude at 8:25 PM

Dongle, eh? Hmm...sounds like a wang to me. To define: dingle, twig and berries, schlong, ding-dong. Dongle.

Stop that, you guys! I want to talk about photos! And not obscene ones, either! Bluz, the pics are terrific! Can I come to camp with you next year??

Oh, big BAD stormin Pittsburgh! 10,000 houses without power until Sunday! Cher called me today to tell me all about it. She can't use her computer.

Looks like a great time! It almost makes me wish I left my house occasionally. ;)

Judie,
Thank you so much. That means a lot to me coming from you, what with being a Rogue Artist and all.

You should definitely go next year… Southwest Airlines from Tucson to Pittsburgh… Do it!

Oh, you know why the power is coming back on by Sunday? They wouldn’t DARE allow the power to be out during a Steelers game… there would be widespread revolt and rioting in the streets!

Raven,
You should come on out! As soon as you’re up to it, of course. Interaction is good for the writing soul.

Who, me? Something in my hands at all time? You couldn't possibly be talking about me! (P.S. All the phone action was my frakkin husband asking 1400000000 questions via text just because he knew it would annoy me. He was right.)

Michelle,
All I know is that you were either taking pictures or fiddling with your cell phone... When you weren't lighting me up for not being on the Twitter.

Don't you just love it when a good photo op comes your way? Love these!

People have no idea how photogenic Pittsburgh is. And I barely scratched the surface. But that's why I have a small camera... I can take it with me more places because you never know when a picture needs taken.

I always think "dongle" sounds dirty. We sell dongles at my company, and it makes me giggle everytime I hear it. And "whipped out the dongle" sounds especially hilarious.

RPM,
That’s one of the things I love about the computer industry… they have such great names for stuff. Between the dongle and the floppy disc, it’s enough to make 13 year old boys (and older) giggle for weeks.

Oh my God, the dick impersonation is the BEST.

Thanks to you, I am now addicted to a blog written by a DINOSAUR in PITTSBURGH.

Bachelor Girl,
Dudders just NAILS the facial expression too. Even though I never thought of a dick looking so pissed, I guess it fits, doesn’t it?

Regarding Creation Rex, be sure to go back and look at some of the older archives… the photoshops are the best!